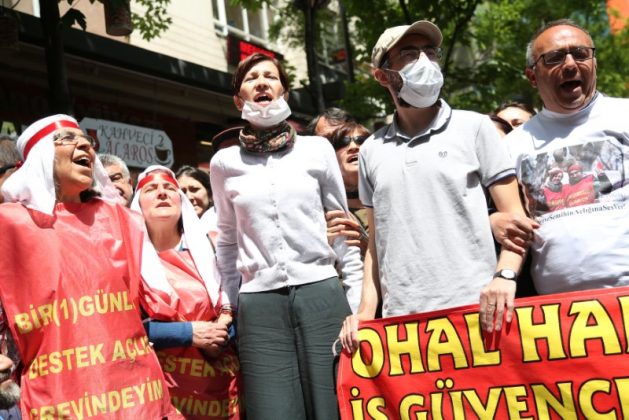 Nuriye Gulmen, a literature professor, and Semih Ozakca, a primary school teacher, who have been on hunger strike after they both lost their jobs in a crackdown following a failed July coup against President Tayyip Erdogan, take part in a protest against a government purge in Ankara, Turkey, May 11, 2017. REUTERS/Alp Eren Kaya

ANKARA (Reuters) – Painfully thin and walking with care after two months on hunger strike, Nuriye Gulmen and Semih Ozakca arrive in a central Ankara square to protest a government purge which has cost them and tens of thousands of other Turks their jobs and livelihoods.

Arriving to applause at their daily demonstration, they don surgical masks to reduce the risk of infection in their weakened state, before raising their left fists in the air and chanting: “Victory belongs to those who resist!”

Gulmen, a literature professor, and Ozakca, a primary school teacher, have been on hunger strike for 64 days after they both lost their jobs in a crackdown following a failed July coup against President Tayyip Erdogan.

Surviving on a liquid diet of lemon and saltwater and sugar solutions, Gulmen and Ozakca have protested the purge with a simple campaign slogan: “I want my job back!”

But their defiance it taking its toll, and doctors say their health is seriously deteriorating.

“Both of them are experiencing issues regarding perception, mood disorders, mental and motor activities,” said Vedat Bulut, board chairman of Ankara Chamber of Medical Doctors.

He said those symptoms were early signs of Wernicke-Korsakoff syndrome, a condition which leads to death in 10-15 percent of patients. “Seventy-seven percent lose their lives due to infections in the long run,” Bulut added.

Gulmen, who has lost 8 kg (18 pounds) and Ozakca, who lost 17 kg (37 pounds), have refused treatment, saying they were aware of the consequences of their resistance.

“We have lost weight, our pulse and blood pressure has dropped, we have problems walking and we are exhausted,” Gulmen told Reuters at the square where she first started protesting six months ago, several months before she stopped eating.

“We were always aware of the risks. We don’t want to stay hungry for another minute. We are calling on everyone concerned to solve the problem with those responsible.”

So far, 145,000 state employees including civil servants, academics and security personnel have been fired since the coup attempt, which Erdogan blamed on followers of U.S.-based Islamic cleric Fethullah Gulen. Gulen denies any involvement.

Critics accuse the government of using the coup as a pretext to purge dissident voices from public institutions.

Victims of the purge complain that the stigma which comes with losing their jobs makes it almost impossible to find work that matches their qualifications.

Job seekers say that potential employers are notified on the social security network that the applicant has been purged – making them reluctant to take him or her on.

Some try to find their own work to make ends meet – selling food on the streets or going from door to door in major cities selling goods brought from rural provinces.

“The doors are closed on you when you are purged by a decree. You can’t be employed. They are trying to discipline people by hunger, by isolation, by shame,” said Ozakca’s wife Esra, who also lost her teaching job teacher.

Gulmen was an academic at Eskisehir Osmangazi University, one of more than 7,880 academics who have been sacked by executive decree without chance to appeal.

Since they started their protest, she and Ozakca have been detained and released more than 30 times. She goes to Ankara’s Yuksel Street and, banner in hand, demands her job back from the foot of a sculpture that features a woman reading the Universal Declaration of Human Rights.

While their protest remains isolated for now, they were joined this week by four parliament members from the main opposition Republican People’s Party (CHP), who staged a symbolic 24-hour hunger strike in solidarity with them.

“We are not only trying to get our jobs back, we are also in a struggle for our honor,” Semih Ozakca told Reuters.

“If we act together, we will definitely win. Our victory will mean the break up of the fear atmosphere the government is trying to create in Turkey.”