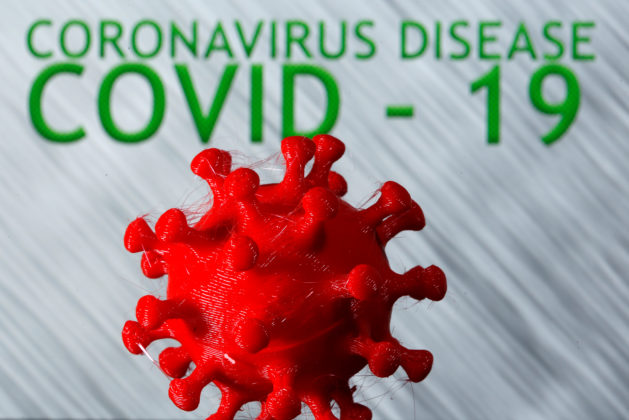 FILE PHOTO: A 3D-printed coronavirus model is seen in front of the words coronavirus disease (COVID-19) on display in this illustration taken March 25, 2020. REUTERS/Dado Ruvic/Illustration

Rising U.S.-China tensions over the coronavirus outbreak have cast the trade deal between the two countries, and proposed talks on a Phase 2 deal, into doubt.

The Global Times said that malicious attacks by the United States have ignited a “tsunami of anger” among Chinese trade insiders after China made compromises in the Phase 1 pact.

WHO officials urged “extreme vigilance” on Monday as countries began to exit from lockdowns, stressing that early studies point to lower-than-expected antibody levels against the COVID-19 disease within the general population, meaning that most people remain susceptible.

Dr Mike Ryan, head of the WHO’s emergencies program warned countries that have “lax measures” in place to be wary of counting on herd immunity to halt the spread of COVID-19, saying: “This is a really dangerous, dangerous calculation.”

Once Australia removes most social distancing restrictions by July, its GDP will rise by $6.5 bln each month, Treasurer Josh Frydenberg was expected to tell lawmakers on Tuesday in a speech updating them on his budget planning.

Britain’s finance minister Rishi Sunak is similarly due to answer questions about the economic response to COVID-19 in parliament on Tuesday afternoon.

There, the focus is how Britain plans to continue the Coronavirus Job Retention Scheme, which is paying employers 80% of the wages of more than 6 million workers who are on temporary leave from businesses affected by the coronavirus. The scheme is due to run until the end of June.

Prime Minister Boris Johnson said on Monday that coronavirus infections had peaked, and that people who could not work from home should return to their workplaces if possible.

The Chinese city of Wuhan, the epicenter of China’s coronavirus outbreak, plans to conduct nucleic acid testing over a period of 10 days, an internal document seen by Reuters showed and two sources familiar with the situation said, with every district told to submit a detailed testing plan by Tuesday.

The city of 11 million people reported its first cluster of new infections over the weekend after a months-long lockdown was lifted on April 8.

These plans come as the global alarm was sounded on Monday over a potential second wave of coronavirus infections after Germany reported that the reproduction rate of the pathogen had risen above 1.

“It breaks my heart,” said Joseph Morpelli, leading member of the so-called ‘stepladder gang’ of ardent autograph-hunters and amateur paparazzi, as he stood across the street from the venue of the canceled Cannes Festival on Monday.

Usually, a hive of activity, the location where Morpelli and his fellow diehard fans could get a glimpse of celebrities walking down the red carpet is now deserted, as the film festival which was meant to start on Tuesday has been called off.

It was only the third time in its history that the festival has failed to take place. The two previous occasions were the outbreak of World War Two and 1968, when France was roiled by violent protests.