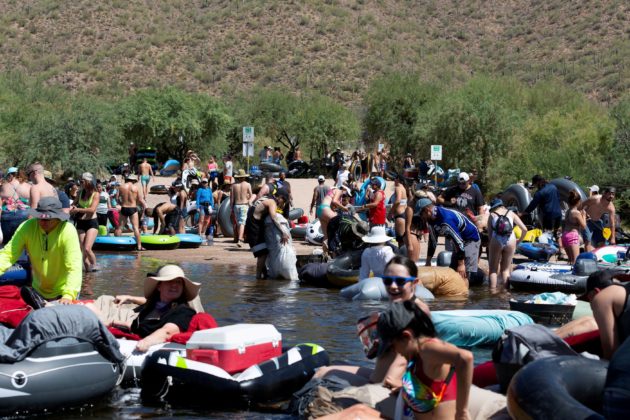 (Reuters) – The United States saw a 46% increase in new cases of COVID-19 in the week ended June 28 compared to the previous seven days, with 21 states reporting positivity test rates above the level that the World Health Organization has flagged as concerning.

Nationally, 7% of diagnostic tests came back positive last week, up from 5% the prior week, according to a Reuters analysis of data from The COVID Tracking Project, a volunteer-run effort to track the outbreak.

The World Health Organization considers a positivity rate above 5% to be a cause for concern because it suggests there are more cases in the community that have not yet been uncovered.

Arizona’s positivity test rate was 24% last week, Florida’s was 16%, and Nevada, South Carolina and Texas’s were all 15%, according to the analysis.

In response to the new infections, Louisiana and Washington state have temporarily halted the reopening of their economies. Washington also mandated wearing masks in public.

Florida ordered all bars and some beaches to close. Idaho was not immediately available for comment.

Nationally, new COVID-19 cases have risen every week for four straight weeks. While part of that increase can be attributed to a 9% expansion in testing, health experts have also worried about states relaxing stay-at-home orders that had been credited with curbing the outbreak.

State officials across the country report the same trend in the new cases: People under 35 years old are going to bars, parties and social events without masks, becoming infected, and then spreading the disease to others.

Cases continue to decline in Northeast states, but some Midwest states that had new infections under control are seeing cases once again rise, including Illinois, Michigan and Pennsylvania.