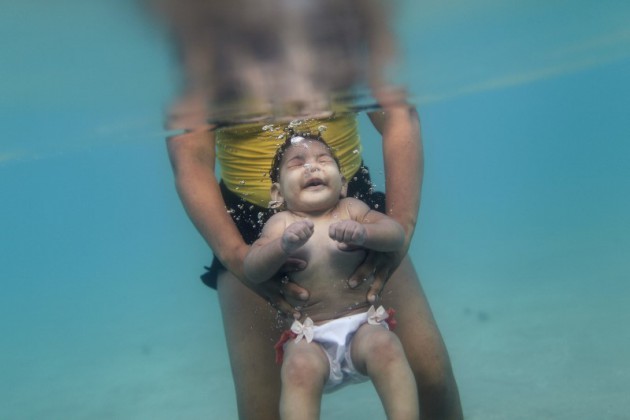 Rosana Vieira Alves and her 5-month-old daughter Luana Vieira, who was born with microcephaly, pose for a picture in the sea of Porto de Galinhas, a beach located in Ipojuca, Brazil, on March 2, 2016. REUTERS / Ueslei Marcelino

By Stephanie Nebehay and Roberta Rampton

GENEVA/WASHINGTON (Reuters) – Evidence mounted on Friday linking Zika to the birth defect microcephaly, and the U.N. health agency set a review of travel advice related to the outbreak of the virus while U.S. officials planned strategy to control the mosquitoes that spread it.

The virus is capable of rapidly infecting and harming developing fetal brain cells, scientists said in a study that provided insight into how the virus might cause microcephaly in fetuses.

The researchers said the study, published on Friday in the journal Cell Stem Cell, does not prove a direct causal link between Zika and microcephaly in newborns, a condition defined by unusually small heads that can result in developmental problems. But they said it does identify where the virus may be inflicting the most damage in developing fetuses.

Zika has been linked to numerous cases of microcephaly in Brazil, where the current outbreak began. The virus is spreading rapidly in Latin America and in Caribbean nations, prompting the World Health Organization last month to declare a global public health emergency.

The WHO on Friday said there is accumulating evidence of a link between the virus and microcephaly as well as a rare disorder called Guillain-Barre syndrome in which the immune system attacks part of the nervous system.

The WHO’s Emergency Committee will meet Tuesday to review “evolving information” and its recommendations on travel, trade and mosquito control in what is thought to be high season for transmission of the virus in the southern hemisphere.

The WHO last month advised pregnant women to consider delaying travel to areas where Zika is spreading.

Travel to Brazil has been a particular concern because the Summer Olympics will be held in Rio de Janeiro in August.

Dr. Bruce Aylward, WHO’s executive director for outbreaks and health emergencies, said recently published studies in the Lancet medical journal on microcephaly and by the U.S. Centers for Disease Control and Prevention (CDC) on Guillain-Barre had strengthened the case that Zika is responsible.

The White House and the CDC will bring together U.S. state and local officials on April 1 for a summit at the CDC’s Atlanta headquarters to urgently craft a plan to attack the hard-to-control mosquito that spreads the virus.

The White House is inviting officials involved in mosquito control and public health to discuss how best to track and control the spread of the virus and respond when people are infected.

U.S. federal health officials expect the first locally transmitted cases of the Zika virus in the continental United States by June or July.

“We can’t say for sure that we’re not going to have a major outbreak in the United States. I do not think we will, but we will be prepared for it anyway,” Dr. Anthony Fauci, director of the U.S. National Institute of Allergy and Infectious Diseases, said at an event presented by the Harvard T.H. Chan School of Public Health in collaboration with Reuters.

In addition, doctors in Venezuela reported their first suspected Zika-linked microcephaly case in a fetus that died whose mother likely was infected with the virus.

Much remains unknown about Zika, including whether the virus actually causes microcephaly. Brazil said it has confirmed more than 640 microcephaly cases and considers most to be related to Zika infections in the mothers. Brazil is investigating more than 4,200 additional suspected microcephaly cases.

The study in Cell Stem Cell showed that Zika infects a kind of neural stem cell that gives rise to the cerebral cortex, the brain’s outer layer responsible for intellectual capabilities and higher mental functions.

These cells, exposed to the virus in laboratory dishes, became infected within three days, turned into “virus factories” for viral replication and died more quickly than normal, the researchers said.

French scientists, in a retrospective study of a 2013-2014 Zika outbreak in French Polynesia, said last week they had proved a link between Zika and Guillain-Barre, suggesting countries hit by the Zika outbreak will see a rise in the neurological condition.

“The important thing is the data is moving in one direction. And that’s the reason we’ve asked the Emergency Committee again next week to convene and look at these data,” the WHO’s Aylward said, referring to a group of independent experts chaired by David Heymann.

(Reporting by Stephanie Nebehay in Geneva and Roberta Rampton in Washington; Additional reporting by Andrew M. Seaman and Bill Berkrot in New York, Alexandra Ulmer and Corina Pons in Caracas and Julia Symmes Cobb in Bogota; Writing by Will Dunham; Editing by Michele Gershberg and Leslie Adler)