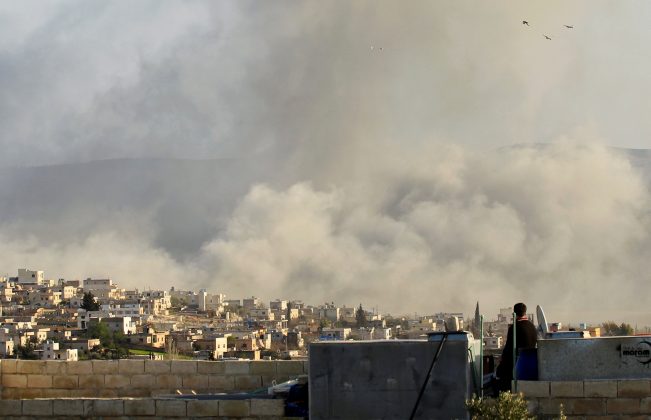 BEIRUT (Reuters) – The Syrian conflict has turned toward the northwestern Idlib region, where government preparations for a Russian-backed offensive have sparked a concerted Turkish diplomatic bid to prevent an attack.

A major assault in Idlib, home to some three million people, could be more deadly and destructive than any other in a war that has killed hundreds of thousands of people since 2011. The U.N. is warning of a humanitarian catastrophe.

It could also prove the most challenging campaign yet for Assad: Turkey has forces on the ground in Idlib, where the rebels are heavily armed and include highly motivated jihadists.

Idlib is held by an array of rebels. The most powerful is Tahrir al-Sham, an amalgamation of Islamist groups dominated by the former Nusra Front – an al Qaeda affiliate until 2016.

There are other Islamists and groups fighting under the Free Syrian Army banner. With Turkish backing, they are now gathered under “the National Front for Liberation”.

Idlib is also the last major haven for foreign jihadists who came to wage war against the Alawite-led Assad government.

Estimates of the number of insurgents varies.

The U.N. Syria envoy has said there are thought to be around 10,000 Nusra fighters. Rebel sources say the overall number of rebels reaches many tens of thousands.

WHY DOES IT MATTER TO ASSAD AND RUSSIA?

Assad wants to recover “every inch” of Syria and is already militarily on top. Finishing off the Idlib rebels would take him closer to victory, help secure Aleppo from attack and open roads to the coast and Damascus.

For Russia, which has been fighting in support of Assad since 2015, foreign fighters in Idlib are a big concern.

President Vladimir Putin has said at least 9,000 people from the former Soviet Union have gone to Syria to fight for Islamic State or other extremist groups. Capturing Idlib would secure Russia’s airbase in Latakia province from rebel drone attacks.

WHY DOES IT MATTER TO THE OPPOSITION?

Together with adjoining territory north of Aleppo, Idlib forms the last opposition foothold in Syria.

Rebels and anti-Assad civilian activists have poured into the region under surrender agreements that have granted them safe passage out of former insurgent areas. Outside the northwest, Assad’s opponents have nowhere to go but exile.

Half the three million people in Idlib were displaced from other parts of Syria. The U.N. has described it as a “dumping ground” for people from elsewhere in the country.

WHAT MAKES IDLIB SO COMPLICATED?

Turkey, with NATO’s second largest army, has recently reinforced 12 military posts set up in Idlib under an agreement with Russia and Iran. Damascus has seldom encountered hostile foreign armies in the war.

Rebels say Turkey has recently boosted arms supplies to insurgents in Idlib. By contrast, Assad’s foreign foes did nothing to obstruct his recent campaign to recover the southwest near Jordan and Israel.

The sheer number of rebels and size of Idlib are also seen as spelling a costly campaign for Damascus. The insurgents are thought to possess anti-armor and anti-aircraft missiles, diplomats say.

And unlike many of the other areas won back by Assad, the northwest has not been weakened by years of government siege.

WHAT IS IRAN’S VIEW?

Iran has said it shares the U.N. concern about a potential humanitarian catastrophe and is seeking to avert it.

Western diplomats say Russia and Iran, which has supplied manpower vital to Assad, may not be entirely on the same page.

“The Iranians are saying they don’t want to go quickly on this, which is going against the Russian message. So we’re seeing some differences, which until now we hadn’t seen as they were pretty tight together,” said a European diplomat.

“It’s significant especially as the regime is dying to go forward, but we’ll see how long this offensive is on hold for.”

The diplomats caution that it is unclear if Iran’s Revolutionary Guard Corps, which has run Tehran’s war effort in Syria, shares the view of other parts of the Iranian government.

WHAT IS THE WESTERN VIEW?

While Western governments do not directly back the Idlib rebels, they oppose a government offensive.

The United States has said there is evidence government forces are preparing chemical weapons ahead of an attack.

The White House has warned that the United States and its allies would respond “swiftly and vigorously” if government forces used such arms in Idlib.

Britain’s U.N. ambassador has said Syrian generals would be “held accountable by the international community” for a major offensive that caused mass civilian casualties.

Idlib’s status as a haven for al Qaeda-linked militants has also been of concern to the United States, which has previously mounted drone strikes in the Idlib area.

COULD TURKEY AND RUSSIA STRIKE A DEAL?

Erdogan has called for an international counterterrorism operation in Idlib, in which rebels deemed moderate by Ankara would take part. Russia has called militants there a “festering abscess” that must be liquidated.

Any arrangement that left part or all of Idlib under Turkish control would be anathema to Assad. “I do not see a practical solution. The Syrian side is very impatient,” a diplomat said.

IF ASSAD TAKES IDLIB, IS THE WAR OVER?

No. Lots of territory would remain beyond his grip. Outside Idlib, rebels would still be able to find sanctuary north of Aleppo. Anti-Assad groups also have a base in an area on the Iraqi border, operating alongside the U.S.-led coalition.

A large chunk of northern and eastern Syria remains outside his control. This territory, rich in oil, water and farmland, is held by Kurdish-dominated fighters supported by U.S. forces. While the Kurds are not hostile to Assad, they want a large degree of autonomy, which he opposes.