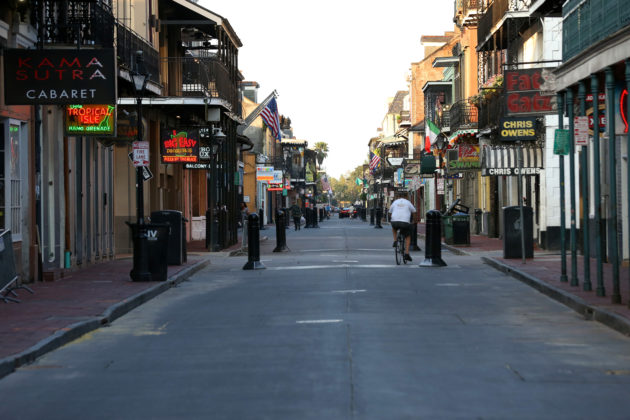 FILE PHOTO: A view of Bourbon Street amid the outbreak of the coronavirus disease (COVID-19), in New Orleans, Louisiana, U.S. March 25, 2020. REUTERS/Jonathan Bachman

(Reuters) – The coronavirus has been a far deadlier threat in New Orleans than the rest of the United States, with a per-capita death rate almost three times that of New York City. Doctors, public health officials and available data say the Big Easy’s high levels of obesity and related ailments may be part of the problem.

“We’re just sicker,” said Rebekah Gee, who until January was the health secretary for Louisiana and now heads Louisiana State University’s healthcare services division. “We already had tremendous healthcare disparities before this pandemic – one can only imagine they are being amplified now.”

Along with New York and Seattle, New Orleans has emerged as one of the early U.S. hot spots for the coronavirus, making it a national test case for how to control and treat the disease it causes. Chief among the concerns raised by doctors working in the Louisiana city is the death rate, which is close to three times that of New York and over four times that of Seattle, based on publicly reported data.

New Orleans residents suffer from obesity, diabetes and hypertension at rates higher than the national average, conditions that doctors and public health officials say can make patients more vulnerable to COVID-19, the highly contagious respiratory disease caused by the coronavirus.

Some 97% of those killed by COVID-19 in Louisiana had a pre-existing condition, according to the state health department. Diabetes was seen in 40% of the deaths, obesity in 25%, chronic kidney disease in 23% and cardiac problems in 21%.

Orleans Parish, which encompasses the city, reported 115 deaths as of Wednesday, giving it 29.5 coronavirus deaths per 100,000 people. That rate for New York City was at 10.8 on Wednesday.

New Orleans could be a harbinger for the potential toll the pandemic could take in other parts of the South and Midwest that also have high rates of obesity, diabetes, and hypertension.

A host of other factors could contribute to New Orleans’ high death rate from COVID-19, ranging from access to healthcare and hospital quality, to the prevalence of other conditions, including lung disease, health officials say.

But they also note that it is clear that obesity-related conditions are playing a role in the deaths. That could be a warning sign for the United States at large, where chronic obesity is more common than in other developed countries, they said.

Hospitals are reporting cases across the generations -mothers and daughters, fathers and sons – being intubated and cared for in the same intensive care units, said Tracey Moffatt, the chief nursing officer at Ochsner Health, the largest healthcare provider in Louisiana. The prevalence of obesity, diabetes, hypertension and heart disease in New Orleans and Louisiana plays into that, she said.

Those family members often suffered from the same medical conditions before becoming sick, leaving them similarly vulnerable to the coronavirus despite their age gaps.

“We had a case where a mom was already in the ICU and the daughter, who was obese, came in,” she said. “The daughter asked staff to wheel her by her mom’s room so she could say goodbye before she herself was intubated. We knew the mother was going to pass away.”

Both patients suffered from obesity.

The Centers for Disease Control and Prevention this week released for the first time a report showing that 78% of COVID-19 patients in ICUs in the United States had an underlying health condition, including diabetes, cardiovascular disease and chronic lung disease.

The CDC report was based on a sample of under 6% of reported coronavirus infections, but doctors in Louisiana said it was consistent with what they are seeing, and it is in line with what other countries like Italy and China have faced.

Those percentages, said Dr. Joseph Kanter, an emergency department doctor and the top public health official in New Orleans, are likely similar in cities across the United States.

“What we worry about here is that we have more people in our communities with those conditions,” he said. “We’re more vulnerable than other communities, and the number of deaths we’ve seen illustrates that.”

The New Orleans metropolitan statistical area ranks among the worst in the United States for the percentage of residents with diabetes, high blood pressure and obesity, a Reuters analysis of CDC data shows. An estimated 39% have high blood pressure, 36% are obese and about 15% have diabetes.

Nationally, the median is 32% with high blood pressure, 31% obese and 11% with diabetes.

“The burden of disease in Louisiana and the Deep South is higher than in the rest of the country,” said Gee. “Invariably that means that the South is going to be hard hit by this.”

(This story corrects headline, paragraphs 1 and 3 to reflect actual death toll of Orleans Parish of 115 deaths; Inserts new paragraph 6 with breakdown of figures.)