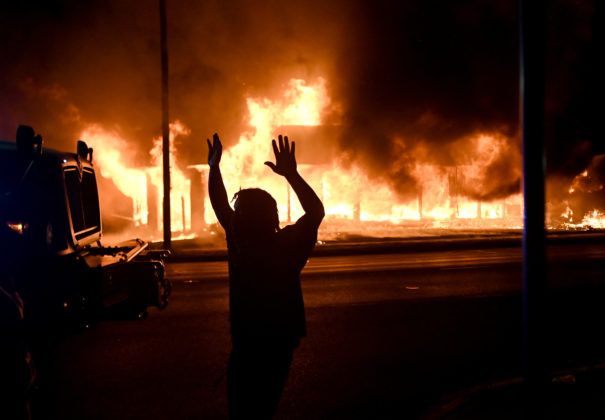 A man walks by an armoured vehicle as B&L Office Furniture burns in the background as protests turn to fires after a Black man, identified as Jacob Blake, was shot several times by police last night in Kenosha, Wisconsin, U.S. August 24, 2020. REUTERS/Stephen Maturen

KENOSHA, Wis. (Reuters) – Arsonists set buildings ablaze and torched much of the Black business district in Kenosha, Wisconsin, during a second night of unrest sparked by the wounding of a Black man shot in the back by police as his three young sons looked on.

Kenosha County Board of Supervisors member Zach Rodriguez said the board would hold an emergency meeting on Tuesday on seeking federal help, such as U.S. Marshals Service officers, to quell the unrest after some 300 rioters set fire to buildings overnight.

“Essentially, our city was burned to the ground, building by building,” he told Reuters. “Enough is enough.”

Smoke billowed over central Kenosha after police in riot gear clashed with protesters as they defied a dusk-to-dawn curfew on Monday night and Tuesday morning, near where police gunned down Jacob Blake on Sunday.

Video shows Blake walking toward the driver’s side door of his car, away from two officers who were pointing guns to his back. After he opens the door, seven shots ring out with one of the officers tugging at his shirt. It remains unknown what the officers may have seen inside Blake’s car.

But the incident, the latest in a litany of cases to focus attention on police treatment of African Americans, unleashed outrage in the lakefront city of Kenosha, located north of Chicago and south of Milwaukee.

The shooting occurred three months after the death of George Floyd, a Black man in Minneapolis who was pinned to the street under the knee of a white police officer, sparking nationwide protests against police brutality and racism.

Portland, Oregon, has been the scene of weeks of protests following Floyd’s death that have sometimes turned violent. Police there once again declared a riot late on Monday and arrested several demonstrators after fires were lit at the offices of a police union.

Seattle police said demonstrators set multiple buildings on fire, resulting in at least one arrest and one officer injured.

In Minneapolis, protesters including one man armed with a long gun stopped an armored police vehicle in the street until officers cleared the way with tear gas.

Basketball star LeBron James, who has emerged as a national leader on issues of race, lent his voice to the protests, telling reporters covering the NBA playoffs that “we are scared as Black people in America. … We are terrified.”

“Why does it always have to get to a point where we see the guns firing,” said James, adding he believed police had ample opportunity to subdue Blake.

Black Lives Matter activists are demanding the immediate firing or arrest of the Kenosha officers, who have been placed on administrative leave.

Hours into the curfew, the mostly peaceful demonstration turned violent with some protesters setting off fireworks in front of police. Commercial and government buildings were set ablaze, along with vehicles in car dealership lots.

Local police who had support from National Guard troops fired tear gas, rubber bullets and smoke bombs to disperse the crowd, which grew to several hundred, according to protester Porche Bennett, 31, of Kenosha.

Fires destroyed much of the Black business district, Bennett said, adding that the instigators she saw were white.

“It’s people from out of town doing this. We’ve been shopping there since we were kids and they set it on fire,” Bennett said.

One white man riding a skateboard doused a government truck with an accelerant and set it on fire. Heavily armed white civilians stood guard in front of one business to protect it from vandals.

At least one man was injured, shown on social media bleeding from the head as civilians administered aid.