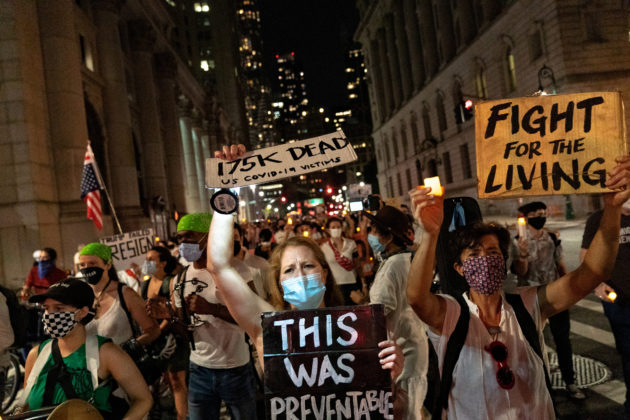 (Reuters) – The number of new cases of the novel coronavirus reported in the United States fell 17% last week, the fifth straight week of declines, according to a Reuters tally of state and county reports.

Nearly 1,000 people a day continue to die from COVID-19, though last week’s total of more than 6,700 deaths was down 9% from the previous seven days.

The United States posted 297,000 new cases for the week ended Aug. 23, down from a weekly peak of over 468,000 cases in mid-July. The country is now averaging less than 50,000 new infections a day for the first time since early June.

The United States still has the worst outbreak in the world, accounting for a quarter of the global total of 23 million cases.

The state with the biggest percentage increase in new cases last week was South Dakota at 50%. Infections have been rising since the annual motorcycle rally in Sturgis, which drew more than 100,000 people from all over the country from Aug. 7 to 16. The South Dakota health department was not immediately available for comment.

Nationally, the share of all tests that came back positive for the new virus was 6.3%, down from 7% the prior week and below a peak of 9% in mid-July, according to data from The COVID Tracking Project, a volunteer-run effort to track the outbreak.

South Carolina had the highest positivity rate in the nation at 22%, followed by Texas, Nevada and Idaho at 16%.

At least 29 states reported a positivity rate above 5%, the level the World Health Organization considers concerning because it suggests there are more cases in the community that have not yet been uncovered.