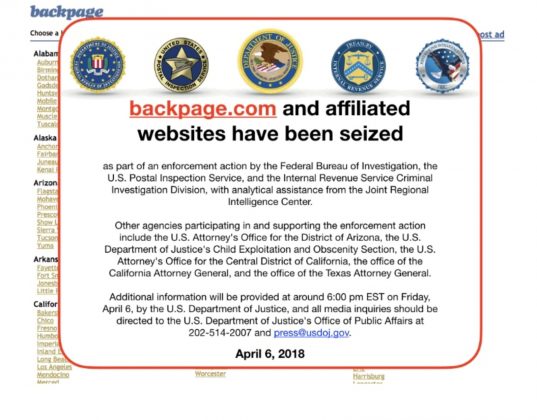 FILE PHOTO: An image of the current home page of the website backpage.com shows logos of U.S. law enforcement agencies after they seized the sex marketplace site April 6, 2018. backpage.com via REUTERS/File Photo

(Reuters) – A Wisconsin man who prosecutors say transported seven young women across state lines and forced them into prostitution using ads on Backpage.com before U.S. authorities shut it down was found guilty on Monday on federal sex trafficking charges.

The conviction of Erin Graham, 37, marks the latest criminal case stemming from Backpage, which became the largest sex marketing website before it was seized in April 2018 as part of an investigation that saw the website’s founders and CEO charged in a 93-count federal court indictment. They are set to go on trial next year.

Graham was found guilty of seven counts of sex trafficking following a five-day trial in federal court in Madison, Wisconsin.

During the trial victims testified they had been forced to engage in multiple acts of prostitution and turn over the money to him and his girlfriend, Patience Moore, 28, the U.S. Attorney’s Office said in a written statement.

He was arrested in April 2017 when a young woman ran bleeding into a Madison, Wisconsin hotel lobby and hid behind the front desk, prompting a clerk to call police. The woman told a nurse at a local hospital Graham had strangled her to the point of unconsciousness after telling him she wanted to leave.

“Through violence and coercion, Graham exploited vulnerable young women into committing commercial sex acts for his profit. In the process the victims were often degraded and robbed of their human dignity,” U.S. Attorney Scott Blader said in the statement.

Graham faces a sentence of 15 years to life in prison when he is sentenced on July 1. Moore pleaded guilty last month to a role in the sex trafficking scheme and also faces a possible life prison term.

Then-Backpage CEO Carl Ferrer agreed to shutter the website in April 2018 as part of an agreement with prosecutors that saw him plead guilty to conspiracy and money laundering charges.

Days after the Backpage seizure, President Donald Trump signed into law the Stop Enabling Sex Traffickers Act and Fight Online Sex Trafficking Act, or SESTA-FOSTA. The new laws amended the ‘safe harbors’ provisions of the Communications Decency Act that had protected websites from criminal liability over third-party or user-generated content.