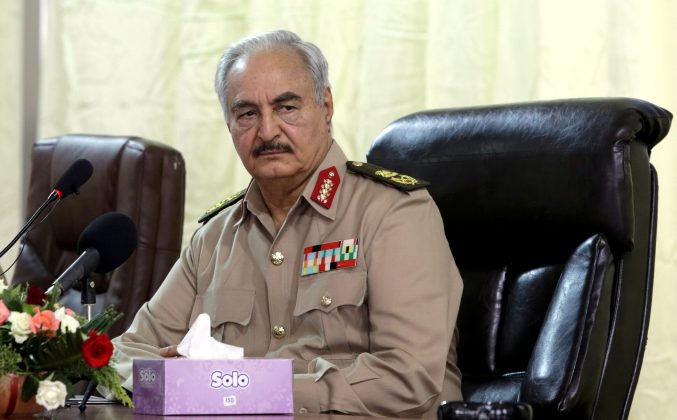 UNITED NATIONS (Reuters) – The U.N. Security Council is considering a British-drafted resolution that would demand a ceasefire in Libya and call on all countries with influence over the warring parties to ensure compliance.

Diplomats from the 15-member council are due to meet later on Tuesday to discuss the text that also calls for unconditional humanitarian aid access in Libya, which has been gripped by anarchy and conflict since Muammar Gaddafi was toppled in 2011.

The latest flare-up began almost two weeks ago – during a visit to the country by U.N. Secretary-General Antonio Guterres – when eastern Libyan commander Khalifa Haftar’s Libyan National Army (LNA) advanced to the outskirts of the capital Tripoli.

Haftar’s forces predicted victory within days, but Prime Minister Fayez al-Serraj’s internationally-recognized government has managed to bog them down in southern suburbs with help from armed groups from various western Libyan factions.

The Security Council informally expressed concern on April 5, calling on all forces to de-escalate and halt military activity and specifically calling out the LNA.

However, in the following days the council was unable to issue a more formal statement, diplomats said, as Russia objected to a reference to the LNA, while the United States said it could not agree a text that did not mention Haftar’s forces.

The draft U.N. Security Council resolution, seen by Reuters, expresses “grave concern at military activity in Libya near Tripoli, which began following the launching of a military offensive by the LNA … and threatens the stability of Libya.”

It also demands that all parties in Libya immediately de-escalate the situation, commit to a ceasefire, and engage with the United Nations to end hostilities.

Diplomats said the draft text could be put to a vote as early as this week. A resolution needs nine votes in favor and no vetoes by the United States, Britain, France, Russia or China to pass.

Haftar enjoys the backing of Egypt, the United Arab Emirates and Saudi Arabia, who view him as an anchor to restore stability and combat Islamist militants, while western powers support Serraj.

The draft U.N. text “calls upon all member states to use their influence to ensure compliance with this resolution.”