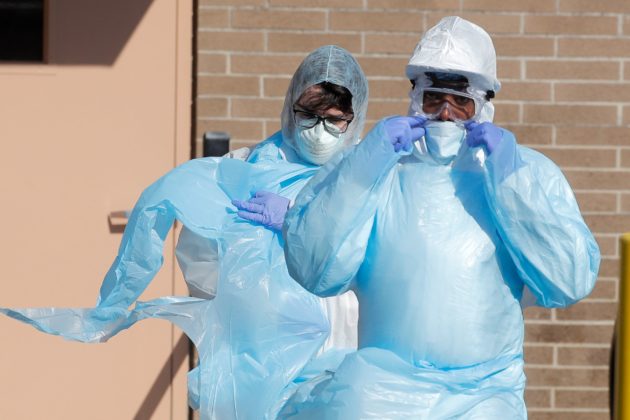 By Doina Chiacu and Susan Heavey

WASHINGTON (Reuters) – The United States entered what an official called the “peak death week” of the coronavirus on Monday while a watchdog report said hospitals were struggling to maintain and expand capacity to care for infected patients.

The U.S. death toll, now at more than 9,600, was rapidly closing in on Italy and Spain, the countries with the most fatalities to date at nearly 16,000 and about 12,500 respectively, according to a Reuters rally of official data.

He raised particular alarm for the states of New York, New Jersey, Connecticut and the city of Detroit.

Results of a national March 23-27 survey showed that “severe shortages” of testing supplies and long waits for test results were limiting the ability of hospitals to keep track of the health of staff and patients, the U.S. Department of Health and Human Services Office of Inspector General said. https://bit.ly/2xOZfof

“Hospitals also described substantial challenges maintaining and expanding capacity to care for patients,” said the report, described as a snapshot of the issues hospitals faced in mid-March. Efforts were being made to address those issues, it said.

The survey, which included information from 323 hospitals, confirmed reports that shortages of beds, ventilators and protective gear were creating chaotic conditions, with patients, isolated from their families, dying alone.

Meanwhile, more than 90 percent of Americans are under stay-at-home orders issued by state governors.

GLIMMER OF HOPE Despite the grim warnings, at least one model offered hope that the death rate was slowing.

The University of Washington model, one of several cited by U.S. and some state officials, now projects U.S. deaths at 81,766 by Aug. 4, down about 12,000 from a projection over the weekend.

The model, which is frequently updated with new data, projects the peak need for hospital beds on April 15 and for daily deaths at 3,130 on April 16.

Trump, who has oscillated between issuing dire warnings and expressing optimism that contradicts the views of his medical experts, tweeted “USA STRONG!” and “LIGHT AT THE END OF THE TUNNEL!” on Monday.

Trump has deferred to state governors for issuing stay-at-home orders.

Eight states, all with governors from Trump’s Republican Party, have yet to order residents to stay home: Arkansas, Iowa, Nebraska, North Dakota, South Carolina, South Dakota, Utah and Wyoming. Georgia, which has recorded 6,600 cases and more than 200 deaths, ordered residents to stay home but then allowed some beaches to reopen.

In Washington, D.C., and other places, some people flouted the social distancing guidelines over the weekend. Sunshine and warm weather brought hordes of people out to bike trails and open spaces near the Potomac River. While a number of people wore masks, some groups moved together in close proximity.

White House trade adviser Peter Navarro on Monday acknowledged that members of the White House coronavirus task force disagreed over the weekend about the efficacy of a malaria drug, hydroxychloroquine, for use against the disease.

Navarro had clashed with Dr Anthony Fauci, director of the National Institute of Allergy and Infectious Diseases, Axios reported. Fauci and other top health advisers have argued there have not been enough studies done to prove the drug was effective against COVID-19, the respiratory disease caused by the new coronavirus.

U.S. President Donald Trump has made his opinion on the drug well known and personally pressed federal health officials to make the drug available to treat coronavirus, two sources have told Reuters. [nL1N2BS06Q]

In an interview on CNN on Monday, Navarro said 29 million tablets of hydroxychloroquine were sitting in a warehouse.

He told CNN that at the task force meeting on Saturday, “there was unanimous agreement” that the Federal Emergency Management Agency “would immediately begin surging hydroxy into the hot zones to be dispensed only between a doctor and a patient decision not the federal government.”