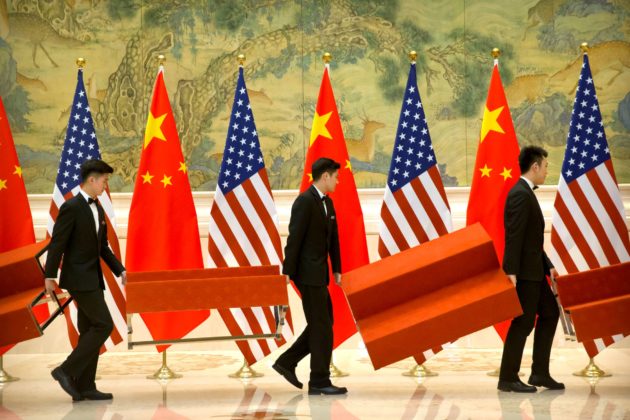 By Andrea Shalal and Cate Cadell

U.S. and Chinese deputy trade negotiators were due to meet in Washington for a second day of talks on Tuesday, laying the groundwork for the first minister-level meetings in over two months later this week.

A report from the South China Morning Post said China had tamped down expectations ahead of the talks scheduled for Thursday with Chinese Vice Premier Liu He, U.S. Trade Representative Robert Lighthizer and Treasury Secretary Steven Mnuchin, saying the Chinese delegation could leave earlier than planned because “there’s not too much optimism.”

The action bars the firms from buying components from American companies without U.S. government approval, a potentially crippling move. It follows the same blueprint used by Washington in its attempt to limit the influence of Huawei Technologies Co Ltd [HWT.UL] for what it says are national security reasons.

Hikvision, with a market value of about $42 billion, calls itself the world’s largest maker of video surveillance gear.

U.S. officials said the action was tied to China’s treatment of Muslim minorities and human rights violations, provoking a sharp reaction from Beijing.

China said the United States should stop interfering in its affairs. It will continue to take firm and resolute measures to protect its sovereign security, foreign ministry spokesman Geng Shuang told a regular media briefing without elaborating.

Major U.S. stock indexes fell on Tuesday, amid the continued tensions between the United States and China, whose tit-for-tat tariffs have roiled financial markets, slowed capital investment, and triggered a slowdown in trade flows.

New International Monetary Fund Managing Director Kristalina Georgieva issued a stark warning about the state of global growth on Tuesday, saying trade conflicts had thrown it into a “synchronized slowdown” and must be resolved.

In her inaugural speech after taking over the global crisis lender on Oct. 1, Georgieva unveiled new IMF research showing that the cumulative effect of trade conflicts could mean a $700 billion reduction in global GDP output by 2020, or around 0.8%.

The trade talks are taking place days before U.S. tariffs on $250 billion worth of Chinese goods are slated to rise to 30% from 25%. Trump has said the tariff increase will take effect on Oct. 15 if no progress is made in the negotiations.

President Donald Trump on Monday said a quick trade deal was unlikely, and that he would not be satisfied with a partial deal.

The two sides have been at loggerheads over U.S. demands that China improve protections of American intellectual property, end cyber theft and the forced transfer of technology to Chinese firms, curb industrial subsidies and increase U.S. companies’ access to largely closed Chinese markets.

Trump launched a new round of tariffs after the last high-level talks in late July failed to result in agricultural purchases or yield progress on substantive issues. China quickly responded with tariff increases of its own.

Washington is also moving ahead with discussions around possible restrictions on capital flows into China, with a focus on investments made by U.S. government pension funds, Bloomberg reported. The news sent shares of chipmakers sharply lower.

Another flashpoint has been a widening controversy over a tweet from an official with the NBA’s Houston Rockets. His backing of Hong Kong democracy protests was rebuked by the National Basketball Association, sparking a backlash.

Trump also called for a peaceful resolution to the protests in Hong Kong, and warned the situation had the potential to hurt trade talks.

Police in Hong Kong have used rubber bullets, tear gas and water cannons against pro-democracy demonstrators in the former British colony, which has been plunged into its worst political crisis in decades.

Beijing views U.S. support for pro-democracy protests in Hong Kong as interfering with its sovereignty.