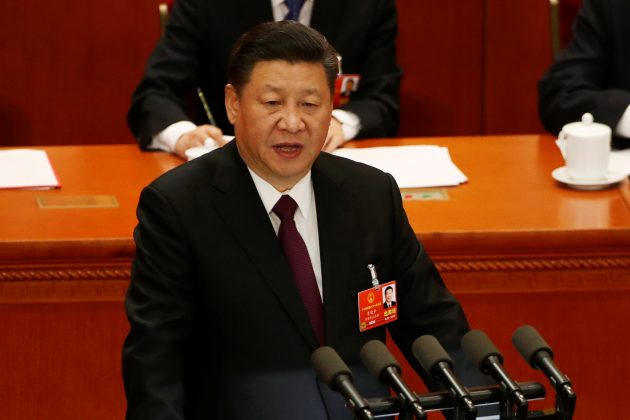 Chinese President Xi Jinping speaks at the closing session of the National People's Congress (NPC) at the Great Hall of the People in Beijing, China March 20, 2018. REUTERS/Damir Sagolj

By Philip Wen and Ben Blanchard

BEIJING (Reuters) – Chinese President Xi Jinping told self-ruled Taiwan on Tuesday that it would face the “punishment of history” for any attempt at separatism, offering his strongest warning yet to the island claimed by China as its sacred territory.

In response, the government of Taiwan, one of China’s most sensitive issues and a potentially dangerous military flashpoint, said it hoped China could “break free” of the old clichés of threats and force.

China’s hostility toward Taiwan has risen since the 2016 election of President Tsai Ing-wen, a member of the island’s pro-independence Democratic Progressive Party.

China suspects Tsai wants to push for formal independence, which would cross a red line for Communist Party leaders in Beijing, though Tsai has said she wants to maintain the status quo and is committed to ensuring peace.

China has been infuriated by U.S. President Donald Trump’s signing into law legislation last week that encourages the United States to send senior officials to Taiwan to meet Taiwan counterparts, and vice versa.

The United States does not have formal ties with Taiwan but is required by law to help it with self-defense and is the island’s primary source of weapons.

China will push for the “peaceful reunification of the motherland” and work for more Taiwanese to enjoy the opportunities of its development, Xi told the 3,000-odd delegates to the annual session of parliament.

“It is a shared aspiration of all Chinese people and in their basic interests to safeguard China’s sovereignty and territorial integrity and realize China’s complete reunification,” Xi said in a speech at the end of the session.

“Any actions and tricks to split China are doomed to failure and will meet with the people’s condemnation and the punishment of history,” he added, to loud applause.

China had the will, confidence and ability to defeat any separatist activity, Xi said.

“The Chinese people share a common belief that it is never allowed and it is absolutely impossible to separate any inch of our great country’s territory from China.”

In Taiwan, the China policy-making Mainland Affairs Council said the government was firm in its conviction to protect Taiwan’s “sovereign dignity” and the well-being of its people.

“We also hope that mainland China’s leaders, at this time of entering into a new administration period, can break free of clichéd thinking of strong intimidation,” it added.

In a visit likely to further irritate China, U.S. Deputy Assistant Secretary of State Alex Wong will be in Taiwan this week, the island’s foreign ministry said.

China has also been worried about independence activists in the former British colony of Hong Kong following big street protests there in 2014 calling for universal suffrage.

Xi said China would uphold Hong Kong’s high degree of autonomy, but would also seek to increase “national consciousness and patriotic spirit” in the financial center.

Taiwan has shown no interest in being run by China, and has accused China of not understanding how democracy works, pointing out that Taiwan’s people have the right to decide its future.

The new U.S. law on Taiwan adds to strains between China and the United States over trade, as Trump has enacted tariffs and called for China to reduce its huge trade imbalance with the United States, even while Washington has sought Beijing’s help to resolve tension with North Korea.

Taiwan has thanked the United States for the law and its support, but its foreign ministry said on Monday there were no plans for any senior leaders, such as the president, to visit the United States.

While stepped-up Chinese military exercises around Taiwan over the past year have rattled the island, Xi reiterated China’s assertion that its rise was not a threat to any country, though China considers Taiwan to be merely a Chinese province not a nation.

“Only those who are in the habit of threatening others will see everyone else as a threat,” Xi said.