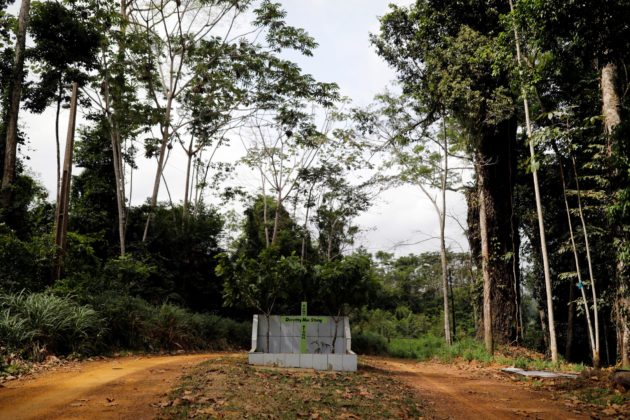 By Nacho Doce and Pablo Garcia

ANAPU, Brazil (Reuters) – Fourteen years ago, on a dirt road near a remote settlement in northern Brazil, a gunman paid by local cattle ranchers executed a U.S. nun who had spent much of her life fighting to save the Amazon rainforest and advocating for the rural poor.

The 2005 killing of 73-year-old Dorothy Stang, who was shot six times in the chest, back and head, shocked the world.

Her former colleagues, who still live near the town of Anapu in the state of Para where she worked, say the area remains as lawless and as dangerous as ever.

“The people here are eager to plant trees, to preserve the forest, to keep it standing and defend it, even with their lives,” said Sister Jane Dwyer, as she held a photo of her murdered colleague. “Because there are people here who have fled from gunmen and from threats.”

Their situation highlights the problem of policing the vast Amazon, where this year loggers, cattle ranchers, and farmers have been accused of triggering a sharp rise in fires and deforestation.

Dwyer and other nuns have recorded 18 deaths of local subsistence farmers in the region since 2015. They say the farmers were murdered over land disputes and that at least 40 people have left the area after receiving threats.

The Para state attorney general’s office did not immediately reply to a request for comment on the allegations.

The Amazon fires have created a major crisis for far-right President Jair Bolsonaro, who reacted with fury to global accusations that he was not doing enough to protect one of the world’s key bulwarks against climate change.

Critics said his election victory emboldened his gun-toting supporters to ignore environmental regulations. He has denied that, but he took office in January vowing to bring progress to the Amazon, and has long criticized indigenous reservations and environmental fines as a brake on development.

Bolsonaro is also a long-time skeptic of non-governmental organizations, including the Roman Catholic church, that work in the Amazon, arguing that they are seeking to curtail Brazil’s sovereignty. When the news of the blazes first broke, he even accused NGOs of starting the fires, without providing evidence.

His approach has caused tensions with global leaders, including Pope Francis. The first Latin American pontiff said this month that rapid deforestation should not be treated as a local issue since it threatened the future of the planet.

Next month, the Vatican will host a synod with bishops and other representatives, including indigenous peoples from across South America. The issue of protecting the Amazon will likely loom large.

Deep in the rainforest and far away from the corridors of power, protecting the Amazon is a lonely, challenging and increasingly dangerous task, say those at the frontline.

In Anapu, the federal government terminated a contract last month with a local security firm that was designed to provide protection for residents and the surrounding forest from invaders, residents said. The contract was not renewed due to a lack of funding, residents said they were told. INCRA, the government agency involved, did not respond to a request for comment from Reuters. The security contractor referred questions to INCRA.

Vinicius da Silva, 37, who leads an environmental conservation society in a local reserve and said he has faced threats from loggers, decried the lack of support.

“We have no protection,” he said. “We’re scared. We don’t know who comes into the reserve and what they’ll do inside it. We know they’re doing bad things in there, but when we ask the government to help, they come to look at the environmental damage and they say we did it.”

Brazil’s environment ministry did not immediately respond to a request for comment.

Bolsonaro has said that Brazil, facing a steep budget shortfall after years of recession, does not have the resources to police the vast Amazon.

But Father Amaro Lopes de Souza, who like Stang has fought for landless rights and environmental preservation in the region, said the president had not done enough to protect the people or the forest.

“Those who are destroying the Amazon are the big farms, and it’s those big farmers who made (Bolsonaro) president. Now, they think they can deforest and burn and devour everything,” he said.