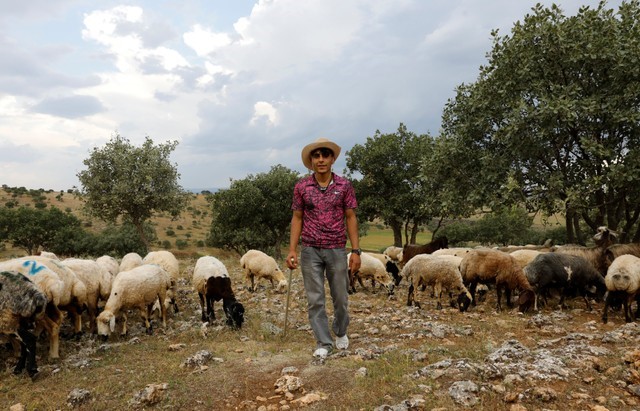 Demhat Tari poses for a picture during an interview with Reuters in Diyarbakir, June 4, 2018.REUTERS/Umit Bektas

ANKARA (Reuters) – Eighteen-year-old student Sena Su Baysal, a first-time voter in Turkey’s election on Sunday, can’t remember life before President Tayyip Erdogan took power but she wishes she had grown up in those earlier times.

“Turkey used to be a more modern and secular country,” she says at home in the capital Ankara, where she lives with her parents. “I would have liked to have lived then.”

Mehmet Salih Takil, another student born in 2000, disagrees. He says Erdogan is his idol, and he criticizes the “old Turkey”.

“I was two years old when Erdogan came to power. My family tells me of the pre-2000 years, life was difficult then. I wouldn’t have wanted to live in those years,” he said at an election rally for Erdogan in Ankara.

Like the rest of the country, Turkish teenagers taking part for the first time in elections on Sunday have sharply differing takes on Erdogan – the most successful and polarizing leader in recent Turkish politics.

His AK Party won elections in 2002 and he took power early the next year, ruling the country since then, first as prime minister and then as president.

Polls suggest Sunday’s vote may be close, with the AK Party possibly losing its parliamentary majority and the presidential vote potentially going to a second round.

Erdogan’s supporters, many of them pious conservatives from Turkey’s rural heartlands, say he has brought economic growth and restored Islam to public life. Opponents say he has eroded the secular pillars of the republic established by Mustafa Kemal Ataturk and is plunging Turkey into authoritarianism.

But the young Turks Reuters spoke to, all born in the first six months of the millennium, share an overriding concern for education and employment prospects.

“The education system has changed seven times during my high school years. Morale is low for all young people, but it is the people who are responsible for all this. After all, we are ruled by those we elect,” Tihminlioglu said.

Welat Aydin, a Kurdish citizen in a remote village in the southeastern province of Mardin, is concerned about the status of the Kurdish language, and a lack of resources in schools.

“We did not receive education in our mother tongue. Education is of poor quality anyway. When there is no chemistry teacher, the literature teacher takes chemistry classes. That is why I did not apply for university entrance exams. I didn’t believe I would stand a chance,” he said.

A young farmer in the southeastern province of Diyarbakir, Demhat Tari left education after secondary school, and instead traveled to Istanbul to find work.

“I was earning 1,500 Turkish lira ($320) a month which went to pay rent, water and electricity bills and no money was left. When I realized that there was no way I could save money, I returned to my village,” he said.

“There are no jobs, the dollar is on the rise, gold is expensive. As things are, I will never be able to get married.”

Cag Buyurgan, who is studying for university exams and wants to be a dentist, says Erdogan’s policies have been divisive.

“If he does not win these elections, we can once again restore the unity we have lost and together solve our problems one by one,” Buyurgan said in Ankara.

Twin sisters Sinem and Simge Tuncbilek think otherwise. They say that despite Turkey’s problems, things can get back on track, and both believe Erdogan will win on Sunday.

“We stand up for one another. Sure, we have problems but these are nothing that cannot be resolved,” Sinem said.

“The name of Erdogan for us is the name of love. He is a very good father, he has stood up for the whole Islamic world. We believe in his ideal of great Turkey.”

Zeynep Arslan, a volunteer for the opposition Islamist Saadet (Felicity) Party, has been wearing a Muslim headscarf since she was 12 – a right which Erdogan’s government championed – but she faults him for his foreign policy.

“Because I’m wearing the scarf, this doesn’t mean that I must ignore the country’s problems. This government allows me to cover my head, but it doesn’t sever relations with Israel,” she said.

In the secular Istanbul district of Kadikoy, Derin Kaleli says she is losing the freedom to choose how to dress.

“I cannot wear the clothes I like. People in Europe live as they wish. Here I am not as free as I would like to be. We are becoming more and more conservative. We are worried for the future,” she said.

Takil said the new executive presidency which will be instituted following the elections would restore some of the power Turkey enjoyed as the center of the Ottoman Empire.

“This is what the West fears. All plots of the Zionists, the freemasons, and the children of evil against Turkey will be foiled,” he said.

Arslan, however, says Erdogan’s supporters are too quick to condemn all opposition as traitors, making life almost unbearable. “There is immense pressure on us. We are living in a society which is similar to George Orwell’s 1984,” she said.