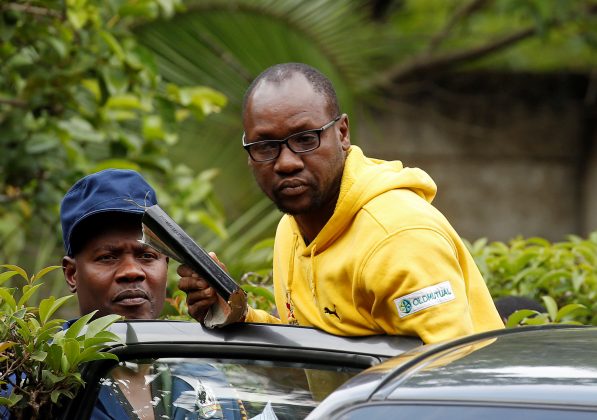 FILE PHOTO: Activist Pastor Evan Mawarire is taken into a vehicle by police outside his home in Harare, Zimbabwe, January 16, 2019. REUTERS/Philimon Bulawayo/File Photo

HARARE (Reuters) – Zimbabwe’s High Court deferred until next week a decision on whether to free an activist pastor detained over violent anti-government protests.

Evan Mawarire, who led a national shutdown in 2016 against Robert Mugabe, is accused of stoking the unrest which was countered by a violent crackdown reminiscent of the actions of security forces under the former president.

Prosecutors argued against the bail application, saying Mawarire posed a flight risk and could re-offend if released.

Judge Tawanda Chitapi said he would rule on Tuesday but hinted he could ban Mawarire from posting videos similar to the one that the state says encouraged unrest until the trial is over.

Protests erupted in mid-January following a hike in fuel prices and lasted for several days.

Security forces dispersed demonstrations by force and cracked down on activists, leading to fears that President Emmerson Mnangagwa’s government is reverting to the strong-arm politics seen during Mugabe’s 37-year rule.

Amnesty International said children as young as 11 had been detained along with hundreds others.

“The authorities must immediately stop this merciless crackdown on activists, civil society leaders and others who are guilty of nothing more than exercising their right to freedom of expression,” Amnesty’s Deprose Muchena said in a statement.

“The authorities must ensure that those who violated and continue to violate human rights face justice.”

Mnangagwa, who replaced Mugabe after a de facto coup in November 2017, promised this week to investigate security services’ actions against protesters.

Courts in the capital Harare and other towns heard cases of more than 100 people accused of public order offenses linked to the demonstrations, lawyers said.

Mawarire, who denies the charges remains in detention at Chikurubi Maximum Prison in Harare and was not present at Friday’s hearing.

Zimbabwe Congress of Trade Unions Peter Mutasa, who called for a peaceful stay-at-home strike in a video post with Mawarire, presented himself to police in Harare in the company of his lawyer. The union’s secretary general is already detained on subversion charges.