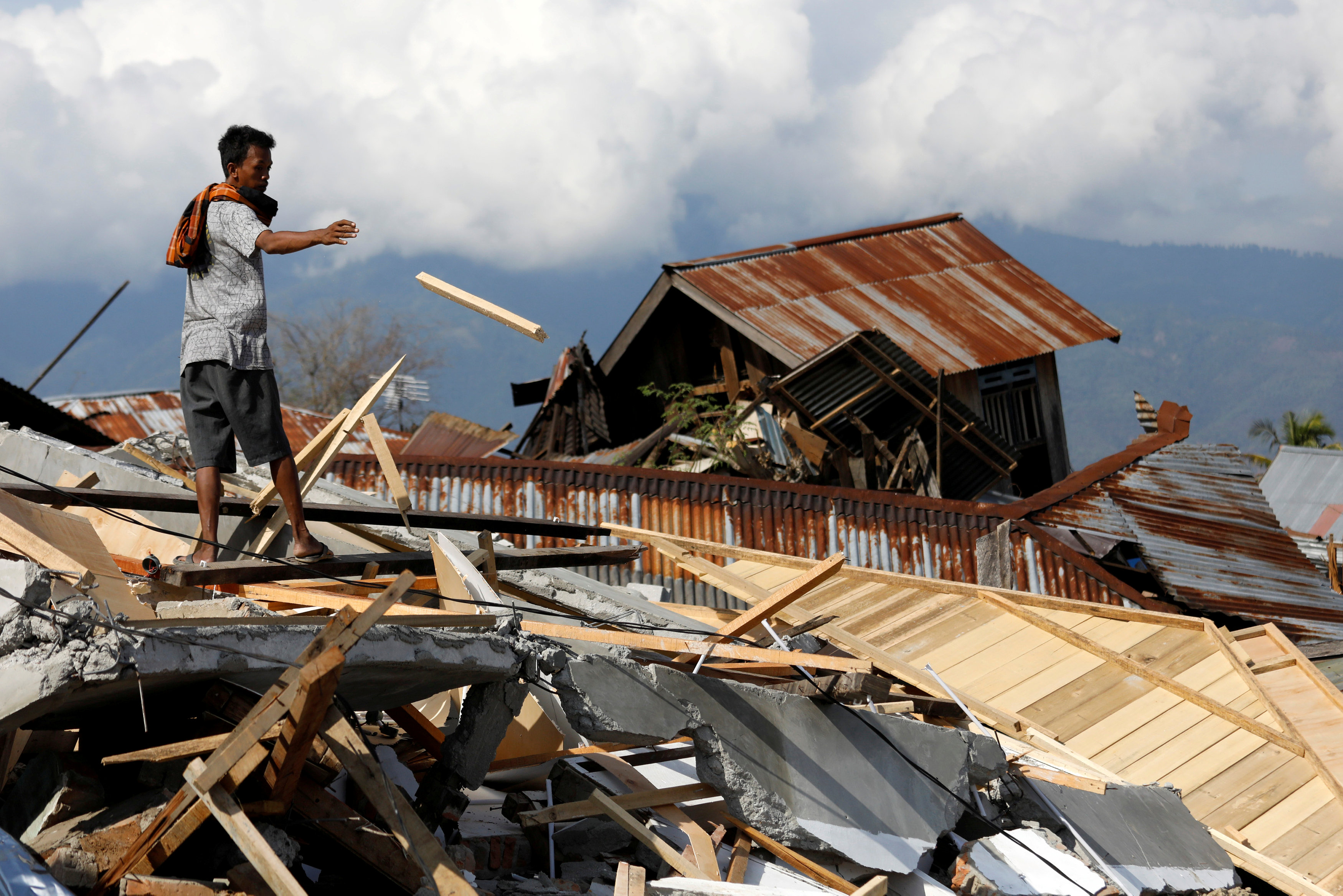 PALU, Indonesia (Reuters) – The young man standing atop a mound of gray mud and debris on the Indonesian island of Sulawesi, waiting for an excavator he hoped would dig out the bodies of his parents, voiced the exasperation many feel in his earthquake-plagued country.

“This is something that happens all the time in Indonesia. Why aren’t we getting better at handling it?” Bachtiar cried as the machine clanked through the ruins of someone’s kitchen in the city of Palu.

A 7.5-magnitude earthquake on Sept. 28 triggered a tsunami and extensive soil liquefaction, a phenomenon that turns soft soil into a seething mire, killing 2,073 people, according to the latest official estimate. Up to 5,000 more may be missing.

“In every disaster, there’s always a lesson to be learned,” Sutopo Purwo Nugroho, spokesman for the national disaster mitigation agency, said this week.

Nugroho conceded that Indonesia’s preparedness for disasters and capacity to respond still fall woefully short, not least because public funding is so low. He said the country’s disaster response budget is currently 4 trillion rupiah ($262 million) a year, equivalent to 0.002 percent of the state budget.

“We should not forget that there will be many disasters to come. It needs budget,” he said. “We need to learn from Japan as they are consistent in preparation.”

Critics say that, despite improvements at a national level in disaster management since a devastating Indian Ocean tsunami in 2004, local authorities often lack know-how and equipment, and so rescue efforts are delayed until the military can reach the area.

Also, a lack of education and safety drills means people don’t know how to protect themselves when an earthquake strikes.

Palu was Indonesia’s second earthquake disaster of 2018. In August, the island of Lombok was rocked by quakes that flattened villages and killed more than 500 people.

Indonesia straddles the southwestern reaches of the Pacific Ring of Fire and is practically defined by the tectonic plates that grind below its lush islands and blue seas.

The archipelago is strung out along a fault line under the Indian Ocean off its west coast. Others run northwards in the Western Pacific, including those under Sulawesi.

Volcanoes that dot the islands have brought fiery destruction and remarkable fertility, but rapid population growth over recent decades means that many more people are now living in hazardous areas.

For a graphic on destruction in Palu, click https://tmsnrt.rs/2IDFukK

The biggest – and most unexpected – killer in Sulawesi was soil liquefaction, a phenomenon where intense tremors cause saturated sand and silt to take on the characteristics of a liquid.

The liquefaction swallowed up entire neighborhoods of Palu.

With communications and power down, rescuers focused first on Palu’s tsunami-battered beachfront in the north and on collapsed hotels and shopping centers in its business district.

Roads to the south, where the city has spread out as it has grown, were initially impassable – damaged or blocked by debris.

So it took days for rescuers to reach the neighborhoods of Balaroa, Petobo, and Sigi, where traumatized survivors said the ground came alive when the quake hit, swallowing up people, vehicles and thousands of homes.

Liquefaction is a fairly common characteristic of high-magnitude earthquakes, but the Indonesian government says there is still insufficient understanding of the phenomenon and how to reduce exposure to it.

“Liquefaction is a new science. There are no guidelines on how to handle it,” Antonius Ratdomopurbo, secretary of the Geological Agency at the Ministry of Energy and Mineral Resources, told reporters this week.

A tsunami warning system set up after 2004 failed to save lives in Sulawesi: it emerged too late that, due to neglect or vandalism, a network of 22 buoys connected to seabed sensors had been inoperable since 2012.

With power and communications knocked out in Palu, there was no hope of warning people through text messages or sirens that tsunami waves of up to six meters (20 feet) were racing towards the city.

But that highlights what some experts say is the most important lesson: No one in a coastal area should wait for a warning if they feel a big quake.

“The earthquake is the warning,” said Adam Switzer, a tsunami expert at the Earth Observatory of Singapore. “It’s about education.”

Unlike in quake-prone Japan and New Zealand, earthquake education and drills are only sporadic in Indonesia, so there is little public awareness of how to respond.

“The problem in tsunami early warning systems is not the structure … but the culture in our communities,” said Nugroho.

That culture includes a resilience that emerged within days as the people of Palu picked up the pieces of their lives.

“Palu is not dead,” is daubed on a billboard by the beach.

Eko Joko, his wife and two children have been salvaging wood and metal to reconstruct their flattened beachfront shop-house.

“I tell my family they have to be strong, not scared so that I can be strong,” said Joko, 41.

“This disaster has not destroyed us.”