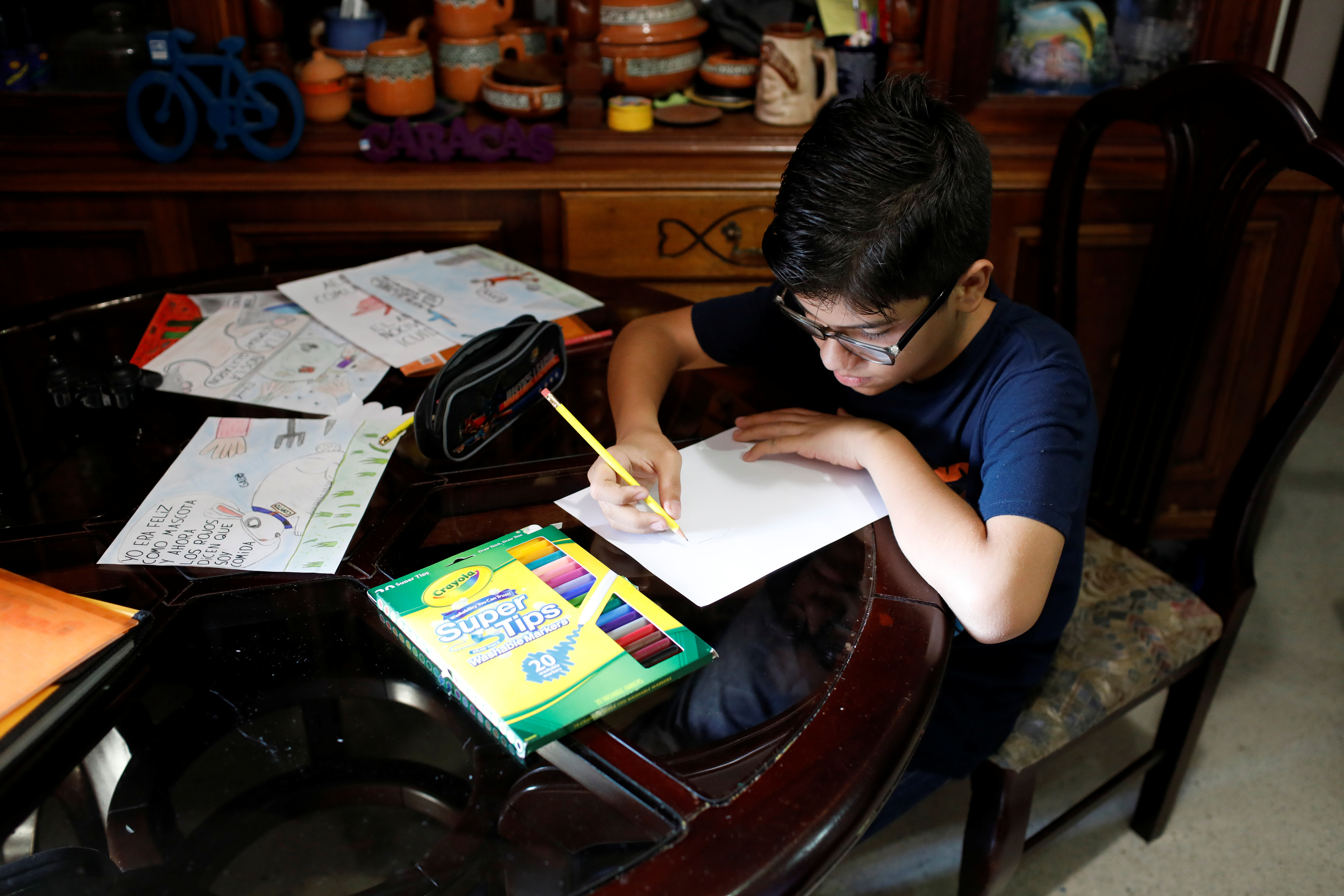 CARACAS (Reuters) – In one drawing, Lady Justice is seen fleeing Venezuela, a sword in her right hand and a suitcase in the left.

In another, a crying boy tells his father he does not want school to start again. His anguished father, gazing at a list of expensive school supplies, answers: “Me neither, my son.”

In a third drawing, a Venezuelan is seen running toward an alien spaceship, begging for help.

The creator of these evocative political cartoons is Gabriel Moncada, a 13-year-old Venezuelan schoolboy. 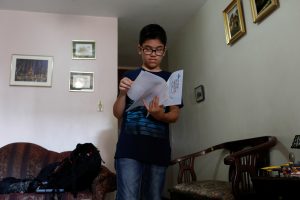 Gabriel Moncada looks at his drawings at his home in Caracas, Venezuela October 15, 2018. REUTERS/Marco Bello

The mature, bespectacled teen always enjoyed drawing animals and cars, but a few years ago began sketching the despair of his compatriots in the face of hyperinflation, mass emigration, and shortages of food and medicine.

“Kids start to realize (what is happening), because they do not go to the movies as much, they realize they cannot stay in the street late, there is not as much food in the house or the same products,” said Moncada, sitting at the desk where he sketches.

“The drawings are a way to express myself. I think it is a creative, fun, and different way of showing the problems we experience daily,” he said.

His mother, 46-year old radio journalist Cecilia Gonzalez, started to publish her son’s cartoons on her Facebook page in late 2016. An impressed friend quickly asked to publish them on her online news site, TeLoCuentoNews, where every Friday for nearly two years they have appeared in a section called “This is how Gabo sees it,” referring to Moncada’s nickname.

Venezuela’s economic meltdown has forced almost 2 million people to flee since 2015, according to the United Nations migration and refugees agencies. President Nicolas Maduro disputes that tally, saying they have been exaggerated by political adversaries, and that those who have left are seeking to return.

Moncada’s mother said the family initially tried to shield him from the reality of the country’s decay but gave up as the problems became increasingly evident. 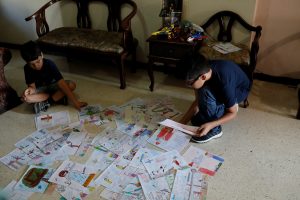 Gabriel Moncada looks at his drawings on the floor at his home in Caracas, Venezuela October 15, 2018. REUTERS/Marco Bello

“Nothing is like it used to be, and they realize that,” said Gonzalez. “You bring your kids to school and there are three or four children eating out of the garbage on the corner.”

The increasingly common sight of people eating from the trash emerged in one of Moncada’s sketches, which shows two rats standing below a pile of garbage as human hands dig through it.

One rat asks “Where’s the food?” The other responds “They have taken it from us.” 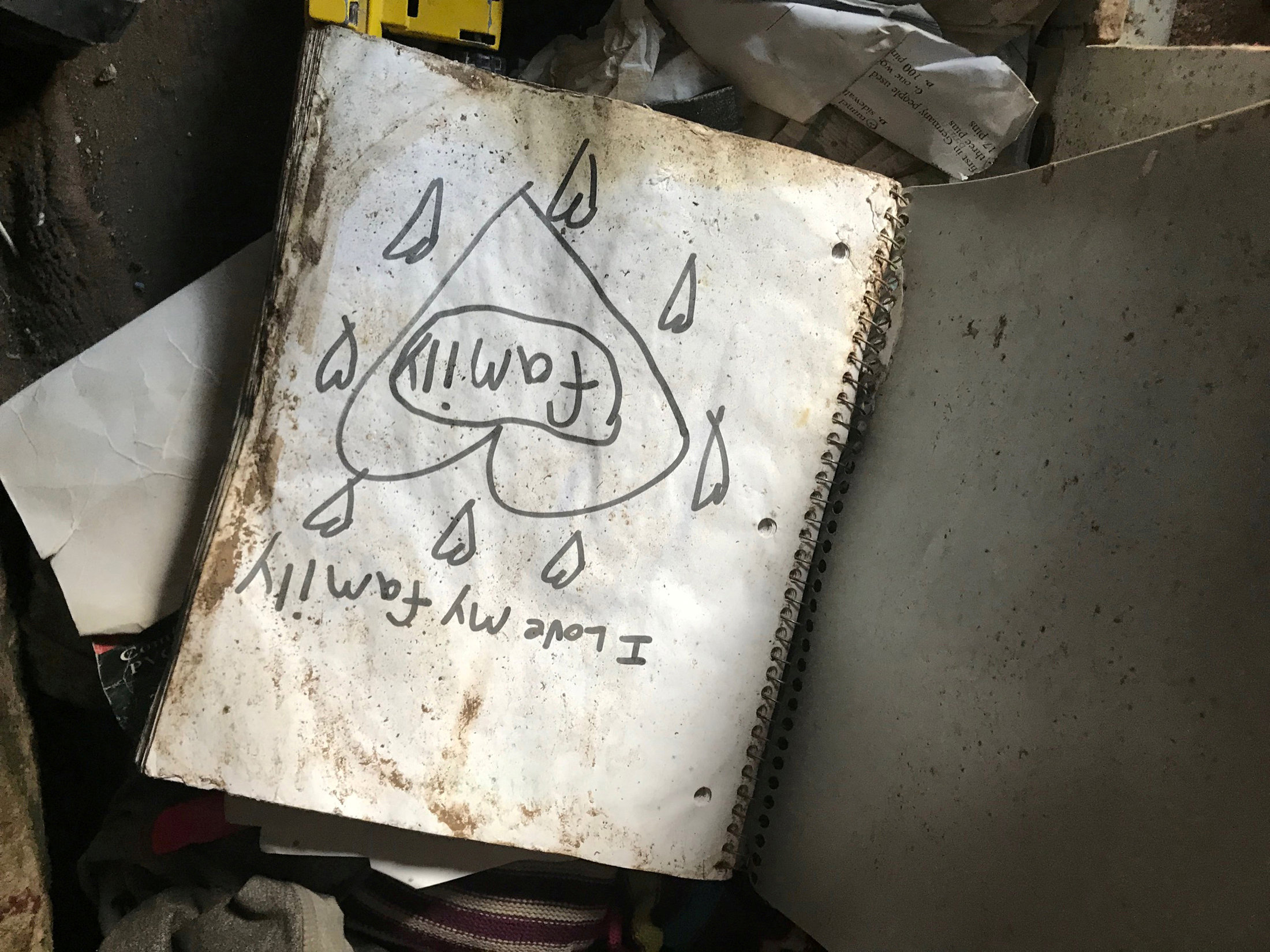 TAOS, N.M. (Reuters) – A 13-year-old boy who was part of group taken into custody at a squalid New Mexico compound last month has told FBI agents his mother’s boyfriend was training him to conduct “jihad” against non-believers, according to federal court documents.

The boy was among 11 children and five adults living at the compound in Taos County when it was raided on Aug. 3 by local sheriff’s deputies who discovered a cache of firearms and the children living without food or clean water. The dead body of a three-year-old boy was found buried at the site later.

They initially faced state charges, then on Friday, the five adults including a Haitian woman described as the group’s leader, 35-year-old Jany Leveille, were arrested by the Federal Bureau of Investigation and accused of conspiracy and firearms offenses.

In an affidavit filed in support of a criminal complaint, an FBI special agent wrote that Leveille’s 13-year-old son told investigators that his mother’s boyfriend, Siraj Ibn Wahhaj, 40, wanted to “get an army together” and train them for jihad.

The boy told agents that Ibn Wahhaj trained him and another of Leveille’s teenage sons in firearms and military techniques, including rapid reloads and hand-to-hand combat, and told them jihad meant killing non-believers on behalf of Allah, according to the affidavit filed in U.S. District Court in New Mexico.

The 13-year-old also told the FBI that his mother believed she received messages from God, and that he watched her and Ibn Wahhaj perform supposed “exorcism” rituals over the three-year-old boy, including one during which the boy choked and his heart stopped, according to the special agent’s affidavit.

The teenager said his mother and others at the compound told him not to talk to anyone about the three-year-old ever being at the compound because they would “all go to jail.”

Defense lawyers have said that the five adults were exercising their constitutional rights to practice their religion and own firearms, and that the group is being discriminated against because they are black and Muslim. The defense attorneys could not immediately be reached for comment on Saturday.

The five defendants came under FBI surveillance in May after Leveille wrote a letter to Ibn Wahhaj’s brother asking him to join them and become a “martyr,” state prosecutors have said.

They are due to appear in court in Albuquerque on Tuesday.