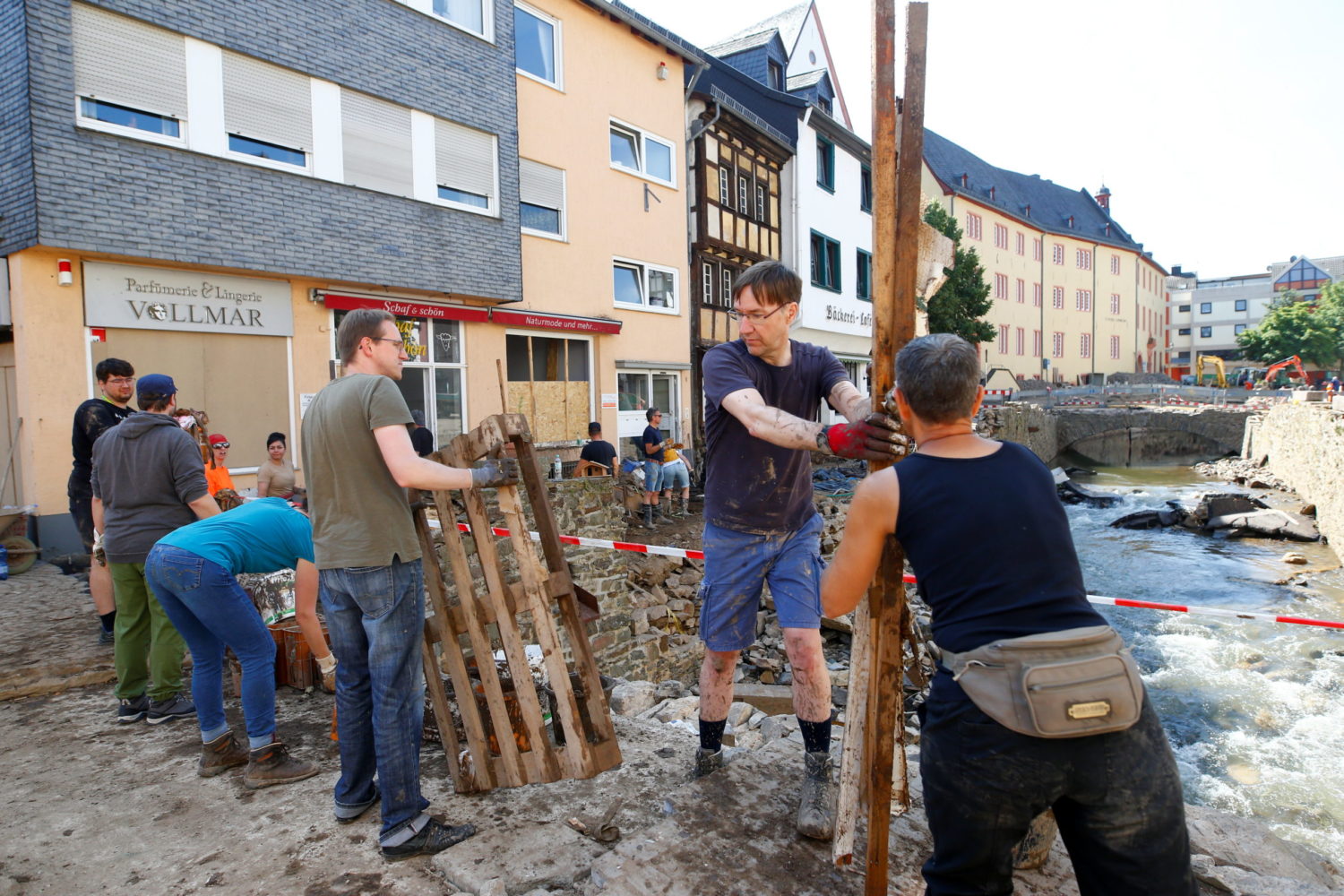 By Kirsti Knolle and Riham Alkousaa

BERLIN (Reuters) – A relief official dampened hopes on Wednesday of finding more survivors in the rubble of villages devastated by floods in western Germany, as a poll showed many Germans felt policymakers had not done enough to protect them.

More than 170 people died in last week’s flooding, Germany’s worst natural disaster in more than half a century, and thousands went missing.

“We are still looking for missing persons as we clear roads and pump water out of basements,” Sabine Lackner, deputy chief of the Federal Agency for Technical Relief (THW), told Redaktionsnetzwerk Deutschland.

Any victims found now are likely to be dead, she said.

One woman in Insul, in the rural Eifel region, said people had emerged from their houses like ghosts last week to see whether their neighbors were alive. In the Ahrweiler district, of which Insul is part, 123 people died.

For immediate relief, the federal government will initially provide up to 200 million euros ($235.5 million) in emergency aid, and Finance Minister Olaf Scholz said more funds can be made available if needed.

That will come on top of at least 250 million euros provided by the affected states to repair buildings and damaged local infrastructure and to help people in crisis situations.

Scholz said the government would contribute to the cost of rebuilding infrastructure such as roads and bridges. The full extent of the damage is not clear, but Scholz said that rebuilding after previous floods cost about 6 billion euros.

The floods have dominated the political agenda before a national election in September and raised uncomfortable questions about why Europe’s richest economy was caught flat-footed.

Two-thirds of Germans believe that federal and regional policymakers should have done more to protect communities from flooding, a survey by the INSA institute for German mass-circulation paper Bild showed on Wednesday.

Interior minister Horst Seehofer, who faced calls from opposition politicians to resign over the high death toll, said there would be no shortage of money for reconstruction.

“That is why people pay taxes, so that they can receive help in situations like this. Not everything can be insured,” he told a news conference.

Insured losses from the floods may total 4 billion to 5 billion euros ($4.7-5.9 billion), said the GDV insurance industry association. Damage in the states of North Rhine-Westphalia and Rhineland-Palatinate is likely to exceed the 4.65 billion euros recorded after a deluge in August 2002, it said.

The estimate does not include losses from the southern German state of Bavaria and in Saxony in the east last weekend.

Only around 45% of homeowners in Germany have insurance that covers flood damage, according to the GDV, triggering a discussion about the need for compulsory insurance.

“As the time interval between heavy natural disasters gets shorter and shorter, one needs a debate about a protection scheme and how it could be designed,” Seehofer said.

Economy Minister Peter Altmaier told Deutschlandfunk radio aid would include funds to help businesses such as restaurants or hair salons make up for lost revenue.