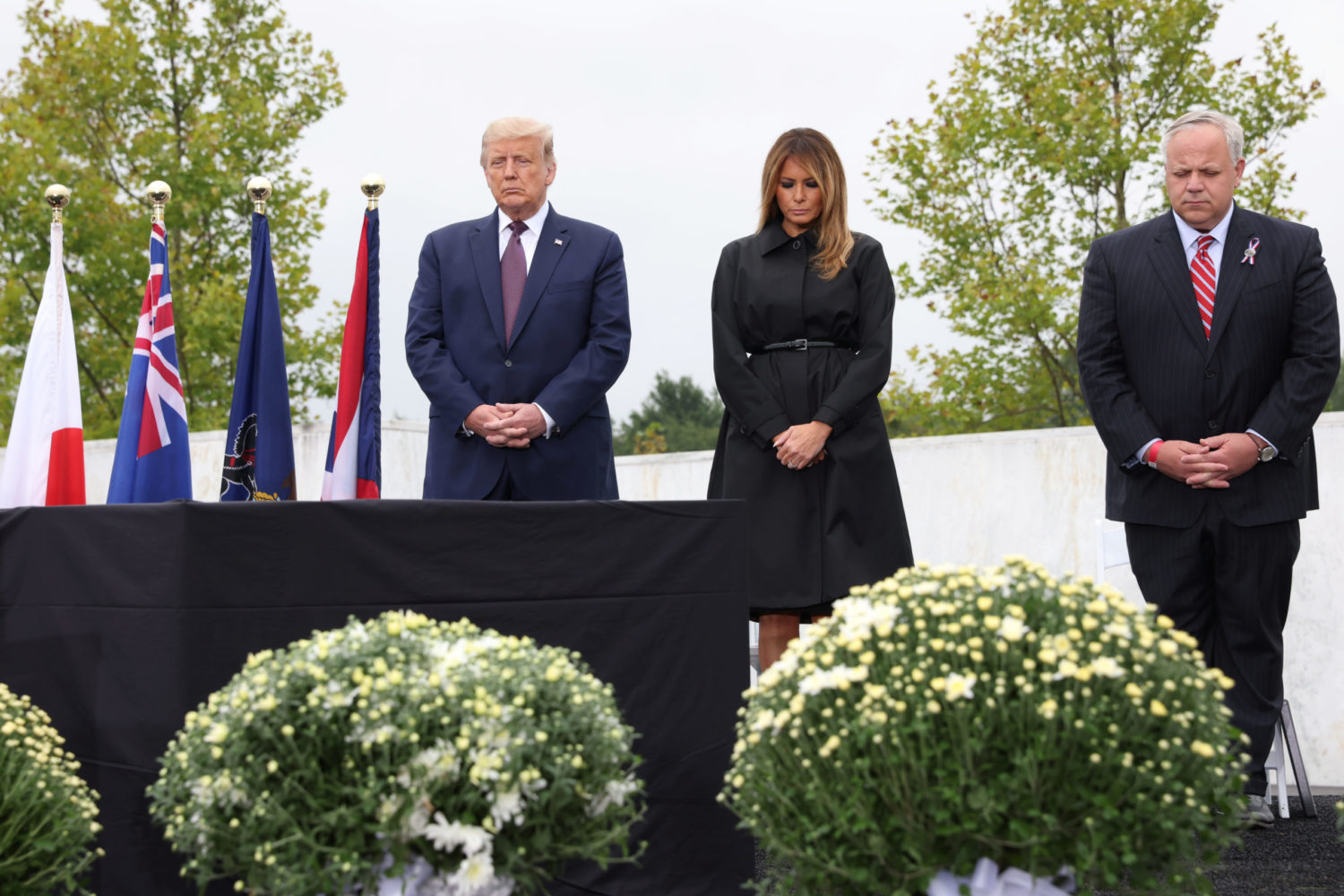 Biden and Pence bumped elbows in greeting, one of the many ways the anniversary ceremony has been changed by the coronavirus pandemic, which has killed more than 191,000 people in the United States including 32,700 in New York state.

About 200 people including Governor Andrew Cuomo and U.S. Senator Chuck Schumer joined the New York ceremony, where family members read the names of the nearly 3,000 people killed when two hijacked jets slammed into the Twin Towers, with a third hitting the Pentagon and a fourth taken down in Shanksville, Pennsylvania, when its passengers rose up against the al Qaeda hijackers.

A similar memorial ceremony was being held at the Pentagon and in Shanksville, where people sat socially distanced on folding chairs near the site that Flight 93 went down.

“The only thing that stood between the enemy and a deadly strike at the heart of American democracy was the courage and resolve of 40 men and women – the amazing passengers and crew of Flight 93,” Trump told the crowd.

Biden is also due to visit Shanksville separately later in the day. Prior to boarding a plane from his Delaware home, Biden pledged not to make any news during the solemn day.

“I’m not going to talk about anything other than 9/11. We took all our advertising down. It’s a solemn day, and that’s how we’re going to keep it, okay?,” Biden said.

‘IT NEVER GOES AWAY’

The sun struggled to pierce hazy clouds in New York, a contrast with the 2001 morning of the attacks, which people present that day remember for its piercing, clear skies.

At the memorial site, Biden spoke to 90-year-old Maria Fisher, who lost her son in the 9/11 attacks. He told her he lost his son as well, and lamented, “It never goes away, does it?”

He handed her the rose he was holding.

Asked what today means for him, Biden replied, “It means I remember all my friends that I lost.”

The ruins of the shattered World Trade Center have since been replaced by a glittering $25 billion complex that includes three skyscrapers, a museum and the memorial with the goal that it would be again be an international hub of commerce.

But the pandemic has rendered it somewhat of a small ghost town, adding an eerie quality to the commemoration of the attack, with office workers staying home and tourists avoiding the memorial site.

The virus also altered the memorial event, with family members pre-recording the traditional reading of the names of the victims and the crowds at the site severely restricted.

Amanda Barreto, 27, of Teaneck, New Jersey, lost her godmother and aunt in the attacks. Biden came up to her and offered his condolences.

“He knows what it means to lose someone. He wanted me to stay strong,” Barreto said afterward. “And he’s so sorry for my loss.”

The Shanksville event was also closed to the public because of coronavirus concerns, the National Park Service said.

Flight 93, bound for San Francisco from Newark, New Jersey, never hit its intended target — the four hijackers were believed to be planning to crash it into either the U.S. Capitol or the White House — after passengers stormed the cockpit and attempted to regain control of the aircraft.