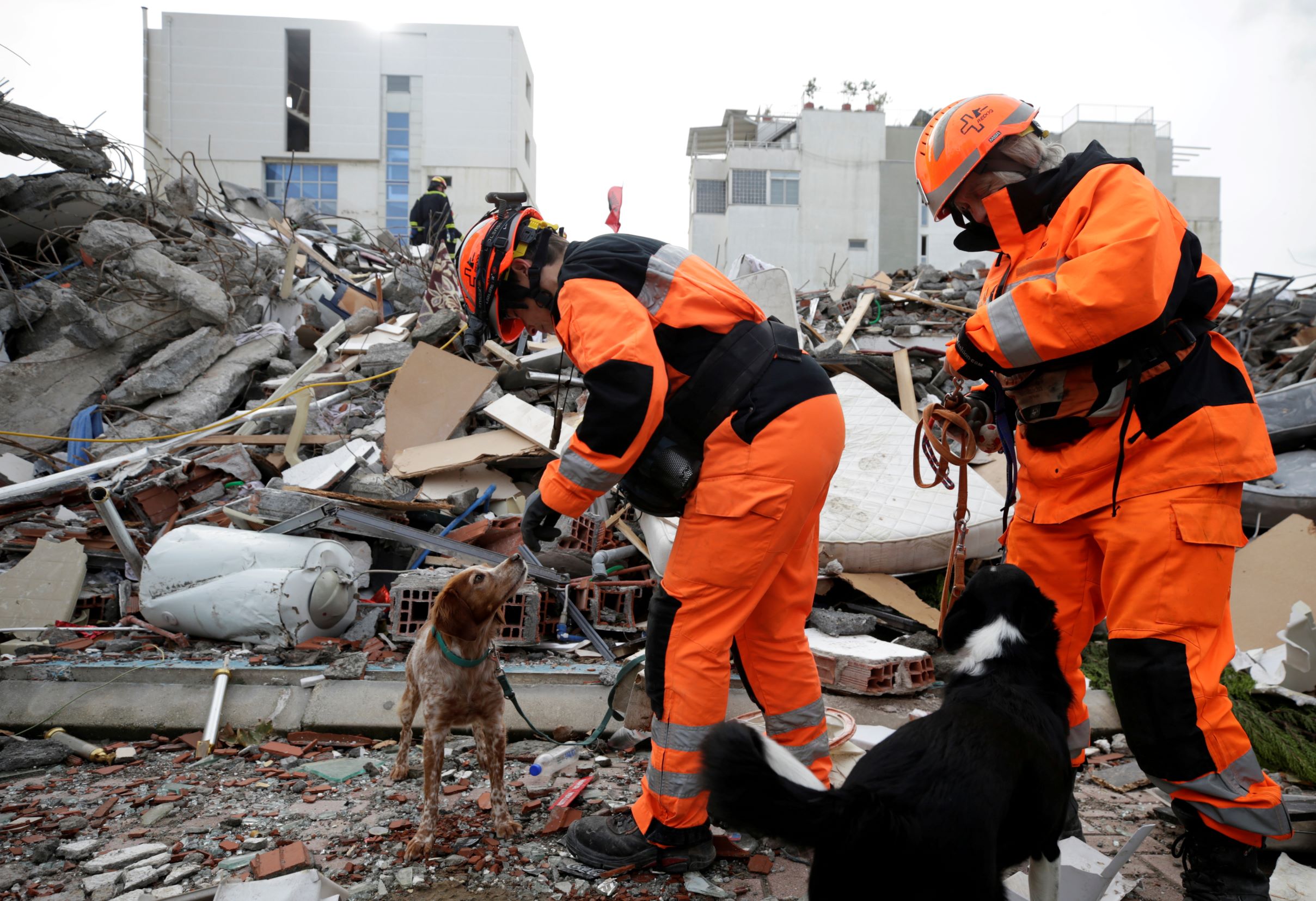 DURRES, Albania (Reuters) – Rescue workers sifted through the rubble of a hotel by the Adriatic Sea for possible survivors on Friday, three days after a 6.4-magnitude destroyed the six-storey building and many others in the Albanian port of Durres and surrounding areas.

The death toll from the quake, Albania’s worst ever, has reached 49. There have been more than 500 aftershocks since Tuesday’s quake, some with a magnitude of more than 5.0, rocking already damaged buildings and terrifying residents.

The sea-front hotel, the Mira Mare, is now the only site where rescue work is still continuing. The search teams, from neighboring Serbia, Montenegro and North Macedonia, said a female dancer was believed to be buried beneath the rubble.

Nearby, another hotel, the Ljubljana, was leaning to one side, its ornamental Roman columns cracked. Shattered glass and a toppled potted plant lay strewn across what had been its reception area.

A woman pushed a pushchair piled high with bags of what appeared to be possessions she had managed to rescue from the wreckage of her home.

“At the moment when the earthquake struck, I wasn’t scared at all. But when I went out, and saw the horror, I became petrified,” said Durres resident Tahir Halili.

“Even now, as we speak, I am not at all well. When I saw all that destruction, that hell, all those lost lives, my friend, it is unbelievable.”

Albanian Prime Minister Edi Rama said 25 people had died in Durres, 23 in the northern town of Thumane and one in the town of Lac. The quake damaged more than 700 houses in Durres, destroyed 12 more and left nearly 200 apartment buildings with cracks and fissures, he said.

Rama extended a 30-day state of emergency already in force in Durres and Thumane to Lac. A family of six was due to be buried in Thumane on Friday.

More than 5,000 people have been left homeless by the quake, Rama said. They are being housed in hotels, schools, gyms and other temporary accommodation.

“Do not stay at home if it is damaged,” Defence Minister Olta Xhacka appealed to citizens during a news conference.

“We are able to offer shelter, food and clothing. The quality of life and health of citizens is our concern and life in tents is temporary.” 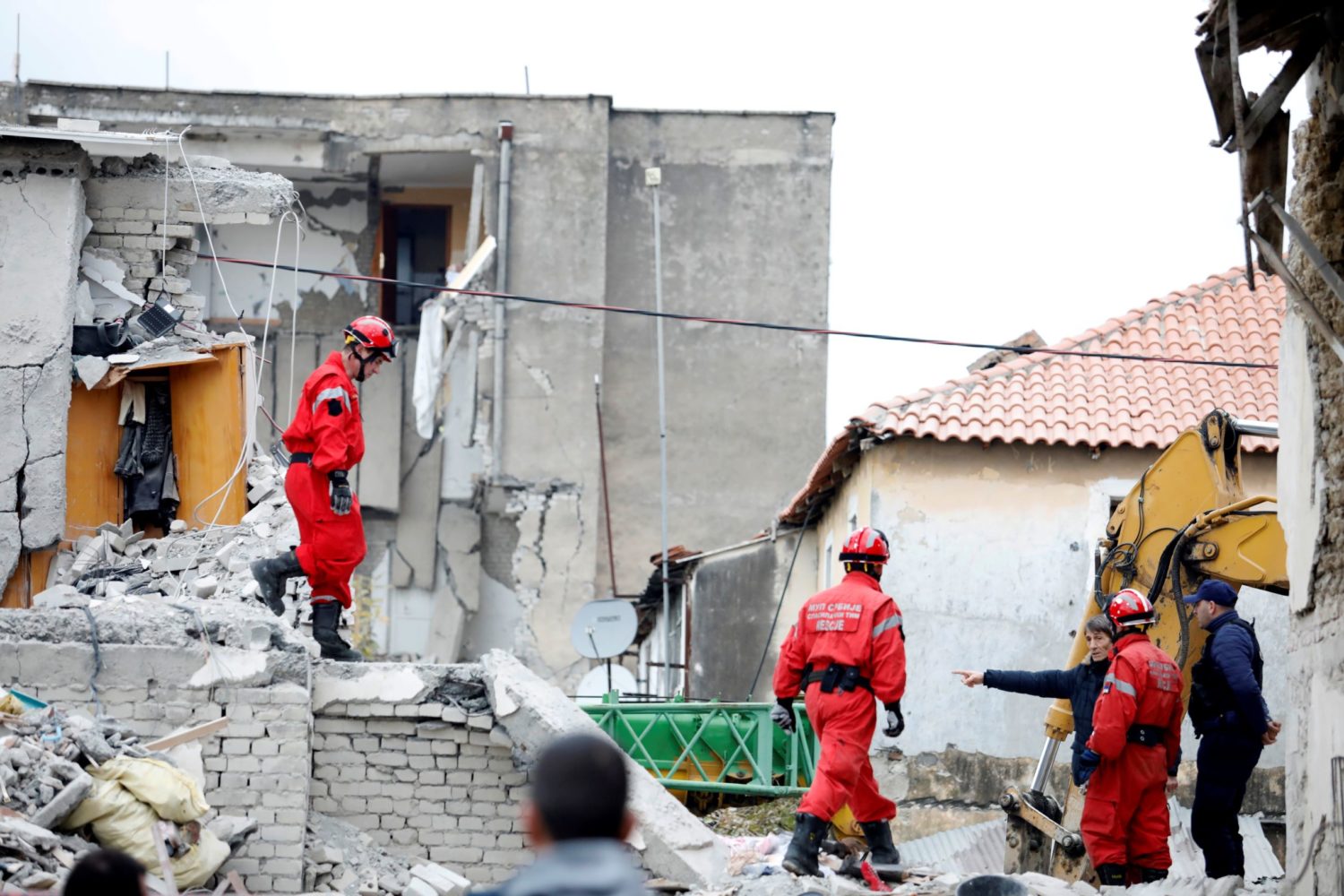 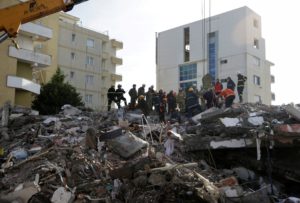 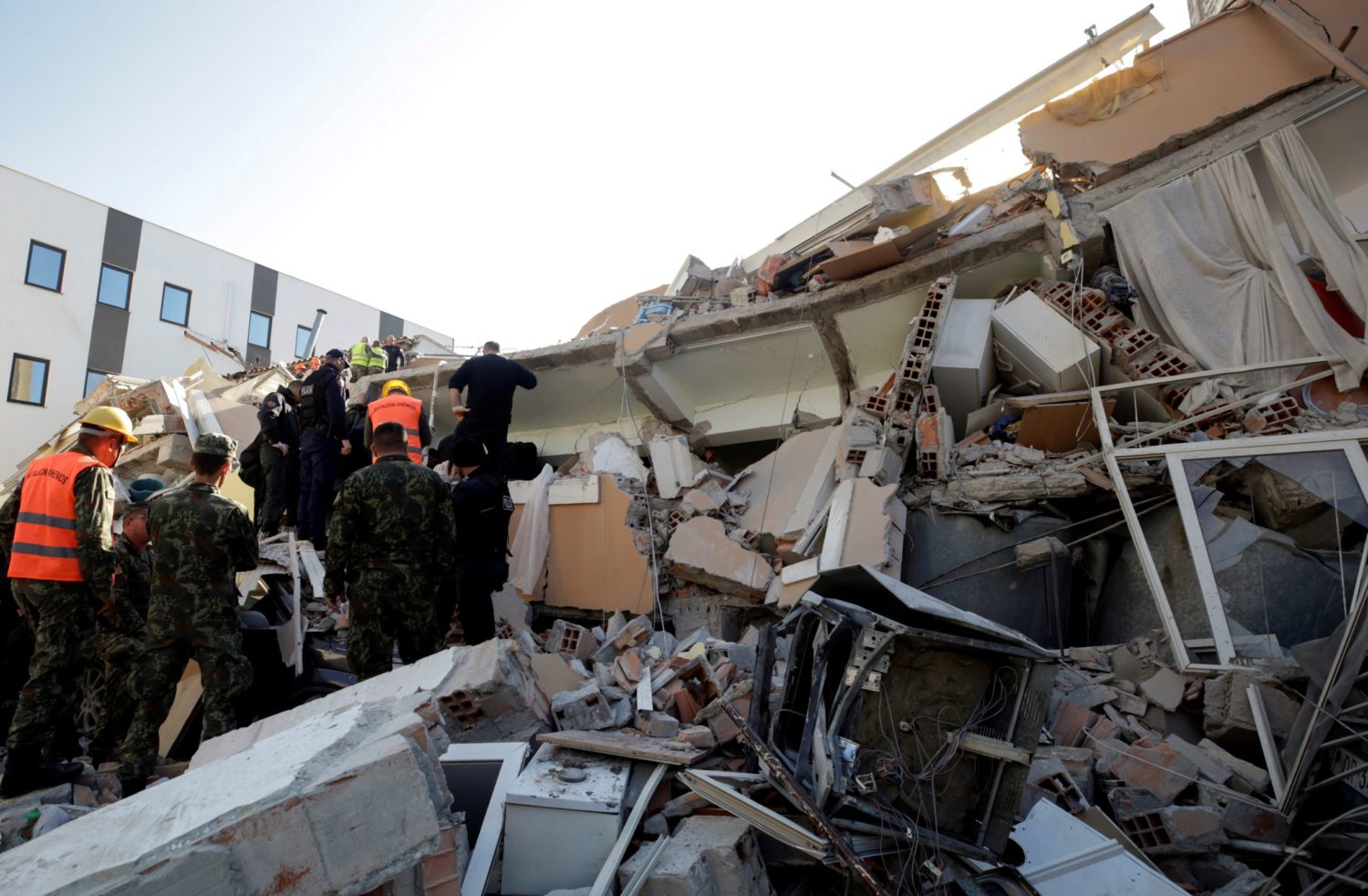 By Benet Koleka and Fatos Bytyci

TIRANA/THUMANE (Reuters) – At least 13 people were killed when the most powerful earthquake to hit Albania in decades shook the capital Tirana and the country’s west and north on Tuesday, tearing down buildings and burying residents under rubble.

Residents, some carrying babies, fled apartment buildings in Tirana and the western port of Durres after the 6.4 magnitude quake struck shortly before 4 a.m. (0300 GMT).

In the northern town of Thumane, Marjana Gjoka, 48, was sleeping in her apartment on the fourth floor of a five-storey building when the quake shattered the top floors.

“The roof collapsed on our head and I don’t know how we escaped. God helped us,” said Gjoka, whose three-year-old niece was among four people in the apartment when the quake struck.

The quake was centered 30 km (19 miles) west of Tirana, the U.S. Geological Survey (USGS) said, and was also felt across the Balkans and in the southern Italian region of Puglia.

Hours later a magnitude 5.4 earthquake hit Bosnia, with an epicentre 75 km (45 miles) south of Sarajevo, monitors said. There were no immediate reports of injuries.

Five people were found dead in the rubble of apartment buildings in the northern Albanian town of Thumane and a man died in the town of Kurbin after jumping out of a building, a Defence Ministry spokeswoman said.

Seven bodies were pulled from collapsed buildings in Durres, the main port and tourism destination, the Defence Ministry said, adding 39 had been pulled out alive from under the ruins.

Firefighters, police and civilians were removing the debris from collapsed buildings in Thumane. Most of the buildings that collapsed were built of bricks, a Reuters reporter said.

Rescuers in Thumane used a mechanical digger to claw at collapsed masonry and remove a tangle of metal and cables. Others groped with bare hands to clear rubble.

Two people were pulled from rubble in Thumane four hours after the quake, a Reuters reporter said. Doctors said they were in a bad condition.

“Everything at home kept falling down,” Refik, a Tirana resident, said of the impact on his sixth-floor apartment.

“We were awake because of the previous quakes, but the last one shook us around,” he told Reuters, referring to smaller tremors recorded in the hour before the main quake.

Rescuers told local media one of the dead was an elderly woman who saved her grandson by cradling him with her body.

Xhacka said the quake’s epicentre was in Durres. It was followed by 100 aftershocks.

“Durres and Thumane are the areas worst hit. Rescue-and-save work continues in the collapsed buildings there,” she said as troops pulled a victim from a hotel in Durres.

At least 135 people were injured, with 72 hospitalized, Xhacka said. Two planes from fellow NATO-member Romania were expected to land with specialized search and rescue equipment and help was coming from Italy and Turkey, Xhacka said.

“Firefighters and army staff are helping residents under the rubble”, in Durres and Thumane, the Defence Ministry said.

An unidentified man, with a wound dressing on his right cheek, told News24 TV his daughter and niece were among those trapped in a collapsed apartment building in Durres.

“I talked with my daughter and niece on the phone. They said they are well and are waiting for the rescue. Could not talk to my wife. There are other families, but I could not talk to them,” the man said.

Located along the Adriatic and Ionian Seas, between Greece and Macedonia, Albania experiences regular seismic activity.

An earthquake of 5.6 magnitude shook the country on Sept. 21, damaging around 500 houses and destroying some. The Defence Ministry had said it was the most powerful quake in Albania in the last 30 years.

The images of collapsed buildings in urban areas suggested Tuesday’s quake was more powerful than one in 1979 which razed a neighborhood of a northern town. Neither of those two earlier earthquakes caused fatalities.

The Balkan nation is the poorest country in Europe, with an average income of less than a third of the European Union average, according to Eurostat data.

(Reporting by Benet Koleka in Tirana and Fatos Bytyci in Thumane; Writing by William Maclean; Editing by Janet Lawrence)