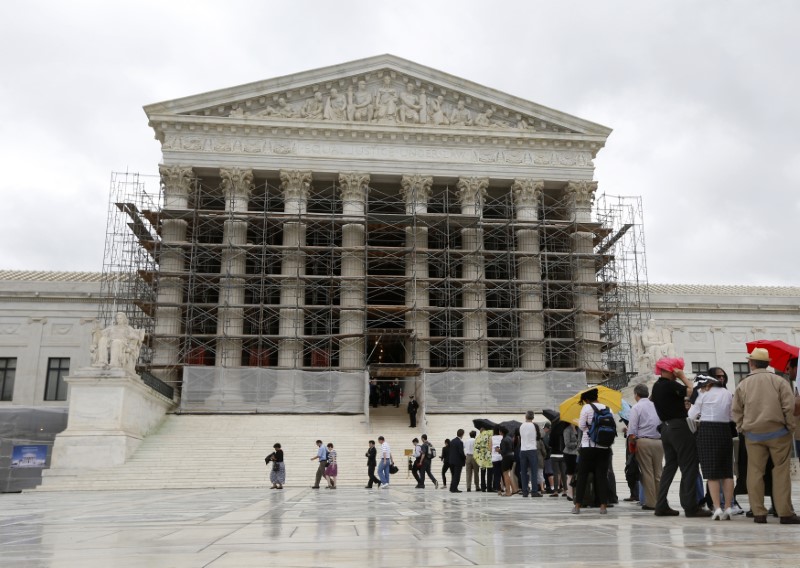 WASHINGTON (Reuters) – In a setback to abortion rights advocates, the U.S. Supreme Court on Tuesday paved the way for Republican-backed restrictions on medication-induced abortions to take effect in Arkansas that could lead to the shuttering of two of the state’s three abortion clinics.

The nine justices, with no noted dissents, declined to hear an appeal by abortion provider Planned Parenthood of a lower court ruling that had revived the state law, which sets regulations regarding the RU-486 “abortion pill,” after it was earlier struck down by a federal judge. The law had remained blocked pending the outcome of the appeal to the Supreme Court.

The high court’s action may not be the final word on the matter. Planned Parenthood can still ask a judge to reimpose the injunction blocking the law.

The Supreme Court in 1973 legalized abortion nationwide, but many Republican-governed states have passed laws seeking to impose a variety of restrictions, some so demanding that they may shut down abortion clinics and make the procedure far more difficult to obtain.

The justices, in a 2016 ruling, struck down a restrictive Republican-backed Texas law that had targeted abortion clinics and doctors in a decision that was seen as reaffirming and fortifying legal protections for abortion rights. Planned Parenthood had claimed the appeals court ruling in the Arkansas case had disregarded the precedent set in the Texas case.

The St. Louis-based 8th U.S. Circuit Court of Appeals restored the law last year, reversing a 2016 ruling by a district court judge that had prevented it from going into effect.

Planned Parenthood Great Plains, which runs two of the three clinics that provide abortions in Arkansas, sued the state in 2015, saying the law would deprive many Arkansas women of their legal right to an abortion.

The law involves the RU-486 “abortion pill,” also called mifepristone (brand name Mifeprex) and misoprostol (brand name Cytotec). It requires any doctor dispensing the drug to sign a contract with another doctor who would agree to handle any medical complications from it, an unusual and difficult-to-achieve arrangement. The contracted doctor also must have admitting privileges at a hospital designated to handle emergencies.

Arkansas said the law was aimed at protecting women against the “dangerous and potentially dangerous” off-label use of the abortion pills.

RU-486 was approved by the U.S. Food and Drug Administration in 2000 subject to the instructions stated on the label. The “off-label” use prohibited by Arkansas allowed for less physician oversight when RU-486 is used. Planned Parenthood, which offers only medication-induced abortions at its two facilities in Arkansas, said the effect of the law would be to ban such abortions in the state.

The only other abortion clinic in the state, Little Rock Family Planning Services in the state capital, offers both surgical and medication abortions. The district court judge had found that women in Fayetteville, for example, would then have to make two 380-mile (610-km) round trips to get an abortion at what would be the state’s last remaining abortion clinic.

The state’s lawyers said the Arkansas law differs from the Texas law as it does not require the doctors who provide abortions to have hospital admitting privileges. They also said the abortion providers failed to provide evidence that a significant number of women would be adversely affected.

In 2013, the Supreme Court left intact an Oklahoma court ruling that struck down a state law that would have effectively banned RU-486.

In the Supreme Court’s current term, which runs through the end of June, the justices are weighing another abortion-related case in which operators of Christian-affiliated “crisis pregnancy centers” that steer women with unplanned pregnancies away from abortion are challenging a California law that requires them to post notices telling women about the availability of state-subsidized abortions.