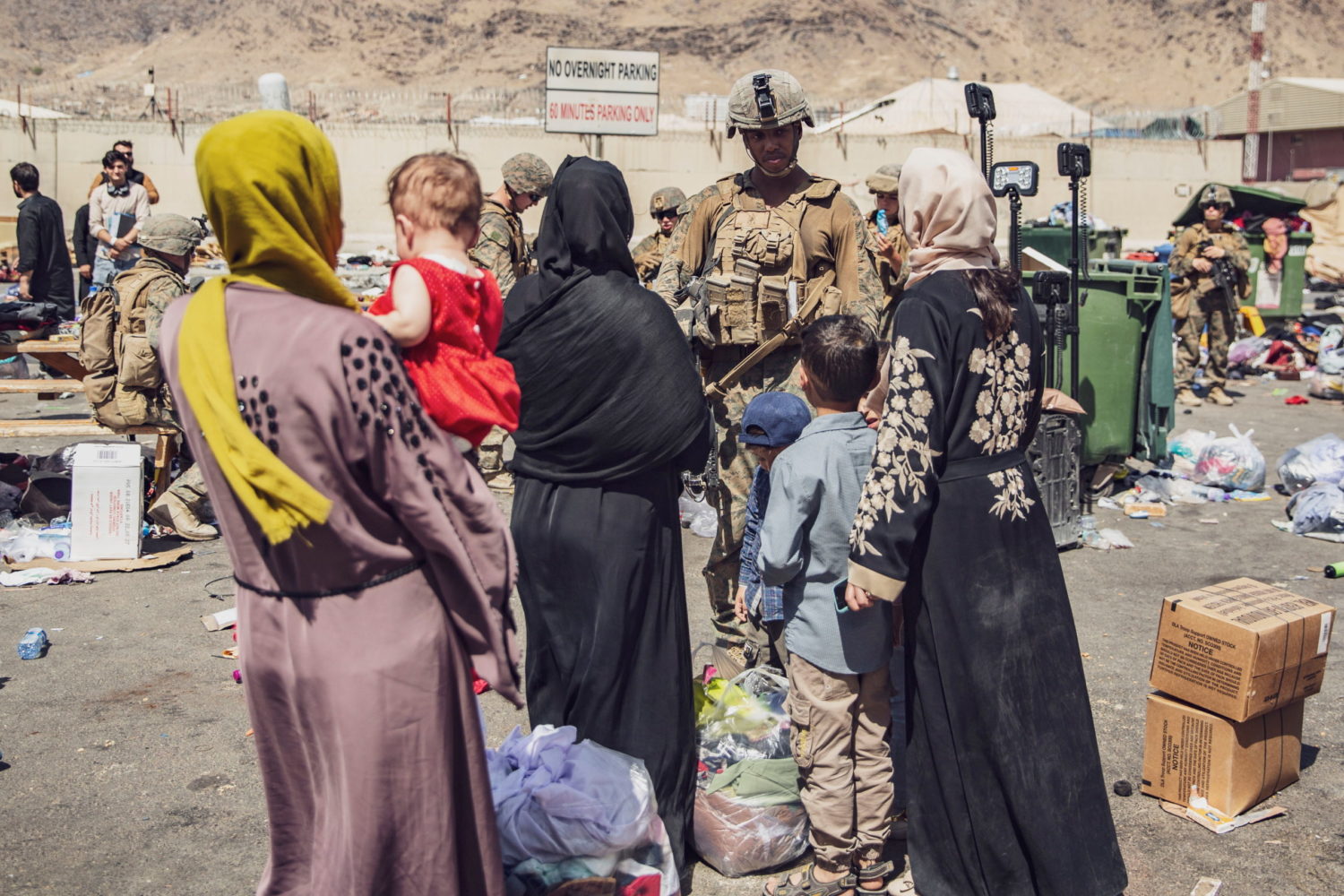 WASHINGTON (Reuters) – The United States may have left behind the majority of Afghans who helped in the 20-year war effort along with their families as U.S. citizens were prioritized in the airlift that came to an end this week, a senior State Department official said on Wednesday.

The departure of the last U.S. military flights out of Kabul on Monday marked the end of an operation that saw more than 123,000 people brought out of Afghanistan in less than two weeks.

President Joe Biden has pledged to keep helping 100 to 200 U.S. citizens left in the country who wanted to leave and a much larger group of at-risk Afghans, including former interpreters for the U.S. military.

Asked how many potential applicants to the Special Immigrant Visa (SIV) program for Afghan allies and their families remained in Kabul, a senior State Department official said they could not provide an estimate.

“But I would say it’s the majority of them just based on anecdotal information about the populations we were able to support,” the official said. About 2,000 SIV applicants were brought to the United States before the broader airlift began in mid-August.

Initial efforts to prioritize those Afghans for evacuation were marred by security concerns at the airport gates and difficulties in giving them credentials that could not be replicated, the official said.

U.S. officials had a legal obligation to help American citizens who were stuck in Kabul and prioritized their departure, the official said. About 5,500 U.S. citizens were on evacuation flights from Kabul after Aug. 14, according to the State Department.

“Everybody who lived it is haunted by the choices we had to make and by the people we were not able to help depart in this first phase of the operation,” the official said. 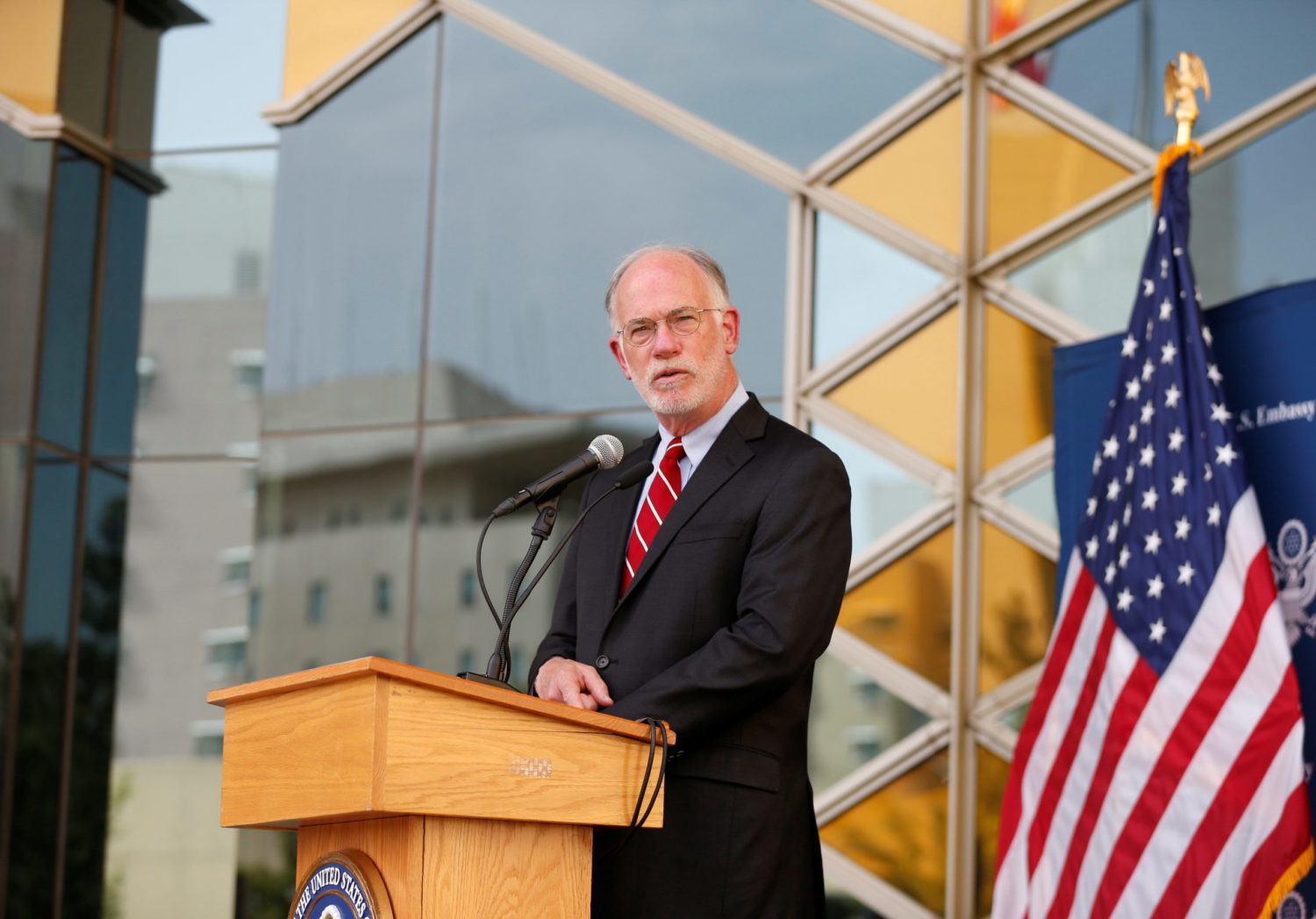 WASHINGTON (Reuters) -Some 200 Afghans were set to begin new lives in the United States on Friday as an airlift got under way for translators and others who risk Taliban retaliation because they worked for the United States during its 20-year war in Afghanistan, U.S. officials said.

The first planeload of 200 evacuees arrived at Fort Lee, a military base in Virginia, for final paperwork processing and medical examinations.

The Afghans are being granted Special Immigrant Visas (SIV) entitling them to bring their families. As many as 50,000 or more people ultimately could be evacuated in “Operation Allies Refuge.”

“These arrivals are just the first of many as we work quickly to relocate SIV-eligible Afghans out of harm’s way — to the United States, to U.S. facilities abroad, or to third countries — so that they can wait in safety while they finish their visa applications,” President Joe Biden said in a statement.

Secretary of State Antony Blinken said in a separate statement that the U.S. would continue to use “the full force of our diplomatic, economic, and development toolkit” to support the Afghan people after the United States’ longest war.

The first group of arrivals is among some 2,500 SIV applicants and family members who have almost completed the process, clearing them for evacuation, said Russ Travers, Biden’s deputy homeland security adviser.

The Afghans were expected to remain at Fort Lee for up to seven days before joining relatives or host families across the country.

The evacuees underwent “rigorous background checks” and COVID-19 tests, Travers added. Some were already vaccinated, and the rest will be offered shots at Fort Lee.

Around 75,000 other Afghans have been resettled in the United States in the last decade, he said in a statement, adding there is a “moral obligation” for the country “to help those who have helped us.”

The surging violence in Afghanistan has created serious problems for many SIV applicants whose paperwork is in the pipeline amid reports – denied by the Taliban – that some have been killed by vengeful insurgents.

Some applicants are unable to get to the capital Kabul to complete the required steps at the U.S. embassy or reach their flights.

The SIV program has also been plagued by long processing times and bureaucratic knots that led to a backlog of some 20,000 applications. The State Department has added staff to handle them.

The majority of those would likely miss out on the airlift operation, including the roughly 50% who were in the early stages of the process as the clock counts down towards the U.S. withdrawal by September.

Applicants in that group have held multiple protests in Kabul in recent months and they and advocates say they face the risk of violence while they wait that will be heightened once troops withdraw.

Ross Wilson, Charge D’Affaires of the U.S. Embassy in Kabul, told reporters that after the initial round of flights taking out those who received security clearances, around 4,000 applicants and their families who were in the later stages but still needed interviews would be taken somewhere outside the United States for processing.

That left roughly 15,000 applicants in earlier stages waiting in Afghanistan.

“We’ve felt it appropriate that we focus our energies on those parts of the SIV applicant pool who have demonstrated that they meet the criteria under the law and then work to relocate them,” he said, adding efforts were taking place in Washington to help early-stage applicants access documents.

Adam Bates, policy counsel for the International Refugee Assistance Project, which provides legal aid for refugees, said the United States had had 20 years to anticipate what the withdrawal would look like.

“It’s unconscionable that we are so late,” he said.

Kim Staffieri, co-founder of the Association of Wartime Allies, which helps SIV applicants, said surveys conducted over Facebook show that about half of the applicants cannot reach Kabul, including many approved for evacuation.

Wilson said that they believed the “overwhelming majority” of people the airlift was offered to were able to get to Kabul.

“We’re focusing our efforts on those that we can get out,” he said. “We cannot through this program solve every problem in this country.”

Congress created SIV programs in 2006 for Iraqi and Afghan interpreters who risked retaliation for working for the U.S. government. 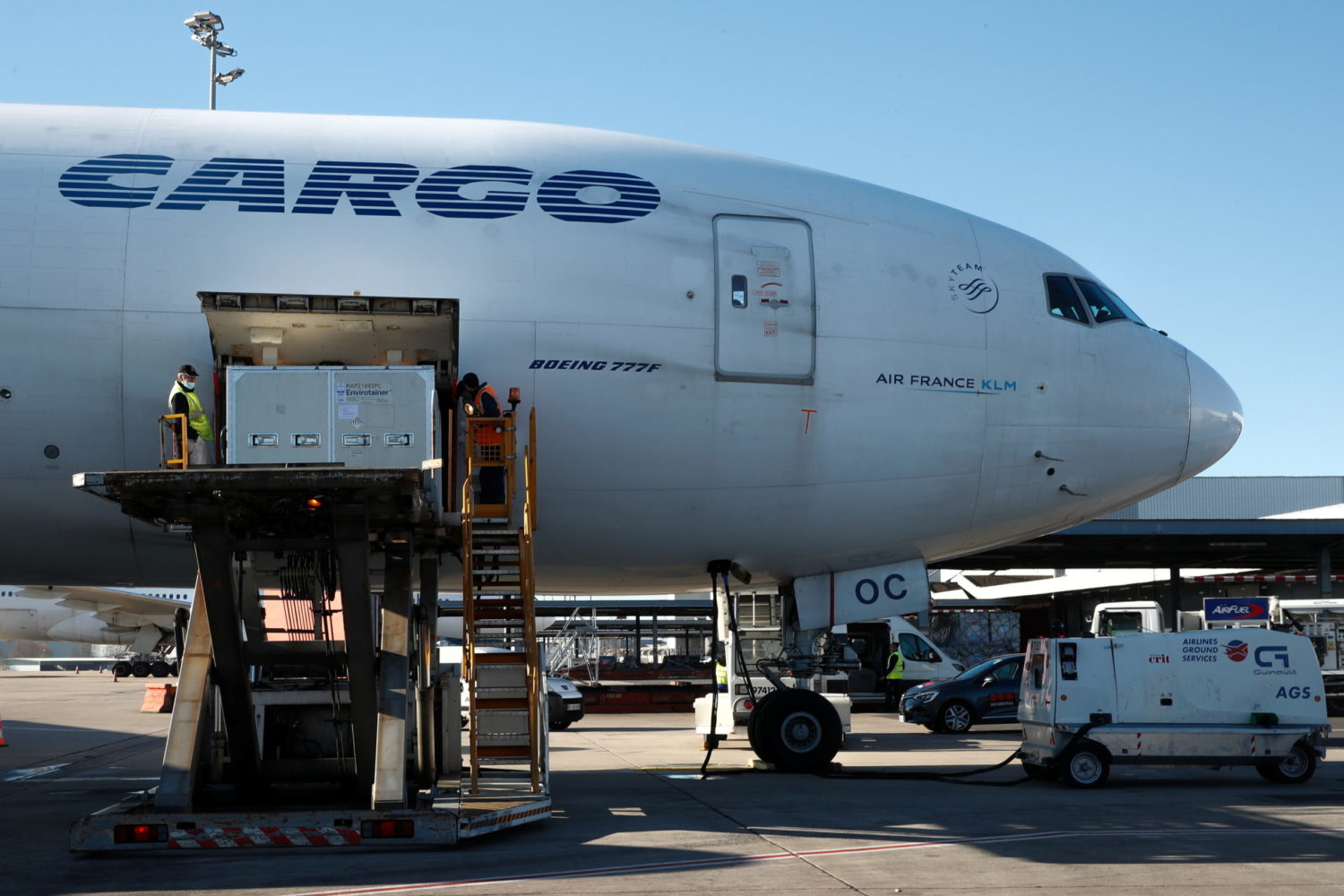 PARIS (Reuters) – Air France-KLM is among airlines gearing up for the challenge of transporting millions of doses of temperature-sensitive COVID-19 vaccines in the midst of a travel slump.

Breakthrough vaccines developed by Pfizer and Moderna have yet to win final approval, but the drugmakers, their logistics and cargo providers are not waiting for a green light to activate freight plans.

Air France-KLM, which has decades of experience shipping medicines and vaccines in temperature-controlled conditions, is preparing a test run in coming days to fly out dummy vaccine shipments from KLM’s Amsterdam-Schiphol hub.

The task is complicated by the conditions required by the Pfizer and Moderna shots – with respective storage temperatures of minus 80 Celsius and minus 20C.

“Another difficulty is the temperature control,” Boucher said in an interview at Paris-Charles de Gaulle airport – where cargo specialists were preparing to load consignments of super-cooled rabies vaccines bound for Brazil.

The COVID-19 airlift is being planned amid a partial shutdown of global air travel. Airlines have warned that travel curbs could hamper the effort, since around 45% of global cargo typically travels in passenger plane holds.

Air France-KLM does not rule out bringing idled jets back into service for the vaccine shipments, pharma cargo manager Florent Gand said. “We have some planes currently grounded that we can use if necessary to transport the COVID-19 vaccines around the world.” 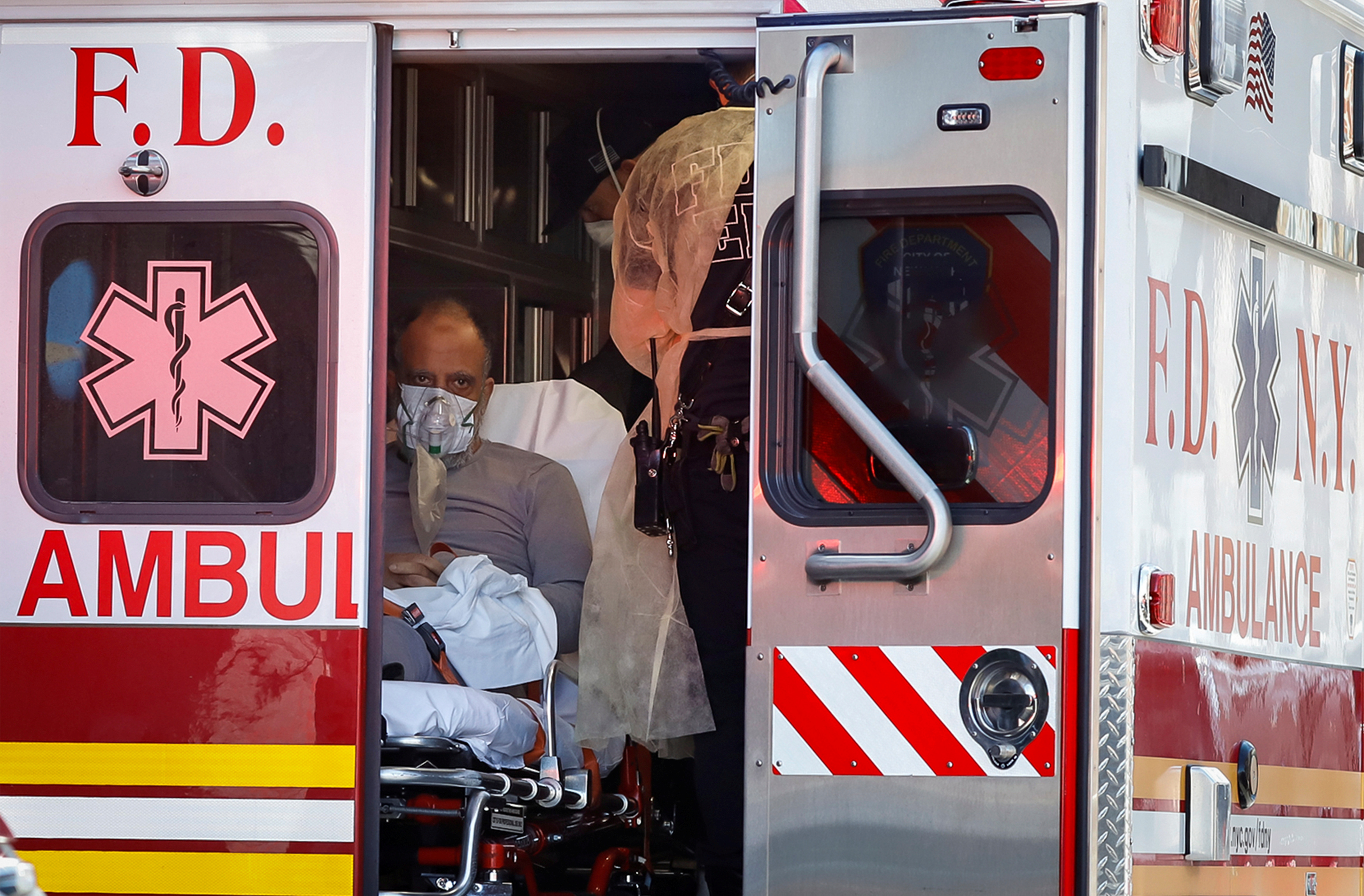 WASHINGTON (Reuters) – A planeload of desperately needed medical supplies arrived in New York from China on Sunday, the first in a series of flights over the next 30 days organized by the White House to help fight the coronavirus, a White House official said.

The airlift is a product of a team led by White House senior adviser Jared Kushner, which formed “Project Airbridge,” a partnership between large U.S. healthcare distributors such as McKesson Corp, Cardinal, Owens & Minor, Medline and Henry Schein Inc, and the federal government.

Representatives of those companies were to attend a White House meeting later on Sunday with President Donald Trump to discuss the effort, the official said.

The goal is to expedite the arrival of critical medical supplies purchased by the companies over the next 30 days, using planes instead of ships to reduce the shipping time.

“At President Trump’s direction we formed an unprecedented public-private partnership to ensure that massive amounts of masks, gear and other PPE will be brought to the United States immediately to better equip our health care workers on the front lines and to better serve the American people,” Kushner said in a statement.

Trump, accused of initially playing down the threat from the virus, has been searching for supplies to fill the mounting need for equipment to protect healthcare workers caring for COVID-19 patients.

Medical workers across the country are clamoring for equipment to protect themselves from infection as they deal with the flood of virus victims.

FEMA will distribute most of the supplies to New York, New Jersey, and Connecticut with the rest going to nursing homes in the area and other high-risk areas across the country.

“It will be allocated based on need,” the White House official said.

Involved in the effort are the FEMA transportation task force as well as officials at both the U.S. embassy in China as well as the State Department’s East-Asia Pacific team, the official said.