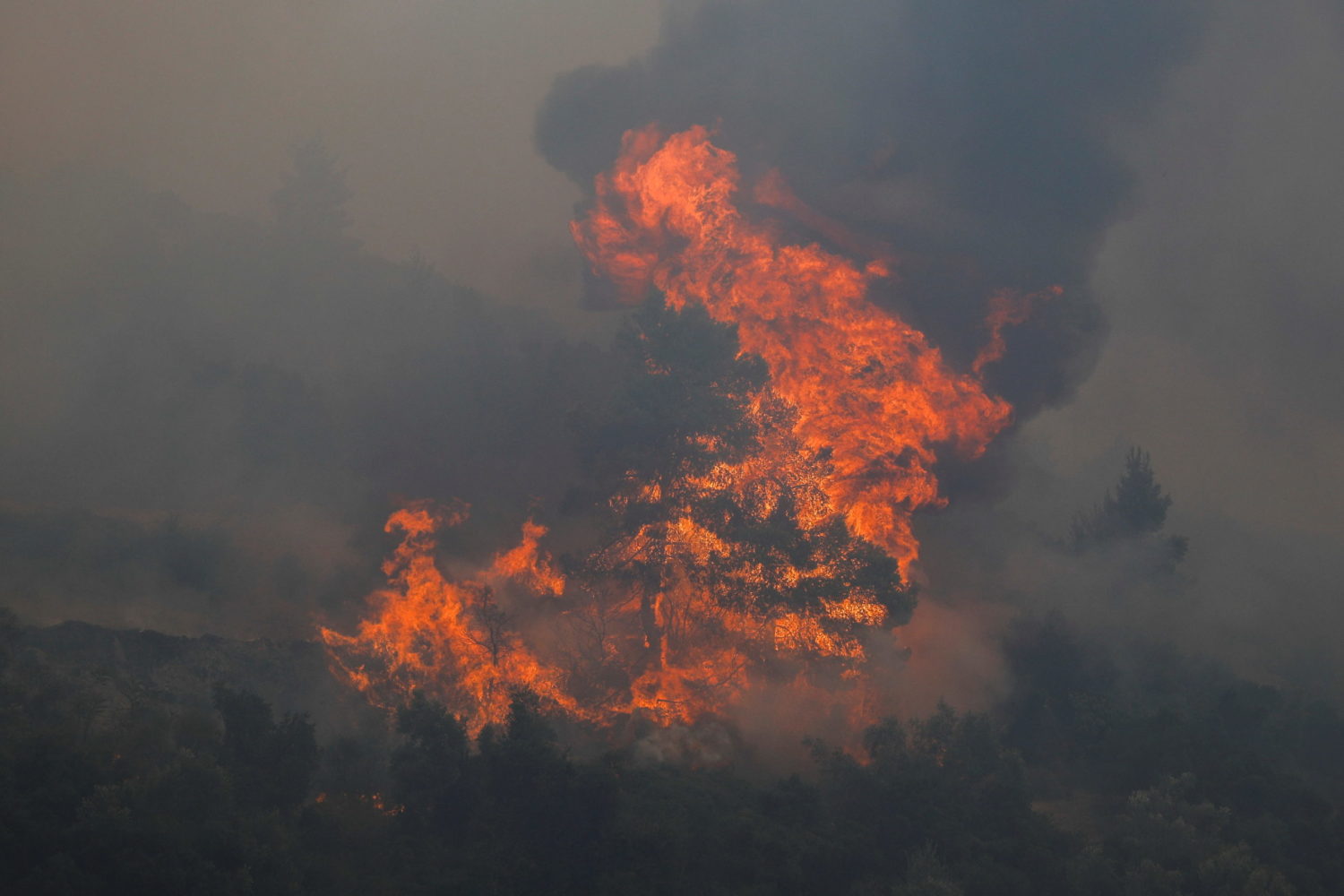 ATHENS (Reuters) -Wildfires in Greece raged into the night burning more forest and homes in the northern outskirts of Athens and other parts of the country and forcing more evacuations as more international aid was on the way.

Authorities struggled with 154 wildfires across the country on Friday with the biggest fronts still burning in the north of Athens, the island of Evia and areas in the Peloponnese including Mani, Messinia and ancient Olympia, the site of the first Olympic Games.

“We are facing another, more difficult night,” Deputy Civil Protection Minister Nikos Hardalias told reporters. “Wildfires of unprecedented intensity and spread, all our forces are fighting the battle day and night to save lives, together with volunteers.”

In the northern part of the island of Evia near Athens, the coast guard evacuated 650 people by boat as wildfires burned through forestland all the way to the shore for the fourth day.

As night approached, firefighters kept battling a continuous resurgence of blazes in the north of Athens which, fanned by strong winds, threatened to engulf the lake of Marathon and go up Mount Parnitha.

Greece, like much of the rest of Europe, has been grappling with extreme weather this summer. A week-long heatwave – its worst in 30 years – has sparked simultaneous wildfires in many parts of the country, burning homes and killing animals as flames tear through thousands of acres of land.

The fire, which broke out on Tuesday, burned around the main highway linking Athens to northern Greece and hundreds of firefighters with water-bombing aircraft battled to contain it.

A 38-year-old man was killed on Friday by a falling electricity pylon in a suburb north of Athens, the hospital where he was treated said.

In neighboring Turkey, authorities are battling the country’s worst-ever wildfires. Flames sweeping through its southwestern coastal regions forced the evacuation of tens of thousands of people. In Italy, hot winds fanned flames on the island of Sicily this week.

Police went door to door on Friday urging people to leave their homes north of Athens. Authorities ordered the evacuation of more suburbs in the north of Athens as the blaze advanced, burning more homes, cars and businesses.

“We are witnessing a catastrophe of historic proportions and climate change is the basic cause,” said Alexis Tsipras, leader of Greece’s main political opposition. “We must support our frontline fighters and all who lost the efforts of a lifetime in a few minutes.”

Temperatures have been over 40 degrees Celsius (104 Fahrenheit) all week and little let up came on Friday with high winds spreading the flames further.

The Athens power grid operator announced staggered power cuts in the surrounding region to ensure there were no major outages in mainland Greece.

In Gytheio in the southern Peloponnese, a coast guard vessel rescued 10 people from a beach as a blaze there flared. Locals made desperate calls for firefighting aircraft.

More foreign help was on the way with Switzerland sending three helicopters, joining other countries, including France, Cyprus, Israel, Sweden and the Ukraine who sent firefighters and water-bombing aircraft, the civil protection minister said.

In the Peloponnese, where firefighters saved Ancient Olympia from a fire this week, the flames left behind scorched earth and dead animals.

“A catastrophe,” said farmer Marinos Anastopoulos. “The fire came around midday with swirling winds and homes were burned, a lot of animals burned to death. Rabbits, sheep, dogs, everything.”