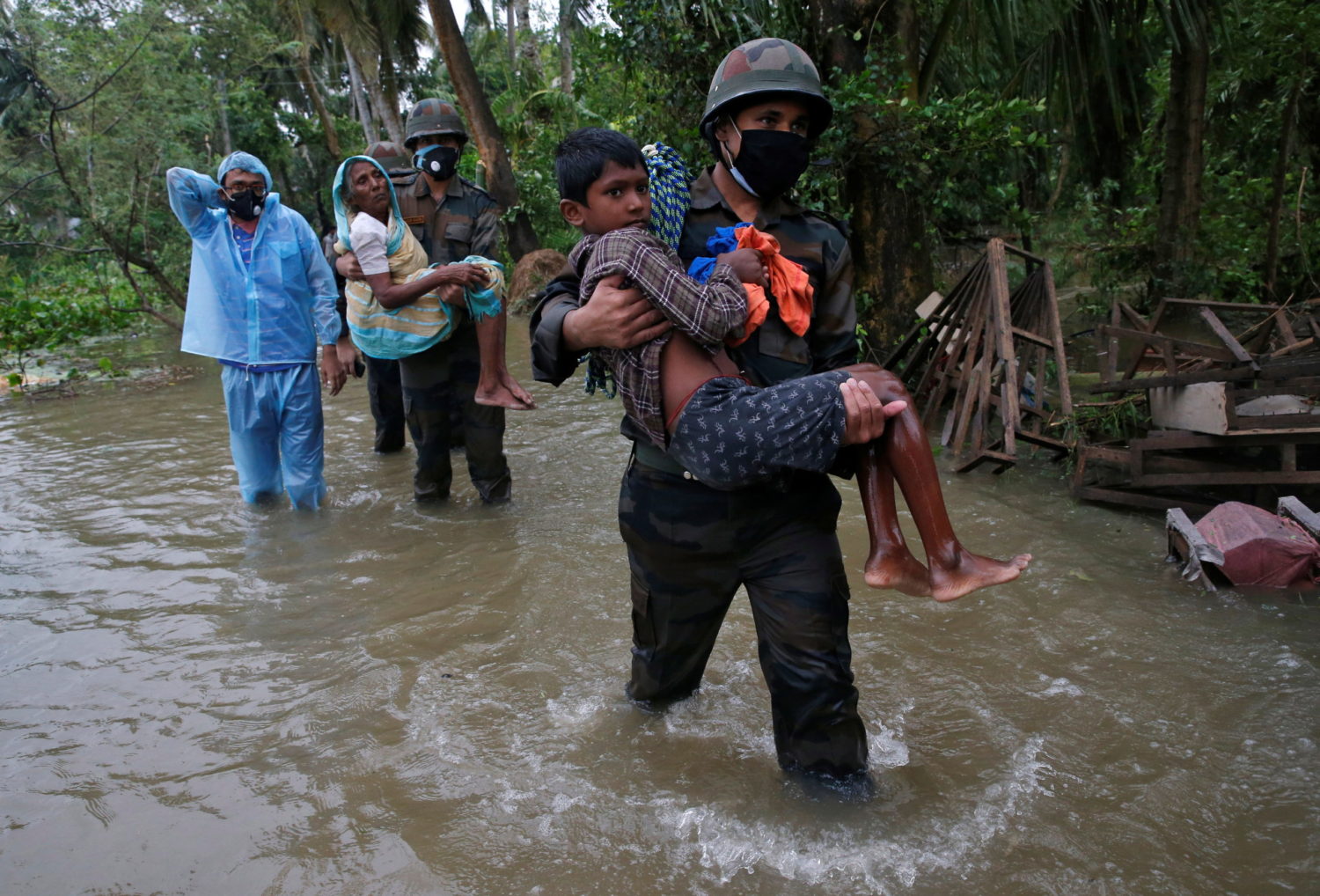 By Jatindra Dash and Subrata NagChoudhury

BHUBANESWAR, India (Reuters) -Storm surges inundated dozens of villages in eastern India on Wednesday after a powerful cyclone moved inland from the Bay of Bengal, damaging thousands of mud homes in two coastal states and killing at least one person, officials said.

Cyclone Yaas was packing gusts of up to 140 kph (87 mph) as it made landfall, days after another storm tore up the western coast, triggering mass evacuations and piling pressure on authorities battling a deadly second wave of the coronavirus.

Authorities said more than a million inhabitants had been moved out of the storm’s path and the busiest regional airport, in the city of Kolkata, had been shut until Wednesday evening.

In the eastern state of Odisha’s Balasore district, where the storm struck early on Wednesday, authorities said 46 villages along the coast had been flooded.

“Most of the villages were empty. The total population would be around 10,000,” K. Sudarshan Chakravarthy, the district’s top government official, told Reuters.

“A large number of villages are under water,” she said.

At least one person had died in the state after a house collapsed, Banerjee said.

“I have not seen anything like this before,” said another state minister, Bankim Hazra, after seawater gushed into low-lying areas of Sagar island in the Bay of Bengal and the tourist town of Digha, where a police station was flooded.

“Successive high tides battered the coastline,” he added. “It is inundation all around and villages are cut off.”

Cyclones in the Bay of Bengal are common at this time of year, and often roar ashore, bringing death and destruction to the coastal areas of both India and neighboring Bangladesh.

The devastating wave of virus infections complicated storm preparations. Odisha officials said they had suspended testing, vaccination and a door-to-door health survey in the three districts in the storm’s path.

Weather officials in Bangladesh said the storm was likely to swamp low-lying areas of 14 coastal districts, bringing tides three to four feet (0.91-1.22 meters) higher than normal. They advised fishing boats and trawlers to stay in shelter. 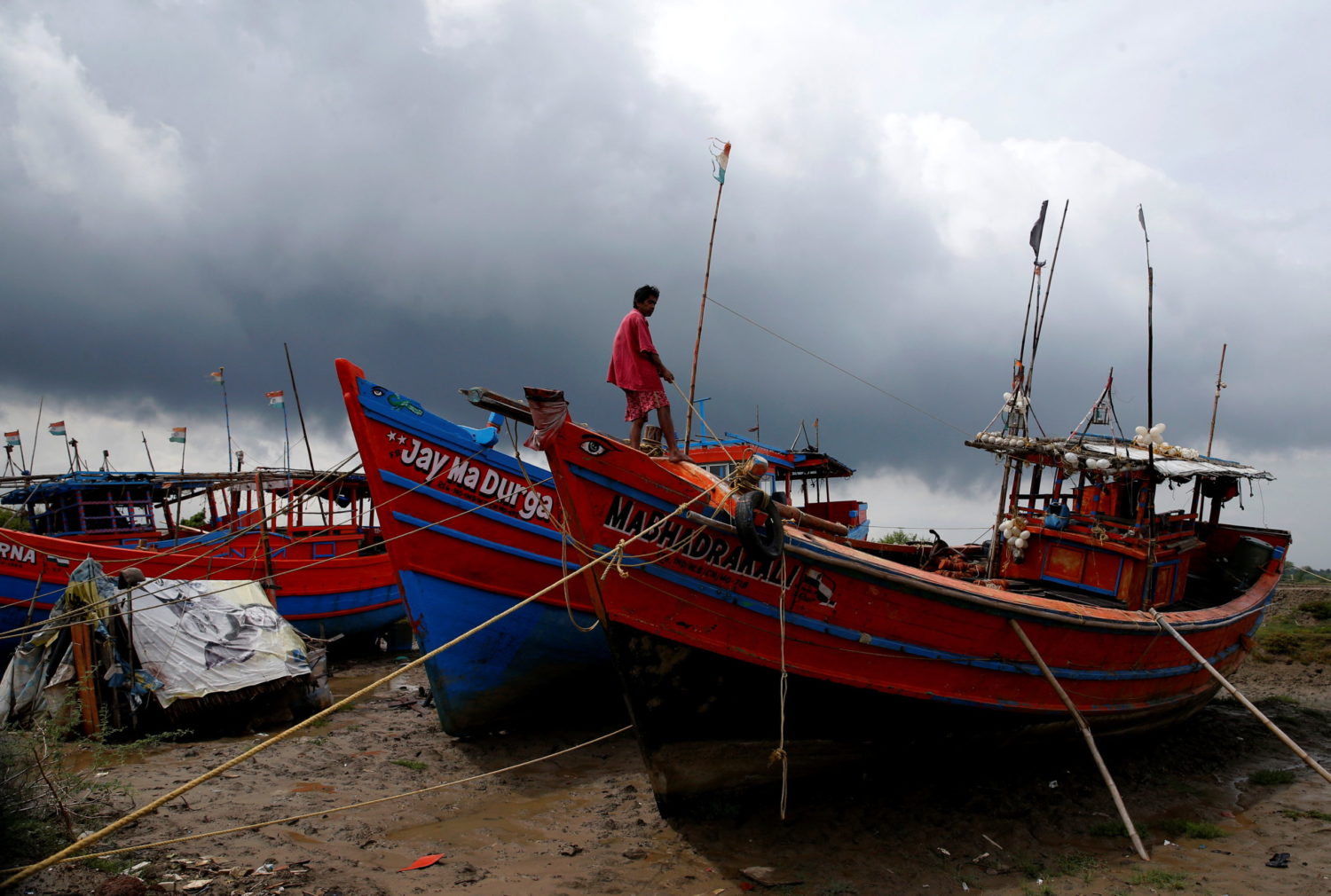 BHUBANESWAR, India (Reuters) – A tornado ripped through eastern India on Tuesday, killing at least two people and damaging dozens of homes as a powerful cyclone neared the coast, officials said, while authorities tried to move over a million people to safety from low-lying areas.

Cyclone Yaas was powering across the Bay of Bengal and would batter the eastern states of Odisha and West Bengal, and also Bangladesh, on Wednesday, the India Meteorological Department (IMD) said.

“It is likely to cause large-scale damage,” IMD chief Mrutyunjay Mohapatra told Reuters by telephone.

A freak tornado that some experts said was linked to the incoming storm snapped electricity lines, which electrocuted two people, and damaged around 45 houses in West Bengal’s Hooghly district, a government official said.

But neighboring Odisha state appeared likely to face the brunt of Cyclone Yaas – the second cyclone to hit the country in a week – where officials also began moving people in cars and boats into storm shelters and other sturdy structures.

Pregnant women and children were sent to government hospitals, as fishermen shifted boats to safety inland.

In Odisha’s Balasore district, close to where the cyclone is expected to make landfall, volunteers broadcast alerts over megaphones, urging people to move.

“Evacuation is always a challenge. In general, there is a reluctance … this time we have COVID,” said Vishal Kumar Dev, an official overseeing relief efforts in Balasore.

“Often people say, ‘We’ll go only when the rain increases.’ We’re convincing them.”

Cyclones in the Bay of Bengal are common at this time of year, and often roar ashore, causing deaths and destruction in coastal areas of both India and Bangladesh.

(Reporting by Jatindra Das in BHUBANESWAR and Subrata Nagachoudhury in KOLKATA; Writing by Devjyot Ghoshal; Editing by Robert Birsel and Howard Goller) 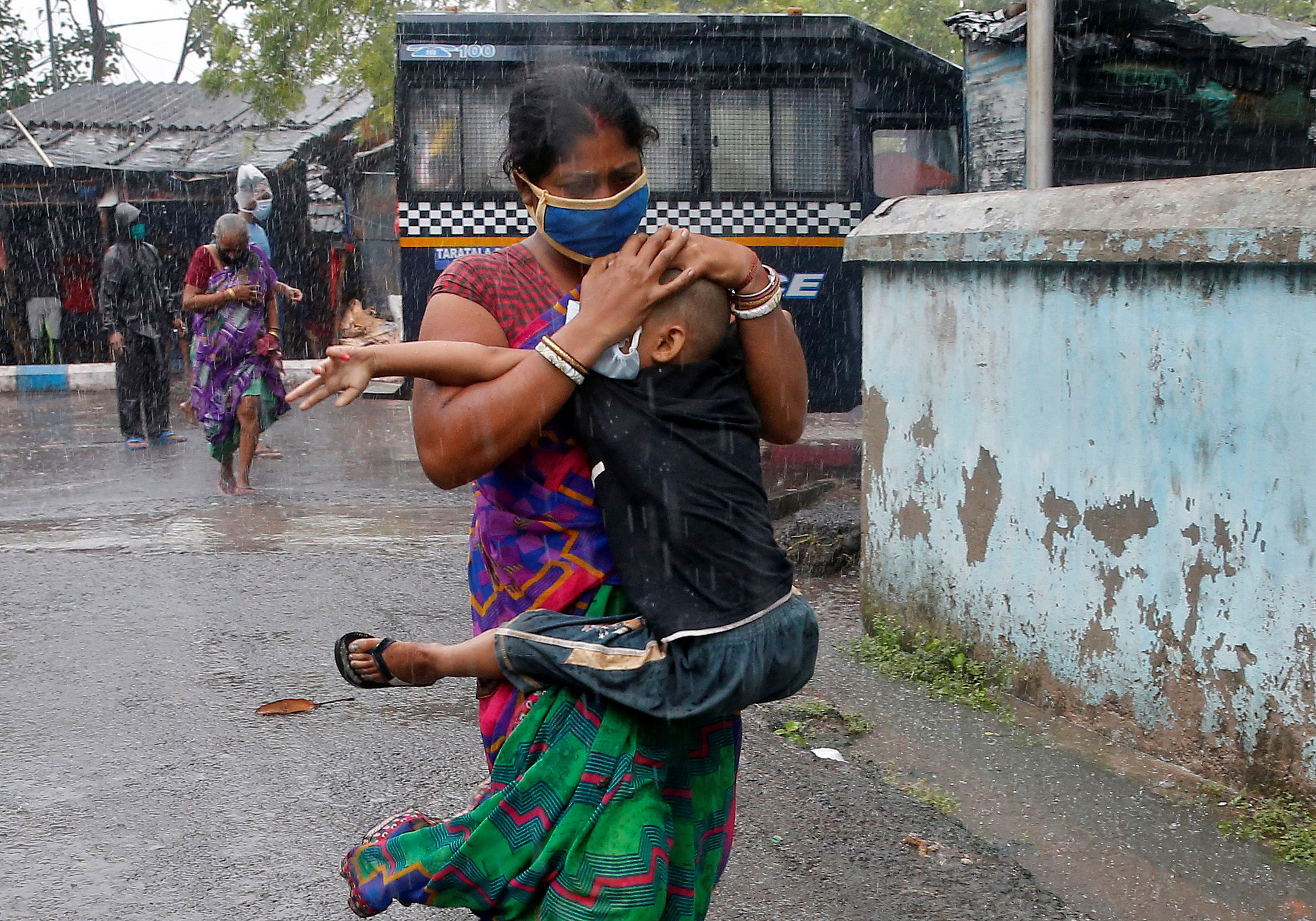 The populous Indian state of West Bengal took the brunt of Cyclone Amphan, which barrelled out of the Bay of Bengal with gusting winds of up to 185 km per hour (115 mph) and a storm surge of around five meters.

West Bengal Chief Minister Mamata Banerjee said at least 10 people had died in the state, and two districts been completely battered by one of the strongest storms to hit the region in several years.

“Area after area has been devastated. Communications are disrupted,” Banerjee said, adding that although 500,000 people had been evacuated, state authorities had not entirely anticipated the ferocity of the storm.

With rains continuing, she said the hardest hits areas were not immediately accessible. Federal authorities said they could only make a proper assessment of the destruction on Thursday morning.

“We are facing greater damage and devastation than the CoVID-19,” Banerjee said, referring to the disease caused by the novel coronavirus, which has so far killed 250 people in the state. 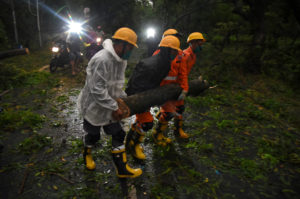 Members of National Disaster Rescue Force (NDRF) remove a branch of an uprooted tree after Cyclone Amphan made its landfall, in Digha, near the border between the eastern states of West Bengal and Odisha, India, May 20, 2020. REUTERS/Stringer NO ARCHIVES. NO RESALES.

An official in the adjoining Hooghly district said thousands of mud homes were damaged by raging winds.

In neighboring Bangladesh, at least four people were killed, officials said, with power supplies cut off in some districts.

Authorities there had shifted around 2.4 million people to more than 15,000 storm shelters this week. Bangladeshi officials also said they had moved hundreds of Rohingya refugees from Myanmar, living on a flood-prone island in the Bay of Bengal, to shelter.

But officials said they feared that standing crops could be damaged and large tracts of fertile land in the densely-populated country washed away.

“Fortunately, the harvesting of the rice crop has almost been completed. Still, it could leave a trail of destruction,” said Mizanur Rahman Khan, a senior official in the Bangladesh agriculture ministry.

Cyclones frequently batter parts of eastern India and Bangladesh between April and December, often forcing the evacuations of tens of thousands and causing widespread damage.

“We could avoid casualties as people were moved to cyclone centers earlier,” Karim said.

Embankments were also breached in West Bengal’s Sundarban delta, where weather authorities had said the surge whipped up by the cyclone could inundate up to 15 km inland.

The ecologically-fragile region straddling the Indian-Bangladesh border is best known for thick mangrove forests that are a critical tiger habitat and is home to around 4 million people in India.

Anamitra Anurag Danda, a senior fellow at the Observer Research Foundation think-tank who has extensively studied the Sundarbans, said that embankments across the area may have been breached.

“The cyclone surge coincided with the new moon high tides. It is devastation in the coastal belt,” he said. 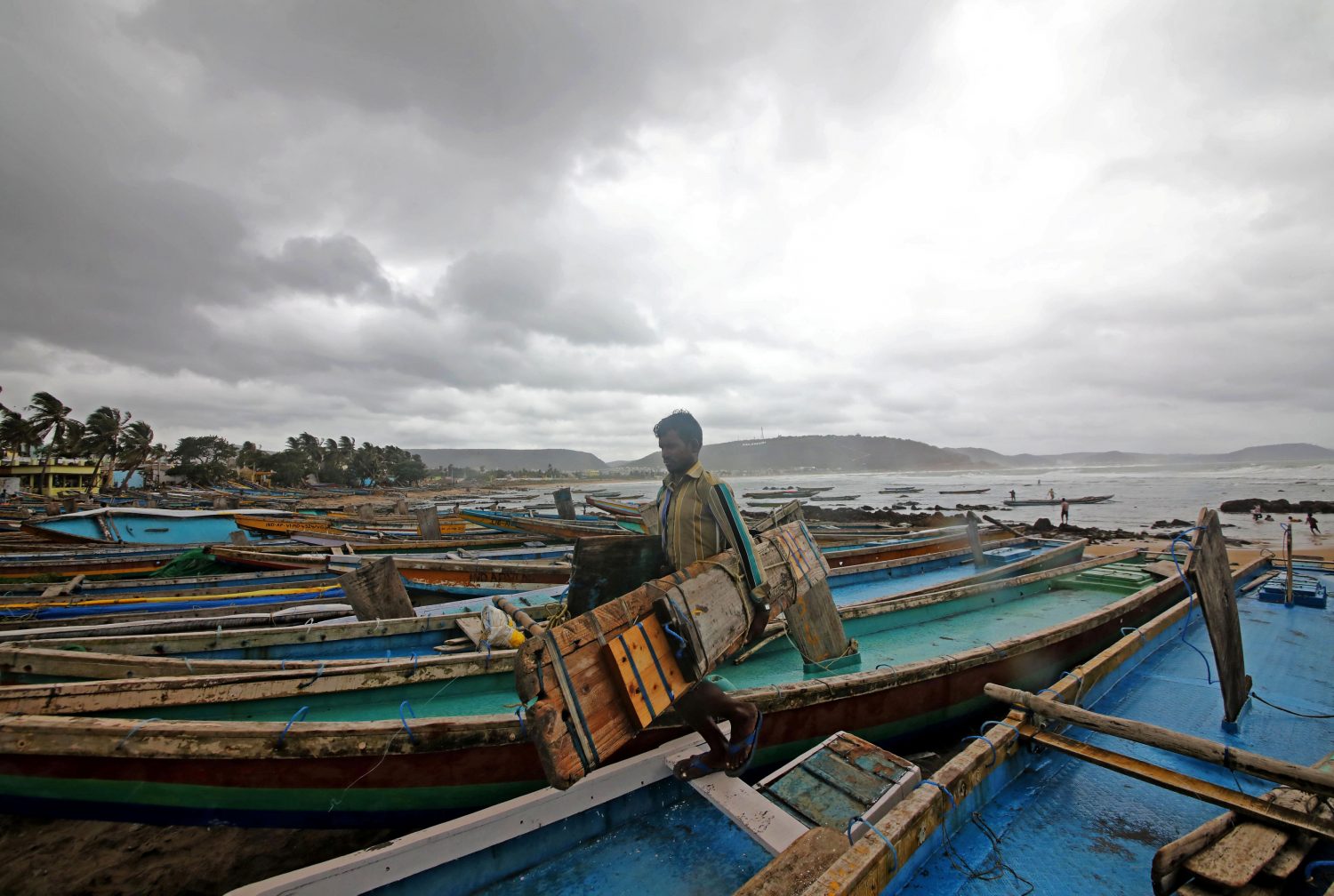 By Jatindra Dash and Mayank Bhardwaj

BHUBANESHWAR, India/NEW DELHI (Reuters) – India has evacuated more than 300,000 people along its northeast coastline by boat, bus and train ahead of a severe cyclone due to make landfall on Friday, with many villagers piling household possessions on to trucks before fleeing their homes.

Severe cyclonic storm Fani was churning up the Bay of Bengal about 320 km (198 miles) south-southwest of the Hindu temple town of Puri where special trains were put on to evacuate tourists and the beaches were empty.

In total, about 1.2 million people are expected to be evacuated from low-lying areas of 15 districts in the eastern state of Odisha to cyclone shelters, schools and other buildings, authorities said.

The cyclone will make landfall by Friday afternoon, the IMD said.

The navy has deployed seven warships and has six planes and seven helicopters on standby along with divers, rubber boats, medical teams and relief materials.

Authorities have also shut down operations at two major ports – Paradip and Visakhapatnam – and ships have been ordered to move out to avoid damage.

In Paradip, television footage showed residents piling bicycles, sewing machines and gas cylinders on to small trucks and leaving for any of nearly 900 shelters supplied with food, water and medicines.

Odisha state government has deployed hundreds of disaster management personnel, closed schools and colleges and asked doctors and other health officials not to go on leave until May 15.

India’s cyclone season can last from April to December when severe storms batter coastal cities and cause widespread deaths and damage to crops and property in both India and neighboring Bangladesh.

In 1999, a super-cyclone battered the coast of Odisha for 30 hours, killing 10,000 people. A mass evacuation of nearly a million people saved thousands of lives in 2013.

Indian Oil Corp, the country’s top refiner, said its 300,000 barrels per day (bpd) Paradip refinery in Odisha state did not need to shut down for now.

An executive at Reliance Industries Ltd, which operates an oil and gas block off the east coast, said its operations had not been affected. India’s National Aluminium Co Ltd said there was no need to halt operations.

In a Tweet, Indian airline Vistara, a joint venture of India’s Tata Sons and Singapore Airlines Ltd, said it would waive cancellation charges for flights to Odisha’s capital, Bhubaneswar, and Kolkata, the capital of West Bengal, until Sunday.

IndiGo Airlines, the country&rsquo;s largest domestic carrier, said it had canceled flights to Visakhapatnam, in the southern Indian state of Andhra Pradesh.