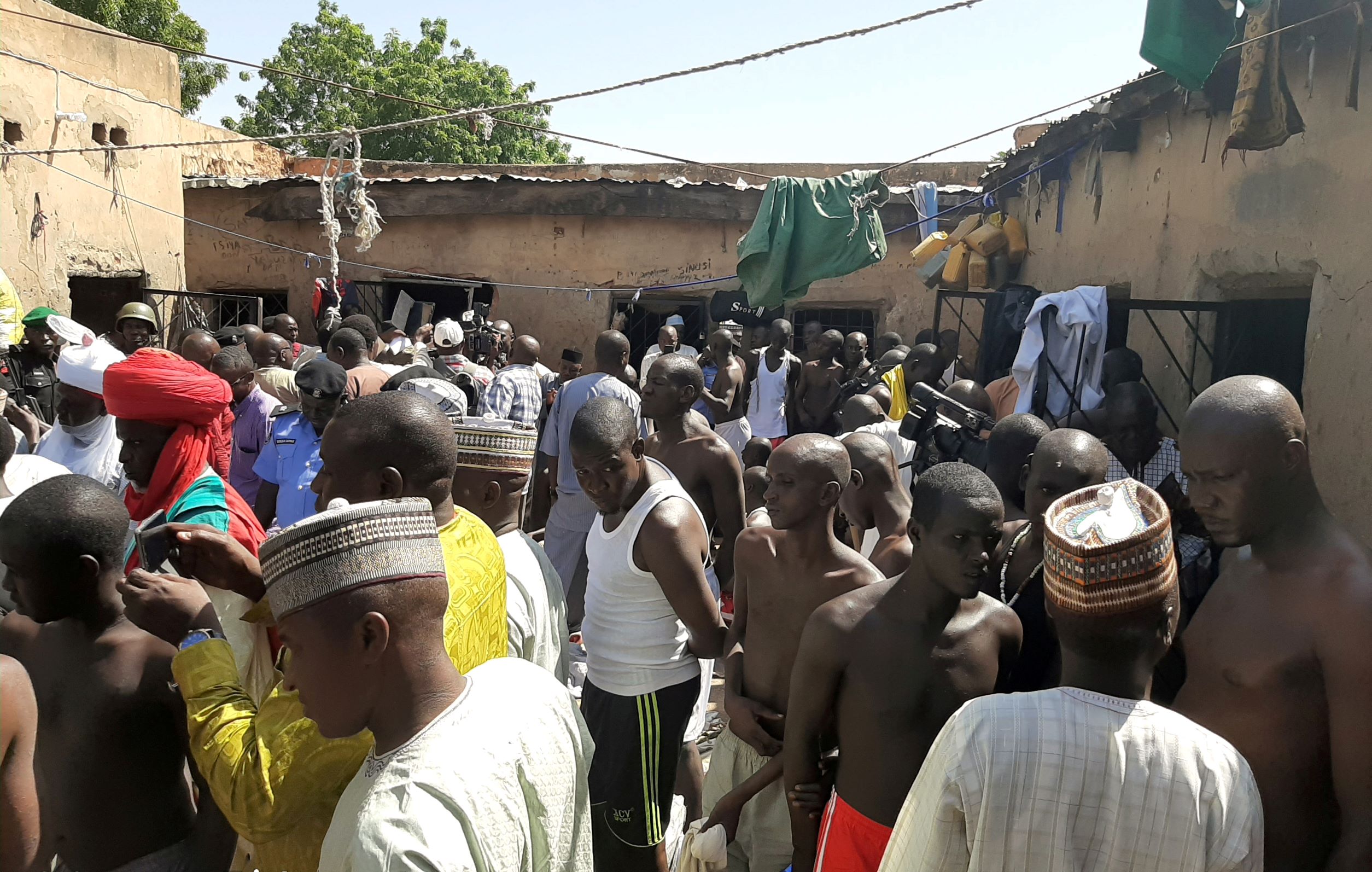 Police free hundreds of males, some chained and beaten, from Nigerian school in third raid this month
By Abdullahi Inuwa

KATSINA, Nigeria (Reuters) – Police freed about 500 men and boys from an Islamic school in northern Nigeria on Wednesday, many of whom had been chained to walls, molested and beaten, police sources said.

The raid in Katsina was the third such operation in less than a month, bringing the total of people freed from abusive conditions this month alone to about 1,000.

President Muhammadu Buhari’s government is under pressure to take urgent action to free the potentially thousands of other children who remain in similar schools across Nigeria.

Another purported Islamic school, where captives were chained to walls, some beaten so badly they needed help walking, was raided in September in neighboring Kaduna state.

Two sources at the scene told Reuters that the owner of the Mal. Niga school in Katsina metropolis and five of his staff had been arrested. Police declined to comment on the raid and blocked entrance to the grounds.

The operation, mounted by Katsina police and federal police from Abuja, freed about 500 students though not all of them had been mistreated, a police source said.

One building, which was well-kept, with clean tiles on the exterior and working plumbing, held 300 pupils who were not regularly mistreated. But about 200 captives at a site next door were regularly abused.

“The second camp is the dangerous place,” a police source said. “The children were molested there.”

At the other raided facilities, some parents thought their children would be educated and even paid tuition. Other families sent misbehaving or difficult family members and wards to them for discipline.

Buhari, whose home state is Katsina, said in June that he planned to ban Almajiris eventually but would not do so right away.

On Tuesday, an aide said Buhari had directed police: “Go out in search of these kind of centers wherever they are and disband them.”

The centers referred to the places where people are maltreated in the name of religion, the aide said. The statement did not address Almajiris at large.

(Reporting by Ahmed Kingimi in Maiduguru and Abdullahi Inuwa in Katsina, Writing by Libby George, Editing by Angus MacSwan) 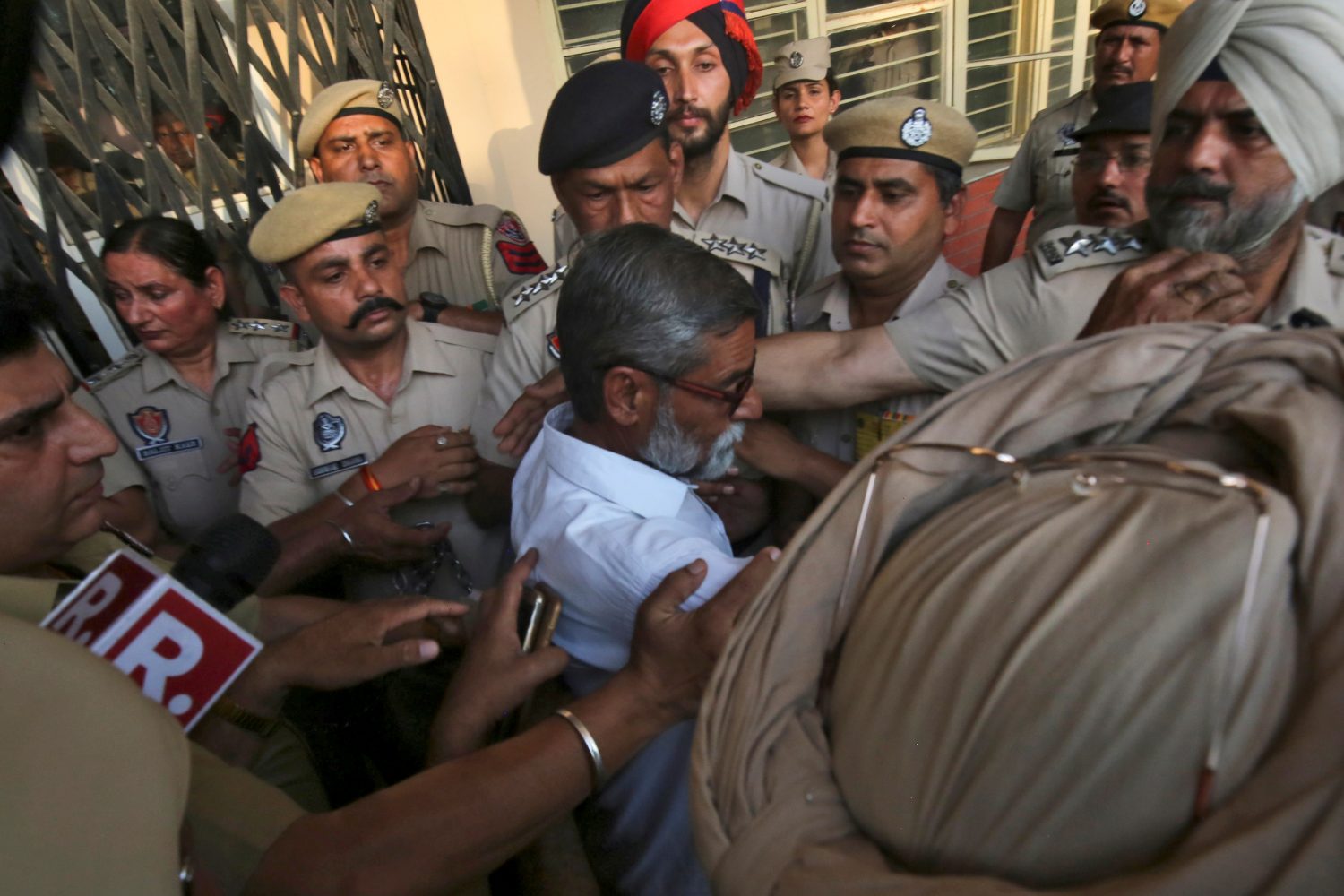 PATHANKOT, India (Reuters) – A court in north India jailed three men for life on Monday over the rape and murder of an eight-year-old Muslim girl that stirred nationwide outrage and religious rivalries.

The case illustrated India’s appalling record on violence against women and children, and drew criticism of the ruling Hindu nationalist Bharatiya Janata Party (BJP) after some members criticized police for pressing charges.

“This is a victory of truth,” said prosecution lawyer M Farooqi after the convictions.

“The girl and her family have got justice today.”

The girl, from a nomadic Muslim community that roams the forests of Kashmir, was drugged, held captive in a temple and sexually assaulted for a week before being strangled and battered to death with a stone in January 2018.

The prosecution had sought the death penalty for the three men – including a Hindu priest – who received life sentences.

The abduction, rape and killing of the child was part of a plan to remove the minority community from the area, the 15-page charge sheet said.

The case shocked India and prompted parliament to adopt the death penalty for rapists of girls younger than 12.

The trial began in Kathua in Jammu and Kashmir state more than a year ago, but India’s Supreme Court shifted it to Pathankot in neighboring Punjab state after the girl’s family and lawyer said they faced death threats.

Lawyers and Hindu politicians, including some from the ruling BJP, had also held protests against the charges.

Women and children in India have long been subjected to violence. Reported rapes climbed 60 percent to 40,000 from 2012 to 2016, government figures show, which officials attribute to more women coming forward due to greater public awareness.

However, many more cases still go unreported, especially in rural areas, because of the fear of social consequences and lack of trust in police.

Of eight people accused in the girl’s case, one man identified only as Vishal was to be freed after being found not guilty, defense lawyers said.

The last, a juvenile, awaits trial. 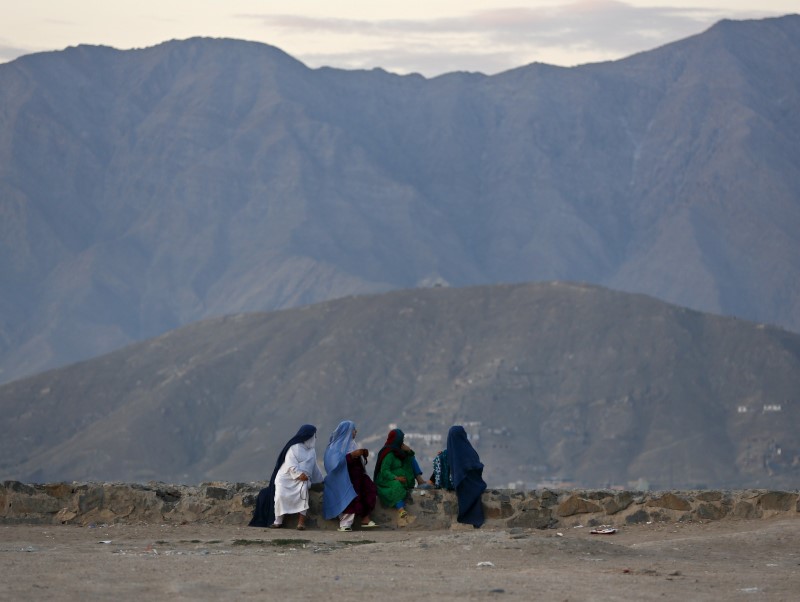 KABUL (Reuters) – A law meant to protect Afghan women from violence is being undermined by authorities who routinely refer even serious criminal cases to traditional mediation councils that fail to protect victims, the United Nations said on Tuesday.

The Elimination of Violence against Women (EVAW) law, passed in 2009, was a centerpiece of efforts to improve protection for Afghan women, who suffer widespread violence in one of the worst countries in the world to be born female.

But its effectiveness has been weakened by continued reliance on mediation by local elders to resolve violent crime.

“The wide use of mediation when a woman or girl has been beaten, mutilated or murdered, or when she has been the victim of that awful concept of ‘honor killing’, normalizes such violence and makes it much more likely to recur,” said Zeid Ra’ad Al Hussein, the U.N. High Commissioner for Human Rights.

“To use mediation for such offences is at its core a human rights violation by the State,” Al Hussein said in a statement accompanying a United Nations report, entitled “Injustice and Impunity: Mediation of Criminal Offences against Women”.

In many remote parts of Afghanistan, where the formal legal system has no sway, mediation is the only form of justice, but the U.N. report focused on cases reported to the authorities.

No comment was immediately available from the office of Afghanistan’s attorney general.

Improving the situation of women in Afghanistan has been a priority for Western donors, who have pumped billions of dollars into the country.

But more than 17 years after the overthrow of the Taliban, the report underlines the still-dire situation facing many women in Afghanistan, which ranks near the bottom of the United Nations Development Programme’s Gender Inequality Index.

Tuesday’s report was based on 237 cases of violence against women and 280 cases of murder in 2016 and 2017, including murders within families sometimes called “honor killings”.

It found such crimes appeared to enjoy “de facto immunity”, fostered by a reliance on mediation, with just 18 percent of cases ending in conviction and a prison sentence.

“The resolution of such cases by mediation must never occur; and cases should be prosecuted under the applicable general murder articles in order to end impunity,” it said.

The report highlighted problems successive Afghan governments have had in building a functioning judicial system in a country that has traditionally relied heavily on religious leaders or elders to settle disputes.

It said many women faced pressure from family members and even some legal groups set up under the EVAW law to withdraw complaints or accept mediation. Victims’ rights were not a priority, and were even disregarded outright.

The American Center for Law and Justice (ACLJ) has revealed that Pastor Saeed Abedini has been viciously beaten by other inmates at the brutal prison where he is being illegally detained.

“Unprovoked, fellow prisoners attacked Pastor Saeed as he attempted to leave his cell, punching him in the face near his left eye and nose,” Executive Director Jordan Sekulow wrote. “In addition to physically beating the persecuted pastor, prisoners demolished a small table Pastor Saeed used to study and read.”

“As he was attacked, Pastor Saeed called out for help,” he continued. “Iranian prison guards did intervene and prevent further injury. However, Pastor Saeed suffered injuries to his face—his eyes beaten black and blue. He was able to be seen briefly by a prison doctor, and thankfully he did not receive any broken bones.”

Abedini has been illegally detained by Iranian officials since 2012.

“It is heartbreaking to me and my family that Saeed was again beaten in prison. Saeed’s life is continuously threatened not only because he is an American, but also because he is a convert from Islam to Christianity. It’s time to get Saeed home before it is too late,” Naghmeh Abedini said in response to the news.

This is not the first assault at the hands of other inmates and Naghmeh Abedini has stated she fears his health will continue to decline with each successive beating.

Iranian officials have reportedly told Saeed his sentence will be extended if he does not deny Christ.

A pastor in South Sudan says that he has had his strength increased after an ordeal where he was jailed and beaten by Islamists.

Adam Haron, 37, a convert from Islam who was born in West Darfur, Sudan.  On November 9th and 10th, Islamic extremists began calling and harassing him about his evangelism work in South Sudan.

Evangelism is legal in the nation where Christians are in the majority.  The country withdrew from Sudan in 2011 partially because of religious freedom issues.

Six days later, six armed men in military uniforms came into his hotel room and seized his items.  They forced him into a car where they began to beat him.  He was held at gunpoint and questioned about being a pastor.  When he said he was a pastor of Jesus Christ, he was taken to a detention center.

Pastor Haron was then kept in jail through February 18th.

Haron said that he was beaten 364 times with a tree branch as a whip.  He was thrown into a narrow cell with his legs bound in chains.  He had over $820 dollars stolen from him by his captors.

Haron says he will return to his church made up of mostly converts from Islam.