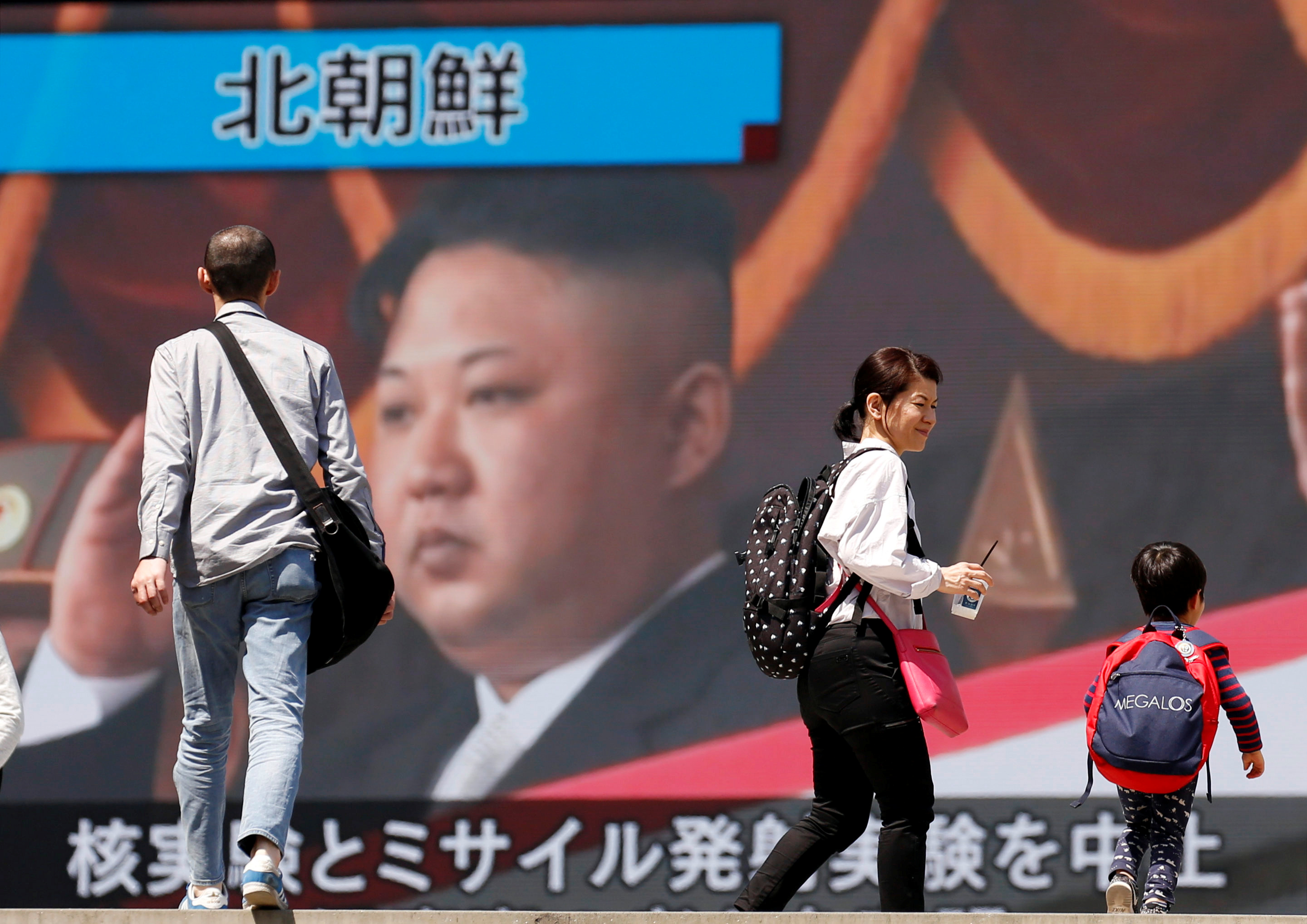 SEOUL (Reuters) – South Korea halted the propaganda broadcasts it blares across the border with North Korea on Monday, aiming to set a positive tone ahead of the first summit in a decade between their leaders as the U.S. president cautioned the nuclear crisis was far from resolved.

The gesture came after North Korea said on Saturday it would immediately suspend nuclear and missile tests, scrap its nuclear test site and instead pursue economic growth and peace, a declaration welcomed be world leaders.

North Korean leader Kim Jong Un is due to hold a summit with South Korean President Moon Jae-In at the border truce village of Panmunjom on Friday, and is expected to meet with President Donald Trump in late May or early June.

“North Korea’s decision to freeze its nuclear program is a significant decision for the complete denuclearization of the Korean peninsula,” South Korean President Moon Jae-in said in a regular meeting at the Blue House on Monday.

“It is a green light that raises the chances of positive outcomes at the North’s summits with South Korea and the United States. If North Korea goes the path of complete denuclearization starting from this, then a bright future for North Korea can be guaranteed.”

South Korea’s propaganda broadcasts, which include a mix of news, Korean pop songs, an criticism of the North Korean regime, were stopped at midnight, the defense ministry in Seoul said. It didn’t specify if they would resume after the Kim-Moon summit.

“We hope this decision will lead both Koreas to stop mutual criticism and propaganda against each other and also contribute in creating peace and a new beginning,” the South Korean defense ministry said.

It marks the first time in more than two years that the South’s broadcasts have fallen silent. North Korea has its own propaganda loudspeakers at the border, but a defense ministry official said he could not verify that they had also stopped.

The two Koreas agreed to a schedule for Friday’s summit in working-level talks on Monday, South Korea’s presidential Blue House said, adding North Korea had agreed to allow South Korean reporters in its part of the Joint Security Area at the border to cover the event.

Preparations for the talks will include a rehearsal by officials from both countries at the border truce village of Panmunjom on Wednesday, the Blue House said.

The inter-Korean talks and the expected Kim-Trump summit have raised hopes of an easing in tensions that reached a crescendo last year amid a flurry of North Korean missile tests and its largest nuclear test.

Trump initially welcomed Pyongyang’s statement it would halt nuclear and missile tests, but he sounded more cautious on Sunday.

“We are a long way from conclusion on North Korea, maybe things will work out, and maybe they won’t – only time will tell,” Trump said on Twitter.

Shares of Good People and Shinwon Corp, which used to operate factories in North Korea’s Kaesong industrial region near the border, rose 8 percent and 15 percent, respectively.

“We cannot let any noise damage the continued improvements in the situation on the peninsula and cannot allow anything to interfere in or obstruct the talks process between the parties,” Wang said, after talks with Russian Foreign Minister Sergei Lavrov in Beijing.

Editorials in Chinese state-run media were tempered with notes of caution.

The China Daily, the official English-languages newspaper of the Chinese government, said the pledges conveyed the message that Kim will sit down for talks as the leader of a legitimate nuclear power.

“Negotiations about actual nuclear disarmament will likely prove arduous given such weapons are critical to Pyongyang’s sense of security. It will require ironclad security guarantees if it is to relinquish them.”

The Global Times, a hawkish tabloid newspaper run by the ruling Communist Party’s official People’s Daily, said all parties “should cherish this hard-won state of affairs” and continue to make efforts toward peace and denuclearization.

“Washington should not regard North Korea’s halt to nuclear and missile tests as a result of its maximum pressure,” the Global Times wrote.

“It must be attributed to multiple factors, one of which is that Pyongyang has mastered certain advanced nuclear technologies and successfully launched an intercontinental ballistic missile with a range of more than 10,000 km.”

The United States, through the United Nations, has pursued a series of ever-tightening sanctions on North Korea aimed at cutting its access to foreign currency.

Customs data on Monday showed China’s imports from North Korea fell sharply in the first three months of the year, and exports also dropped, compared with a year earlier.