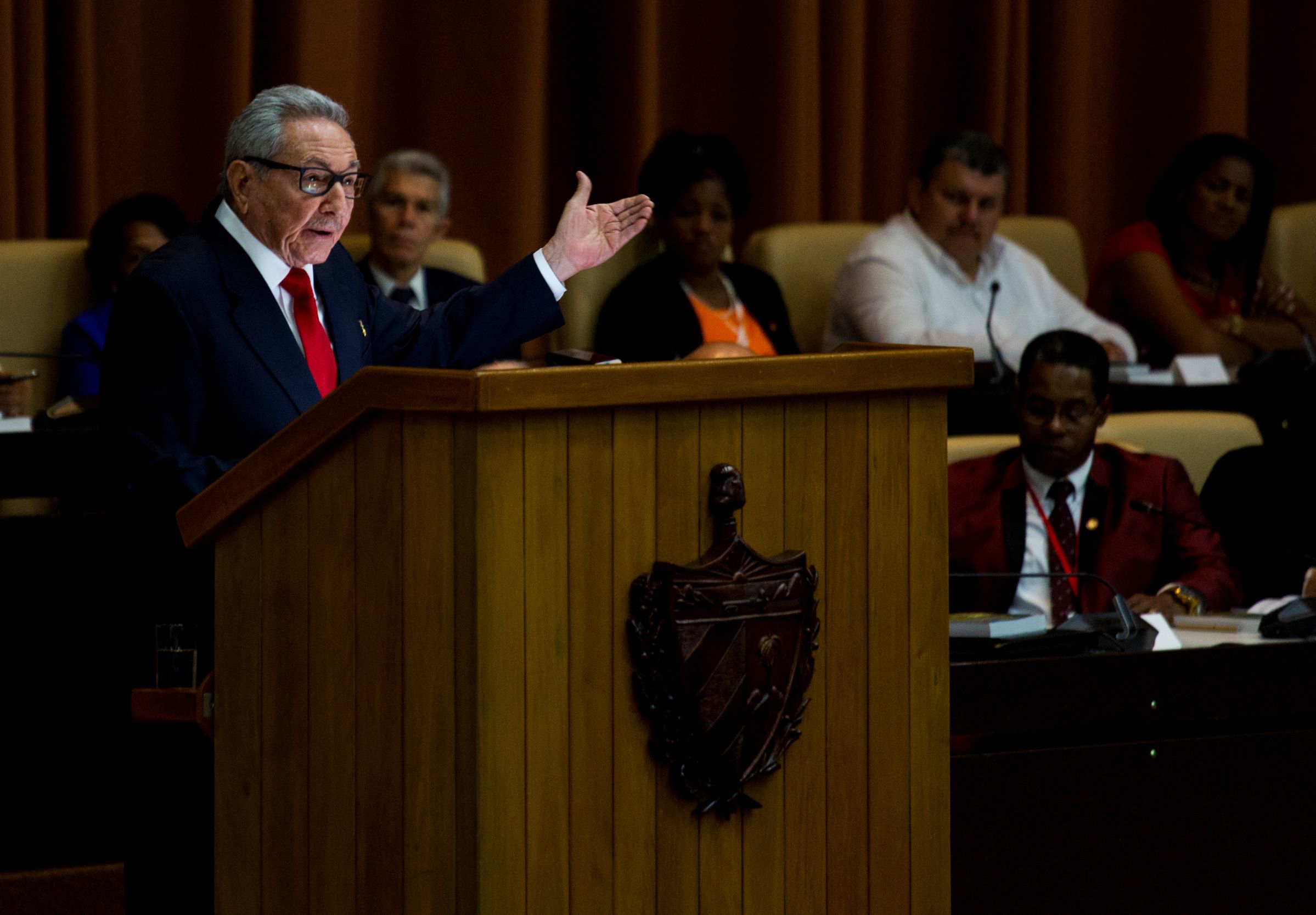 Taking a direct but largely symbolic swipe at Cuba’s leadership as part of U.S. President Donald Trump’s continuing pressure campaign against Havana, the State Department banned travel to the United States by Castro, Cuba’s former president and younger brother of the late Fidel Castro, as well as family members.

“Castro is responsible for Cuba’s actions to prop up the former Maduro regime in Venezuela through violence, intimidation, and repression,” Secretary of State Mike Pompeo said in a statement.

The measures that Pompeo said would block their entry to the United States are likely to have limited impact. Castro last visited in 2015 to address the United Nations General Assembly. His children are also believed to have rarely traveled to the United States. Mariela Castro Espin, a gay rights activist, made stops in New York and San Francisco in 2012.

The Cuban government, which strongly rejects such accusations, did not immediately respond to a request for comment.

It was the latest in a series of punitive measures that Trump has taken against Washington’s old Cold War foe since taking office in 2017, steadily rolling back the historic opening to Havana under his Democratic predecessor, Barack Obama.

Trump has focused especially on Cuba’s support for Maduro, a longtime ally of Havana. Earlier this year, the United States and dozens of other countries recognized opposition leader Juan Guaido as Venezuela’s rightful president, though Maduro retains the backing of Russia and China as well as the OPEC nation’s military.

“In concert with Maduro’s military and intelligence officers, members of the Cuban security forces have been involved in gross human rights violations and abuses in Venezuela, including torture,” Pompeo said. Cuba has strongly denied the U.S. accusations.

Speaking in New York while attending the U.N. General Assembly, Venezuelan Foreign Minister Jorge Arreaza scoffed at the U.S. measure against Castro, saying it was an attempt to humiliate him.

“And neither Raul Castro nor his family even want to come to this country! We are forced to come here because the U.N. headquarters is in New York, for now,” said Arreaza, referring to a similar U.S. travel bar on Venezuelan officials and citing a Russian offer to host the United Nations in Sochi.

Last week, the Trump administration ordered the expulsion of two members of Cuba’s delegation to the United Nations.

Washington has made clear that a key objective of its tough approach to Cuba is to force it to abandon Maduro, something Havana has said it will never do. However, Trump has stopped short of breaking off diplomatic relations with Cuba restored by Obama in 2015 after more than five decades of hostility.

Maduro has accused Guaido – who earlier this year assumed an interim presidency after alleging that Maduro had rigged the last election – of trying to mount a U.S.-directed coup.

(Reporting by Matt Spetalnick; Additional reporting by Lisa Lambert in Washington, Sarah Marsh and Marc Frank in Havana; and Andrew Cawthorne in Caracas; Editing by Bill Berkrot and Lisa Shumaker) 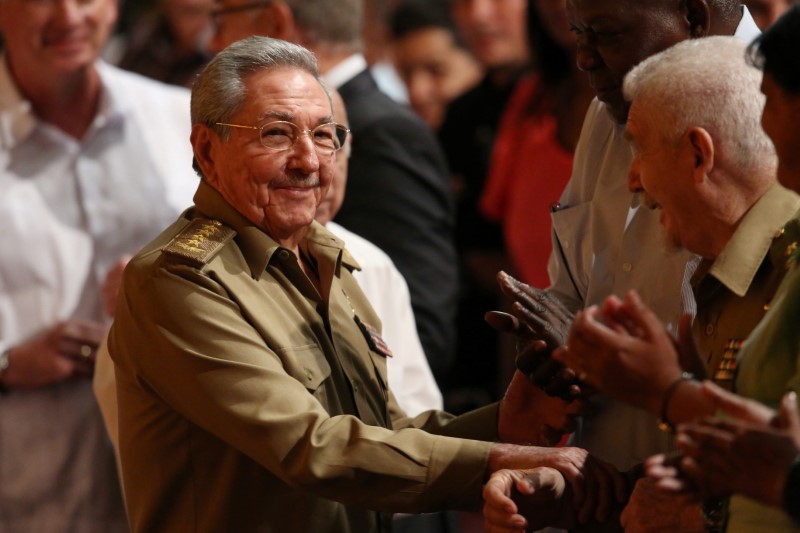 HAVANA (Reuters) – Cuban President Raul Castro met with North Korean Foreign Minister Ri Yong Ho on Friday amid hopes the Communist-run island might be able to convince its Asian ally to avert a showdown with the United States.

North Korea is facing unprecedented pressure from the United States and the international community to cease its nuclear weapons and missile programs. Cuba has maintained close diplomatic ties with North Korea since 1960 but is opposed to nuclear weapons.

“In the brotherly encounter, both sides commented on the historic friendship between the two nations and talked about international topics of mutual interest,” Cuban state television said on its midday broadcast.

Canadian Prime Minister Justin Trudeau said on Thursday he had discussed with Castro last year the possibility of working together to defuse global tensions with North Korea.

“Can we pass along messages through surprising conduits?” Trudeau asked in a Q&A session after a speech.

“It was a topic of conversation when I met President Raul Castro last year. These are the kinds of things where Canada can, I think, play a role that the United States has chosen not to play, this past year.”

Canada had an interest in seeking solutions, not just because of regional security but also because the flight path of possible North Korean missiles would pass over its territory, Trudeau said.

North Korea is working on developing nuclear-tipped missiles capable of hitting the U.S. mainland, aiming to achieve what Ri has called “a real balance of power with the United States”.

Ri met his Cuban counterpart Bruno Rodriguez this week and the ministers denounced U.S. “unilateral and arbitrary lists and designations” that led to “coercive measures contrary to international law”, according to Cuba’s foreign ministry.

The ministers called for “respect for peoples’ sovereignty” and the “peaceful settlement of disputes”, according to a ministry statement.

President Donald Trump has increased pressure on Cuba since taking office, rolling back a detente begun by his predecessor Barack Obama and returning to the hostile rhetoric of the Cold War.

North Korea and Cuba are the last countries in the world to maintain Soviet-style command economies, though under Raul Castro, the Caribbean nation has taken small steps toward the more market-oriented communism of China and Vietnam.

Raul took over the presidency in 2008 from his older brother and revolutionary leader Fidel Castro, who died on Nov. 25 last year. Cuba is marking the anniversary on Saturday with vigils and concerts. [L8N1NS6SF]

Cuba maintains an embassy in North Korea but trades mostly with South Korea. Last year, trade with the latter was $67 million and just $9 million with the North, the government said.

(Reporting by Sarah Marsh in Havana; Additional Reporting by Nelson Acosta in Havana, Julie Gordon in Vancouver and David Ljunggren in Ottawa; Editing by Daniel Flynn and James Dalgleish)

Cuban President Raul Castro says he has returned to the Catholic Faith after a meeting with Pope Francis.

“I will resume praying and turn to the Church again if the Pope continues in this vein,” Castro said after a 50-minute private audience with Francis at the Vatican on Sunday.

“As I’ve already told my council of advisers, I read all of the Pope’s speeches,” he added, according to CNN. “I promise that I will go to all of his Masses — and with satisfaction. I left the meeting this morning impressed, very impressed by his knowledge, his wisdom, modesty, and by all the virtues that we know he has.”

Catholic activity in Cuba was suppressed by the government after the revolution and several media outlets like the BBC say that they cannot say for sure that Castro is being completely serious with his comment.

“The fact that the man who helped lead the Cuban Revolution would even joke about returning to the Catholic Church shows just how far the relationship between Havana and the Vatican has moved forward recently,” offered BBC correspondent Will Grant from Havana.

Pope Francis has been very critical of the world’s economic systems.

“Jesus affirms that you cannot serve two masters, God and wealth,” Francis said in an interview back in January about the Vatican report titled “This Economy Kills.”

“Is it pauperism? No, it is the Gospel.  Jesus tells us that it is the ‘protocol’ on the basis of which we will be judged, it is what we read in Chapter 25 of Matthew: I had hunger, I had thirst, I was in prison, I was sick, I was naked and you helped me: dressed me, visited me, you took care of me,” Francis argued.

“This attention to the poor is in the Gospel, and in the tradition of the church, it is not an invention of Communism and [we] need not ideologize it, like sometimes happened in the course of history.”

Former Cuban president Fidel Castro is blaming the United States and Israel for the creation of the Islamic terrorist group ISIS.

Castro says that Israel’s intelligence agency teamed up with U.S. Senator John McCain to create the terrorist entity.  Castro made the claim in an article he penned for the Cuban state media and translated by Russia Today.

“Many people are astonished when they hear the statements made by some European spokesmen for NATO when they speak with the style and face of the Nazi SS,” Castro wrote.  “Adolf Hitler’s greed-based empire went down in history with no more glory than the encouragement provided to NATO’s aggressive and bourgeois governments, which makes them the laughing stock of Europe and the world.”

The 88-year-old Castro has officially been out of power since his resignation but many western diplomats say that he is still consulted on any major decision for the country.  His views on America and Israel likely will continue to be the stance of the nation until his death.