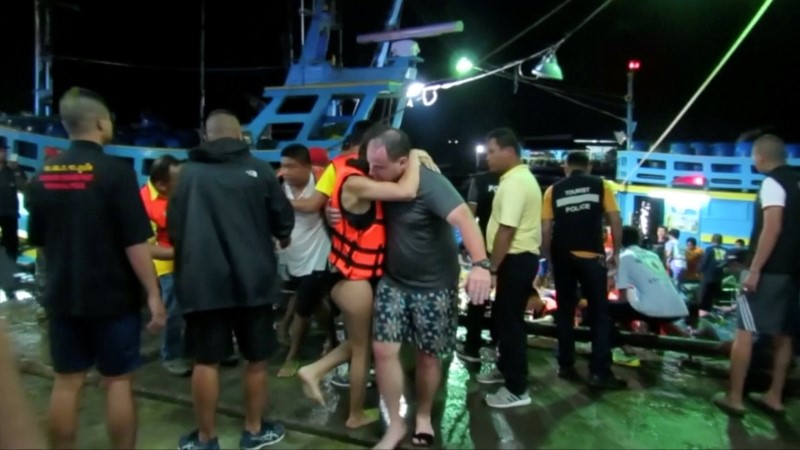 BANGKOK (Reuters) – Thai rescuers deployed helicopters on Friday in a search for 29 people missing after the sinking of a boat carrying Chinese tourists, with one official saying he feared “no chance” of any more survivors, which would mean a death toll of nearly 60.

The confirmed death toll from the accident off the resort island of Phuket stood at 27, but the navy said divers had spotted “quite a few bodies” in the sunken vessel, the Phoenix.

The boat capsized in rough seas on Thursday with 105 people on board, 93 of them Chinese tourists along with 12 Thai crew and tour guides. 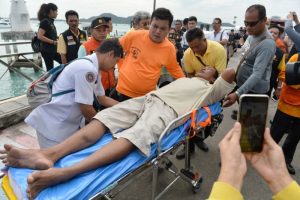 A rescued tourist is attended by rescue personnel after a boat he was travelling in capsized off the tourist island of Phuket, Thailand, July 6, 2018. REUTERS/Sooppharoek Teepapan

Television broadcast images of dozens of divers searching for the missing, while more rescuers waited on standby at a pier nearby. Seas were calm and skies clear on Friday.

“Right now, officials from the marine police and navy are helping to dive at the spot where the boat sank,” Marine Police said in a statement.

A Marine Department official said there was probably “no chance” any more survivors could be found from inside the boat.

“A day and a night has passed,” said the department’s deputy director-general, Kritpetch Chaichuay.

Thailand is in the middle of its rainy season, which usually runs from May to October, and often generates high winds and flash storms in coastal areas, especially on its west coast on the Indian Ocean, where Phuket is located.

Police are investigating the incident. The boat, which went down about 7 km (5 miles) from shore, was properly registered and had not been overloaded, police said.

“Be careful … nature is not a joke,” Surachate wrote.

“The Tourist Police warned businesses in Phuket already to not take boats out from shore, but they violated this order by taking foreign tourists out,” he said.

Media identified the operator of the boat as TC Blue Dream. Reuters could not find a contact number for that name. 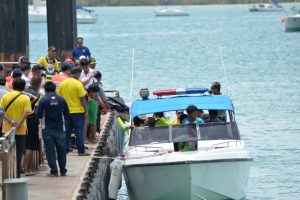 Thai Rescue workers carry the body of a victim on a stretcher, after a boat capsized off the tourist island of Phuket, Thailand, July 6, 2018. REUTERS/Sooppharoek Teepapan

Thailand has a poor record on road and boat safety. Many tour operators have complained about lax enforcement of basic safety measures, such as seatbelts in cars and lifejackets on boats.

Another boat sailing in the same area also capsized on Thursday but all 35 tourists, five crew and a guide on board were rescued, the Water Safety Department of the Harbour Department said.

The Chinese embassy in Bangkok said it had asked the Thai government to make all-out rescue efforts, and had sent a team to Phuket to help.

Chinese consulate staff in southern Thailand were on the scene helping its citizens, it said.

Chinese tourists make up the biggest number of foreign visitors to Thailand, their numbers surging in recent years, drawn by the growing popularity of the southeast Asian nation’s islands.

“China expresses gratitude for the active search and rescue efforts made by Thailand,” the spokesman, Lu Kang, told a regular briefing.