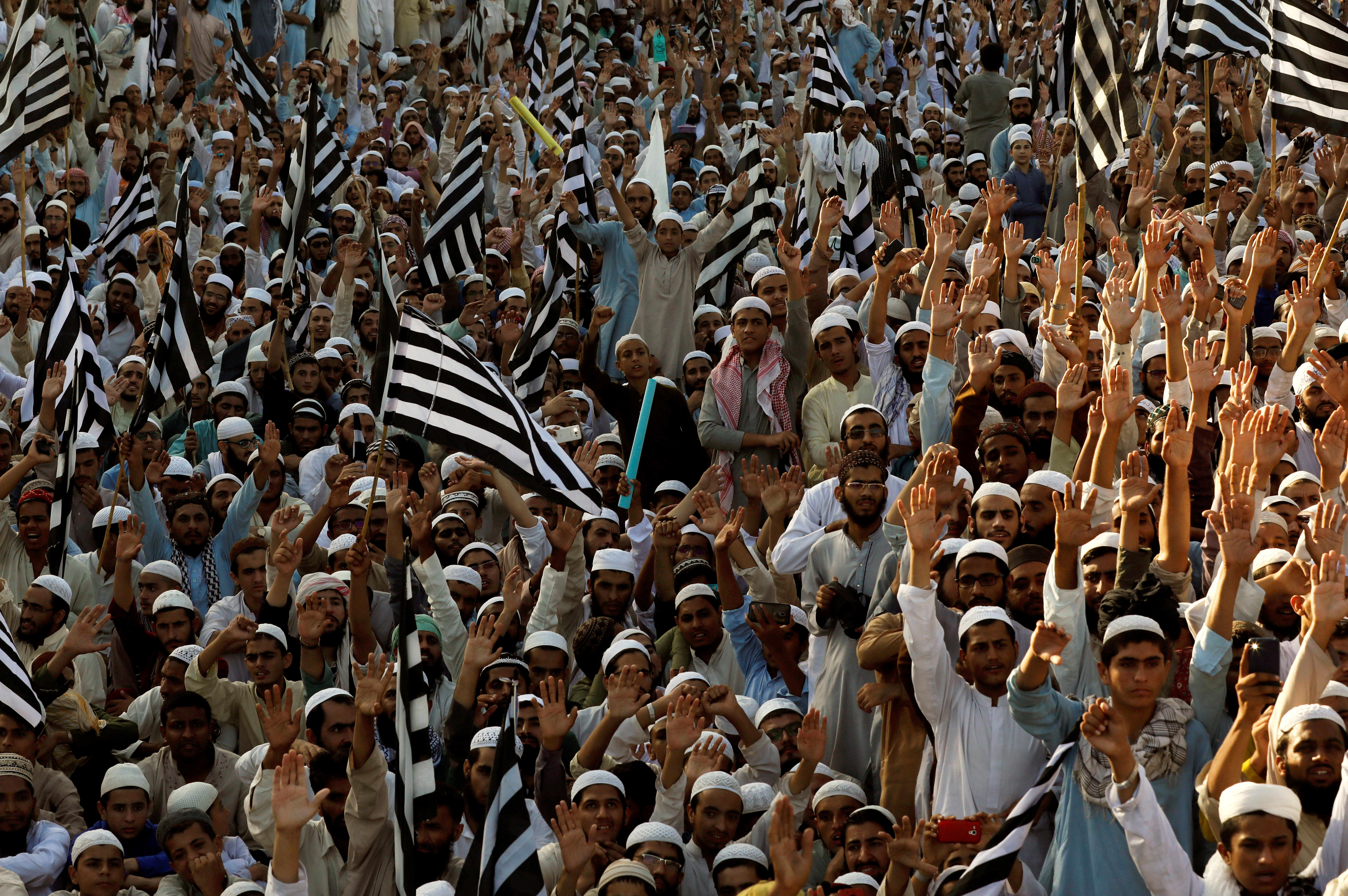 ISLAMABAD/LAHORE, Pakistan (Reuters) – A Pakistani Christian woman has been freed from prison a week after the Supreme Court overturned her conviction and death sentence for blasphemy against Islam, and she is at a secure location in the country, officials said on Thursday.

Officials dismissed some media reports that the woman, Asia Bibi, had been flown abroad, which would enrage hardline Islamists who have been protesting against her release and calling for her to be banned from leaving.

The release overnight of the mother of five prompted immediate anger from an Islamist party that has threatened to paralyze the country with street protests if her acquittal is not reversed.

She always denied having committed blasphemy.

The case has outraged Christians worldwide, and Pope Francis met Bibi’s family this year, saying he prayed for her. Italy said on Tuesday it would try to help Bibi, who is Catholic, to leave Pakistan.

Pakistan’s foreign ministry denied reports that Bibi had left the country and pointed out that a review of the Supreme Court decision to free her was pending.

“Her writ is in court, when that is decided, Asia Bibi can go anywhere she wants to, she is a free national … if she wants to go abroad, no harm in it.”

In Rome, the Catholic aid agency Aid to the Church in Need (ACN) said Bibi has been able to see her husband in an undisclosed location.

Their daughters were “close by” but had not yet seen their mother as of early afternoon, Pakistan time.

The agency, which arranged a meeting for Bibi’s husband and daughter with Pope Francis at the Vatican this year, said the family was awaiting visas but declined to disclose from which country for security reasons.

Insulting Islam’s Prophet Mohammad carries a mandatory death penalty in Pakistan, which is about 95 percent Muslim and has among the harshest blasphemy laws in the world.

No executions for blasphemy have been carried out in Pakistan but enraged mobs sometimes kill people accused of blasphemy.

Rights groups say the blasphemy law is exploited by hardliners as well as ordinary Pakistanis to settle personal scores.

Christians make up about 2 percent of the population.

Security officials told Reuters early on Thursday that Bibi had been released from a prison in Multan, a city in the south of Punjab province.

She was flown to Islamabad and was in protective custody because of threats to her life, said three officials, speaking on condition of anonymity.

Bibi’s lawyer, who has fled Pakistan and this week sought asylum in the Netherlands, confirmed she was no longer in prison.

“All I can tell you is that she has been released,” lawyer Saif-ul-Mulook told Reuters by phone from the Netherlands, where the government said on Thursday it had offered him temporary asylum.

A spokesman for the hard-line Tehreek-e-Labaik (TLP) party, which took to the streets after the Supreme Court ruling, said her release violated a deal with the government of Prime Minister Imran Khan to end the protests.

“The TLP activists are agitated as the government has breached the agreement with our party. The rulers have showed their dishonesty,” party spokesman Ejaz Ashrafi told Reuters.

Under the deal, the government said it would not block a petition to the Supreme Court to review Bibi’s acquittal in light of sharia, Islamic religious law, the TLP said.

It also said the government promised to work to ensure Bibi could not leave the country.

If the government allows Bibi to leave, it would likely face more paralyzing protests from the TLP and other Islamist parties.

OTTAWA (Reuters) – Canada urged Pakistan on Tuesday to ensure the well-being of a Pakistani Christian woman whose life is in danger after having been acquitted in the South Asian country last month of blasphemy charges against Islam, a ruling that sparked mass protests.

The case of Asia Bibi, who spent eight years on death row in Pakistan before being released, has outraged Christians worldwide. Bibi’s husband, Ashiq Masih, has appealed for help to Britain, Canada, Italy and the United States, and so far, Italy has said it would assist her.

Bibi was convicted of blasphemy in 2010 after neighbors said she made derogatory remarks about Islam when they objected to her drinking water from their glass because she was not Muslim. She is a Protestant and denies committing blasphemy.

“Canada calls on Pakistan to take all measures necessary to ensure the safety and security of Asia Bibi and her family,” Freeland said. “Canada is prepared to do everything we can” and is “extremely engaged in this issue,” Freeland said.

Islamists shut down roads in major cities in Pakistan during three days of demonstrations against Bibi’s acquittal. They have threatened to escalate the protests if she is permitted to leave the country. The government has indicated it will bar her from traveling abroad.

Bibi’s lawyer, Saiful Mulook, fled to the Netherlands earlier this week because of fears for the safety of his family. 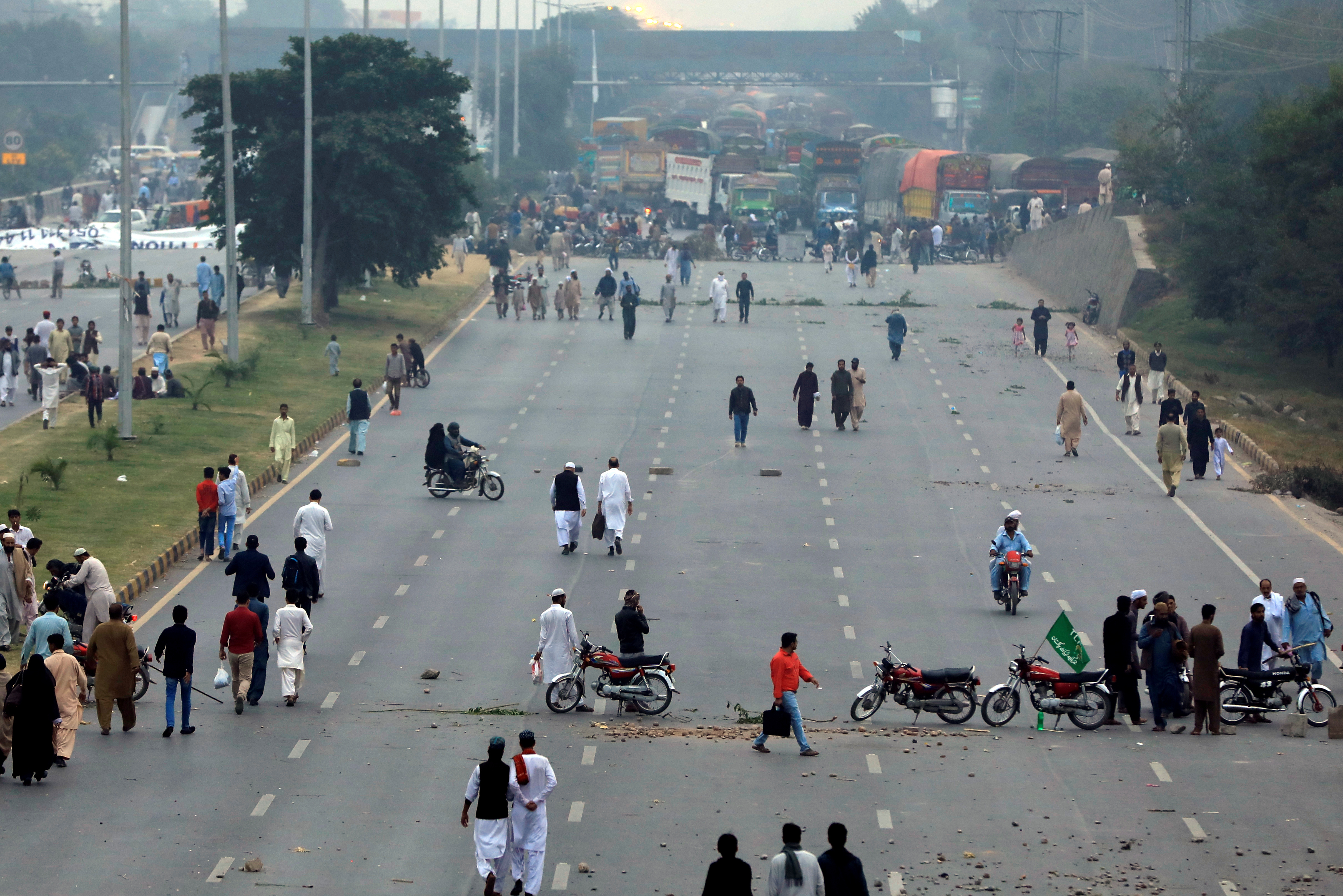 By Mubasher Bukhari and Saad Sayeed

LAHORE/ISLAMABAD (Reuters) – Pakistan suspended mobile phone networks in major cities on Friday and many schools were closed as Islamist groups protested for a third day against the acquittal of a Christian woman facing the death penalty for blasphemy.

The Supreme Court on Wednesday overturned the conviction of Asia Bibi, a mother of five, and ordered her freed. She had been living on death row since 2010 after being convicted under Pakistan’s tough blasphemy laws.

The case outraged Christians worldwide and has been a source of division within Pakistan, where two politicians who sought to help Bibi were assassinated.

The Supreme Court decision enraged hardline Islamists, in particular, members of a group called the Tehreek-e-Labaik (TLP), who have taken to the streets to call for the death of the judges who made the decision and the ouster of the government.

Authorities, including members of the main military security agency, held negotiations with the leader of the group late on Thursday but they came to no agreement, the TLP leader, Khadim Hussain Rizvi, said.

The spokesman for the military said the armed forces hoped the “matter is resolved without the disruption of peace”.

“Both sides should talk amongst themselves, and we should not reach the stage where this matter comes under the ambit of the armed forces,” he told state-run PTV channel.

On Friday, telephone networks were down in the capital, Islamabad, and the eastern city of Lahore, where pockets of TLP protesters blocked main roads.

“All services have been shut down by the government,” said a customer service representative at one of Pakistan’s main mobile phone companies, while declining to elaborate.

Authorities in Pakistan often shut down mobile phone networks in the hope of distrusting the organization of protests.

Schools across the most populous province of Punjab were closed.

In the commercial hub of Karachi in the south, normally bustling markets were shuttered.

A Reuters photographer saw about 100 protesters using stones, pieces of wood and motor-bikes to create a barricade across one main road.

Bibi’s whereabouts were not known on Friday. Her family has been in hiding this week.