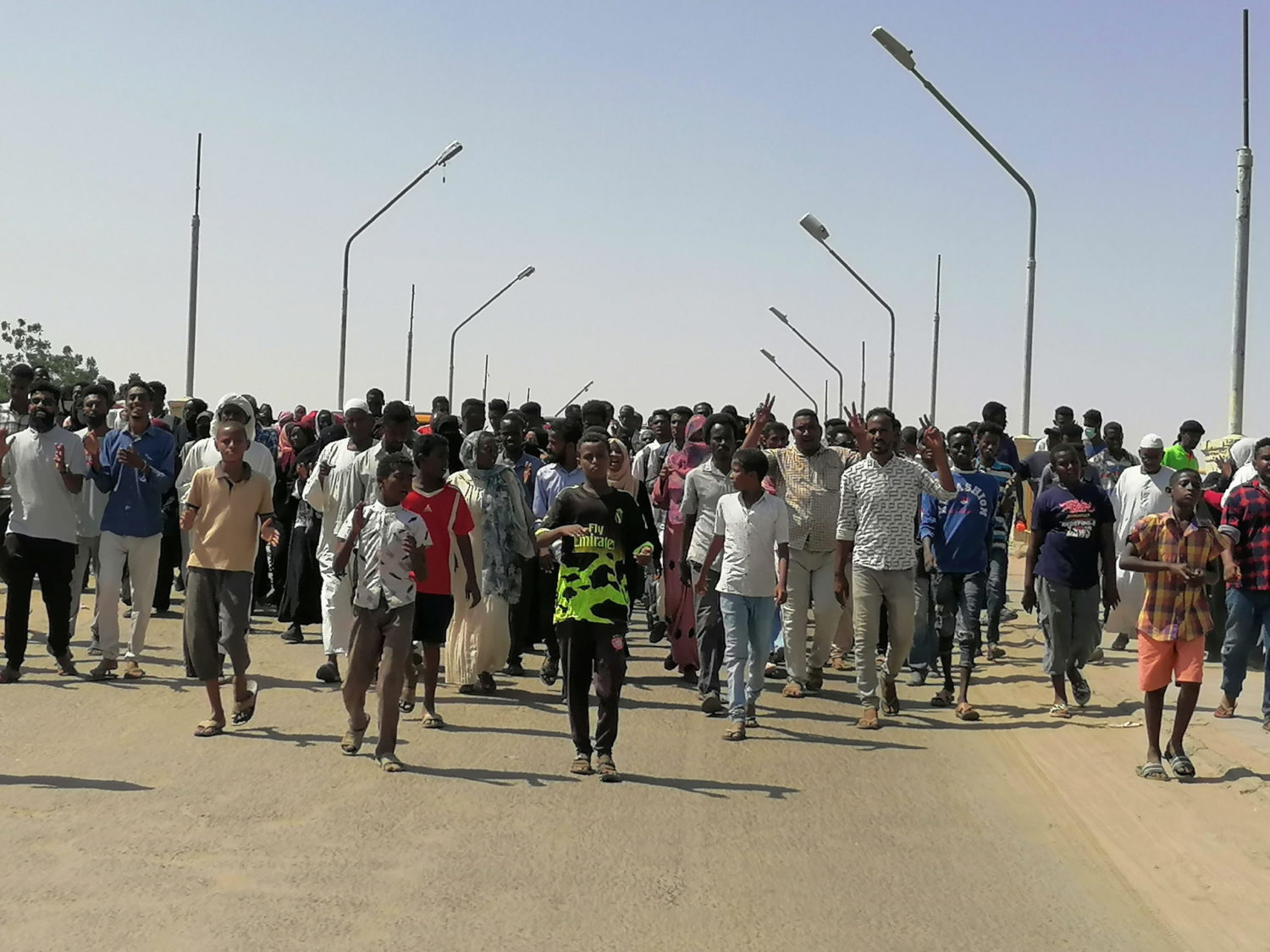 KHARTOUM (Reuters) -The Sudanese army faces widening opposition to this week’s coup with the U.N. Security Council on Thursday urging the restoration of the civilian-led transitional government and activists in Sudan mobilizing for protests this weekend.

The takeover, led by General Abdel Fattah al-Burhan on Monday against a civilian government, has brought thousands of people on to the streets to reject a return of military rule and demand a transition towards civilian rule be put back on track.

Witnesses told Reuters they saw security forces use live and rubber bullets against protesters in Bahri, across the river from the capital, Khartoum, as nightly protests began to pick up.

The Security Council expressed serious concern about the takeover and urged all parties to exercise maximum restraint and engage in dialogue without pre-conditions.

In a statement, agreed by consensus, the 15-member body also called for the immediate release of all those who have been detained by the military.

The coup brought an end to a shaky transitional set-up intended to lead to elections in 2023 by sharing power between civilians and the military following the fall of Omar al-Bashir, whom the army deposed after a popular uprising two years ago.

It has been met with broad condemnation from Western governments including the United States which threw diplomatic and financial weight behind the transition and has frozen aid since the coup.

In a statement posted on Facebook overnight, ministries and agencies of Sudan’s most populous state, Khartoum, which includes the capital and twin city Omdurman, said they would not step aside or hand over their duties.

They declared a general strike, joining unions in sectors such as healthcare and aviation, although they said they would continue to supply flour, cooking gas and emergency medical care.

The main market, banks and filling stations in Khartoum were still closed on Thursday. Hospitals were providing only emergency services. Smaller shops were open, but there were long queues for bread.

U.S. Secretary of State Antony Blinken tweeted overnight that he had spoken by phone to Foreign Minister Mariam Sadiq al-Mahdi.

Blinken said he condemned the arrest of civilian leaders in Sudan and discussed with Mahdi “how the U.S. can best support the Sudanese people’s call for a return to civilian-led transition to democracy”.

A U.N. official urged Burhan to start a dialogue with ousted Prime Minister Abdalla Hamdok and offered to facilitate a political settlement.

A statement issued by the office of U.N. special representative to Sudan Volker Perthes did not say how Burhan had responded to the offer made at a meeting on Wednesday.

Hamdok, initially held at Burhan’s residence, was allowed to return home under guard on Tuesday. A source close to him said he remains committed to a civilian democratic transition and the goals of the revolt that toppled Bashir.

The toll of people killed in clashes with security forces since Monday climbed to eight, with a 22-year-old man dying of gunshot wounds, a medical source said. Opponents fear the army-led authorities could deploy more force.

The source close to Hamdok said the prime minister had called for the military to avoid violence against protesters.

Opponents of the coup have been handing out fliers calling for a “march of millions” on Saturday against military rule, falling back on old methods of mobilization with the authorities restricting the use of internet and phones.

The protest is being called under the slogan “Leave!” used in the protests that brought down Bashir.

Since the anti-Bashir uprising, protests have been organized through neighborhood committees that can mobilize locally without access to the internet or to major roads closed by security forces.

Sudan has been in the midst of a deep economic crisis with record inflation and shortages of basic goods, which only recently showed signs of possible improvement helped by aid that major Western donors say will end unless the coup is reversed.

More than half the population is living in poverty and child malnutrition stands at 38%, according to the United Nations.

Burhan’s move reasserted the army’s dominant role in Sudan since independence in 1956, after weeks of mounting tension between the military and civilians in the transitional government over issues including whether to hand Bashir and others over to The Hague where they are wanted for war crimes.

Burhan has said he acted to stop the country slipping into civil war and has promised elections in July 2023.

Western envoys had warned Burhan that assistance, including a now frozen $700 million in U.S. aid and $2 billion from the World Bank, would cease if he took power. Sources said he ignored those warnings under pressure from inside the military and with a “green light” from Russia.

(Reporting by Khalid Abdelaziz in Khartoum and Nafisa Eltahir in Cairo; Writing by Tom Perry; Editing by Peter Graff and Nick Macfie) 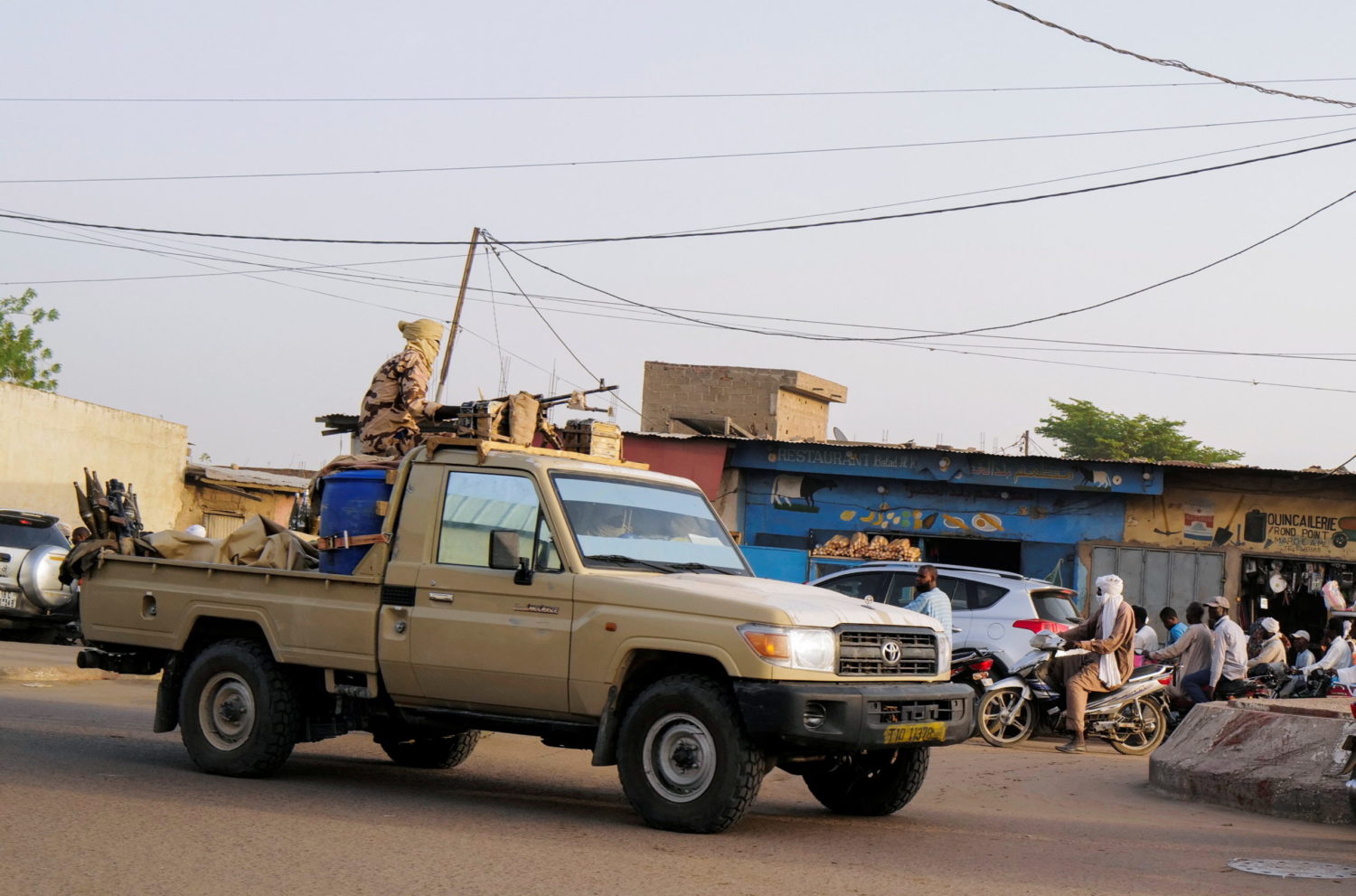 By Edward McAllister and Mahamat Ramadane

N’DJAMENA (Reuters) -At least two people were killed and 27 injured in Chad on Tuesday as demonstrators took to the streets demanding a return to civilian rule after the military took control following President Idriss Deby’s death last week.

Tensions have risen in Chad following Deby’s death and the military transition is struggling to win over a population exhausted by 30 years of monolithic, autocratic rule.

A health official at a hospital in the capital N’Djamena, who requested anonymity, confirmed the death of a man in his 20’s who was brought into the emergency ward along with 27 other people injured during Tuesday’s protests.

A spokesman for the ruling military council said security forces were attempting to contain the protesters while limiting material damage.

The military council seized power after Deby was killed as he visited troops fighting rebels on April 19.

Some opposition politicians have called the military takeover a coup and asked supporters to protest, even as the army appointed a civilian politician, Albert Pahimi Padacke, as prime minister of a transitional government on Monday.

The military council banned protests in a statement on Monday evening, saying no demonstrations that could lead to disorder were allowed while the country was still in mourning.

Headed by Deby’s son Mahamat Idriss Deby, who was declared president, the military council has said it will oversee an 18-month transition to elections.

“We do not want our country to become a monarchy,” said 34-year-old protester Mbaidiguim Marabel. “The military must return to the barracks to make way for a civilian transition.”

Trucks loaded with soldiers were seen patrolling the streets around central N’Djamena.

“The police came, they fired tear gas. But we are not scared,” said Timothy Betouge, age 70.

Police responded with tear gas as protesters burned tires in several neighborhoods of N’Djamena early on Tuesday. A Reuters witness said firefighters struggled to contain a blaze which was large enough to be seen from far away.

The council is coming under international pressure to hand over power to civilians as soon as possible. The African Union has expressed “grave concern” about the military takeover, while France, the former colonial ruler, and some of Chad’s neighbors are pushing for a civilian-military solution.

Anti-French sentiment was running high among the protesters, who blamed France for having backed the Deby regime against the will of the people. Posts on social media showed protesters burning a French flag.

Reuters reporters in N’Djamena were repeatedly berated by protesters who assumed they were French and told them to “go back to France”. The reporters saw businesses with French connections, such as a Total fuel station, being targeted by protesters.

Deby’s death came as Chad’s military battles an insurrection by Libya-based rebels known as the Front for Change and Concord in Chad (FACT). The rebels came as close as 200-300 km (125-185 miles) from N’Djamena before being pushed back by the army.

Chad’s military council rejected an offer from the rebels for peace talks on Sunday, calling them “outlaws” who needed to be tracked down and arrested for their role in Deby’s death.