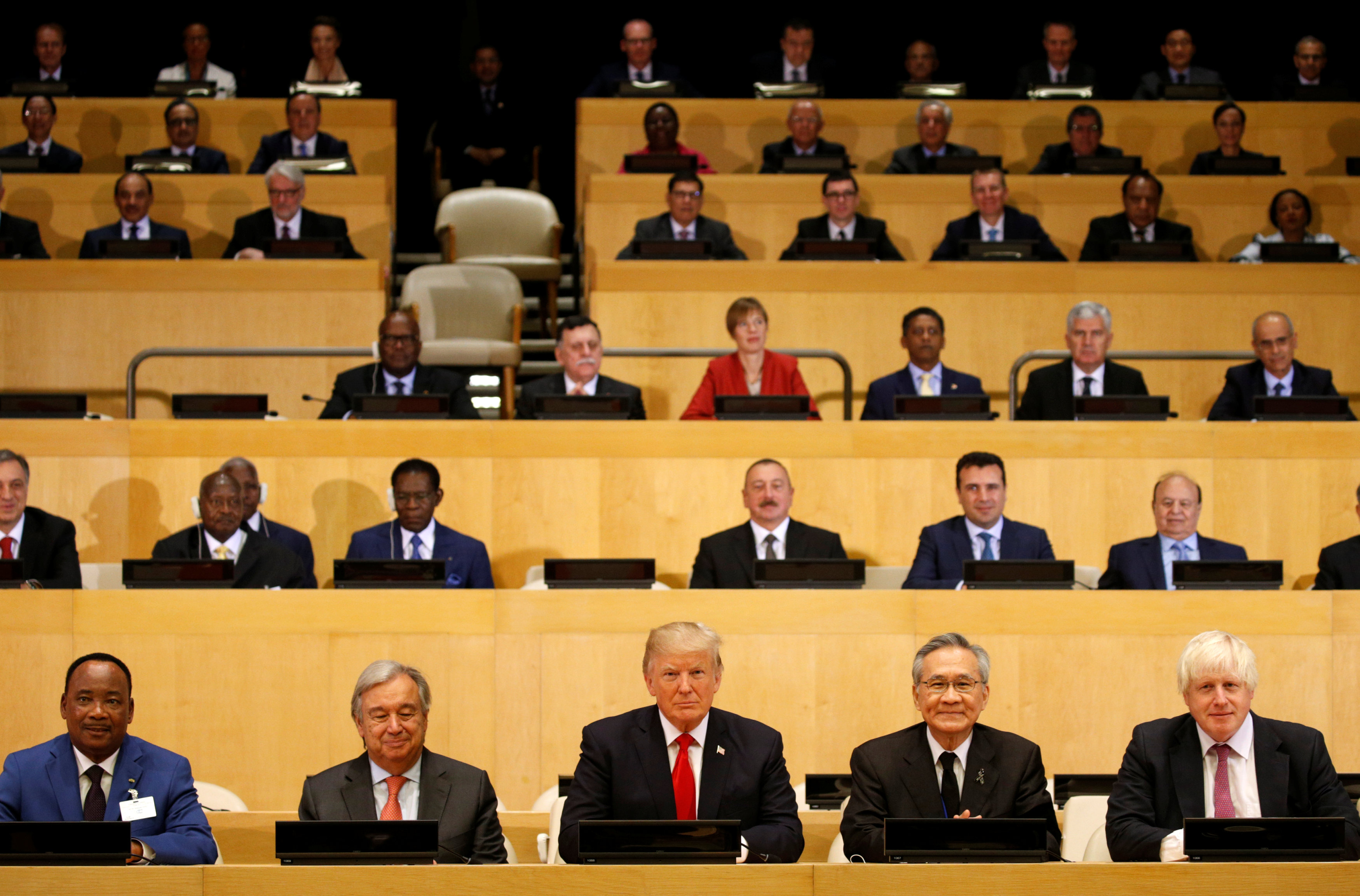 UNITED NATIONS (Reuters) – North Korea’s nuclear threat looms large this week over the annual gathering of world leaders at the United Nations in New York, where diplomats are eager to hear U.S. President Donald Trump address the 193-member body for the first time.

North Korean diplomats will have a front-row seat in the U.N. General Assembly for Trump’s speech on Tuesday morning, which will touch on the escalating crisis that has seen Trump and Pyongyang trade threats of military action.

Despite his skepticism about the value of international organizations and the United Nations in particular, Trump will seek support for tough measures against North Korea, while pressing his “America First” message to the world body.

U.N. Secretary-General Antonio Guterres – who, like Trump, took office in January – plans to meet separately with “concerned parties,” including North Korean Foreign Minister Ri Yong-ho, on the sidelines of the 72nd General Assembly.

“The solution can only be political. Military action could cause devastation on a scale that would take generations to overcome,” Guterres warned on Wednesday.

A week ago, the 15-member U.N. Security Council unanimously adopted its ninth sanctions resolution since 2006 over North Korea’s nuclear and ballistic missile programs.

U.S. Ambassador to the United Nations Nikki Haley said U.N. sanctions had banned 90 percent of the Asian state’s publicly reported exports, saying of Pyongyang on Friday: “This is totally in their hands on how they respond.”

Haley told CNN’s “State of the Union” program on Sunday that Washington had “pretty much exhausted” its options on North Korea at the Security Council.

Ri is due to address the General Assembly on Friday.

Some leaders will also push Trump not to give up on a 2015 deal curbing Iran’s nuclear ambitions in return for a lifting of U.N., U.S. and European sanctions, while Israeli Prime Minister Benjamin Netanyahu said it was time to “fix it – or cancel it.”

The foreign ministers of Iran, the United States, Britain, Germany, Russia, China and France – the parties to the agreement – are due to meet on Wednesday ahead of an October deadline for Trump to tell Congress if he believes Tehran is sticking to what he has described as “the worst deal ever negotiated.”

When asked on Friday what Moscow’s message would be for Washington, Russia’s U.N. ambassador, Vassily Nebenzia, said: “Stay in the JCPOA (the nuclear deal).”

A senior U.N. Security Council diplomat, speaking on condition of anonymity, said: “We are faced with real uncertainties with respect to North Korea and it’s a bit dangerous … to add another source of uncertainty with respect to Iran.”

Iran’s Supreme Leader Ayatollah Ali Khamenei said on Sunday his country would not be bullied by the United States and would react strongly to any “wrong move” by Washington on the nuclear deal.

Iran and North Korea will also feature heavily during a ministerial Security Council meeting on Thursday, at the request of the United States, to discuss the proliferation of weapons of mass destruction.

While leaders and diplomats are also due to meet on longer-running crises including Libya, Syria, South Sudan, Mali, Central African Republic, Yemen and Iraq, a last-minute addition has been Myanmar, where the United Nations has branded violence against Rohingya Muslims as “ethnic cleansing.”

Britain is due to host a ministerial meeting on Monday to seek a way to get Myanmar authorities to end a military offensive in the country’s Rakhine state that has sent more than 400,000 minority Rohingya Muslims fleeing to Bangladesh.

Following Trump’s announcement that the United States would withdraw from a landmark 2015 global agreement to fight climate change, several high-level gatherings are planned on the sidelines of the General Assembly to bolster the deal.

“Climate change is a serious threat,” Guterres told reporters. “Hurricanes and floods around the world remind us that extreme weather events are expected to become more frequent and severe, due to climate change.”

U.S. Secretary of State Rex Tillerson appeared to hold the door open for the United States to remain in the Paris climate accord “under the right conditions.”

“The president said he is open to finding those conditions where we can remain engaged with others on what we all agree is still a challenging issue,” Tillerson said on CBS’ “Face The Nation” program on Sunday.

Trump will seek to boost support for reforming the United Nations, which he once called “a club for people to get together, talk and have a good time.”

The United States is the largest U.N. contributor and Trump has complained that Washington pays too much.

“The United Nations, of course, holds tremendous potential to realize its founding ideals, but only if it’s run more efficiently and effectively,” McMaster said on Friday.

(Reporting by Michelle Nichols at the United Nations; Editing by Yara Bayoumy and Peter Cooney)

The storm was just one of the instances of extreme weather chronicled in Aon Benfield’s most recent monthly report on global catastrophes, which recap the economic effects of the events.

The report also detailed the impacts of extreme cold weather in Asia, flooding fueled by the El Nino weather pattern and earthquakes, wildfires and droughts that occurred in January.

The mid-Atlantic snowstorm, which The Weather Channel was calling Winter Storm Jonas, killed 58 people and led 11 states and the District of Columbia to declare states of emergency, according to the Aon Benfield report. The report noted the National Oceanic and Atmospheric Administration (NOAA) recently named the storm the fourth-biggest winter storm to hit that part of the United States in the past 66 years, according to its Northeast Snowfall Impact Scale.

The National Weather Service has said that snowfall totals reached double digits in 14 states, and portions of Connecticut, Delaware, Kentucky, Maryland, New Jersey, New York, Pennsylvania, Virginia and West Virginia all received more than a foot and a half of snow.

Last month, the NOAA’s National Centers for Environmental Information reported the United States experienced 10 billion-dollar weather and climate disasters in 2015. If Aon Benfield’s numbers are accurate, the winter storm appears to be the first such disaster of the New Year.

The company said Asia saw rare snowfall and some of its coldest temperatures in six decades, which killed at least 116 people in Taiwan, Thailand, Japan, South Korea and China last month. The report estimated the weather led to $2 billion in losses, $1.6 billion of which were in China.

The report linked the California storms, South American flooding and South African drought to the El Nino weather pattern, which several scientists have said is one of the strongest on record.

The pattern occurs when a portion of the Pacific Ocean is warmer than usual, setting off a far-reaching ripple effect that brings atypical and often extreme weather across the world.

The continental United States experienced one of its warmest and wettest years in history in 2015, the National Oceanic and Atmospheric Administration (NOAA) announced Thursday.

Temperatures and precipitation totals were well above long-term averages, according to the year-end report published by the NOAA’s National Centers for Climate Information, and the final numbers indicated the nation had its second-warmest and third-wettest year on record.

The nation also was hit by five different types of weather and climate disasters — flooding, droughts, wildfires, extreme cold and severe storms — a variety the NOAA said is not usually seen. There were 10 disasters in total, and each of them caused at least $1 billion in losses.

The NOAA reported the average temperature in the United States last year was 54.4 degrees Fahrenheit, 2.4 degrees above the nation’s 20th-century average, but .88 degrees lower than the record-setting year of 2012. The average precipitation total in the lower 48 states was 34.47 inches, 4.53 inches above the average level, and the influx of rainfall helped reduce the national drought footprint by about 10 percent. The only wetter years on record are 1973 and 1983.

Every single one of the lower 48 states posted above-average yearly temperatures, the NOAA said, and Washington, Florida and Oregon all posted their warmest years on record. The same can be said of southeastern Louisiana and western Montana.

The temperature and precipitation records date to 1895.

The NOAA also said 10 weather and climate disasters occurred across the nation last year, including wildfires and droughts in the west, flooding in South Carolina, Texas and the midwest, a cold wave in the northeast, tornadoes in Oklahoma and Texas, and severe thunderstorms across the Great Plains. Together, the NOAA said the disasters killed 155 people nationwide.

It’s not common, but also not unheard of, for the United States to see that many different kinds of disasters causing $1 billion in losses in a year. According to the NOAA, the nation usually sees three or four kinds of disasters every year, but five have occurred five other times since 1989.

The overall total of 10 billion-dollar disasters was slightly below the nation’s five-year average of 10.8, the report indicates, but it was still nearly double the 35-year average of 5.2.

The NOAA added the United States has now been the victim of 188 billion-dollar weather and climate disasters since 1980, and they have cumulatively caused more than $1 trillion in losses.