The commission voted unanimously to change the names from Forrest, Hood and Lee, named for leader of the Confederate army, Robert E. Lee, and fellow generals Nathan Bedford Forrest and John Bell Hood. Officials did not say when the signs would be switched.

The planned change highlights a persistent debate in the U.S. South over the display of the Confederate battle flag and other symbols of the rebel side who fought for the preservation of slavery in the 1861-1865 Civil War.

Such efforts gained momentum after violence at an Aug. 12 rally in Charlottesville, Virginia. The violent protests over the planned removal of a statue of Lee renewed the national debate over whether the memorials are symbols of heritage or hate.

In Hollywood, about 20 miles (32 km) north of downtown Miami, the issue led to three protests, two in support of the street name changes, and one against. There were several heated city commission meetings, the most recent in late August when the city voted that the streets would be renamed.

On Wednesday, the new names for the streets were finalized.

In August, people who supported keeping the Confederate street names – which date from the 1920s – said they did not think of Confederate generals but rather their own personal histories as they drove, or resided, on them.

Linda Anderson, who asked in June for the city to change the names, said she was part of an unsuccessful effort to rename them 15 years ago. She lives on the newly named Hope Street.

“It’s good to finally remove those names because they were for slavery,” said Anderson in a phone call with Reuters. “I’ll be glad when the new signs go up.”

(Reuters) – Undeterred by the violence over the planned removal of a Confederate statue in Charlottesville, Virginia, municipal leaders in cities across the United States said they would step up efforts to pull such monuments from public spaces.

The mayors of Baltimore and Lexington, Kentucky, said they would push ahead with plans to remove statues caught up in a renewed national debate over whether monuments to the U.S. Civil War’s pro-slavery Confederacy are symbols of heritage or hate.

Officials in Memphis, Tennessee, and Jacksonville, Florida, announced new initiatives on Monday aimed at taking down Confederate monuments. And Tennessee Governor Bill Haslam, a Republican, urged lawmakers to rid the state’s Capitol of a bust of Nathan Bedford Forrest, a Confederate general and early member of the Ku Klux Klan.

“This is a time to stand up and speak out,” Lexington Mayor Jim Gray said in an interview on Monday. He had moved up the announcement of his city’s efforts after the Charlottesville violence.

The clashes between white supremacists and counter protesters that left three dead in Charlottesville on Saturday, including two police officers whose helicopter crashed, appeared to have accelerated the push to remove memorials, flags and other reminders of the Confederate cause.

Some opponents appeared to take matters into their own hands. A crowd of demonstrators stormed the site of a Confederate monument outside a courthouse in Durham, North Carolina, on Monday and toppled the bronze statue from its base.

In Baltimore, a Confederate monument of a dying Confederate soldier embraced by a winged angel-like figure was found defaced by red paint, apparently an act of vandalism carried out over the weekend, the Baltimore Sun reported.

The drive by civil rights groups and others to do away with Confederate monuments gained momentum after an avowed white supremacist murdered nine African-Americans at a Charleston, South Carolina, church in 2015. The deadly shooting rampage ultimately led to the removal of a Confederate flag from the statehouse in Columbia.

In all, as of April, at least 60 symbols of the Confederacy had been removed or renamed across the United States since 2015, according to the latest tally by the Southern Poverty Law Center.

But such efforts also have made Confederate flags and memorials a rallying point for white supremacists and other groups of the extreme right, according to Ryan Lenz, a spokesman for the law center, which tracks hate groups.

While opponents of Confederate memorials view them as an affront to African-Americans and ideals of racial diversity and equality, supporters of such symbols argue they represent an important part of history, honoring those who fought and died for the rebellious Southern states in the Civil War.

New Orleans’ efforts to dismantle four Confederate statues sparked protests and litigation that became so contentious that crews waited until the middle of the night to remove a 14-foot-tall bronze likeness of Confederate General P.G.T. Beauregard on horseback in May.

The violence in Charlottesville is unlikely to bolster the argument about the value of maintaining the monuments for historical value, Carl Jones, chief of heritage operations for the Sons of Confederate Veterans, said in a telephone interview. But he said he would continue to make that case.

“Where does it stop?” he said. “The Egyptian pyramids were built by slaves. Do we tear those down?”

Across the country, 718 Confederate monuments and statues remain, with nearly 300 of them in Georgia, Virginia or North Carolina, according to the Southern Poverty Law Center.

There are also 109 public schools named for Robert E. Lee, Confederate President Jefferson Davis or other icons of the Civil War-era South, the group said.

On Monday, Baltimore Mayor Catherine Pugh said in a statement she intended to move forward in removing several city statutes, including those of Lee and Stonewall Jackson. She stopped short of endorsing some city council members’ calls for the monuments to be destroyed.

Memphis officials said the city would take legal action to get state approval to remove a Confederate statue there. The city council voted to remove it in 2015, but the effort was blocked by the state historical commission, according to a WREG-TV.

In Kentucky, Gray said he had heard opposition to his plans but also had received offers to pay for the statutes to be relocated as early as this fall.

“We expected criticism,” he said. “It’s a challenging and polarizing time – and issue.” 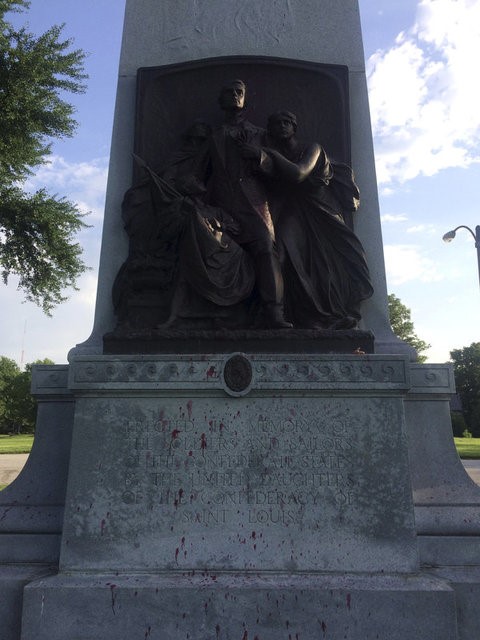 (Reuters) – A controversial Confederate monument in St. Louis will be dismantled by the end of the week under an agreement announced on Monday, city officials said.

The granite and bronze memorial was the latest Confederate monument to be targeted as U.S. cities remove the structures seen as reminders of slavery and the racism that underpinned it.

St. Louis reached the agreement with the Missouri Civil War Museum and other groups after a lawsuit halted the city’s effort to dismantle the 32-foot memorial earlier this month, according to the mayor’s office.

The museum will pay for the removal by June 30 and store it until a new location can be found at a museum, a battlefield or a cemetery that must be outside the city, according to a copy of the agreement.

Workers were already taking apart the monument in the city’s Forest Park on Monday, shortly after the settlement was announced, St. Louis Post-Dispatch reported.

“We wanted it down,” St. Louis Mayor Lyda Krewson said at a live-streamed news conference on Monday, explaining that the structure symbolized slavery.

The push to remove Confederate monuments accelerated after the 2015 murder of nine African-Americans by an avowed white supremacist at a South Carolina church sparked a national debate about symbols of racism.

New Orleans recently dismantled the last of four Confederate statues that stood in the city, and Kentucky moved a Confederate monument from the University of Louisville campus to outside the city in Brandenburg, Kentucky.

The St. Louis monument, located on the park’s Confederate Drive, which may also be renamed, was dedicated in December 1914 by the Ladies’ Confederate Monument Association, according to the website of Forest Park Forever, which partners with the city to maintain the park. It depicts The Angel of the Spirit of the Confederacy hovering above a bronze sculpture of a family sending a soldier off to war.

It has been repeatedly vandalized with graffiti reading “Black Lives Matter” and “End Racism,” according to news reports, and the city has discussed removing it for several years.

Patsy Limpus, who heads the United Daughters of the Confederacy Missouri Division and the St. Louis Confederate Monument Association, also party to the agreement, told the Post-Dispatch Monday that the monument helped residents learn from history.

“Even though some people don’t like, it is part of history,” she said.