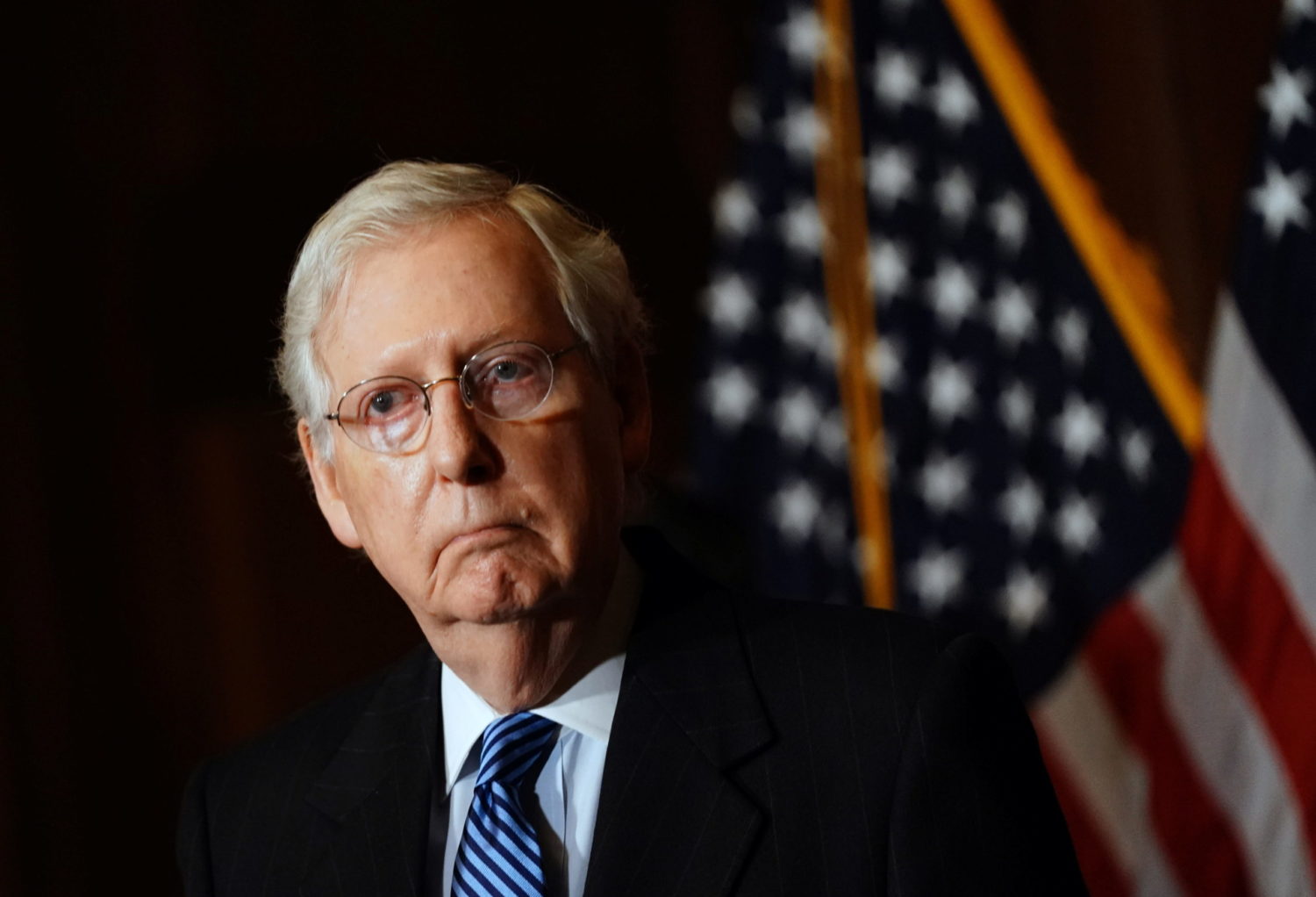 WASHINGTON (Reuters) – U.S. Senate Majority Leader Mitch McConnell said on Wednesday that lawmakers were still striving for agreement on COVID-19 aid, as a bipartisan group released details of their proposal and the U.S. House of Representatives prepared to vote on a one-week funding bill to provide more time for a deal.

With agreement elusive, the House was poised to vote on Wednesday afternoon on a measure to prevent federal programs from running out of money on Friday at midnight (0500 GMT on Saturday) by extending current funding levels until Dec. 18.

The move gives Congress seven more days to enact a broader, $1.4 trillion “omnibus” spending measure, to which congressional leaders hope to attach the long-awaited COVID-19 relief package – if they can reach a deal on both fronts.

The bipartisan group of lawmakers from the House and Senate released a summary of their $908 billion plan aimed at breaking the months-long stalemate between the parties over more coronavirus relief.

The proposal would extend for 16 weeks pandemic-related unemployment insurance programs due to expire at the end of the month. The measure would also provide an extra $300 a week in supplemental unemployment benefits for 16 weeks, from the end of December into April.

“We are literally on the five-yard line now,” said Democratic Representative Josh Gottheimer, a member of the bipartisan group. “We have no choice but to get this done.”

The summary said there was agreement in principle on two thorny issues: liability protections for businesses desired by Republicans and $160 billion in aid to state and local governments sought by Democrats. Lawmakers said they were still working on details.

On Tuesday evening, Treasury Secretary Steven Mnuchin weighed in for the first time since before the November election, saying he had presented a $916 billion relief proposal to Pelosi that includes money for state and local governments and liability protections for businesses.

But Pelosi and Schumer said they viewed the bipartisan negotiations as the best hope for COVID-19 relief.

Other Democrats also reacted cautiously to Mnuchin’s proposal, asking why it lacked supplementary benefits for the unemployed while including direct checks of $600 for all individuals.

“How can anybody say that I’m gonna send another check to people that already have a paycheck and job, and not send anything to the unemployed? It doesn’t make any sense to me at all,” said Senator Joe Manchin, a member of the bipartisan group, told reporters.

After the vote Wednesday on the stopgap funding measure in the Democratic-run House, the Republican-led Senate is expected to follow by the end of the week, then send the measure to President Donald Trump to sign into law.

Congress approved $3 trillion in aid in the spring to mitigate the effects of shutdowns to curb the spread of the coronavirus, but legislators have not been able to agree on any additional help since.

The pandemic has roared back to levels surpassing those seen early in the crisis, with more than 200,000 new infections reported each day and fresh shutdowns in some areas. More than 287,000 Americans have died of COVID-19 so far, and millions have been thrown out of work. 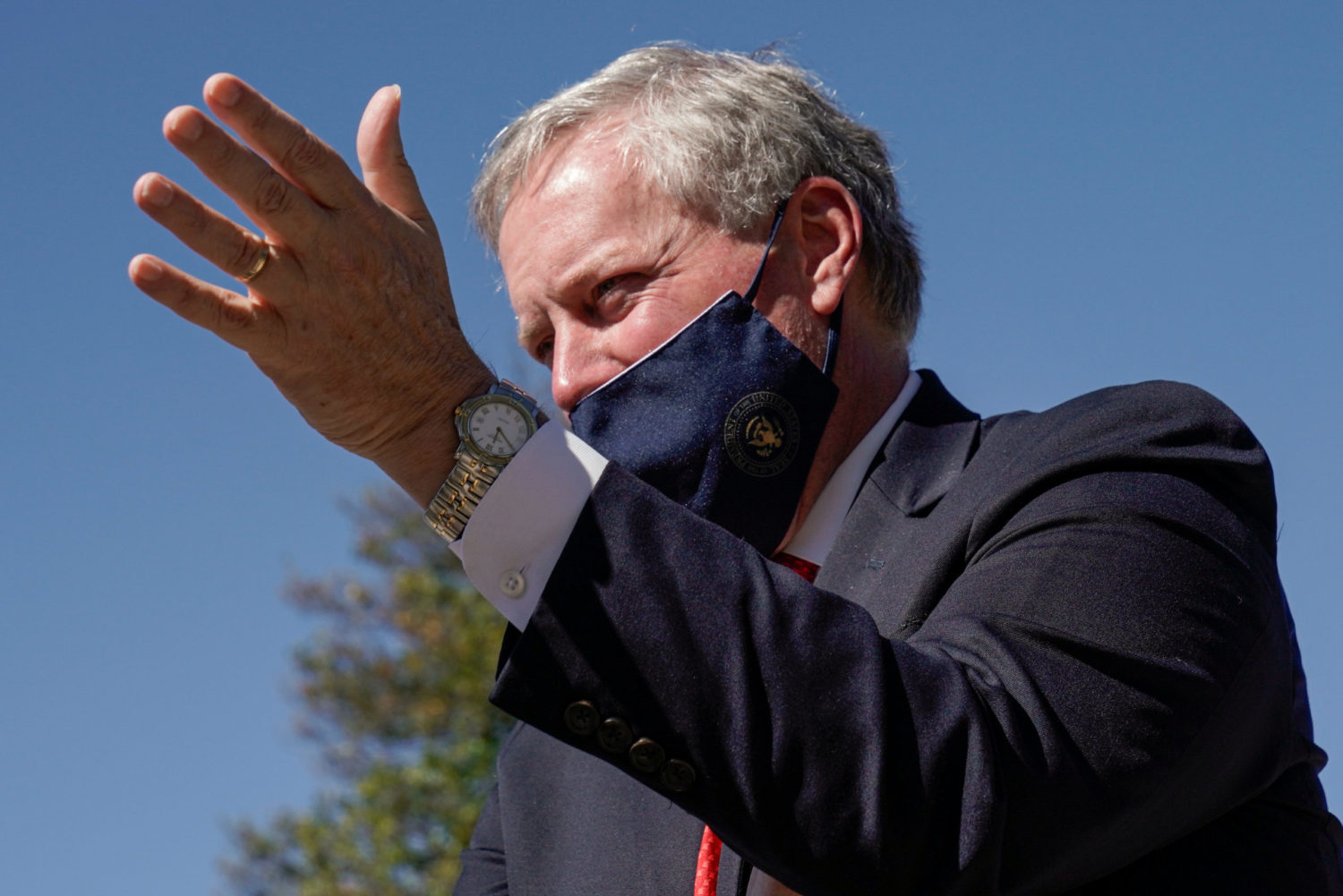 WASHINGTON (Reuters) – White House chief of staff Mark Meadows on Wednesday said he was not optimistic that a comprehensive deal could be reached on further COVID-19 financial aid and that the Trump administration backed a more piecemeal approach, even as he said negotiations with Congress were over.

“We’re still willing to be engaged, but I’m not optimistic for a comprehensive deal. I am optimistic that there’s about 10 things that we can do on a piecemeal basis,” Meadows told Fox News in an interview.

Meadows did not say what 10 items the administration wanted to tackle, but reiterated President Donald Trump’s position tweeted late Tuesday night that he would back separate legislation addressing airlines, small businesses and stimulus checks for individuals.

Trump called off talks with lawmakers on pandemic aid in a tweet on Tuesday, rattling Wall Street as U.S. stocks sank. He later pulled back saying he would support a few stand-alone bills.

“The stimulus negotiations are off,” Meadows later told reporters at the White House on Tuesday. “Obviously we’re looking at the potential for stand-alone bills. There’s abut 10 things that we agree on and if the Speaker is willing to look at it on a piece-by-piece basis then we’re willing to look at it,” he said referring to U.S. House Speaker Nancy Pelosi.

The Democratic-led House has already passed full legislation seeking a wide range of aid as the novel coronavirus continues to spread, infecting an estimated 7.5 million Americans and killing more than 210,600 — the highest in the world. 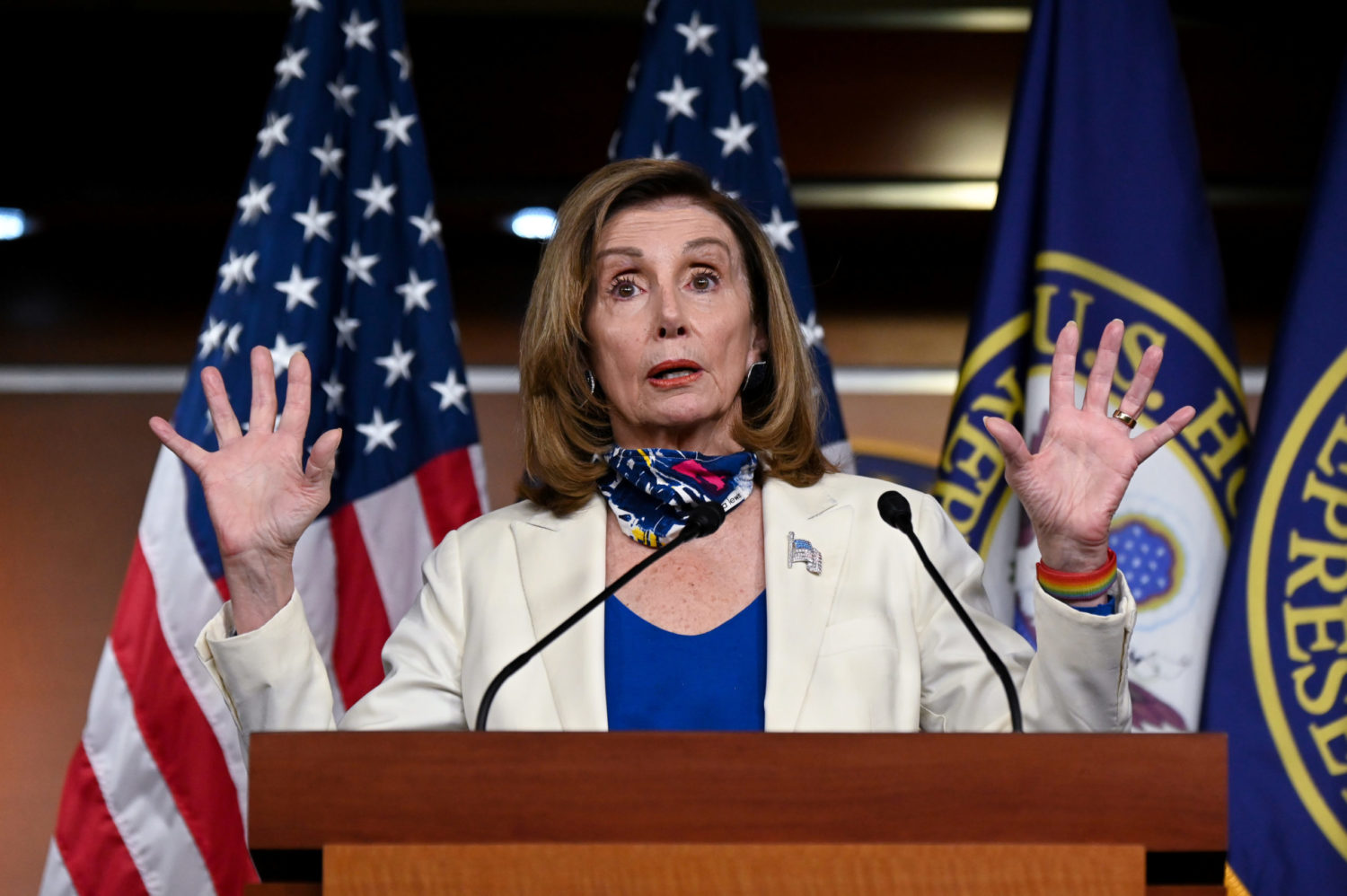 WASHINGTON (Reuters) – U.S. House Speaker Nancy Pelosi cautioned on Thursday that Democrats and the Trump administration remain far from agreement on COVID-19 relief in several key areas, saying the two sides were locked in debate over both dollars and values.

Congressional Democrats led by Pelosi have proposed a $2.2 trillion package to respond to a pandemic that has killed more than 207,000 Americans and thrown millions out of work. Republican President Donald Trump’s negotiating team has suggested a $1.6 trillion response, and the White House on Thursday dismissed Democrats’ offer as not serious.

As lawmakers prepared to leave Washington for the remaining weeks of the 2020 presidential and congressional campaign, Pelosi was to speak again to Treasury Secretary Steven Mnuchin by phone at 1 p.m. EDT (1700 GMT), a source familiar with the situation said. They were expected to try to bridge divisions over aid to state and local governments, Democratic demands for a child tax credit and stronger worker safety, healthcare and small businesses.

“We not only have a dollars debate, we have a values debate. Still, I’m optimistic,” Pelosi said at her weekly news conference.

Pelosi said of the White House proposal on Bloomberg TV: “This isn’t half a loaf. What they’re offering is the heel of the loaf.”

A bipartisan deal has been long delayed by disagreements over Democratic demands for aid to state and local governments and Republican insistence for a provision protecting businesses and schools from coronavirus-related lawsuits.

Republican Senator Mike Braun told CNBC on Thursday that a deal worth over $1.6 trillion could be rejected by one-third to one-half of Senate Republicans. That would still allow a bill to pass with support from Democrats.

Pelosi and Mnuchin met for 90 minutes in the U.S. Capitol on Wednesday and each emerged pledging to continue discussions.

Mnuchin raised hopes of an agreement by telling reporters that the discussions had made “a lot of progress in a lot of areas.”

Lawmakers and securities analysts viewed talks as a last-gasp effort to secure relief ahead of the Nov. 3 election for tens of millions of Americans and business including U.S. airlines, which have begun furloughing over 32,000 workers.

The Trump administration has proposed a $20 billion extension in aid for the battered airline industry, White House chief of staff Mark Meadows told reporters late on Wednesday. The extension would run for six months.

Mnuchin said separately that a deal would also include direct payments to American individuals and families.

Pressure for a deal has been mounting on the White House and Congress, from the devastating effects of a coronavirus pandemic that has infected more than 7.2 million people in the United States.

The House of Representatives was expected to vote on its $2.2 trillion Democratic package, a day after initial plans for action were delayed to give more time for a deal to come together.

Senate Majority Leader Mitch McConnell, a Republican who has not participated directly in the negotiations, said on Wednesday that the House bill’s spending total was too high.