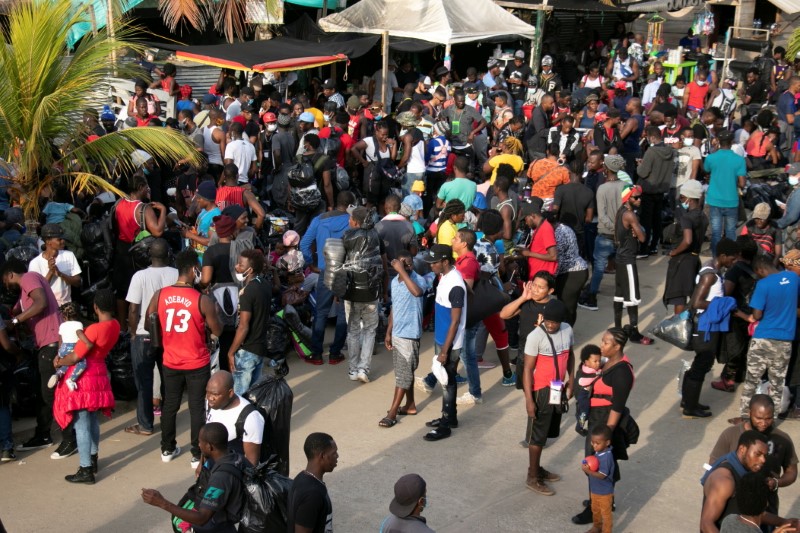 NECOCLI, Colombia (Reuters) – After traveling for more than a year by ship, bus and car from Africa in hope of reaching the United States, Simon Gyamfi found himself stuck in a remote tourist resort on the coast of Colombia with thousands of other migrants.

The 42-year-old carpenter, a Christian, fled his home in Ghana because of a dispute with his late wife’s Muslim family, he said, and took a month-long ocean voyage to Brazil. The closure of borders due to the coronavirus pandemic left him stranded there for months.

Now, after the frontiers finally reopened, he has made his way by road to the northern Colombian town of Necocli, a gateway for migrants heading northward into Central America.

Every year, thousands of migrants pass through the small town, looking to catch a boat across the Gulf of Uraba toward the jungles of the Darien Gap on the isthmus of Panama.

There, people smugglers guide groups across the wild, road-less region, one of the most treacherous barriers on the clandestine route to the United States.

Now borders closures have lifted, the number of migrants arriving in Necocli is soaring.

In a typical year, an estimated 30,000 migrants pass through Necocli. But by August of this year, 25,000 have already been through, according to Colombian government figures.

Panama’s Foreign Affairs ministry said it expects to receive over 70,000 migrants crossing the country en route to the U.S. by the end of 2021, an unprecedented number in the country’s history.

The town has been struggling to accommodate migrants from Latin America and beyond – many of them driven by the economic hardship worsened by the pandemic – clamoring for scarce places on boats across the Gulf. Thousands crowd hotels and the beach as they wait weeks for a spot.

Colombia and Panama vowed last week to impose order on the migrant flows as they seek support from allies, including the United States, after the number of travelers stranded in Necocli topped 10,000.

The majority of the migrants moving through Necocli are Haitian or Cuban, fleeing dire economic circumstances in their homelands. But Reuters spoke to several others from further afield, including African nations such as Ghana and Mali.

Gyamfi had been in Necocli for almost a week, paying $7 a night for a hotel room.

“The journey has been hard and full of surprises. Last month, a friend of mine died on the road,” said the widowed carpenter, who hopes to save enough to bring his young daughter to join him if he reaches the United States.

“It takes a lot of money to get here and great risks.”

Necocli became a staging area for migrants just five years ago. Though it has thrived by charging migrants in dollars, not Colombian pesos, local officials say public services and housing in the town of 20,000 are not robust enough to cope with recent numbers.

More migrants has meant increased profits for many in Necocli: especially for the guides, called coyotes, who take people on the week-long trek through the Darien Gap.

“Everyone here is benefiting from the migrant issue,” said a local guide leader, a man in his early 40s, who asked to remain anonymous for fear of attracting the attention of the authorities.

Colombia’s government has warned of criminal dangers to migrants moving through Darien, as well as the risk of injury or disease.

The man acknowledged some groups – usually comprising 20 migrants and a guide – have been robbed and women sometimes suffer rape.

The guides have increased the size of their groups to meet recent demand, but the man denied any criminal connections.

“People look at us like the monsters of this place. They think we are rich,” he said. “Those who do this make a living day to day. The coyotes aren’t millionaires.”

At 6 a.m. the sound of adhesive tape being ripped from its rolls sounded around Necocli’s port, as migrants with spots on that day’s boat frantically sealed their possessions into plastic trash bags for the 2.5-hour, $50 boat ride across the Gulf of Uraba.

The day Reuters visited, the mayor of Acandi – which lies on the other side of the Gulf, near the Panama border – decided to let just 200 of the usual 1,000 migrants cross because of what he said were environmental and security concerns.

The decision caused chagrin among local Colombian officials and nonprofits – who feared some migrants might make a dangerous informal crossing at night. In Necocli, angry migrants who had paid days in advance for boat tickets protested in the streets.

In Capurgana, 44-year-old Haitian Lenos Dorvilien, was frustrated after he had traveled across the Gulf ahead of his wife and 12-year-old daughter, who were now stuck in Necocli.

The family had left their homeland for Chile in 2016, but found work there was badly paid. They had planned to leave sooner but were delayed by coronavirus and finally left two weeks ago by bus.

Chile – which has one of the highest levels of income per capita in Latin America – is a popular destination for Haitians, but migrants there regularly complain of experiencing xenophobia.

“I put up with living in Chile but it’s a racist country,” said Dorvilien. “I had to work hard like the devil to be able to leave.”

Dorvilien eventually took another boat back to be with his family. Their money for hotels exhausted, they slept on the beach.