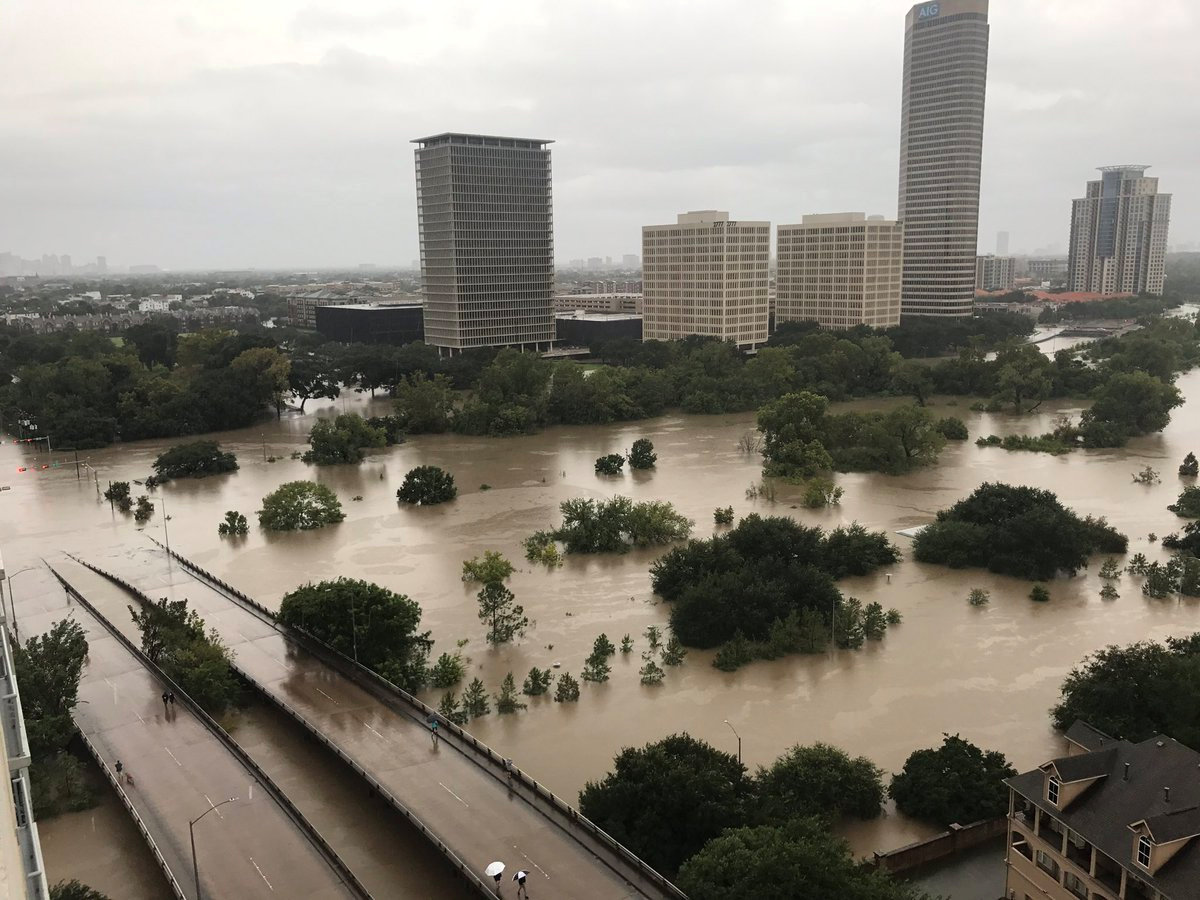 By Gary McWilliams and Ruthy Munoz

HOUSTON (Reuters) – Houston is facing worsening historic flooding in the coming days as Tropical Storm Harvey dumps more rain on the city, swelling rivers to record levels and forcing federal engineers on Monday to release water from area reservoirs in hopes of controlling the rushing currents.

Harvey, the most powerful hurricane to strike Texas in more than 50 years, first hit land late on Friday and has killed at least two people. It has since lingered around Texas’ Gulf Coast, where it is forecast to remain for several more days, drenching parts of the region with a year’s worth of rain in the span of a week.

Schools, airports and office buildings in the nation’s fourth largest city were ordered shut on Monday as scores of roads turned into rivers and chest-high water filled neighborhoods in the low-lying city that is home to about 2.3 million people. The area’s vital petrochemcial industry also was crippled.

Torrential rain also hit areas more than 150 miles (240 km) away, swelling rivers upstream and causing a surge that was heading toward the Houston area, where numerous rivers and streams already have been breached.

More flooding is expected as water levels continue to rise, putting more residents at risk. More than 30,000 people are expected to be placed temporarily in shelters, FEMA Administrator Brock Long said at a news conference on Monday. The National Weather Service said the worst of floods are expected Wednesday and Thursday, although there is still uncertainty over the storm’s path.

The U.S. Army Corps of Engineers said Monday that it was releasing water from two nearby reservoirs into Buffalo Bayou, the primary body of water running through Houston.

“If we don’t begin releasing now, the volume of uncontrolled water around the dams will be higher and have a greater impact on the surrounding communities,” said Colonel Lars Zetterstrom, Galveston district commander of the Corps.

The Harris County Flood Control District said it expected the release to start flooding homes around the Addicks and Barker reservoirs on Monday morning.

Authorities ordered more than 50,000 people to leave parts of Fort Bend County, about 35 miles (55 km) southwest of Houston, as the Brazos River was set to crest at a record high of 59 feet (18 m) this week, 14 feet above its flood stage.

Harvey is expected to produce an additional 15 to 25 inches (38 to 63 cm) of rain through Friday in the upper Texas coast and into southwestern Louisiana, the National Hurricane Center said.

By the end of the week in some Texas coastal areas the total precipitation could reach 50 inches (127 cm), which is the average rainfall for an entire year, forecasters said. Nearly 24 inches fell in 24 hours in Baytown, a city with major refineries about 30 miles east of Houston, the weather service said early on Monday.

U.S. President Donald Trump plans to go to Texas on Tuesday to survey the storm damage, a White House spokeswoman said on Sunday. On Monday he approved an emergency declaration for Louisiana.

Almost half of the U.S. refining capacity is in the Gulf region. Shutdowns extended across the coast, including Exxon Mobil’s Baytown refinery. More than 2.3 million barrels of capacity were offline as of Monday morning, representing 13 percent of daily U.S. production.

Gasoline futures rose more than 4 percent to two-year highs on Monday morning. The outages will limit the availability of U.S. gasoline and other refined products for global consumers and push prices higher, analysts said.

The center of Harvey was 90 miles (148 km) southwest of Houston on Monday morning and forecast to arc slowly toward the city through Wednesday.

Thousands of people were rescued on Sunday by Harris County Sheriff’s Office, U.S. Coast Guard and Houston police as residents brought boats to staging centers and helicopters were deployed to save others stranded.

Federal authorities predicted it would take years to repair the damage from Harvey. The expected rain conjured memories of Tropical Storm Allison, which lingered for days over South Texas in 2001, flooding 70,000 homes and causing $9 billion in damage.

Damages are not likely to be as extensive as Katrina in 2005, which killed 1,800 people in and around New Orleans, or Sandy, which hit New York in 2012, said a spokeswoman for Hannover Re, one of the world’s largest reinsurers. Those caused $80 billion and $36 billion in insured losses, respectively.

All Houston port facilities will be closed on Monday because of the weather threat, a port spokeswoman said.

More than 247,000 customers in the Houston area were without power on Monday morning, utilities CenterPoint Energy, AEP Texas and TNMP said. CenterPoint warned, though, it could not update its figures due to limited access caused by flooding.

Jose Rengel, 47, a construction worker who lives in Galveston, helped rescue efforts in Dickinson, southeast of Houston, where he saw water cresting the tops of cars.

“I am blessed that not much has happened to me but these people lost everything,” he said.

“And it keeps raining. The water has nowhere to go.”