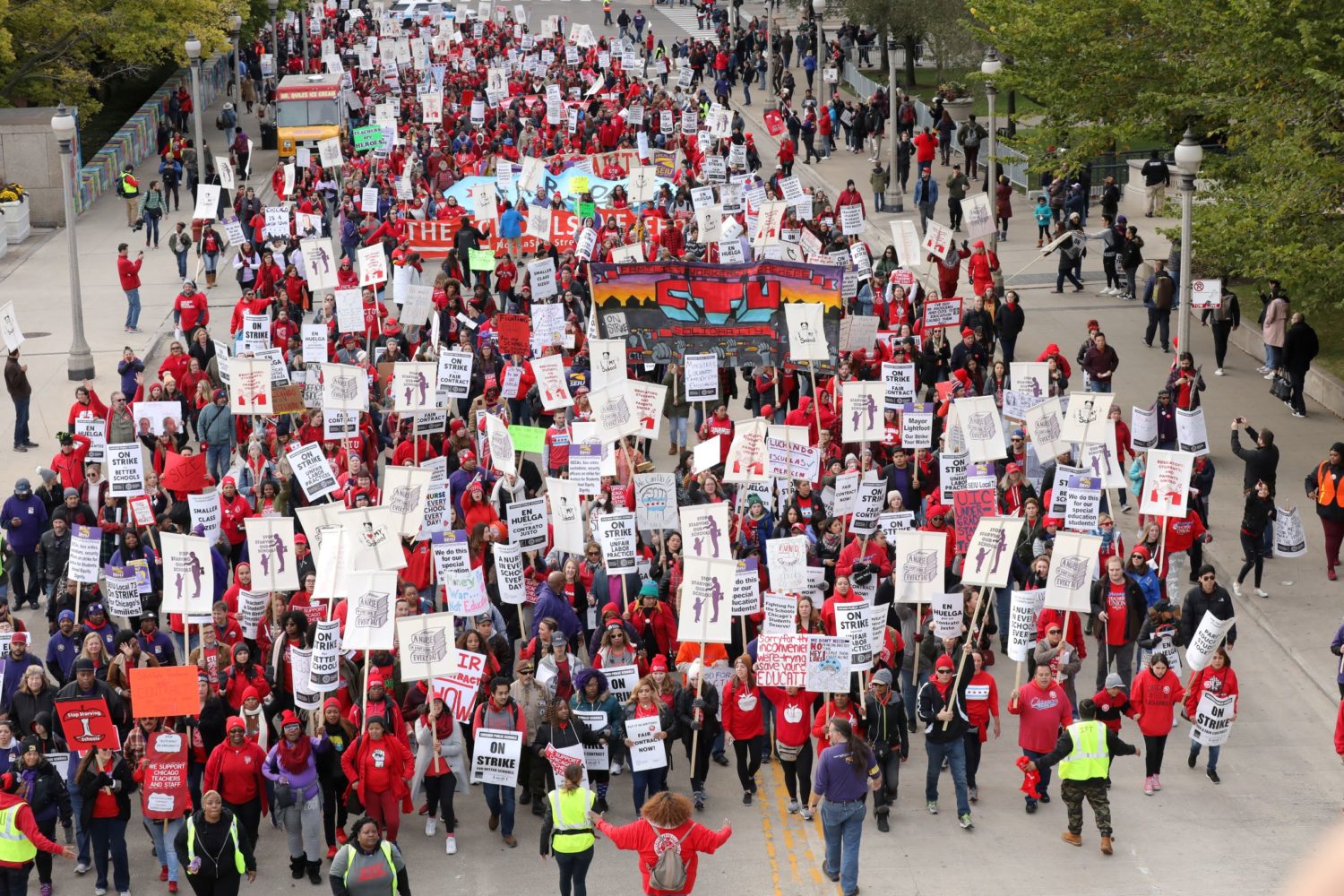 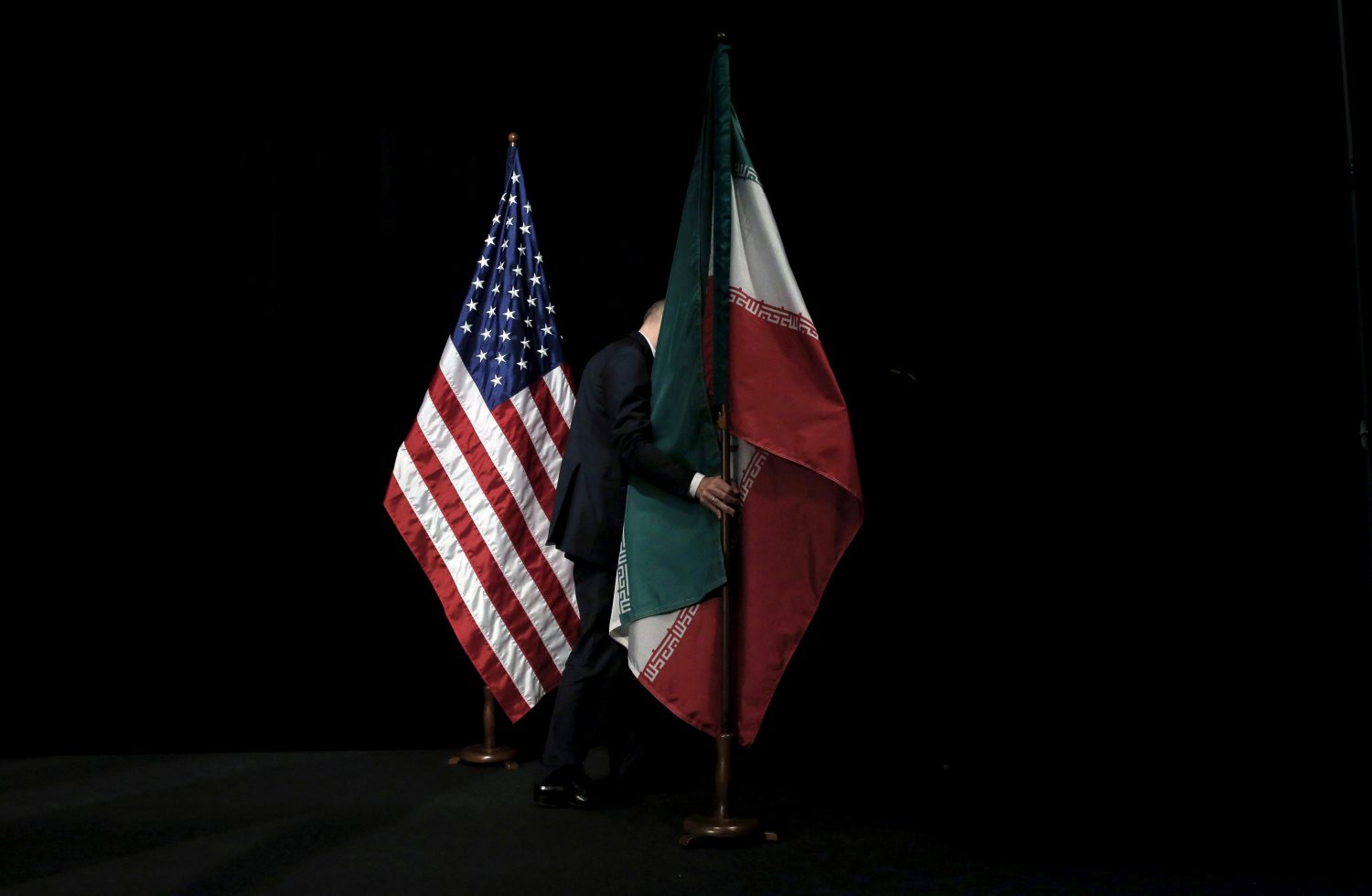 LONDON (Reuters) – Iran sees no prospect of negotiations with the United States, a foreign ministry spokesman said on Tuesday, a day after U.S. President Donald Trump said a deal with Tehran on its nuclear program was possible.

Washington withdrew last year from a 2015 international nuclear deal with Tehran, and is ratcheting up sanctions in efforts to strangle Iran’s economy by ending its international sales of crude oil.

Asked about Trump’s comments in a news conference in Tehran, Iranian Foreign Ministry spokesman Abbas Mousavi was quoted as saying by the semi-official Fars news agency: “We currently see no prospect of negotiations with America.”

“Iran pays no attention to words; What matters to us is a change of approach and behavior.”

Trump also said that United States was not looking for regime change in Iran, adding that “we are looking for no nuclear weapons.”

Iranian Vice President Eshaq Jahangiri said on Tuesday the country was not allowed to pursue the development of nuclear weapon as this was banned by Supreme Leader Ayatollah Ali Khamenei, Iran’s highest authority.

Tensions have risen between Iran and the United States since Washington deployed a carrier strike group and bombers and announced plans to deploy 1,500 troops to the Middle East, prompting fears of a conflict. 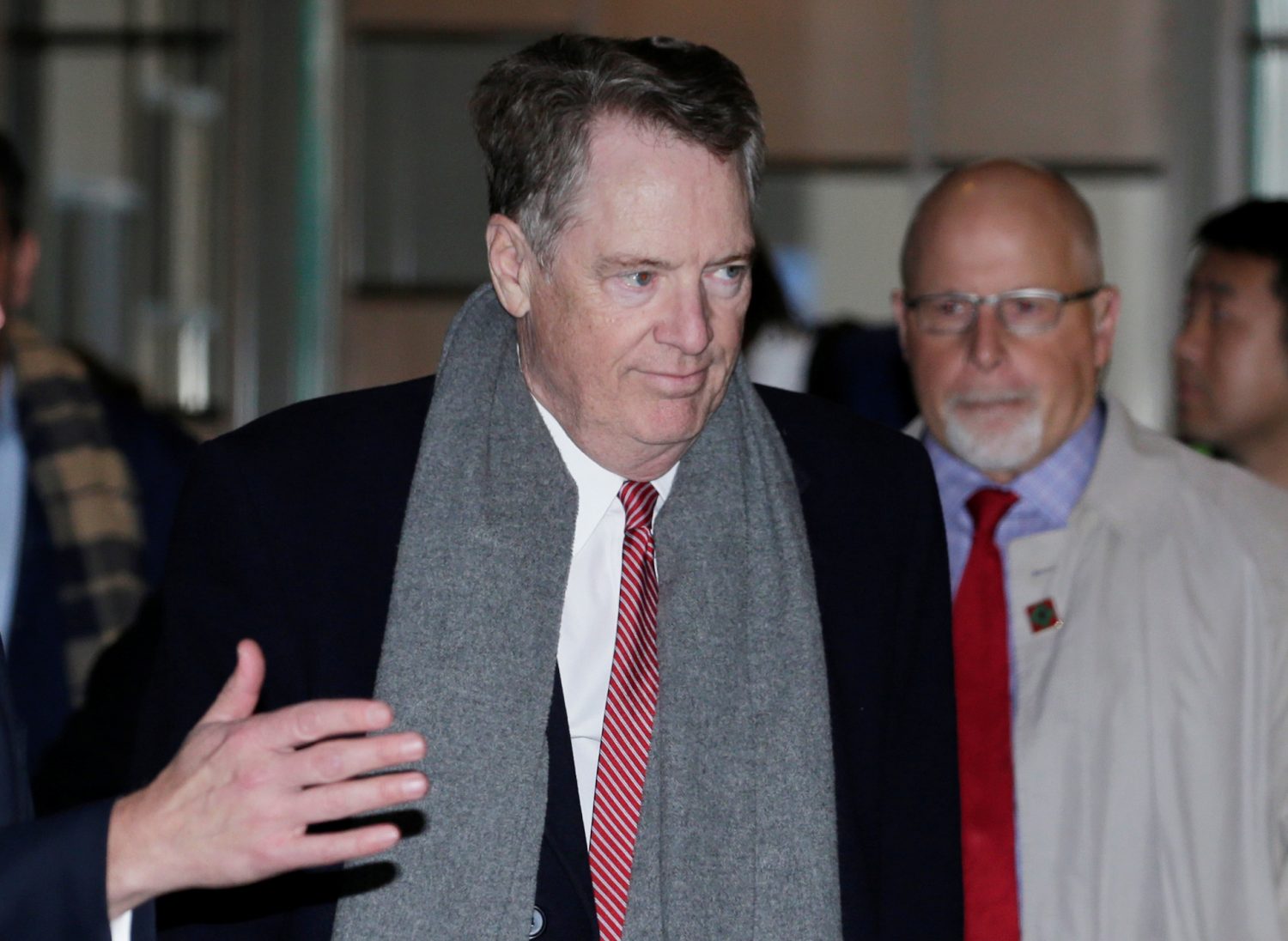 (Reuters) – U.S. Trade Representative Robert Lighthizer said on Tuesday he hopes the United States and China are in the final weeks of talks to secure a deal that will ease a trade war between the world’s two largest economies.

“Our hope is we are in the final weeks of having an agreement,” Lighthizer said at a Senate Finance Committee hearing, though he cautioned that issues remained.

“If those issues are not resolved in favor of the United States, we won’t have a deal.” 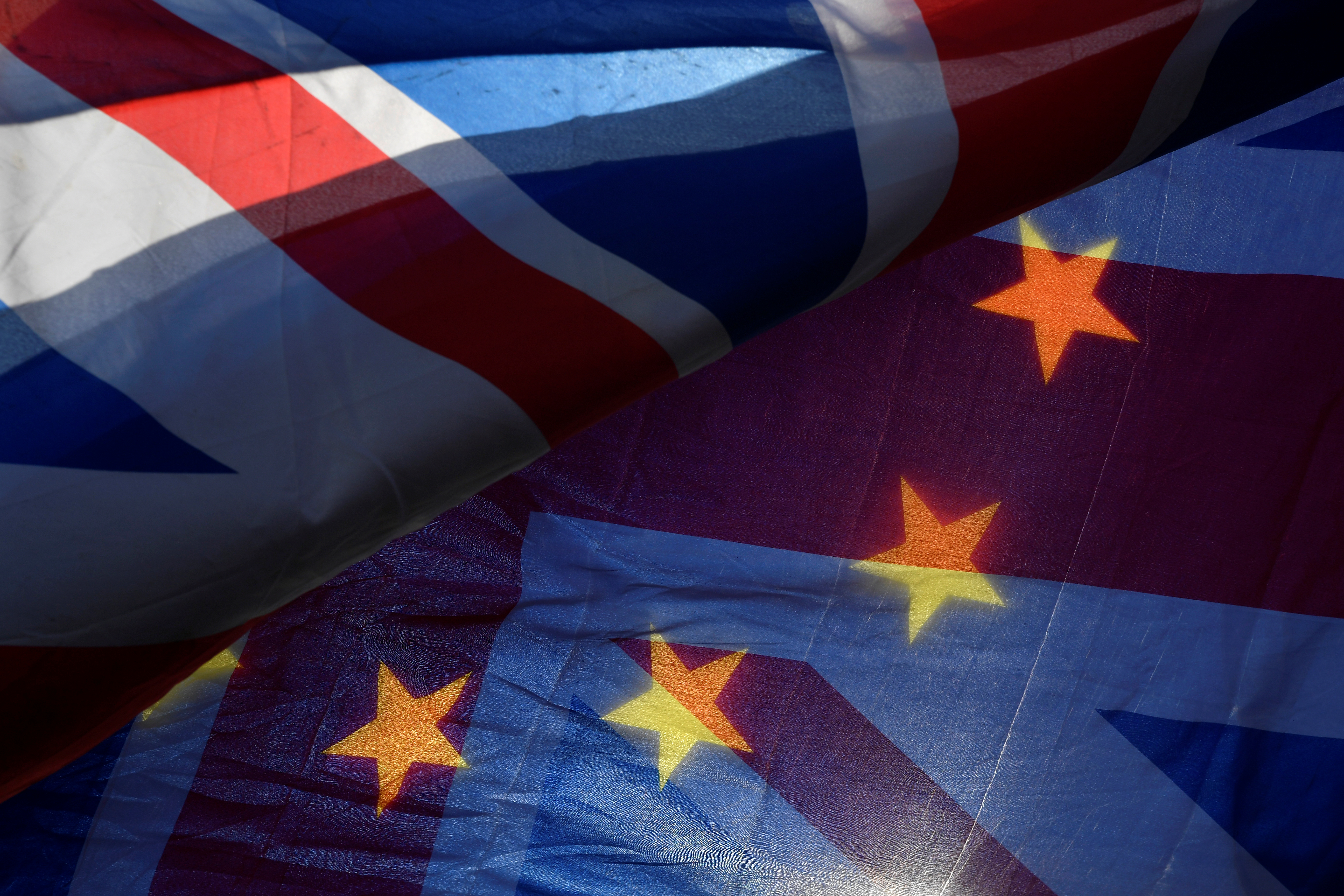 LONDON (Reuters) – The British government has removed the word “unlikely” from its official Brexit guidance telling companies and citizens how to prepare for a disorderly exit where the UK leaves the European Union without a deal.

Theresa May’s government has issued a string of technical notices in recent months with advice on what needs to be done before the country leaves the world’s largest trading bloc on March 29. They cover everything from the movement of organs, blood and sperm to nuclear regulation and organic food.

The notices had originally referred to the “unlikely” chance that Britain leaves the EU without a deal. The documents now refer to simply a “no deal scenario”.

“Delivering the deal negotiated with the EU remains the government’s top priority. This has not changed,” one notice on aviation rules says.

“However, the government must prepare for every eventuality, including a no-deal scenario.”

With just under 100 days until Britain is due to leave the EU, deep divisions in parliament have raised the chances of leaving without a deal.

May has struck an agreement with Brussels on the terms of the divorce but she was forced to pull a parliamentary vote on the proposal last week after admitting it would be defeated.

A spokeswoman for Britain’s Brexit department said the language had been updated after the government started to step up its plans for a no-deal exit.

“We fully expect to get a deal and believe that is the most likely outcome – that is what we are focused on delivering,” she said. 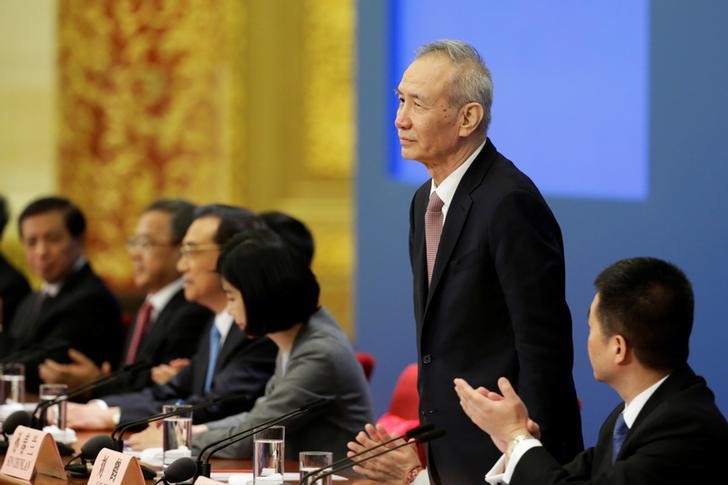 BEIJING (Reuters) – China said on Monday it is willing to work with the United States for a positive outcome in trade negotiations this week.

Foreign Ministry spokesman Lu Kang made the comment at a regular briefing.

Vice Premier Liu He will attend the talks in Washington from May 15 to 19. High-level discussions in Beijing earlier this month appeared to make little progress but there have been signs recently of some easing in tensions. 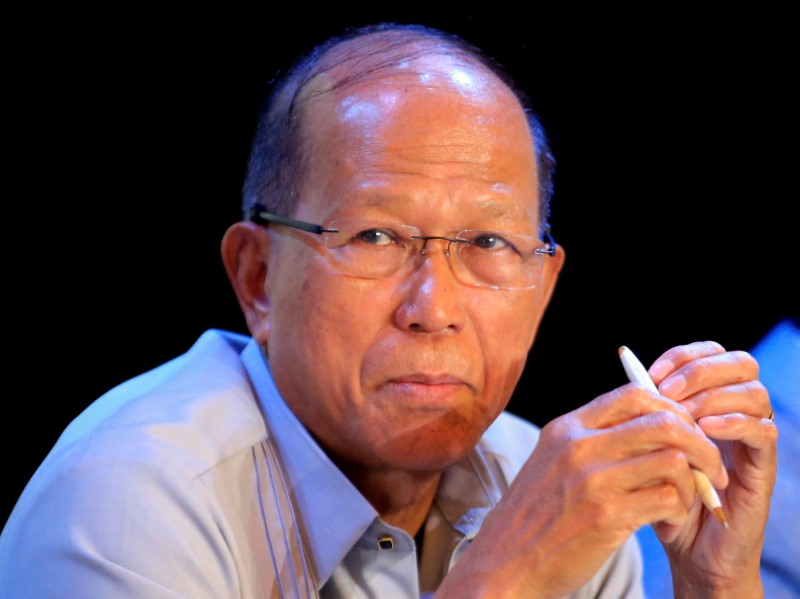 MANILA (Reuters) – The Philippines may turn to non-Western defense manufacturers, including China and Russia, to acquire 16 helicopters after it had to scrap a $233 million deal with Canada, its defense minister said on Monday.

Francois-Philippe Champagne, Canada’s trade minister, has ordered a review of the contract over concerns about Manila’s intended use for the helicopters.

“We are looking at Korea, Russia, China, Turkey and other countries for the medium-lift helicopters in lieu of the Bell 412EPI,” Philippines’ Defence Minister Delfin Lorenzana told reporters.

“We’re back to square one in the procurement process.”

It took about two years to negotiate the deal. The contract for the 16 combat utility helicopters was a repeat order, he said, after Canada delivered eight Bell 412 helicopters worth 4.8 billion pesos ($92.8 million) in 2014.

Lorenzana signed the Canadian helicopter deal last week at the Singapore Air Show last week, but Canada ordered a review after learning the aircraft would be used in anti-rebel operations.

“I think there is malice in the way it is being raised,” Lorenzana told reporters.

“It is not an attack helicopter but a medium-lift, meaning for transport of personnel and supplies. We are not asking these for free but we’re buying them. We do not have to justify how we will use these equipment.” 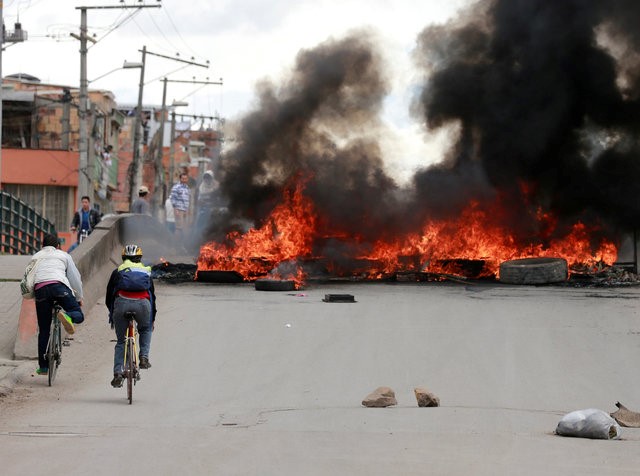 BOGOTA (Reuters) – Colombia’s government and truckers reached a deal on Friday to lift a strike that has stretched 45 days, snarling coffee exports and pushing inflation higher as foodstuff was blocked from moving around the nation.

The two sides reached agreement on cargo prices and the gradual removal of old vehicles, ending the longest and most costly strike in Colombian history, but failed to agree on toll road and fuel costs.

One person was killed during clashes, and the governor of Boyaca province was injured in a highway accident that authorities blamed on the protesters.

Trucks blocking highways were impounded, and the government said drivers or truck owners participating in violent protests would have their licenses revoked and face fines.

Coffee growers are already struggling because of a drought caused by the El Nino weather phenomenon, and are bracing for coming heavy rains, but the strike may send exports plunging by half in July, the coffee federation told Reuters recently.