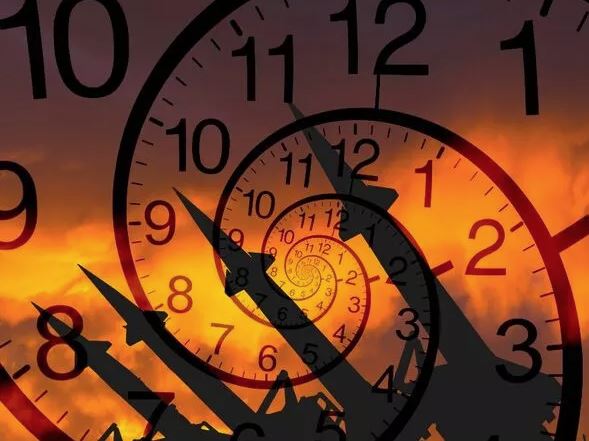 The countdown to global catastrophe remained at three minutes to midnight, scientists announced Tuesday, warning the planet was still perilously close to experiencing a disaster.

The Bulletin of the Atomic Scientists, which sets the hands of a metaphorical Doomsday Clock, announced the countdown would stay at the position it reached last year. It’s the closest the clock has been to midnight, or a catastrophic event, since the height of the Cold War in 1984.

The nonprofit determines the clock’s position after analyzing threats to human existence, particularly nuclear weapons and climate change. Only once have the hands ever been closer to midnight, a seven-year stretch during the 1950s following the world’s first hydrogen bomb tests.

In a statement, the Bulletin hailed the Iran nuclear deal and Paris Agreement on climate change, both of which were approved last year, as “major diplomatic achievements,” though said they “constitute only small bright spots in a darker world situation full of potential for catastrophe.”

The Bulletin said the Joint Comprehensive Plan of Action, the formal name for the deal that restricts Iran’s ability to develop atomic weapons, was overshadowed by rising tensions between Russia and the United States, both of whom are modernizing their nuclear arsenals, and the fact that China, Pakistan, India and North Korea are working to bolster their atomic capabilities.

The Bulletin called the Paris Agreement, a pledge signed by nearly 200 countries that aims to reduce carbon emissions and keep global temperatures from reaching long-feared levels, another important development. But the scientists noted it’s still not clear exactly how the nations will meet that goal, and the agreement was signed during the hottest year on record.

The scientists also cited ongoing conflicts in the Ukraine and Syria in their statement.

“The world situation remains highly threatening to humanity, and decisive action to reduce the danger posed by nuclear weapons and climate change is urgently required,” the Bulletin said.

The Bulletin was founded in 1945 by scientists who helped builds the world’s first atomic bomb. It established the Doomsday Clock two years later, and decides where to set its hands each year.

The clock can be moved back if the global outlook improves, and moved up if it worsens.

The closest the clock has ever been to midnight was from 1953-59, when the Bulletin said the world was only two minutes from doomsday following the hydrogen bomb tests. Conversely, the clock reached a record 17 minutes to midnight from 1991-94 after the Cold War subsided.

The clock was set at five minutes to midnight in 2012, but the Bulletin adjusted it last year because of climate change and nuclear weapons. In Tuesday’s statement, the Bulletin expressed “dismay” that world leaders had still not taken more aggressive steps to address those issues.

“When we call these dangers existential, that is exactly what we mean: They threaten the very existence of civilization and therefore should be the first order of business for leaders who care about their constituents and their countries,” the Bulletin said in its statement.

The International Campaign to Abolish Nuclear Weapons echoed those calls.

“The Bulletin’s warning should be taken seriously by world leaders,” the campaign’s executive director, Beatrice Fihn, said in a statement.“The risk of use of nuclear weapons is on the rise. If a nuclear weapon was detonated, the effects would be devastating and the international community would be unable to cope with the aftermath. The status quo is no longer an option.”