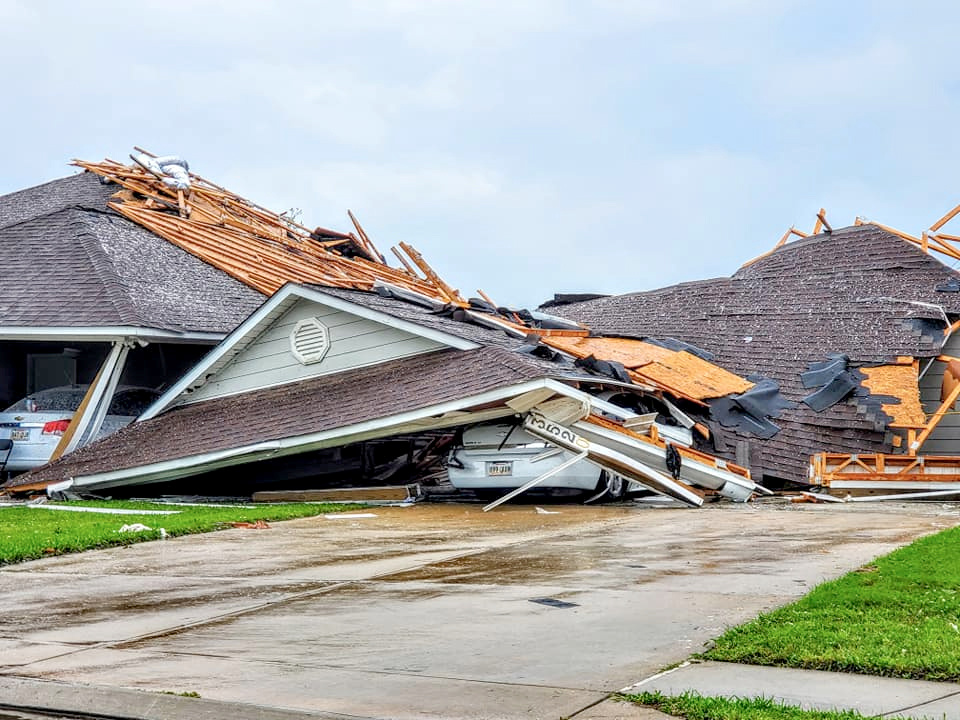 (Reuters) – At least six people were killed on Sunday as a strong storm system swept across Mississippi and Louisiana, spinning off more than a dozen tornadoes and leaving behind a path of destruction, state and local authorities said.

The storms hit on Easter Sunday as residents across the U.S. South, like most Americans, were under strict “stay-at-home” orders by the governors of Mississippi and Louisiana due to the nationwide coronavirus pandemic. 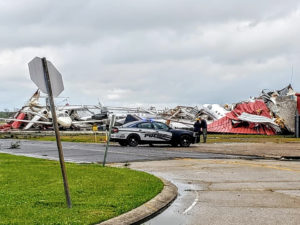 Damaged planes and buildings are seen in the aftermath of a tornado in Monroe, Louisiana, U.S. April 12, 2020, in this still image obtained from social media. Courtesy of Peter Tuberville/Social Media via REUTERS.

All six fatalities were recorded in Mississippi, the state’s emergency management agency said on Twitter, and tornado warnings remained in place across several counties into the evening.

The National Weather Service said 13 tornadoes were believed to have touched down across the region.

The city of Monroe, Louisiana, posted photos of wrecked buildings on social media and said that Monroe Regional Airport had canceled all flights until further notice due to debris on the runway and weather conditions.

“By the grace of God, early reports show only a few minor injuries. Pray for our city! Many neighbors & friends suffered catastrophic damage,” Monroe Mayor Jamie Mayo said on Twitter.

Tornado warnings were also issued for parts of Texas into Sunday night. 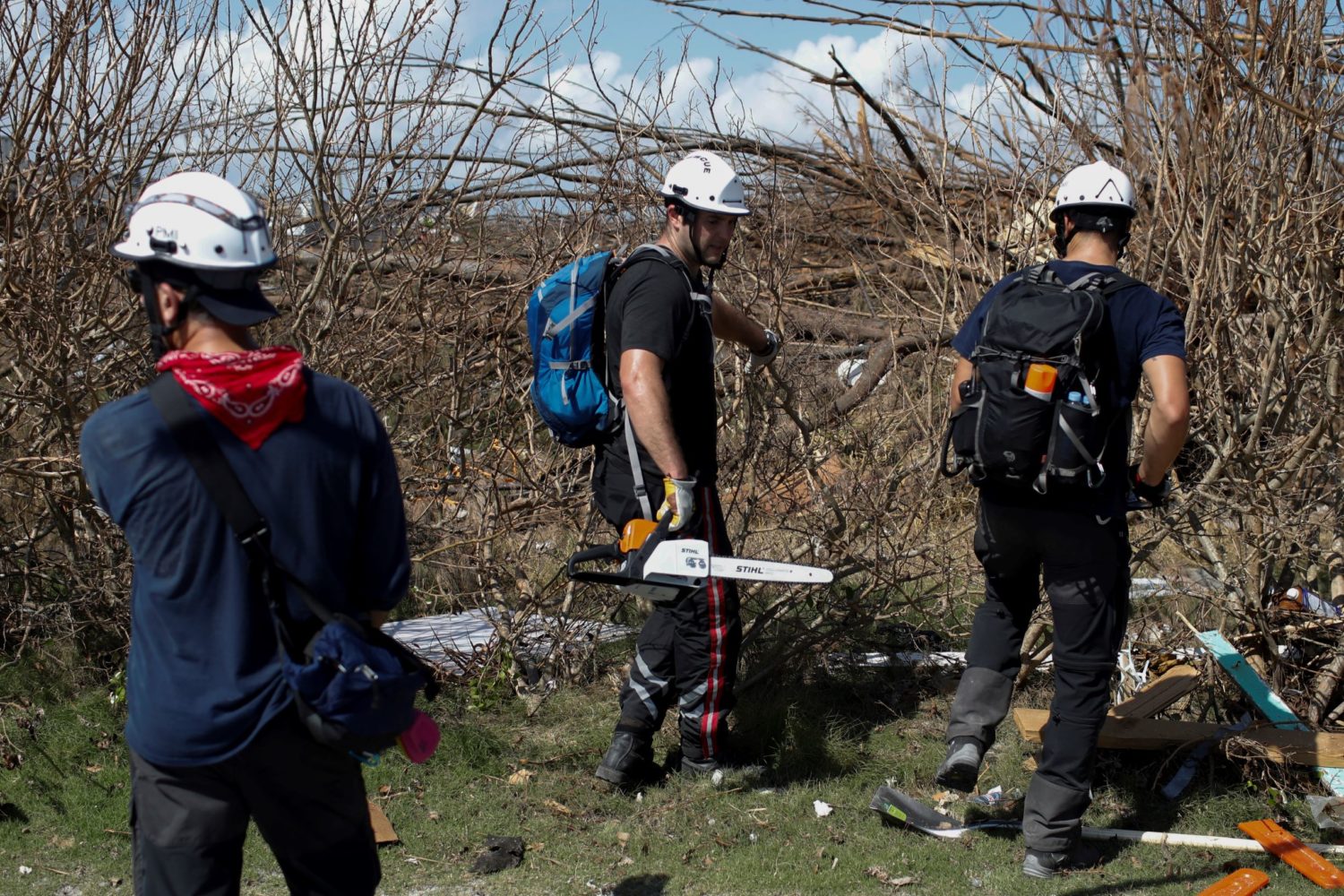 NASSAU, Bahamas (Reuters) – Some 2,500 people are still listed as missing in the Bahamas more than a week after Hurricane Dorian pummeled the Caribbean island chain, although that number may include evacuees who fled to shelters, authorities said on Wednesday.

Bahamian Prime Minister Hubert Minnis told the nation in a televised address that the death toll from Dorian remained at 50, but conceded that the large number of people missing meant that number would rise.

“The number of deaths is expected to significantly increase,” Minnis said, adding the government was being transparent and would provide “timely information on the loss of life as it is available.”

Emergency management officials told a separate news conference that the list of missing had not yet been checked against records of evacuees or the thousands of people staying in shelters.

“My friends are missing, a few of my cousins are missing over there, five in total, they lived in Marsh Harbour,” said Clara Bain, a 38-year-old tour guide, referring to the Abaco town where officials estimate that 90% of homes and buildings were damaged or destroyed.

“Everyone on the islands are missing someone, it’s really devastating,” she said.

Dorian slammed into the Bahamas on Sept. 1 as a Category 5 storm on the five-step Saffir-Simpson scale of intensity, one of the strongest Atlantic hurricanes on record to make a direct hit on land and packing top sustained winds of 185 miles per hour (298 kph).

“Our sympathies go out to the families of each person who died,” Minnis said. “Let us pray for them during this time of grief. We offer you our shoulders to cry on. You will never be forgotten.”

More than 5,000 people evacuated to New Providence, the island where the capital, Nassau, is located, in the face of the worst hurricane in the country’s history. But there has since been a significant reduction in the number now asking to be relocated, according to emergency management officials.

Some 15,000 people are still in need of shelter or food, according to the Caribbean Disaster Emergency Management Agency.

Officials have already put up large tents in Nassau to house those made homeless by the storm and plan to erect tent cities on Abaco capable of sheltering up to 4,000 people.

Minnis thanked U.S. President Donald Trump and the American people for mobilizing support and urged Bahamians to pitch in with relief efforts by volunteering or donating money to legitimate charities.

The White House said on Wednesday the United States would not give temporary protected immigration status to people fleeing the Bahamas after the hurricane.

The status would have allowed Bahamians to live and work in the United States while their country recovers.

Private forecasters estimated that Dorian destroyed or damaged some $3 billion in insured property in the Bahamas or elsewhere in the Caribbean.

Commercial flights to Abaco, one of the hardest-hit areas, resumed on a limited basis on Wednesday. 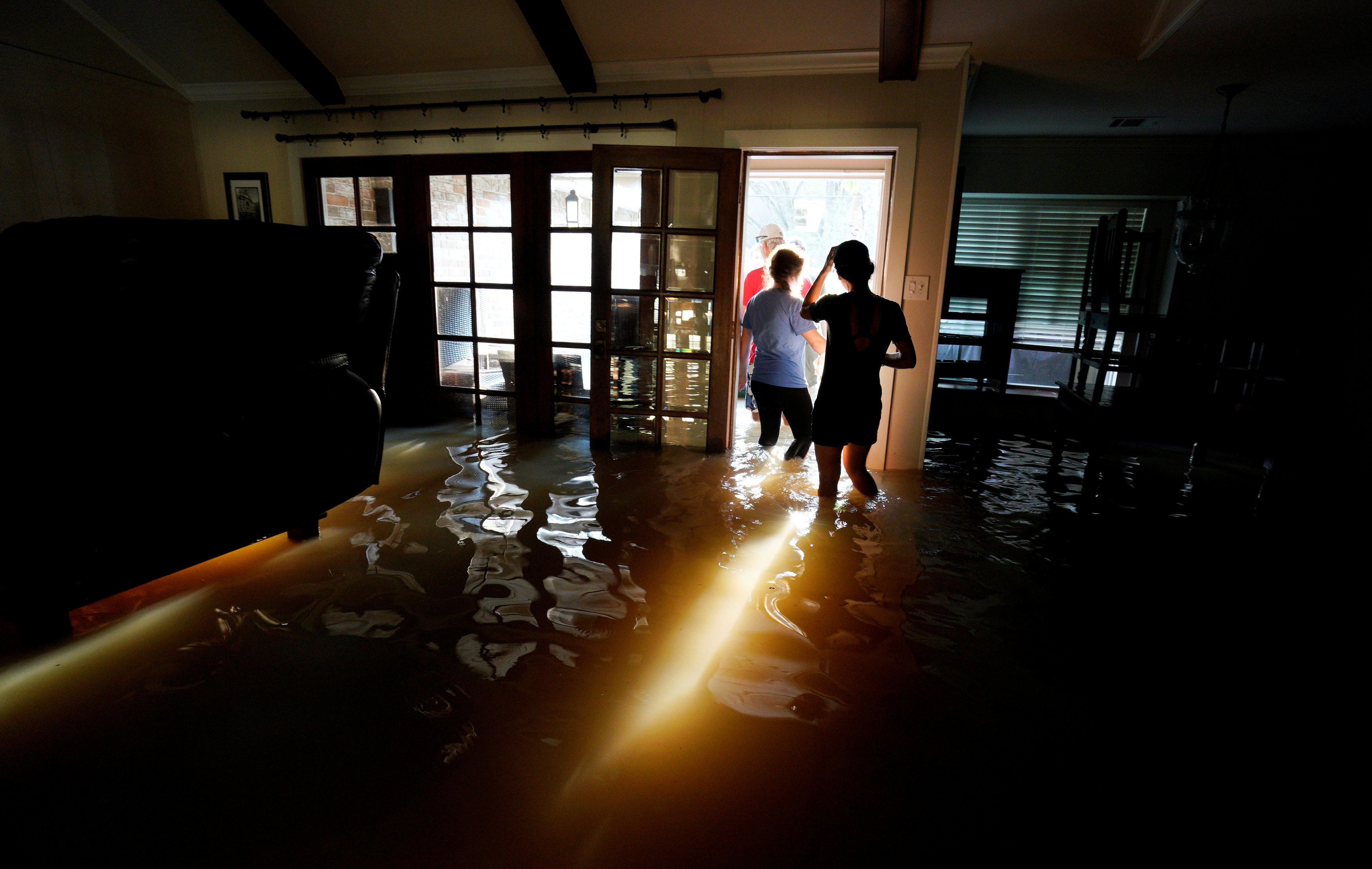 Speaking on CBS’ Face the Nation, Long said the federal support is intended to be a “ray of hope, a bridge to kick-start recovery,” and state and local governments need to do more on their own. They should not expect the federal government to make their citizens whole after major disasters, he said.

“We need elected officials at all levels to sit down and hit the reset button and make sure they have everything they need to increase levels of self-sufficiency,” Long said.

He called the massive devastation “a wakeup call for local and state officials,” saying they needed to fully fund their own emergency management offices and have rainy day funds set aside for such emergencies. “They can’t depend only on federal emergency management,” he said following pointed calls by Houston officials for FEMA to quickly increase staffing in the city and provide relief funds.

Long declined to offer an amount the White House would request Congress to provide for additional emergency assistance in the wake of Harvey. Earlier Texas Governor Greg Abbott said the cost of the storm had risen to between $150 billion and $180 billion.

Houston is making progress on several fronts to recover from Harvey, resuming city services and helping get people into housing and out of emergency shelters, Houston Mayor Sylvester Turner said in separate comments on Face the Nation on Sunday.

“This is a can-do city. We’re not going to engage in a pity party,” said Turner. “People are taking care of each other.” Speaking from the city’s convention center, which once housed 10,000 people fleeing from flooding, he said there are “significantly less than 2,000” people now staying at the shelter. 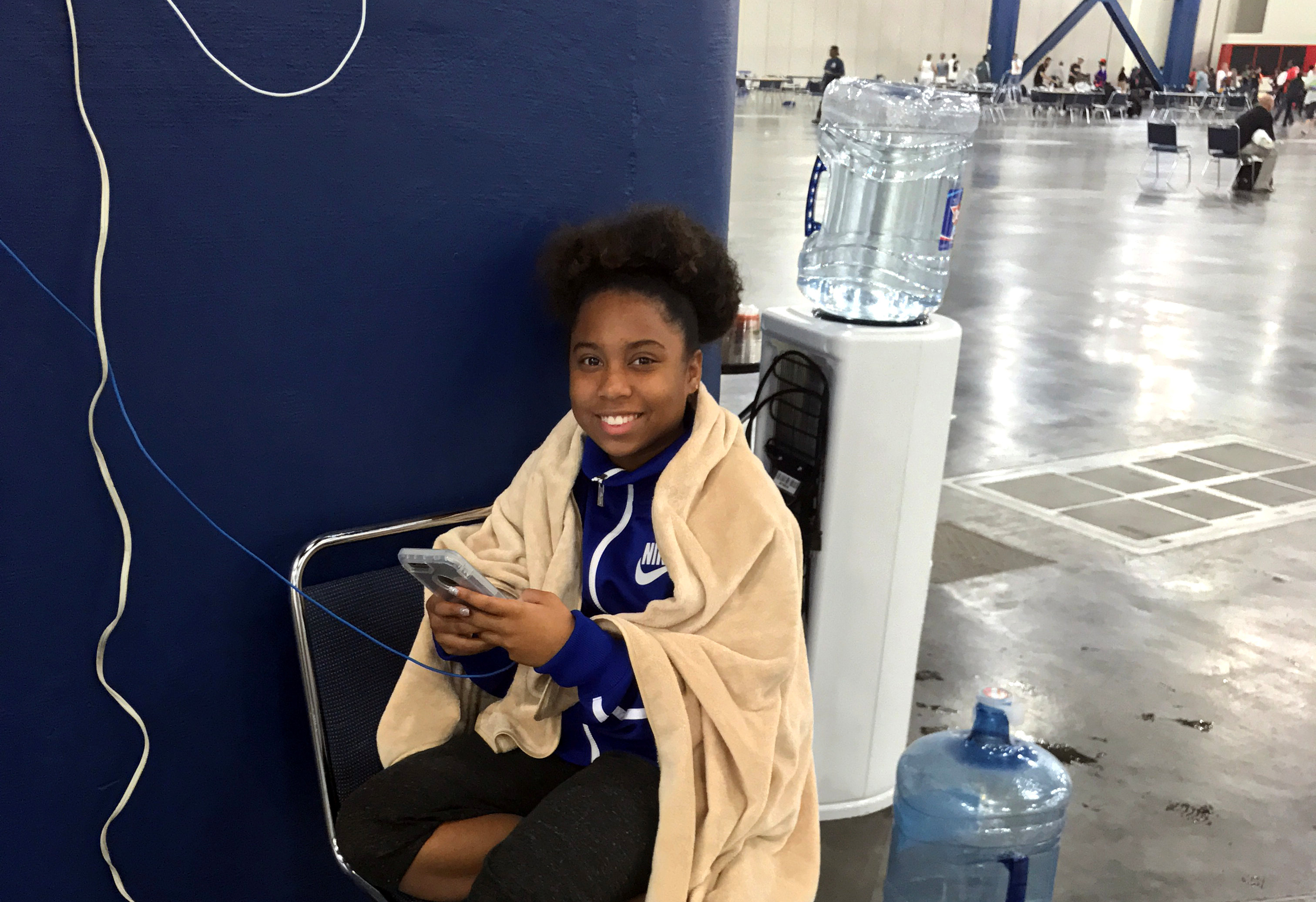 HOUSTON (Reuters) – Houston’s Nine-year old Melody Rodriguez saw a snake swimming toward her through the floodwaters. Reginald James Jones, Jr., also nine, had to climb into the attic to escape water up to the roof.

His sister, seven-year-old Ta’lilia Smithers had screamed that her family would die as the water rose quickly in their home.

These children and others who were rescued on Sunday and ferried on city dump trucks to Houston’s George R. Brown Convention Center also brought wonder and resilience to their perspective on the torrential rains from Hurricane Harvey that drowned their homes.

Their fascination after witnessing the power of nature escaped their beleaguered parents in the cavernous hall.

Being up in that attic was “fun,” Reginald said.

“It was a really big attic,” he said. “The attic kept us calm. I could see everything from up there – all the flooding. And I could see downtown.”

His little sister, 5-year-old Jakayla Taylor, marveled at how the “whole city was flooded – like a beach.”

Ta’lilia found took comfort in knowing she would probably get “a whole week off of school.”

“But momma says she can’t wait for us to go back to school, so she can have her eight hours of peace,” she added.

Late Sunday evening, Melody had recovered from the snake scare of that morning and reveled in the retelling. The people at the shelter, she said, were just so nice.

“They gave us pizza, lasagna, hot dogs, potato chips – and they also gave me these shoes,” she said, showing off her new purple rubber kicks. “Oh, and this hand sanitizer.”

Melody’s mother, who had five more children with her between the ages of 4 and 15, smiled as she watched her daughter excitedly tell flood stories and play with stuffed animals the Red Cross gave out.

As far as storm shelters go, this one was well-staffed and comfortable – a world away from the nightmarish scene at the ad hoc shelter at New Orleans’ convention center 12 years ago during Hurricane Katrina.

Houston’s experience with Harvey has drawn comparisons with the disaster that hit New Orleans, but there are many contrasts.

Nearly all of Houston’s downtown, for instance, appeared to have power Sunday night, along with many other areas of the city. Unlike New Orleans, Houston did not suffer a catastrophic wind storm before the flooding began, nor the massive levee failures that let in all the water at once.

Emergency management officials and the Red Cross had more time to organize shelters in Houston as Harvey first pounded coastal cities further south along the Texas coast, including Rockport.

Melody’s mom, 37-year-old Aeisha Brimzy, said her family’s every need had been handled since they arrived.

“It has been like all of us coming together,” she said of the flood victims at the convention center. “It’s been so peaceful. They have been feeding us all day, giving the kids snacks. The volunteers and the Red Cross and the police, they are really doing their job.”

Just then, a voice over the loudspeaker said: “If you need dry clothes, go to your cot. We are handing out fresh, dry clothes.”

A few yards away, people gathered around a big-screen TV taking in the latest storm news.

A volunteer came by to offer the kids more hot dogs. The youngsters said they were already full.

Earlier in the day, the children had suffered a harrowing trauma.

“Momma, is it going to get higher? I can’t swim,” Brimzy recalled one of her six-year-old twins, Carolina, saying as the water from Buffalo Bayou rushed into their apartment in Clayton Homes, a public housing development on the east side of downtown.

Melody showed a mix of sadness at some of her losses and bewilderment at what she had witnessed.

“My back pack is gone. I lost two tablets and some other very valuable stuff,” she said, referring to her Apple iPads. “And two pairs of name-brand shoes.”

“Our table, it was floating in the water! It was so high that our couch was floating around. But momma’s vases just sank,” Melody said.

Another daughter, 13-year Leeanta Rodriguez, had spent the night before tossing and turning in bed.

“I couldn’t sleep, because I knew that bayou was going to come up,” she said.

Sure enough it did, at about dawn. She carried her sister, Carolina, out of the flood and to the rescue trucks on her back.

Now at the shelter in the late evening, Leeanta worried about more practical things, like whether she would have to change schools, which she didn’t want to do. She said she loved her friends and her basketball team at Pershing Middle School.

Across the big room where they gathered, seven-year-old Ta’lilia worried about her school, too. She believed it had flooded like her house. The school is located in South Houston near a Bray’s Bayou.