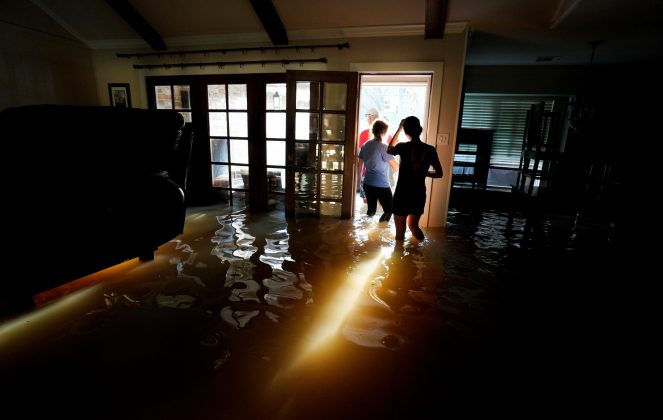 A family that wanted to remain anonymous moves belongings from their home flooded by Harvey in Houston, Texas August 31, 2017. REUTERS/Rick Wilking

Speaking on CBS’ Face the Nation, Long said the federal support is intended to be a “ray of hope, a bridge to kick-start recovery,” and state and local governments need to do more on their own. They should not expect the federal government to make their citizens whole after major disasters, he said.

“We need elected officials at all levels to sit down and hit the reset button and make sure they have everything they need to increase levels of self-sufficiency,” Long said.

He called the massive devastation “a wakeup call for local and state officials,” saying they needed to fully fund their own emergency management offices and have rainy day funds set aside for such emergencies. “They can’t depend only on federal emergency management,” he said following pointed calls by Houston officials for FEMA to quickly increase staffing in the city and provide relief funds.

Long declined to offer an amount the White House would request Congress to provide for additional emergency assistance in the wake of Harvey. Earlier Texas Governor Greg Abbott said the cost of the storm had risen to between $150 billion and $180 billion.

Houston is making progress on several fronts to recover from Harvey, resuming city services and helping get people into housing and out of emergency shelters, Houston Mayor Sylvester Turner said in separate comments on Face the Nation on Sunday.

“This is a can-do city. We’re not going to engage in a pity party,” said Turner. “People are taking care of each other.” Speaking from the city’s convention center, which once housed 10,000 people fleeing from flooding, he said there are “significantly less than 2,000” people now staying at the shelter.