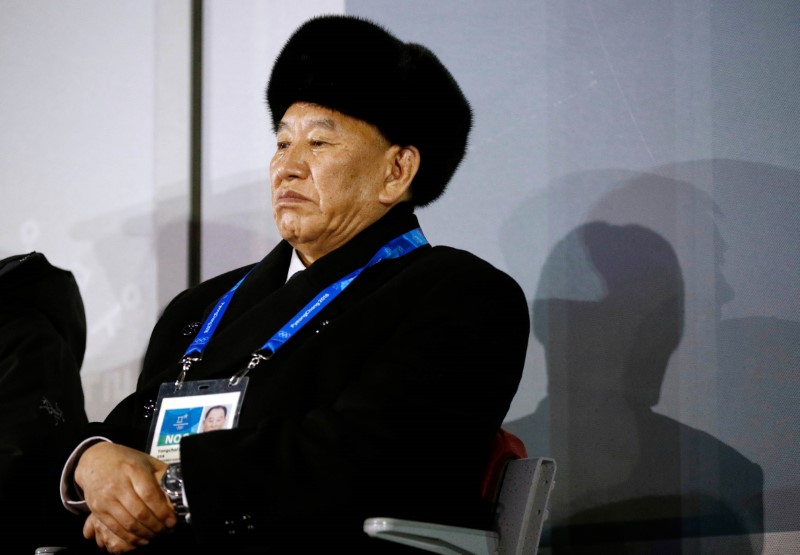 By Doina Chiacu and Hyonhee Shin

WASHINGTON/SEOUL (Reuters) – When Kim Yong Chol lands in New York this week, he will become the most senior North Korean envoy to hold talks with American officials on U.S. soil in 18 years.

The former spy chief is a trusted adviser to North Korean leader Kim Jong Un, playing a pivotal role in preparations for an historic summit between Kim and U.S. President Donald Trump.

In a sign of his importance, Trump announced Kim Yong Chol’s New York trip on Twitter on Tuesday.

The White House said he would meet U.S. Secretary of State Mike Pompeo later this week, the most high-level contact between the two countries in the United States since Jo Myong Rok, a marshal, met President Bill Clinton in 2000.

Kim Yong Chol is a four-star general, vice chairman of the ruling Workers’ Party’s Central Committee, and director of the United Front Department, which is responsible for inter-Korean relations.

Such positions, and his omnipresence before and during inter-Korean summits in April and on Saturday, make him one of the most powerful people in North Korea, South Korean officials say.

He has played a central role in the recent thaw in relations between the North and South Korea, as well as the United States.

Sent as Kim Jong Un’s envoy to the Winter Olympics in South Korea in February, Kim Yong Chol told South Korean President Moon Jae-in Pyongyang was open to talks with Washington, the first indication North Korea was changing course after months of trading threats and insults with the United States.

He and Kim Jong Un’s sister, Kim Yo Jong, were the only two officials to join the North Korean leader at the two inter-Korean summits. 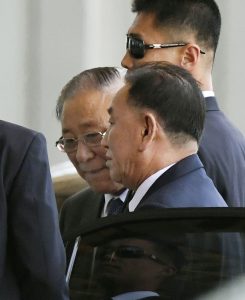 Kim Yong Chol was previously chief of the Reconnaissance General Bureau, a top North Korean military intelligence agency, and has spent nearly 30 years as a senior member of the intelligence community.

The United States and South Korea blacklisted him for supporting the North’s nuclear and missile programs in 2010 and 2016, respectively. A visit to the United States would indicate a waiver was granted.

He was accused by South Korea of masterminding deadly attacks on a South Korean navy ship and an island in 2010. He was also linked by U.S. intelligence to a devastating cyber attack on Sony Pictures in 2014.

North Korea denied any involvement in either incident.

Kim Yong Chol “stormed out of the room” during military talks in 2014 when the South demanded an apology for the 2010 attacks, according to South Korean officials.

“He is a tough negotiator and an expert on inter-Korean talks, but it is true that he had been a symbol of hawks rather than harmony and reconciliation until this year,” said Moon Sang-gyun, a former South Korean defense official.

Kim Yong Chol served in the military police in the demilitarized zone on the border of the two Koreas. He was also a bodyguard to Kim Jong Il, the former leader and late father of Kim Jong Un, according to North Korea Leadership Watch, an affiliate of the 38 North think tank.

He has been closely linked to Kim Jong Un’s succession and has been seen flanking the leader on several public visits.

Kim Yong Chol is known to be difficult to work with, sarcastic and not sufficiently deferential to his superiors, Leadership Watch said.

He has also suffered tough times. South Korea’s intelligence agency said in 2015 Kim Yong Chol was demoted to a three-star general after dozing off during a meeting.

In 2016, Seoul’s unification ministry said he was briefly sent to a re-education camp for his “overbearing” manner and abuse of power.

(Reporting by Doina Chiacu in WASHINGTON and Hyonhee Shin in SEOUL; Editing by Mary Milliken, Bill Trott and) 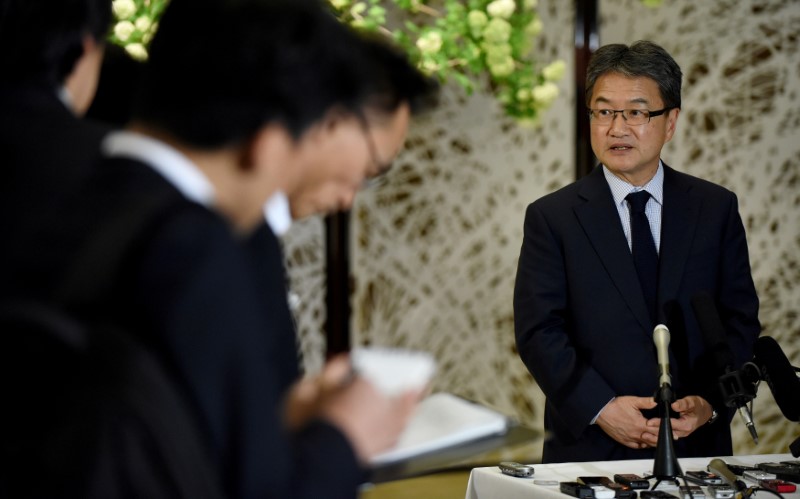 WASHINGTON (Reuters) – The U.S. envoy for North Korea will travel to Japan and Thailand next week to discuss how to increase pressure on Pyongyang after its latest ballistic missile test, the U.S. State Department said on Friday.

“The United States looks forward to continuing its partnership with both these nations so that the DPRK will return to credible talks on denuclearization,” it added.

Tensions have risen markedly in recent months over North Korea’s development, in defiance of repeated rounds of U.N. sanctions, of nuclear-tipped missiles capable of reaching the United States.

Last week’s missile test prompted a U.S. warning that North Korea’s leadership would be “utterly destroyed” if war were to break out. The Pentagon has mounted repeated shows of force after North Korean tests.

The United States has sent mixed signals about its interest in talks with the North, with Secretary of State Rex Tillerson saying that Washington was pursuing such contacts but President Trump tweeting that this was a waste of time. 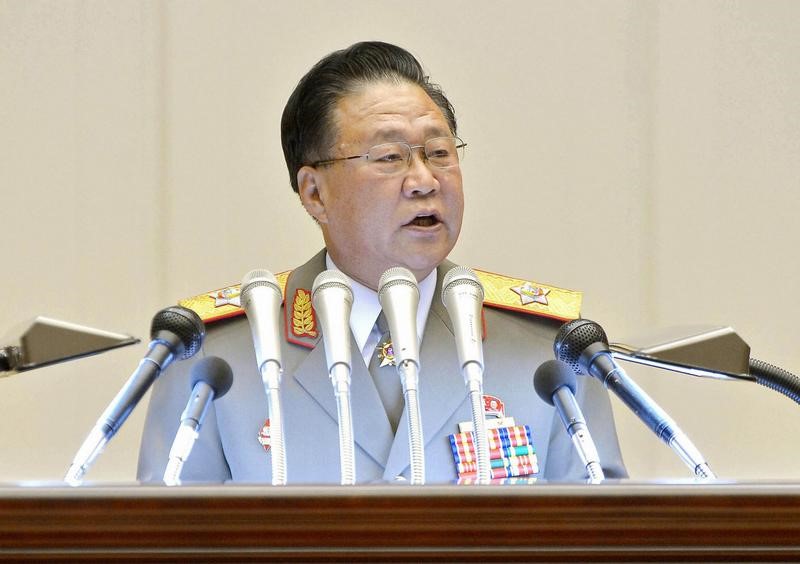 BEIJING/SEOUL (Reuters) – Traditional friendship between China and North Korea represents “valuable wealth” for their people, China said after its special envoy met a high-ranking North Korean official, but there was no mention of the crisis over North Korea’s weapons.

Song Tao, who heads the ruling Chinese Communist Party’s international department, is visiting Pyongyang to discuss the outcome of the recently concluded Communist Party Congress in China, at which President Xi Jinping cemented his power.

In a brief statement dated Friday but reported by Chinese media on Saturday, the international department said Song, who is there representing Xi, reported to North Korean official Choe Ryong Hae the outcome of the congress.

Song and Choe also talked about relations between their parties and countries, the department said.

“They said that the traditional friendship between China and North Korea was founded and cultivated by both countries former old leaders, and is valuable wealth for the two peoples,” it said.

“Both sides must work hard together to promote the further development of relations between the two parties and two countries to benefit their two peoples.”

The department made no mention of North Korea’s nuclear or missile programs, which are strongly opposed by China.

Song arrived on Friday but it is not clear how long he will be in North Korea.

China has repeatedly pushed for a diplomatic solution to the crisis over North Korea’s development of nuclear weapons and missiles to carry them, but in recent months it has had only limited high-level exchanges with North Korea.

Song’s trip comes just a week after U.S. President Donald Trump visited Beijing as part of an Asia tour, where he pressed for greater action to rein in North Korea, especially from China, with which North Korea does 90 percent of its trade.

The influential state-run Chinese tabloid the Global Times said in an editorial that it was unwise to expect too much from his trip, saying his key mission was to inform North Korea about the party congress in Beijing.

“Song is not a magician,” the newspaper said.

“The key to easing the situation on the peninsula lies in the hands of Washington and Pyongyang. If both sides insist on their own logic and refuse to move in the same direction, even if Song opens a door for talks, the door could be closed any time.”

It is not clear whether Song will meet North Korea’s youthful leader Kim Jong Un.

Kim and President Xi exchanged messages of congratulations and thanks over the Chinese party congress, but neither leader has visited the other’s country since assuming power.

Song’s department is in charge of the party’s relations with foreign political parties, and has traditionally served as a conduit for Chinese diplomacy with North Korea.

China’s new special envoy for North Korea, Kong Xuanyou, who took up his position in August, is not believed to have visited the country since assuming the job.