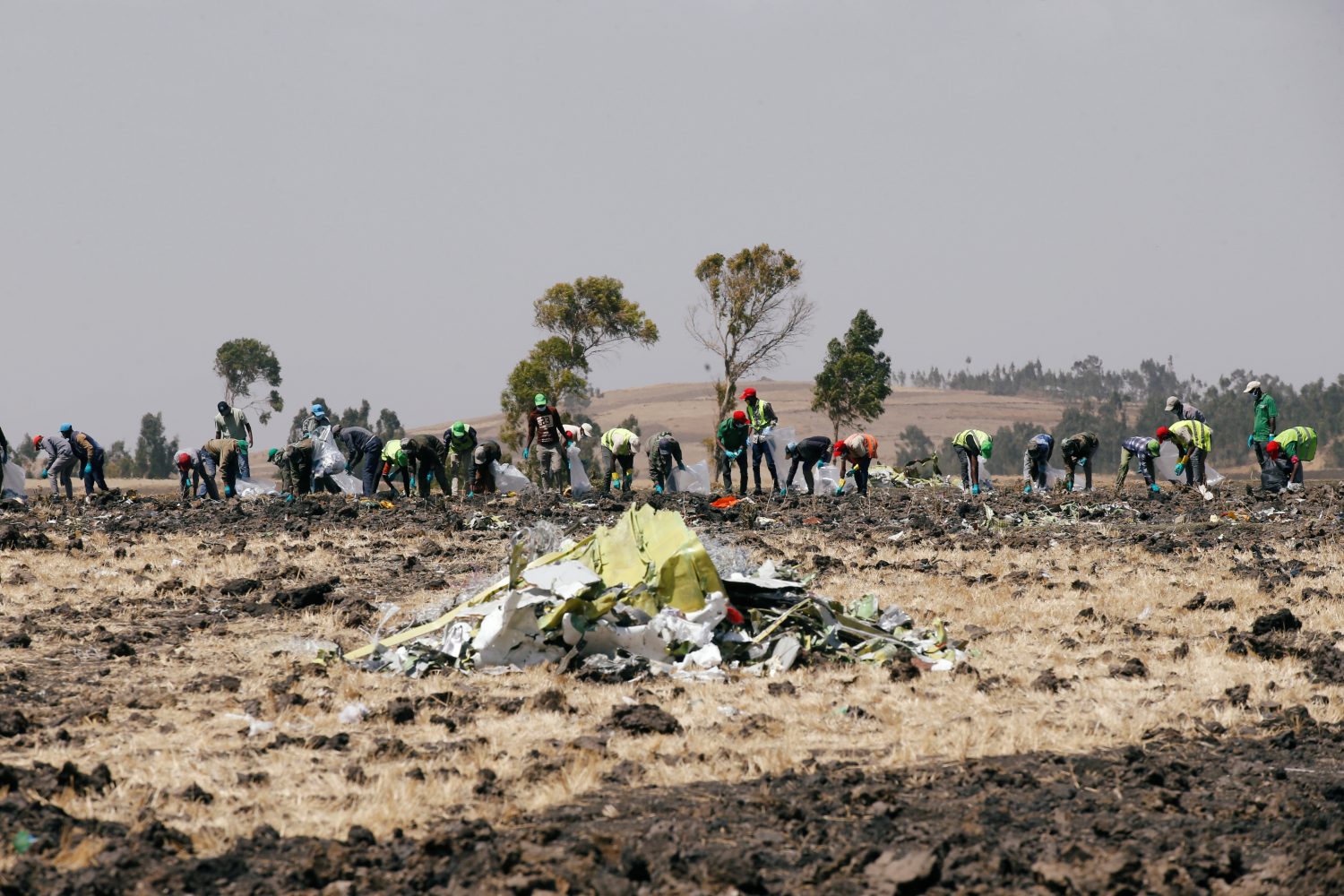 Body parts and personal effects were still strewn across the crash site of Ethiopian Airlines Flight 302 on March 15, a witness told Reuters, five days after the disaster and the day before recovery efforts were halted.

With the site now fenced off, bereaved families are worried the remains of their loved ones may be left at the scene, compounding their anguish.

Citizens of 35 nations were aboard when the Boeing 737 MAX 8 jet nosedived into a field on March 10 six minutes after take-off from Addis Ababa, killing all 157 people onboard.

Families of those who perished complain of a lack of information about recovery efforts, which saw Ethiopian workers using metal parts of the aircraft to dig in the soil.

Religions such as Islam and Judaism require quick burials, but authorities said last week that identifying remains – many burned or in small pieces – might take six months.

“At the beginning, (the Ethiopian authorities) should have blocked off that place and sent an organized team to search, instead of just leaving it open. I’m unhappy about that. It’s supposed to be easier if it’s in the government’s hands,” said Milka Yimam, a dual Ethiopia-Israeli citizen whose 26-year-old son Sidrak died.

Relatives of the victims who visited the site on Monday said it had been cordoned off and the ground leveled, apart from the impact crater. The dead included a grand-niece of consumer advocate and former U.S. presidential candidate Ralph Nader.

“Excavation has ended for the moment since we have got everything we think we need at the moment. The site has been enclosed and can be revisited,” he said on Friday.

Global attention has mostly shifted to an investigation into the cause of the disaster, and similarities with the crash of a Lion Air 737 MAX plane in Indonesia last October that killed 189 people. Pilots of both aircraft reported control problems and crashed minutes after take-off.

The world’s entire 737 MAX fleet was grounded after the Ethiopia crash, with Boeing losing about 12 percent – or $28 billion – of its market value since the disaster.

But as headlines focus on the investigation and its financial fallout, families fear the spotlight has shifted from recovery efforts.

Israelis whose bodies are not recovered are officially listed at home as “disappeared” rather than “dead” – a status that can cause complications for relatives in matters ranging from inheritance to remarrying.

Some Jewish traditions also require a piece of the body be buried before mourning can begin, with the soul not able to rest until then, giving the families’ quest an agonizing urgency.

So the Israeli embassy has been working hard to retrieve the remains of its two citizens who died in the crash, families told Reuters.

But it hasn’t been easy. After being bounced between various government ministries, the ambassador eventually wrote to the airline to get access to the crash site, a source familiar with matter said. He got no reply – until the Israeli prime minister intervened by phoning his Ethiopian counterpart.

The ambassador and representatives of Israeli volunteer rescue and recovery organization ZAKA were finally able to access the site last Friday. They have not been allowed back.

The embassy said on Thursday ZAKA had been told it could not return to retrieve remains due to a “procedural matter” and that Ethiopia did not want to grant access for other nations.

The Ethiopian ministries of transport and foreign affairs did not respond to a request for comment.

An Interpol-led group of nations including Germany and Canada are supporting the DNA testing, three Addis Ababa-based diplomatic sources said. Ethiopia has also contracted British firm Blake Emergency Services to recover and return the remains. The firm did not respond to requests for comment.

Remains recovered so far have been bagged and stored in an out-of-the-way area of Addis Ababa’s Bole airport, in refrigeration units usually used to store roses destined for export, before being moved to the capital’s St. Paul’s Hospital, two sources told Reuters.

Halting excavations could complicate matters for many countries, some of which are still unsure how many of their citizens were lost.

Although 18 of the victims have been identified as Canadian, others had connections to Canada, meaning its embassy has been supporting more families, said Canada&rsquo;s ambassador to Ethiopia, Antoine Chevrier. Some were also dual nationals.

Ethiopian Airlines has not published the full passenger list with names and dates of birth. It did not respond to questions over when the list might be published.

Until that is done, confusion remains over dual nationals, and the citizenship of seven people onboard the flight is still not public, diplomats told Reuters.