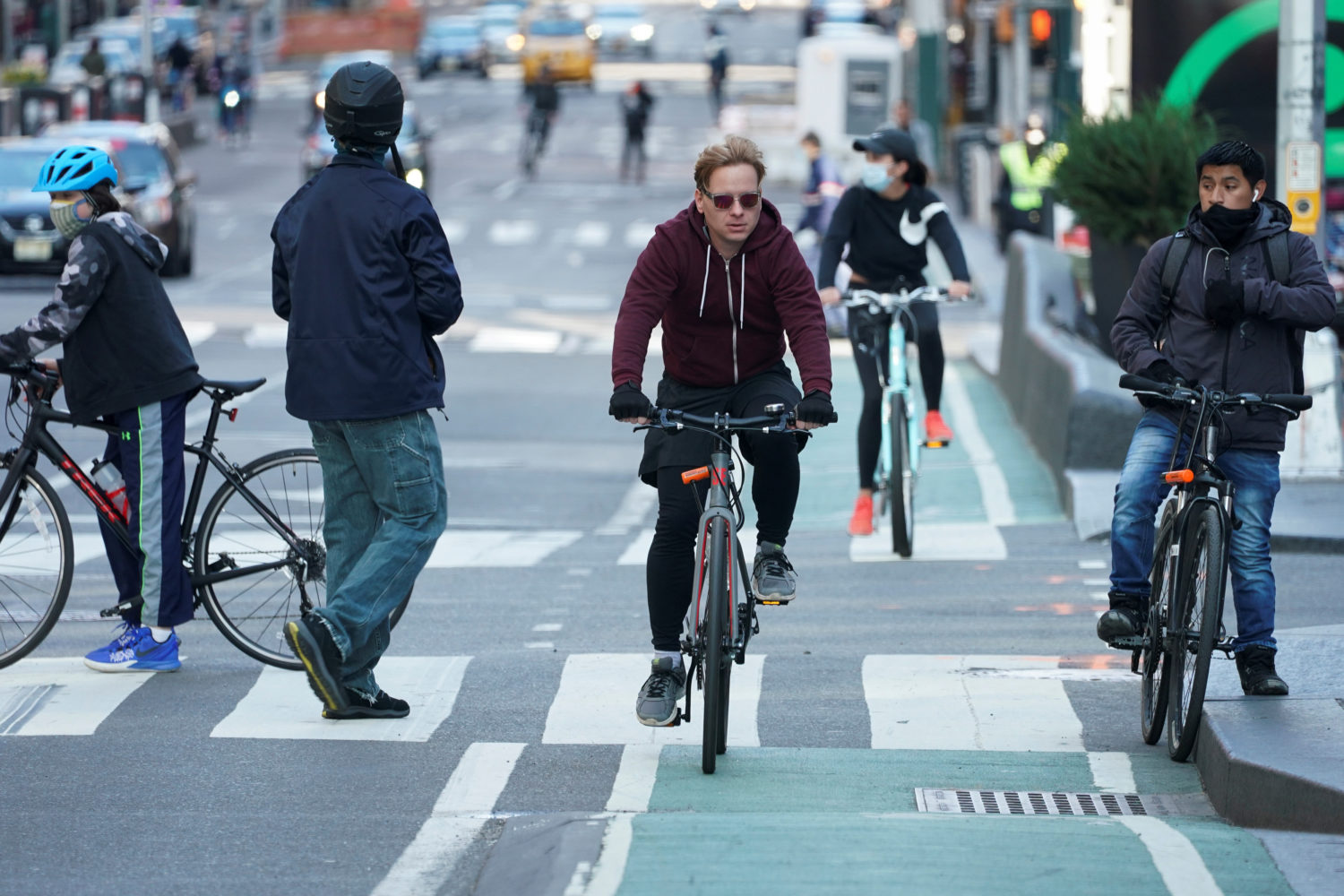 “I’m 51 and healthy, but I don’t want to get on the subway,” said John Donohue, a Brooklyn-based artist who bought a bike two weeks ago. Donohue, who doesn’t own a car, says he’s not sure when he’ll be comfortable on mass transit again.

The coronavirus pandemic has sparked a surge in bike sales across the United States, according to a major manufacturer and a half dozen retailers interviewed by Reuters.

Many of the purchases are by people looking for a way to get outside at a time of sweeping shutdowns and stay-at-home orders aimed at containing the virus: Even the worst affected states are allowing people out to exercise.

Still, a portion of the sales, especially in urban areas, are to people like Donohue who also want to avoid the risk of contagion on buses or subways.

He plans to use his new 24-gear hybrid for journeys such as regular visits to a printing shop across town that he normally travels to by subway. A key feature, he said, was the bright red panniers he added to carry his artwork.

To be sure, bikes remain well down the list of U.S. commuting preferences.

A more recent survey, though, showed a higher percentage of U.S. workers using a bike to get to work. Private research firm Statista Inc.’s 2019 survey showed 5% rode their own bike, while another 1% used a bike share service, an increasingly common option in larger cities.

RUNNING OUT OF STOCK

The government has declared bicycles an essential transportation item, so many bike shops remain open despite the widespread business shutdown. Many, though, have modified how they operate, no longer letting buyers test bikes and handing them over on the curb rather than inside the store.

According to the National Bicycle Dealers Association, roughly three-quarters of U.S. bike sales are through big box stores. While many of the outlets of large specialty sporting goods chains are closed, general merchandisers like WalMart Stores Inc, the largest seller of bikes, remain open. Walmart did not respond to a request for comment.

Kent International Inc., which imports bikes from China and also makes them at a plant in South Carolina, said sales of its low-priced bikes had surged over the past month.

Kent is already out of stock on five of its top 20 models and expects that to rise to 10 by the end of the month, chief executive and chairman Arnold Kamler said. He noted supplies were flowing in from China, which has reopened much of its manufacturing base over the past month.

Kamler said sales at most of the major retailers he supplies were up 30% last month and are up over 50% so far in April, with the surge in demand forcing him to change shipping arrangements.

He normally imports bikes to ports on both the East and West Coasts. But with many retailers asking for more bikes, he’s now directing all shipments into West Coast ports, then transporting them across the country. That adds to freight costs, he said, but can cut weeks off delivery times.

Mark Vautour, who manages a bike store near the Boston University campus, said he had sold bikes to anxious commuters – including at least one medical worker who wanted an alternative to using the subway.

“We’ve joked for years that trains are like a petri dish,” Vautour said.

Mostly, though, his sales have been children’s bikes, “because parents don’t know what to do with their kids.”

One indication that people are buying bikes for more utilitarian uses like commuting is that many of the purchases are low-priced bikes, several bike retailers said.

Those lower prices are one reason many bike retailers are struggling, despite strong sales.

Andrew Crooks, chief executive of NYC Velo, a three-store chain in the New York area, said the drop in average selling prices meant revenues had fallen at a time when he was still paying rents, salaries and other costs.

“So we could keep our doors open and still end up with a business that’s not viable,” he said.

Still, some new buyers say they are switching to bikes for the long term.

Having been stuck at home in Baltimore, Kaitlyn Lee bought a $550 bike this weekend so she could get outdoors safely and avoid public transport when she gets a job.

Lee will finish a graduate degree in public health at the University of Maryland this spring and has applied for jobs at the Centers for Disease Control and the Health Resources and Services Administration, part of the U.S. Department of Health and Human Services. Her plan is to commute by bike to a future job, if possible.

“I mean, it’ll never completely vanish,” she said of the coronavirus. “Rather we will learn how to live alongside of it, just like with other viruses.” 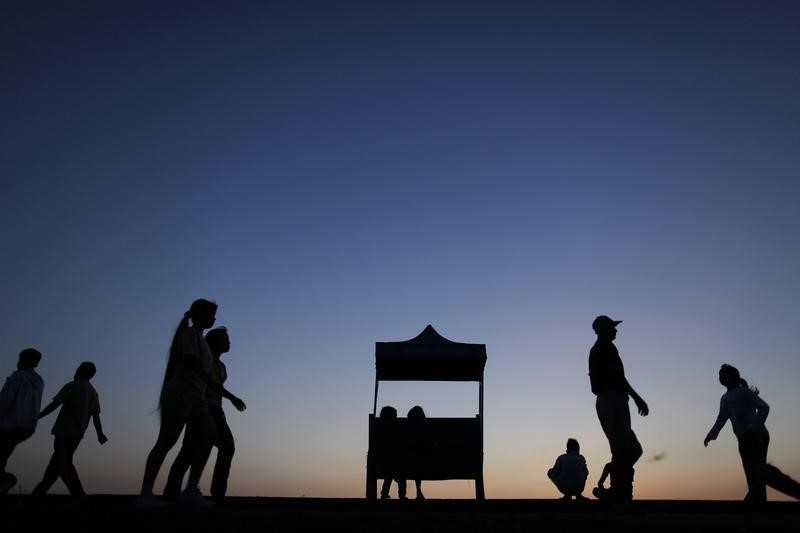 (Reuters Health) – For obese people who sit for most of the day, replacing some sitting time with standing, slow walking or slow cycling reduces average blood sugar across the day and into the night, a small study finds.

“Anything you can do to bring down glucose readings throughout the day is a good thing,” said senior author Glenn Gaesser of the School of Nutrition and Health Promotion at Arizona State University in Phoenix

“We chose a typical workday because a large number of Americans spend a lot of time sitting at an office desk, and a number of (studies) indicate sitting is a health hazard, so we reckoned that trying to alleviate that by either standing or walking or cycling would help,” Gaesser told Reuters Health.

The researchers studied nine overweight or obese adults who wore continuous blood sugar monitors and blood pressure monitors during their regular, mostly-sitting eight-hour workday. One week later, participants gradually replaced some of that sitting time with standing, in intervals of 10 to 30 minutes for a total of two and half hours per day.

The following week, the same amount of sitting time was replaced with walking at a treadmill desk at a pace of one mile per hour. In the fourth week, the intervals were spent cycling on a stationary bike retrofitted to a workstation, also at an extremely slow pace with low energy expenditure.

Average 24-hour glucose was lower for standing and walking than for sitting, and was lowest on the cycling days, the researchers report in Medicine and Science in Sports and Exercise.

There was a similar pattern during the hours right after eating and even during overnight hours, with people having sustained lower blood sugar overnight after days they had cycled.

This is “not wholly surprising,” because other research in the last few years has shown that breaking up prolonged sitting has benefits on glucose over the course of a day, said Dr. Daniel Bailey of the University of Bedforshire in the U.K., who was not part of the study.

It’s uncertain if the difference in blood sugar would have clinical significance or reduce metabolic risk, but that would be more likely for walking and cycling than for standing, which only resulted in a small reduction, Bailey told Reuters Health by email.

“Studies with larger groups would be needed before we could say these findings would apply to overweight people in general,” he said. But it’s likely that overweight or prediabetic people may benefit more from breaking up periods of sitting than healthy-weight people, he said.

“We found that the overall reduction in blood sugar throughout the 24-hour day was typically 5 percent to 12 percent, with the greatest effect being in cycling,” Gaesser said.

After a meal of carbohydrates, most blood sugar is disposed of in skeletal muscle, and muscle contractions increase insulin activity and glucose uptake, which helps to lower blood sugar, he said.

“For low-level activity throughout the workday, the effect lasts well after the last exercise bout at 4:30 or 5:00 in the afternoon,” continuing into sleep, he said.

Breaks in sedentary time are good, even if you don’t have access to a walking or cycling workstation, Gaesser said.

Doctors say a new disorder related to sitting too long at work could be as fatal as smoking.

Dr. Eric Tepper says that sitting for hours can lead to all kinds of chronic diseases no matter how old the patient.

“There’s a lot of research on what exactly is the pathology but it does increase mortality, it increase the risk of heart disease, obesity, diabetes,” Tepper told CBS.

Tepper said that sitting hampers muscle strength, weakens metabolic strength and also cause problems with circulation.  He said those who work in offices and other places where they are sitting need to stand up and walk around on a regular basis.

Tepper said that going to a gym to work out after work for an hour doesn’t help the problems with sitting at work. He says that every person should get up and walk around for at least 10 minutes an hour to offset the damage that can be done by sitting.

A new Loyola University study says that cancer patients who exercise can cut their risk of death in half.

The study of men who beat cancer and who burned more than 12,600 calories a week in some kind of exercise program showed a death rate half of those who did not exercise.

The study also confirmed a previous study that showed cancer survivors who stayed physically active had a 38% less chance of death if the cancer were to return.  They were also 48% less likely to die of cardiovascular disease after their cancer treatments.

“Physical activity should be actively promoted to such individuals to enhance longevity,” Dr. Kathlee Wolin said in the study.

Doctors are telling people who sit at work all day to stand up and walk around the office because sitting for extended periods is as bad for your health as smoking.

Dr. Max Gomez of CBS New York reports the “couch-potato” lifestyle of Americans is resulting in deaths at the same rate as the known health threat.

Dr. Gomez is not alone.

“Smoking certainly is a major cardiovascular risk factor, and sitting can be equivalent in many cases,” Dr. David Coven, a cardiologist at St. Luke’s-Roosevelt Hospital Center, told CBS. “The fact of being sedentary causes factors to happen in the body that are very detrimental.”

Doctors say that you don’t necessarily need to do a 30-minute workout in a gym each day to fight the issues that come with a job requiring you to sit for long periods.  Even walking for 10 minutes at a time three times a day will help improve your health quality.

The key, doctors say, is to undertake activities that get your blood flowing to keep plaque from being able to deposit in arteries.