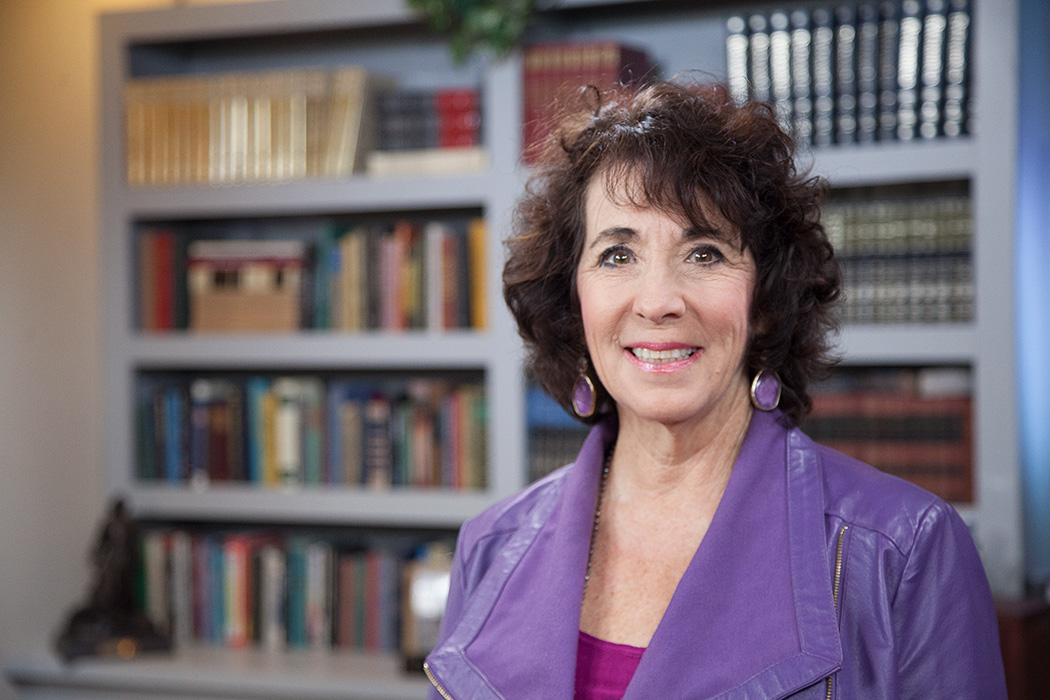 Frank Davis has always brought us new and innovative ways for a healthy lifestyle and has encouraged our television audience to naturally and prayerfully take care of themselves for their future! Lori Bakker said it so well when Frank was at Morningside for his last visit, “If you don’t have your health, it’s really hard to tap into the spiritual side of you.”

Davis has devoted his life and his company to providing the most nutritious and carefully researched food and vitamins for you and your family.

Dr. Sherrill Sellman is a leading voice in women’s holistic health and wellness. In February, she led a remarkable seminar on women’s health. With her no nonsense and extremely educated information, she is a sought after keynote speaker and educator, providing classes, seminars and lectures in the US, Canada, Ireland, the UK, Australia and New Zealand. Sherrill also hosts a weekly radio show called “What Women MUST Know” which empowers women with truthful information for pertinent life issues.

Please join us on Grace Street on Tuesday, April 12th at Morningside to take advantage of an abundance of health knowledge from these experts! Taping for the show begins at 11:30am. CT. This taping will not be live streamed. However, you can view it before it airs on TV via Roku and the Video On Demand section of our website.

I declared War on Alzheimer’s a few months back just like I did with diabetes years ago.  I just said I’m tired of my friends dying of it.  I’m tired of people that I love leaving you before they die.  It’s just wrong.

So, I said there’s got to be some answers. And then I found out some countries have almost no Alzheimer’s so it had to be environmental, or something we were doing wrong.  And you would see a husband and wife (no blood relation) and they both would have Alzheimer’s. That made me think maybe it’s environmental, maybe it’s something we’re eating, maybe it’s something we’re doing wrong.  As I began to study, I found that there was a repeated theme of a #1 answer – coconut! END_OF_DOCUMENT_TOKEN_TO_BE_REPLACED

Doctors have now been able to confirm that type 2 diabetes has a direct connection to the loss of brain matter.

Doctors have known for many years that diabetes has a negative impact on the brain but the study of patients using MRIs shows that long term diabetes has a direct correlation to the greatest loss of brain tissue.

“It’d been thought that most, if not all, of the effect of diabetes on the brain was due to vascular disease that diabetics gets and, therefore, stroke,” Dr. R. Nick Bryan of the University of Pennsylvania told Fox News.  “We found in addition to that, there’s sort of diffuse loss of brain tissue, atrophy, we think may have a direct effect on the diabetes on the brain.”

A study of MRIs on patients close to 62 years of age with type 2 diabetes for at least 10 years showed the greatest reductions of the brain’s gray matter, where the neurons of the brain are located.

Researchers say that for people with diabetes, proper care is a priority to help delay the impact the disease will have on the vascular system and the brain.

A new wave of research is showing huge new benefits to coconut oil.

The oil, long known for its properties as a skin and hair moisturizer, is being shown to protect against proteins that contribute to Alzheimer’s disease.

The study on animals in laboratory settings is considered too preliminary to call coconut oil an official super food according to Dr. David Klufeld with the U.S. Department of Agriculture.

Dr. Glen Lawrence, professor of chemistry and biochemistry at Long Island University, says that coconut oil has many positive properties in the lab.  One study found that coconut oil’s fatty acids kill a wide range of viruses and bacteria.  Dr. Lawrence said it’s unknown if the same process will happen in the body.

Dr. Lawrence also says that coconut oil contains “medium-chain fatty acids” which are easier to digest because the body burns them quickly which some research suggests is good for athletes.

Dr. Bruce Fife, a Colorado naturopathic doctor, says that the tests have been conducted on refined coconut oil so there’s no evidence that virgin oil is better so people can use the oil based on their preferred taste.

A new study from the University of Pennsylvania is showing that ignoring sleep for work or other activities can do more than just make you feel tired:  it can actually kill brain cells.

This is the first sleep study showing permanent brain damage from lack of sleep.  Previous studies had only shown a drop in cognitive abilities, strength and focus without focusing on long term damage.

Dr. Sigrid Veasey, the study’s author, said that neuroscientists knew certain neurons in the brain that did not sleep as long as the person was awake.  They focused on those cells because they believed fatigue in those cells impacted long-term brain health.

“This gave us an indication that maybe [the cells] needed their rest,” she says. “We hypothesized that the cells that were going to be the most likely to get injured would be some of the cells that are active during wakefulness.”

The study showed a loss of as much as 30 percent of neurons in the studied group that was kept sleepless for the longest period of time.

“You can push the system a little bit, but you can’t push it too hard and for too long or you’ll have irreversible consequences,” she says.

Millions of Americans drink excess amounts of coffee every day and many others drink energy drinks and energy shots.

Now, a study is showing that excessive use is creating addictions that lead to a dependence so strong it causes emotional problems.  The problem has become so prevalent that there is now an official diagnosis for it: caffeine use disorder.

“We have people who say caffeine is interfering with their life. They keep saying they’re going to stop, but they can’t,” American University professor Laura Juliano said. “I’ve seen people who have gone to great lengths to get caffeine when it was unavailable. I knew one woman who pretty much ruined her husband’s tropical vacation because she spent half the day looking for caffeine.”

Some studies are suggesting that up to 90 percent of Americans consume caffeine on a regular basis.

Juliano said that despite the widespread use of the drug, there is very little research into the depth of the addiction problem.  She speculated that because most people don’t see caffeine as a dangerous drug, it’s not a priority among researchers.

A new study shows the prevalence of smartphones, tablets and laptops are causing a problem among children with sleep patterns and quality.

The devices emit what scientists call “blue light” that works against the sleep process by hampering the body’s ability to produce melatonin, the chemical that causes the body to feel tired and enhances sleepiness.

The National Sleep Foundation has released a study showing that youth who use smartphones or computer devices before bedtime have a lower quality of sleep and sleep less than peers without the heavy use of electronic devices.

“To ensure a better night’s sleep for their children, parents may want to limit their [children’s use of] technology in the bedroom near or during bedtime,” Orfeu Buxton, PhD, of Harvard Medical School told The Fiscal Times.

The study also showed that the sleep patterns of parents have a direct impact on their children.  If the parents are using electronic devices in the evening before bedtime, the children will follow their parent’s patterns.

Two western states are looking to fight the health battle by raising the age for legally smoking.

Utah and Colorado has both voted for proposals that essentially treat tobacco the same way they treat alcohol.

The new laws are being proposed because a new study showed that many people develop their addictions to tobacco during their teenage years.  A study from the Annals of Internal Medicine says that 9 out of 10 daily smokers had their first cigarette by 19 years of age and that 90 percent of cigarettes bought for minors are bought by 18 to 20-year-olds.

“By raising the age limit, it puts them in a situation where they’re not going to pick it up until a much later age,” Marla Brannum of Utah told legislators.

New York City rose the age for cigarettes to 21 last year.  Several other states are considering 21-for-tobacco bills including Hawaii and New Jersey.

In a surprising admission regarding the damaging effects of smoking to health, CVS Pharmacy announced they will stop selling all cigarette products effective October 1st.

The company says that the move could cost the company billions of dollars because cigarettes are an effective customer draw for their stores.  Public health advocates praised the move saying that it was a watershed moment and they hoped that other major pharmacy chains would follow the CVS example.

The move is believed to be part of attempts by CVS to further define themselves as a health care provider and not just a pharmacy.  The company has over 750 “MinuteClinics” that provide health services such as flu shots and diagnosis of common ailments like strep throat and ear infections.

The removal of cigarettes and the status as a full-fledged health care provider would allow CVS to obtain better and more profitable deals with hospitals and health insurance companies.

President Obama released a statement praising the company for their responsible decision.

A new Loyola University study says that cancer patients who exercise can cut their risk of death in half.

The study of men who beat cancer and who burned more than 12,600 calories a week in some kind of exercise program showed a death rate half of those who did not exercise.

The study also confirmed a previous study that showed cancer survivors who stayed physically active had a 38% less chance of death if the cancer were to return.  They were also 48% less likely to die of cardiovascular disease after their cancer treatments.

“Physical activity should be actively promoted to such individuals to enhance longevity,” Dr. Kathlee Wolin said in the study.