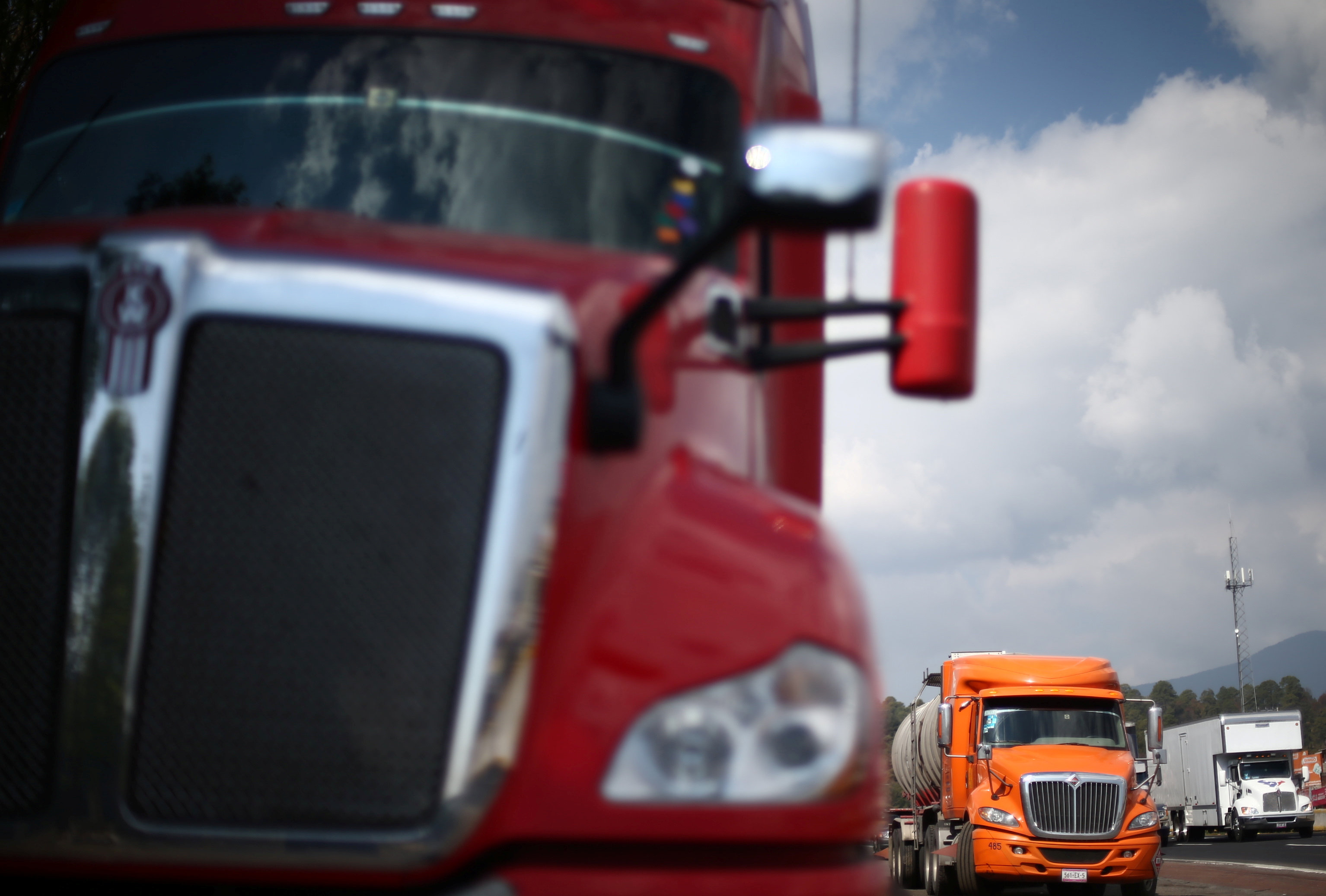 By Noe Torres and Lizbeth Diaz

PUEBLA, Mexico (Reuters) – Glancing constantly at his rear view mirror, truck driver “El Flaco” journeys the highways of Mexico haunted by the memory of when he was kidnapped with his security detail by bandits disguised as police officers two years ago.

Back then, El Flaco, who spoke on condition of anonymity for fear of reprisals, was beaten, blindfolded and taken to a house near Mexico City where his captors threatened to kill him. Three days later he managed to escape and flee.

Today he travels with a machete and a satellite tracking device in his cab that can pinpoint him in emergencies.

Truckers covering Mexico’s vast territory often move in convoys to reduce the risk of robberies, which in 2017 almost doubled to nearly 3,000. Some drive with armed escorts traveling alongside them. Others remove the logos from their trucks. 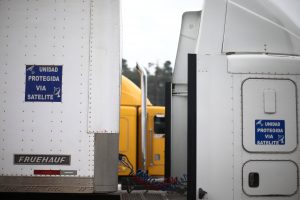 Signs that read “Protected via satellite” are pictured on the side of a trailer on the Mexico-Puebla highway, on the outskirts of Mexico City, Mexico, March 8, 2018. REUTERS/Edgard Garrido

Companies like brewer Grupo Modelo, a unit of AB InBev , and the Mexican subsidiary of South Korea’s LG Electronics have stepped up efforts to protect their drivers, deploying sophisticated geo-location technology and increasing communication with authorities.

The problem is part of a wider Latin American scourge of highway robbery that acts as a further drag on a region long held back by sub-par infrastructure.

“Roads are getting more and more dangerous, you try not to stop,” the 50-year-old El Flaco said, as he drove in the central state of Puebla, the epicenter of highway freight theft.

“Since I was kidnapped, I’ve gotten into the habit of looking in the mirror, checking car number plates, looking at who’s gone past me,” he added. “I look at everything.”

On the most dangerous roads, like those connecting Mexico City with major ports on the Gulf of Mexico and the Pacific, it is almost certain that one in every two truckers will be held up, a study by U.S.-based security firm Sensitech showed.

While no official data on losses exist, insurers paid out almost $100 million in 2016 to crime-hit cargo operators, up 4.5 percent on 2015, Mexican insurance association AMIS says.

The true sum is likely far higher: only one in three loads is insured due to the cost, according to industry estimates.

More than 80 percent of goods are transported by road and rail in Mexico, and the thefts are hurting competitiveness at a time the country is seeking to diversify trade and tap new sources of business.

Upon taking office in December 2012, President Enrique Pena Nieto promised to get a grip on gang violence and lawlessness. But after some initial progress, the situation deteriorated and murders hit their highest level on record last year.

The government has responded by stepping up police patrols in affected areas and lengthening prison sentences for freight robbery to 15 years.

But robberies are still rising and most are not even reported due to the arduous bureaucratic process involved, Sensitech says.

Some drivers are armoring cabs in trucks made by companies like U.S. firm Kenworth, an expensive move that still only covers a tiny fraction of the almost 11 million trucks crisscrossing Latin America’s second-largest economy.

Last year, 53 trucks were armored against high-caliber weapons, up 40 percent from 2016, according to the Mexican Association of Automotive Armorers.

Attacks are not confined to roads. Some 1,752 robberies were recorded on railways last year, official data show.

They are turning to high-caliber weapons and employ devices to block Global Positioning Systems (GPS) to prevent trucks communicating their whereabouts, experts say.

Previously, companies that suffered robberies were generally able to recover their vehicles. Not any more.

“It’s not just the goods they want, it’s the trucks too,” said Carlos Jimenez of Mexican insurance association AMIS.