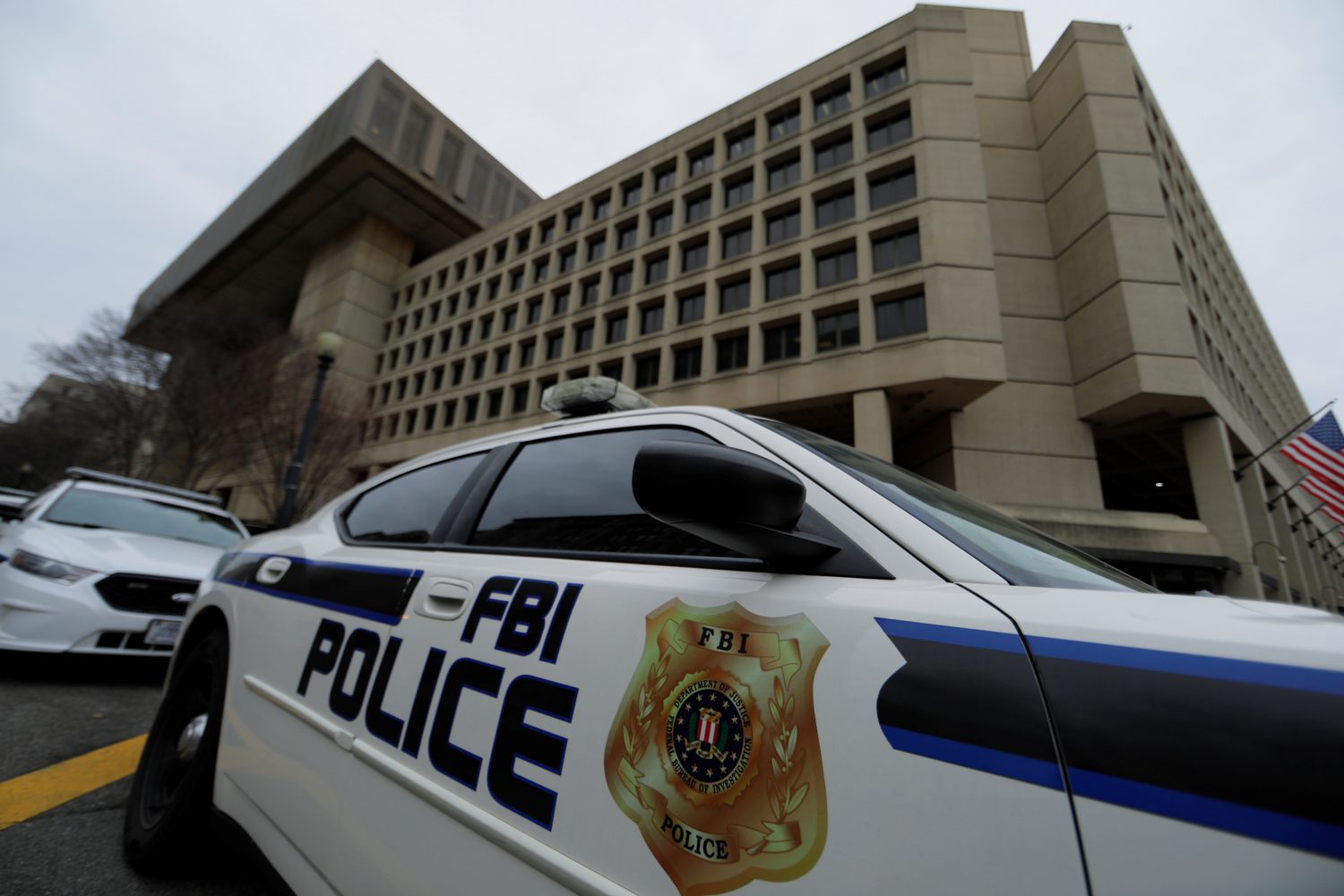 (Reuters) – The number of calls to an FBI tip line designed to head off mass shootings and other attacks surged by 70% in the week after twin massacres in El Paso, Texas, and Dayton, Ohio, federal officials said on Monday.

The Federal Bureau of Investigation fielded more than 38,000 phone and online tips during the week after the shootings, up from the 22,000 tips it typically receives on a weekly basis.

The surge is evidence of an America public made jittery by a steady drumbeat of mass shootings.

“Such increases are often observed after major incidents,” the FBI said in a statement. “As always, the FBI encourages the public to remain vigilant and report any and all suspicious activity to law enforcement immediately.”

FBI officials said the number of tips the center receives each week fluctuates and not all are actionable. Some tips turn into FBI investigations while others are forwarded to local authorities. The number of FBI tips also does not include the thousands of tips that state and local law enforcement agencies have received since the shootings.

Several people have been arrested and charged across the United States in recent weeks as a result of tips.

They have included an employee at a Wisconsin distribution center who called police after a coworker threatened to carry out a workplace shooting and an Alabama resident who alerted authorities after his friend, a Florida trucker, sent him messages about his plans for a shooting at a Memphis church.

In Michigan, a person told authorities that a former classmate threatened to shoot 200 police officers during a phone and text conversation while a woman in Florida told police that her ex-boyfriend texted her about his plan to kill 100 people in a mass shooting, according to police.

“The general public are definitely taking these more seriously,” said John Mina, the sheriff in Orange County, Florida and on the board of directors of the International Association of Chiefs of Police.

Mina is no stranger to mass shootings. He was the police chief in Orlando, Florida, the night of June 12, 2016, when a gunman opened fire at the Pulse nightclub, killing 49 and wounding 53.

Mina also said there has been an increasing amount of resources devoted in local law enforcement agencies to access tips and threats found online, even when the person may not be serious about carrying out the attack.

“Law enforcement has always acted upon it. The difference is now we are being a little more vocal about it,” he said. “Agencies are pushing the message out. It’s not a joke. We are going to arrest you.”

(Reporting by Brendan O’Brien in Chicago; Editing by Scott Malone and Lisa Shumaker) 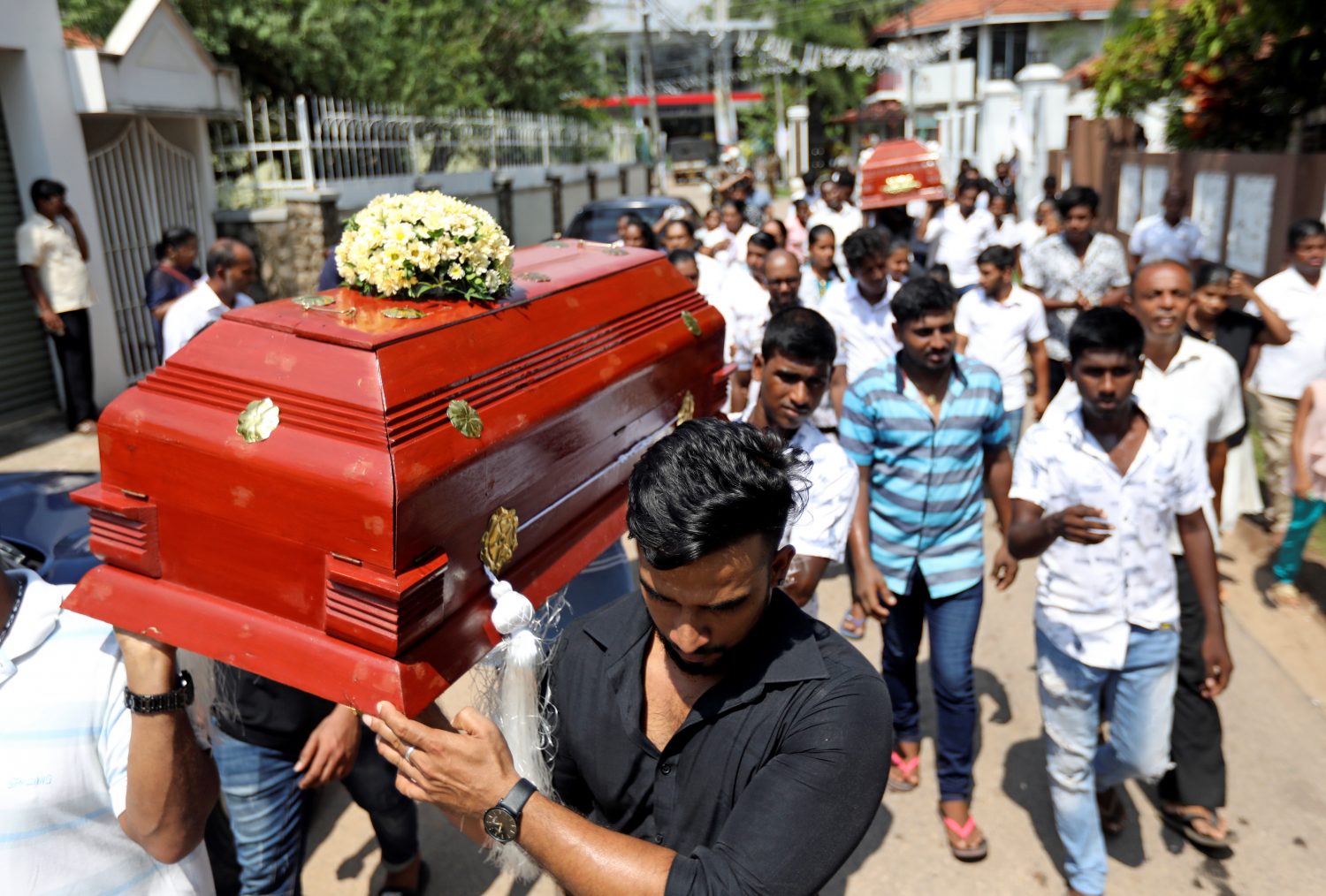 By Sanjeev Miglani and Joe Brock

COLOMBO (Reuters) – The scale and sophistication of the Easter Sunday attacks on churches and hotels in Sri Lanka suggested the involvement of an external group such as Islamic State, the U.S. ambassador said on Wednesday, as the death toll from the bombings rose to 359.

The Islamic State militant group claimed responsibility for the coordinated attacks on three churches and four hotels, and details have begun to emerge of a band of nine, well-educated suicide bombers, including a woman, from well-to-do families.

“If you look at the scale of the attacks, the level of coordination, the sophistication of them, it’s not implausible to think there are foreign linkages,” the U.S. ambassador to Sri Lanka, Alaina Teplitz, told reporters in Colombo.

“Exploring potential linkages is going to be part of (investigations),” she said.

The U.S. Federal Bureau of Investigation and military were supporting the investigation, she said. Britain was also sending a team to help, Sri Lanka said.

Teplitz’s comments came as Sri Lanka’s junior defense minister, Ruwan Wijewardene, conceded that there had been a significant intelligence failure before the attacks, with reports of warnings of strikes not acted on and feuds at the highest levels of government.

“It is a major lapse in the sharing of intelligence information,” Wijewardene told a separate news conference. “We have to take responsibility.”

President Maithripala Sirisena had asked the police chief and defense secretary to quit, two sources close to the president said.

He said information about possible suicide attacks was received from Indian intelligence on April 4 and a Security Council meeting was chaired by President Maithripala Sirisena three days later, but it was not shared more widely.

Police said the death toll had risen overnight to 359 from 321, making it the deadliest such attack in South Asian history. About 500 people were wounded.

Islamic State also released a video late on Tuesday through its AMAQ news agency, showing eight men, all but one with their faces covered, standing under a black Islamic State flag, declaring loyalty to its leader, Abu Bakr Al-Baghdadi.

The one man in the video with his face uncovered was Mohamed Zahran, a Sri Lankan preacher known for militant views.

If the Islamic State connection is confirmed, it would be the deadliest ever such overseas attack linked to the group.

The early Sunday bombings shattered the relative calm that has existed in Buddhist-majority Sri Lanka since a civil war against mostly Hindu, ethnic Tamil separatists ended 10 years ago, and raised fears of a return to sectarian violence.

Sri Lanka’s 22 million people include minority Christians, Muslims and Hindus. Until now, Christians had largely managed to avoid the worst of the island’s conflict and communal tensions.

While the Islamic State video showed eight men, Wijewardene said there were nine suicide bombers. Eight had been identified and one of them was a woman, he said.

“Most of the bombers are well-educated, come from economically strong families. Some of them went abroad for studies,” Wijewardene said.

“One of them we know went to the UK, then went to Australia for a law degree. Foreign partners, including the UK, are helping us with those investigations.”

Wijewardene told parliament on Tuesday that two Sri Lankan Islamist groups – the National Thawheed Jama’ut and Jammiyathul Millathu Ibrahim – were responsible for the blasts. He said on Wednesday the leader of one of those groups blew himself up in the attack on the luxury Shangri-La Hotel in Colombo.

A total of 60 people had been detained for questioning across Colombo since Sunday, Wijewardene said. That total includes a Syrian, according to security sources.

The overnight raids included areas near the Gothic-style St Sebastian church in Negombo, north of the capital, where scores were killed on Sunday, a police spokesman said.

An unspecified number of people were detained in western Sri Lanka, the scene of anti-Muslim riots in 2014.

“Search operations are going on everywhere, there is tight checking of Muslim areas,” a security source said.

Most of those killed and wounded were Sri Lankans, although officials said 38 foreigners were also killed. That included British, U.S., Australian, Turkish, Indian, Chinese, Danish, Dutch and Portuguese nationals. Forty-five children were among the dead.

The government has imposed emergency rule and an overnight curfew. It said it has also blocked online messaging services to stop the spread of inflammatory rumours that it feared could incite communal clashes.