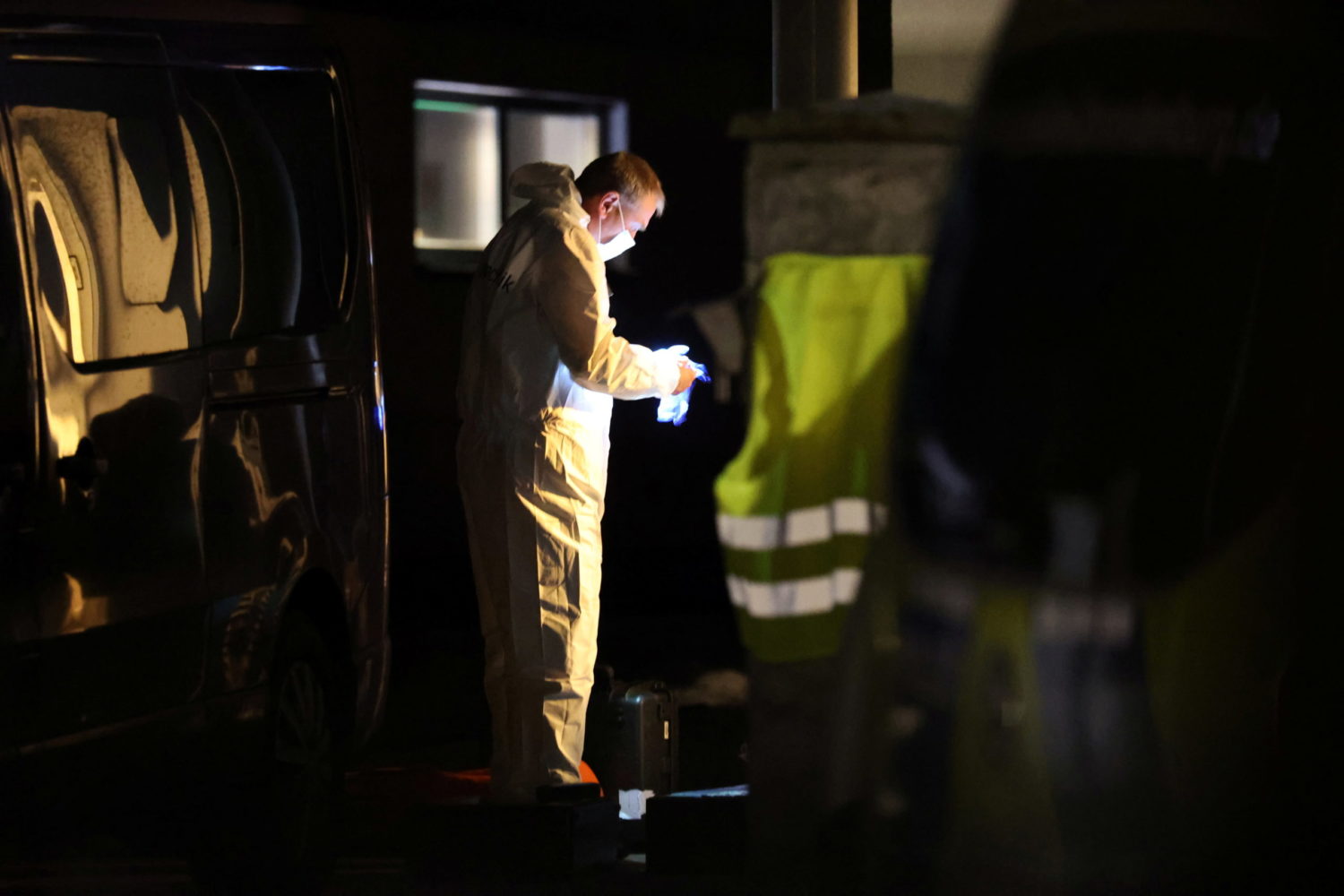 BERLIN (Reuters) – A man who killed his wife and three young children before taking his own life had faked a vaccination certificate and feared his children would be taken away from him when the forgery was discovered, a German prosecutor said on Tuesday.

Police found two adults, both 40, and three children aged four, eight and 10 dead from gunshot wounds in a family home in Koenigs Wusterhausen south of Berlin on Saturday.

In a farewell note found by police, the man said he forged a vaccination certificate for his wife. Her employer had found out, prompting the couple to fear they would be arrested and lose their children, prosecutor Gernot Bantleon told Reuters.

Police were called to the house after being alerted by witnesses who had seen lifeless bodies in the house, police and prosecutors said on Saturday.

The grisly case comes as Germany has been tightening up restrictions to try to stem a fourth wave of the coronavirus pandemic. From last month, employees have been required to show they are vaccinated, recovered or test negative for COVID-19.

German authorities agreed last week to bar the unvaccinated from access to all but the most essential businesses such as grocery stores, pharmacies and bakeries, and they also plan to make vaccination mandatory for some jobs. 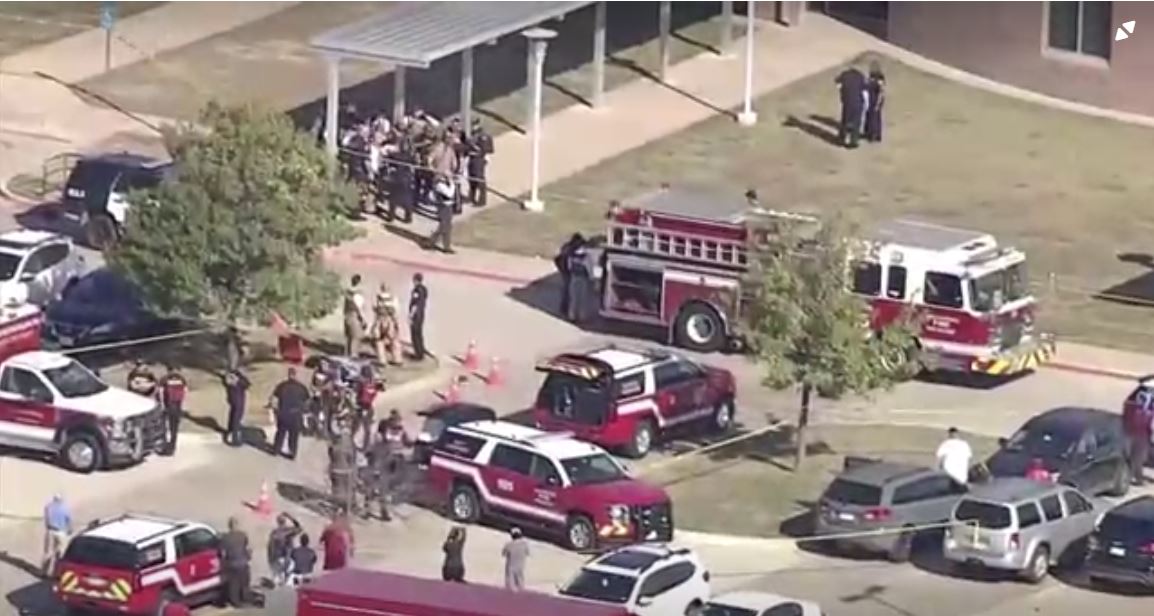 (Reuters) -Authorities arrested an 18-year-old male in connection with a Texas high school shooting that left four people injured after a fight broke out in a classroom on Wednesday morning, police said.

The suspect, who fled the Timberview High School in Arlington, after the shooting, was taken into custody after a brief manhunt and will be charged with three counts of aggravated assault with a deadly weapon, police said.

At least two of the four injured people, one of whom did not require hospitalization, suffered gunshot wounds, police said. One of the victims remains in critical condition.

“What we believe happened, preliminarily, is that there was a fight between a student and another individual in a class and a gun was used, and there are four victims,” Arlington Assistant Police Chief Kevin Kolbye told reporters

The incident, first reported at about 9:15 a.m. local time, on the second floor of the school, prompted a lockdown and a massive police response to secure the building before students were placed on buses and taken off the campus.

The U.S. Bureau of Alcohol, Tobacco, Firearms and Explosives said its agents were also on the scene.

Timberview is part of Mansfield Independent School District, a large district in the Dallas-Fort Worth metropolitan area comprised of 49 schools serving more than 35,000 students.

Kolbye said two officers from the Mansfield Police Department were based in the school and immediately responded.

So far this year, there have been at least 101 incidents involving gunfire on U.S. school grounds, resulting in 21 deaths and 56 injuries, according to Everytown for Gun Safety, a gun violence prevention organization. 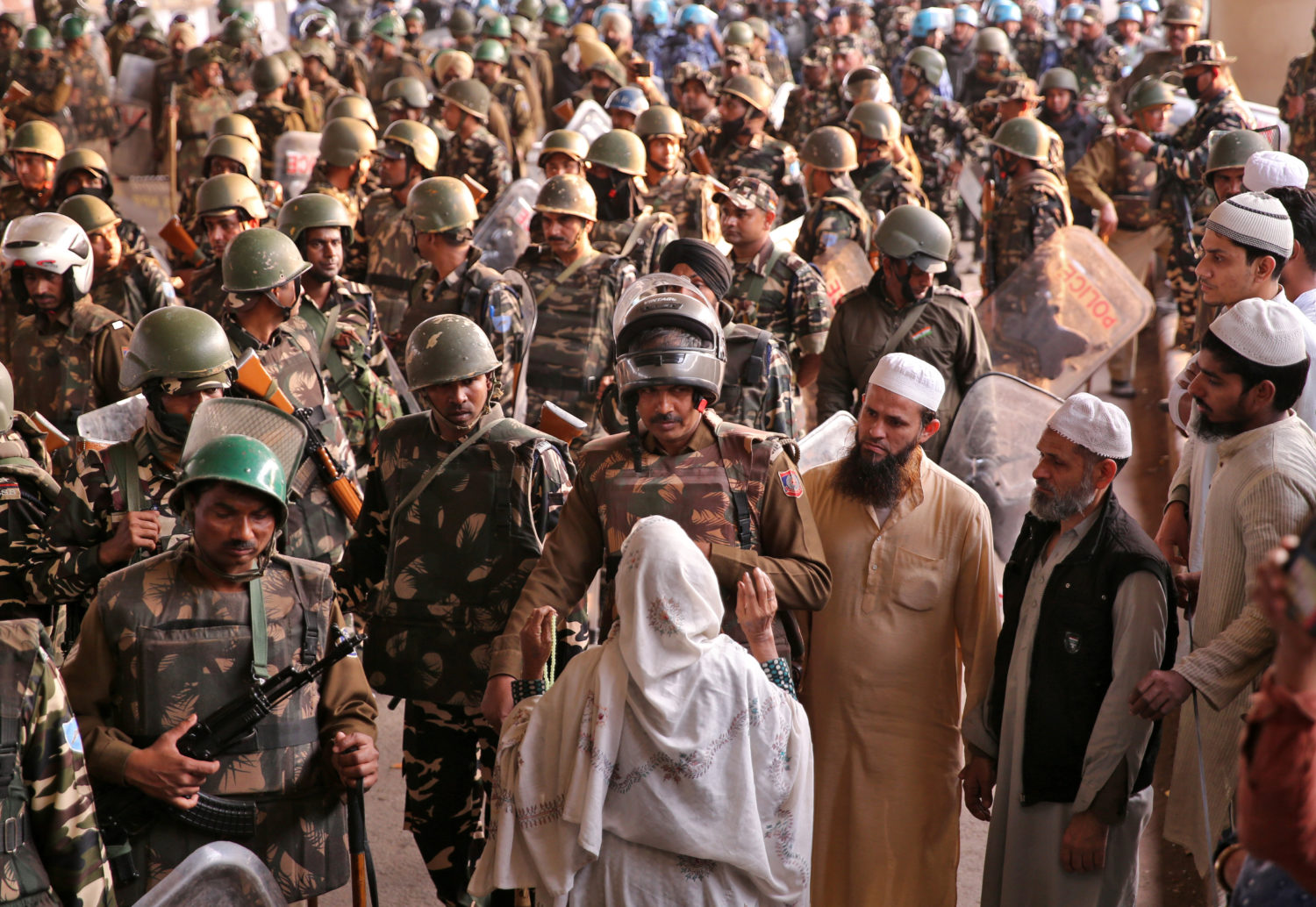 By Devjyot Ghoshal and Manoj Kumar

NEW DELHI (Reuters) – Indian Prime Minister Narendra Modi appealed for calm on Wednesday after days of clashes between Hindus and minority Muslims over a controversial citizenship law in some of the worst sectarian violence in the capital in decades.

Twenty people were killed and nearly 200 wounded in the violence, a doctor said, with many suffering gunshot wounds amid looting and arson attacks that coincided with a visit to India by U.S. President Donald Trump.

Police and paramilitary forces patrolled the streets in far greater numbers on Wednesday. Parts of the riot-hit areas were deserted.

“Peace and harmony are central to our ethos. I appeal to my sisters and brothers of Delhi to maintain peace and brotherhood at all times,” Modi said in a tweet.

Modi’s appeal came after a storm of criticism from opposition parties of the government’s failure to control the violence, despite the use of tear gas, pellets and smoke grenades.

Sonia Gandhi, president of the opposition Congress party, called for the resignation of Home Minister Amit Shah, who is directly responsible for law and order in the capital.

The violence erupted between thousands demonstrating for and against the new citizenship law introduced by Modi’s Hindu nationalist government.

The Citizenship Amendment Act makes it easier for non-Muslims from some neighboring Muslim-dominated countries to gain Indian citizenship.

Critics say the law is biased against Muslims and undermines India’s secular constitution. Modi’s Bharatiya Janata Party has denied it has any bias against India’s more than 180 million Muslims. 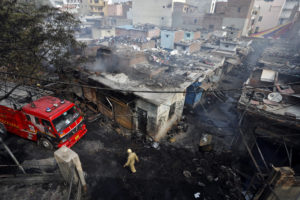 A firefighter walks past damaged shops at a tyre market after they were set on fire by a mob in a riot affected area after clashes erupted between people demonstrating for and against a new citizenship law in New Delhi, India, February 26, 2020. REUTERS/Adnan Abidi

Reuters witnesses saw mobs wielding sticks and pipes walking down streets in parts of northeast Delhi on Tuesday, amid arson attacks and looting. Thick clouds of black smoke billowed from a tyre market that was set ablaze.

Many of the wounded had suffered gunshot injuries, hospital officials said. At least two mosques in northeast Delhi were set on fire.

On Wednesday, the United States Commission on International Religious Freedom (USCIRF) said in a tweet that it was alarmed by the violence and it urged the Indian government “to rein in mobs and protect religious minorities and others who have been targeted”. 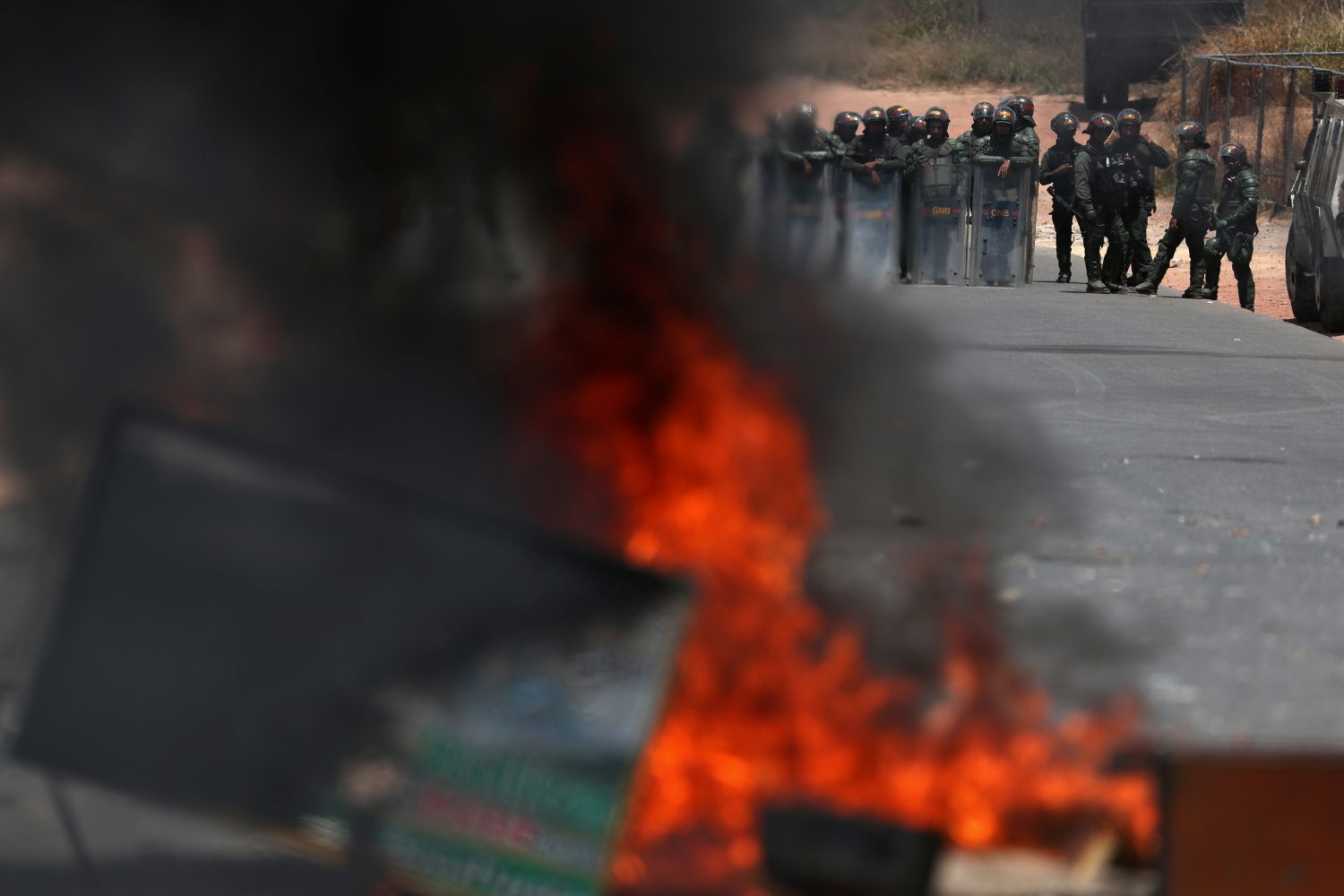 Violent clashes with security forces over the opposition’s U.S.-backed attempt on Saturday to bring aid into the economically devastated country left almost 300 wounded and at least three protesters dead near the Brazilian border.

Juan Guaido, recognized by most Western nations as Venezuela’s legitimate leader, urged foreign powers to consider “all options” in ousting Maduro, ahead of a meeting of the regional Lima Group of nations in Bogota on Monday that will be attended by U.S. Vice President Mike Pence.

Pence is set to announce “concrete steps” and “clear actions” at the meeting to address the crisis, a senior U.S. administration official said on Sunday, declining to provide details. The United States last month imposed crippling sanctions on the OPEC nation’s oil industry, squeezing its top source of foreign revenue.

“What happened yesterday is not going to deter us from getting humanitarian aid into Venezuela,” the official said, speaking with reporters on condition of anonymity.

Brazil, a diplomatic heavyweight in Latin America which has the region’s largest economy, was for years a vocal ally of Venezuela while it was ruled by the leftist Workers Party. It turned sharply against Venezuela’s socialist president this year when far-right President Jair Bolsonaro took office.

“Brazil calls on the international community, especially those countries that have not yet recognized Juan Guaido as interim president, to join in the liberation effort of Venezuela,” the Brazilian Foreign Ministry said in a statement.

Colombia, which has received around half the estimated 3.4 million migrants fleeing Venezuela’s hyperinflationary economic meltdown, has also stepped up its criticism of Maduro since swinging to the right last year.

President Ivan Duque in a tweet denounced Saturday’s “barbarity”, saying Monday’s summit would discuss “how to tighten the diplomatic siege of the dictatorship in Venezuela.”

Maduro, who retains the backing of China and Russia, which both have major energy sector investments in Venezuela, says the opposition’s aid efforts are part of a U.S.-orchestrated coup.

His information minister, Jorge Rodriguez, during a Sunday news conference gloated about the opposition’s failure to bring in aid and called Guaido “a puppet and a used condom.” 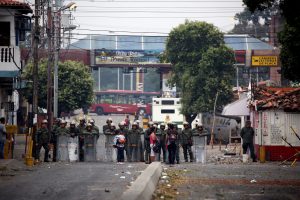 Trucks laden with U.S. food and medicine on the Colombian border repeatedly attempted to push past lines of troops on Saturday, but were met with tear gas and rubber bullets. Two of the aid trucks went up in flames, which the opposition blamed on security forces and the government on “drugged-up protesters.”

The opposition had hoped troops would balk at turning back supplies so desperately needed by a population increasingly suffering malnutrition and diseases.

Winning over the military is key to their plans to topple Maduro, who they argue won re-election in a fraudulent vote, and hold new presidential elections.

The Brazilian border state of Roraima said the number of Venezuelans being treated for gunshot wounds rose to 18 from five in the past 24 hours; all 18 were in serious condition. That was the result of constant gunbattles, which included armed men without uniforms, throughout Saturday in the Venezuelan town of Santa Elena, near the border.

The Venezuelan Observatory of Violence, a local crime monitoring group, said it had confirmed three deaths on Saturday, all in Santa Elena, and at least 295 injured across the country.

In the Venezuelan of Urena on the border with Colombia, streets were still strewn with debris on Sunday, including the charred remains of a bus that had been set ablaze by protesters.

During a visit to a border bridge to survey the damage, Duque told reporters the aid would remain in storage.

“We need everything they were going to bring over,” said Auriner Blanco, 38, a street vendor who said he needed an operation for which supplies were lacking in Venezuela. “Today, there is still tension, I went onto the street and saw all the destruction.”

U.N. Secretary-General Antonio Guterres appealed on Sunday for “violence to be avoided at any cost” and said everyone should lower tensions and pursue efforts to avoid further escalation, according to his spokesman.

But U.S. Senator Marco Rubio, an influential voice on Venezuela policy in Washington, said the violence on Saturday had “opened the door to various potential multilateral actions not on the table just 24 hours ago”. 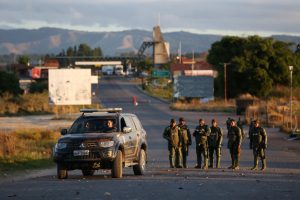 A car of the Brazilian Federal Police is seen at the border between Brazil and Venezuela in Pacaraima, Roraima state, Brazil February 24, 2019. REUTERS/Bruno Kelly

Hours later he tweeted a mug shot of former Panamanian dictator Manuel Noriega, who was captured by U.S. forces in 1990 after an invasion.

President Donald Trump has in the past said military intervention in Venezuela was “an option,” though Guaido made no reference to it on Saturday.

The 35-year old, who defied a government travel ban to travel to Colombia to oversee the aid deployment, will attend the Lima Group summit on Monday and hold talks with various members of the European Union before returning to Venezuela, opposition lawmaker Miguel Pizarro said on Sunday.

“The plan is not a president in exile,” he said.