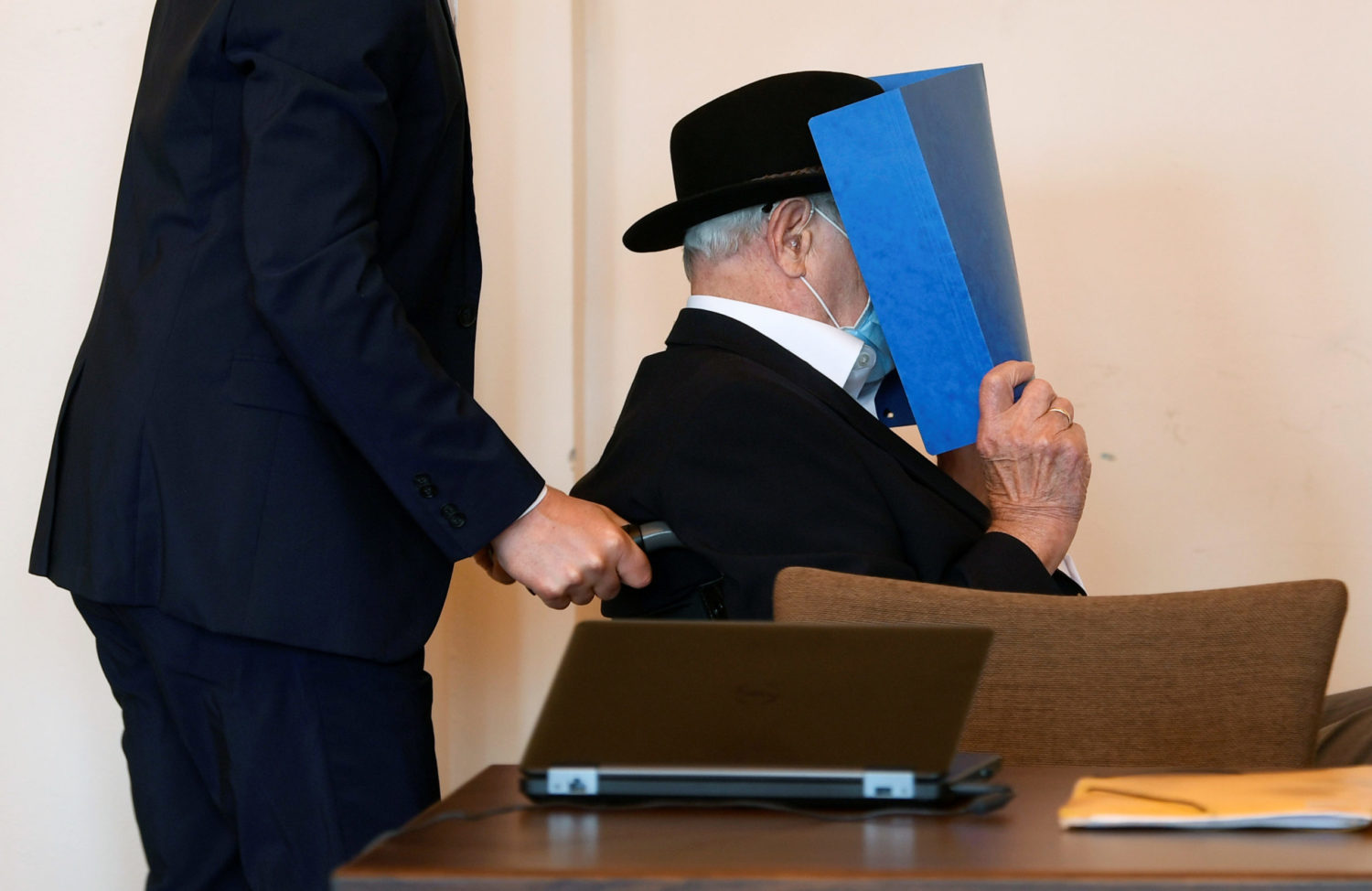 BERLIN (Reuters) – A Hamburg court convicted a 93-year old German man of helping to murder 5,232 prisoners, many of them Jewish, at a Nazi concentration camp in World War Two and gave him a suspended two-year sentence in one of the last cases against Nazi-era crimes.

Rolled into the courtroom in a wheelchair and hiding his face behind a blue folder, Bruno D. acknowledged he had been an SS guard in the Stutthof concentration camp near Gdansk in what was then occupied Poland, but he said his presence did not amount to guilt.

This did not convince the court in Hamburg which found him guilty on Thursday of being involved in the killings from August 1944 to April 1945.

“How could you get used to the horror?” asked judge Anne Meier-Goering as she read the verdict.

About 65,000 people, including many Jews, were murdered or died at Stutthof, the museum’s website says. Prosecutors argued that many were shot in the back of the head or gassed with the lethal Zyklon B gas.

As Bruno D. was only 17-or-18 years old at the time of the crimes, he was tried in a youth court and sessions were limited to two to three hours per day due to his frail health. Prosecutors had called for a prison sentence of three years.

In his final testimony to the court, he apologized for the suffering of victims but stopped short of taking responsibility.

“I would like to apologize to all the people who have gone through this hell of insanity and to their relatives and survivors,” he told the court on Monday, broadcaster NDR and other media outlets reported.

Some 75 years after the Holocaust, the number of suspects is dwindling but prosecutors are still trying to bring individuals to justice. A landmark conviction in 2011 cleared the way to more prosecutions as working in a camp was for the first time found grounds for culpability with no proof of a specific crime. 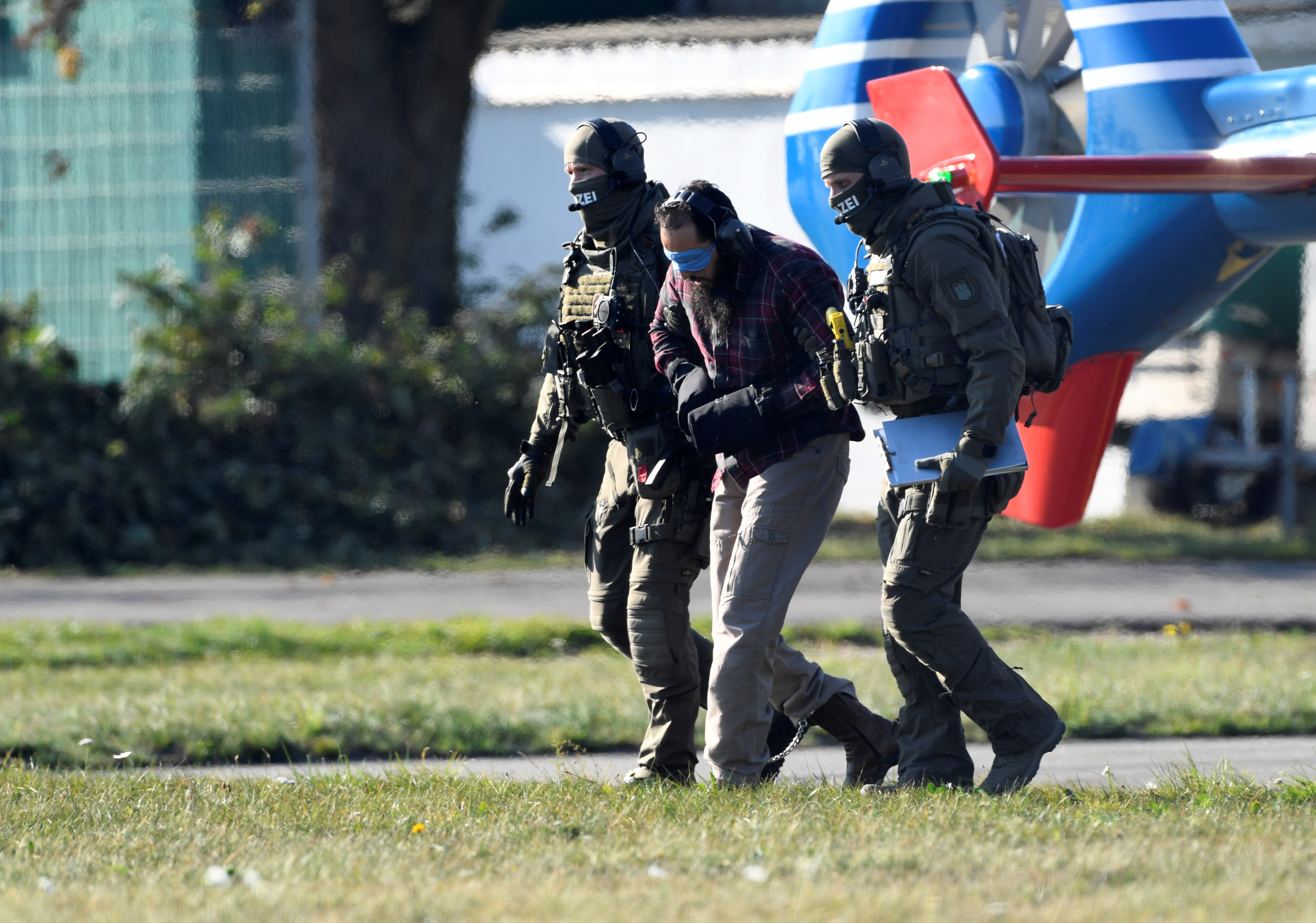 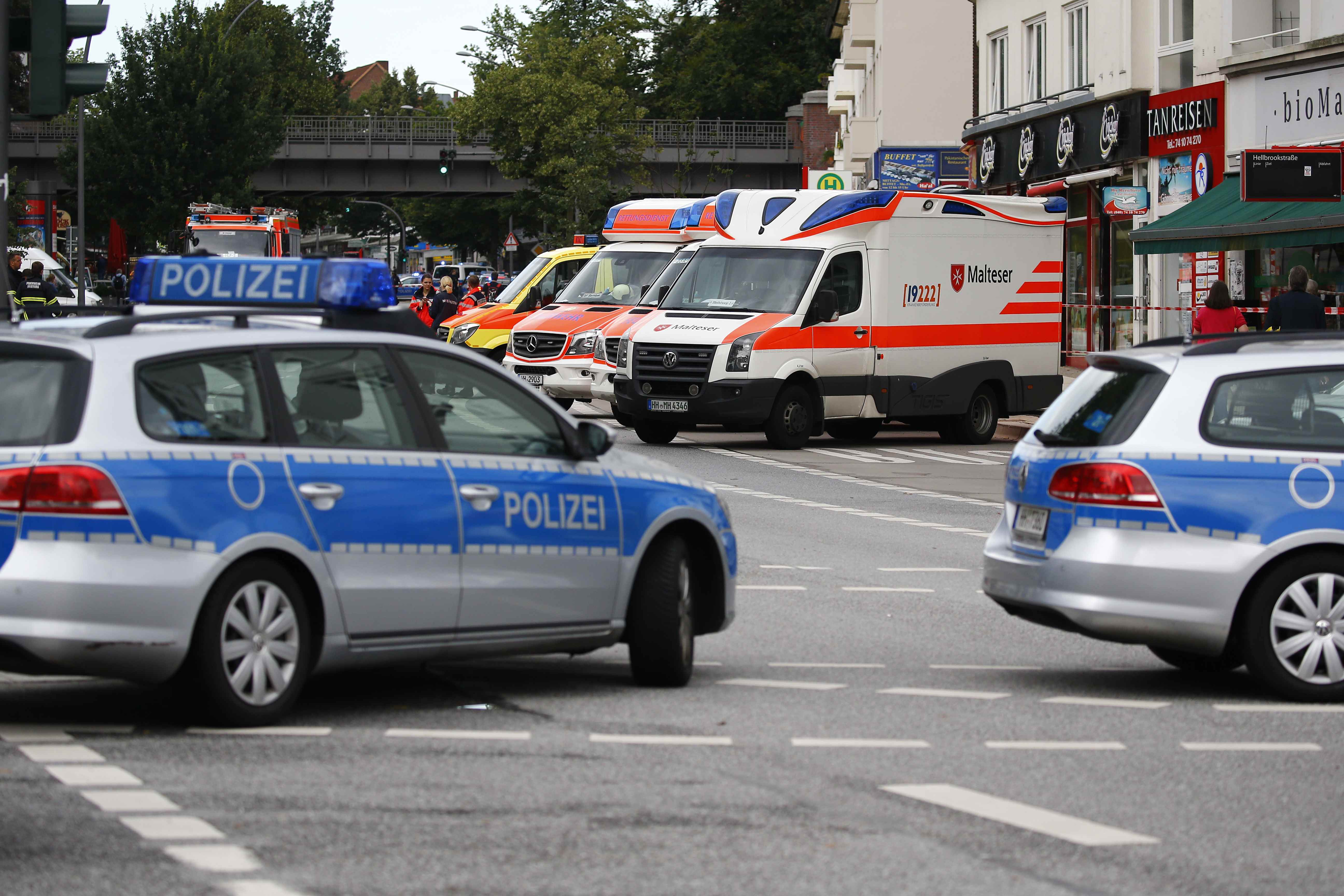 HAMBURG (Reuters) – The migrant who killed one person and injured six others in a knife attack in a Hamburg supermarket on Friday was an Islamist known to German security forces, who say they believed he posed no immediate threat, the city-state’s interior minister said on Saturday.

A possible security lapse in a second deadly militant attack in less than a year, and two months before the general election, would be highly embarrassing for German intelligence, especially since security is a main theme in the Sept. 24 vote.

A Tunisian failed asylum seeker killed 12 people by driving a truck into a Christmas market in Berlin in December, slipping through the net after intelligence officers who had monitored him reached the conclusion he was no threat.

Hamburg Interior Minister Andy Grote told a news conference on Saturday that Friday’s 26-year-old attacker was registered in intelligence systems as an Islamist but not as a jihadist, as there was no evidence to link him to an imminent attack.

He also said the attacker, a Palestinian asylum seeker who could not be deported as he lacked identification documents, was psychologically unstable.

The Palestinian mission in Berlin had agreed to issue him with documents and he had agreed to leave Germany once these were ready, a process that takes a few months.

“The attacker was known to security forces. There was information that he had been radicalized,” he said.

“As far as we know … there were no grounds to assess him as an immediate danger. He was a suspected Islamist and was recorded as such in the appropriate systems, not as a jihadist but as an Islamist.”

Prosecutors said the attacker pulled a 20-centimetre knife from a shelf at the supermarket and stabbed three people inside and four outside before passers-by threw chairs and other objects at him, allowing police to arrest him.

A 50-year-old man died of his injuries. None of the other six people injured in the attack is in a life-threatening condition.

Chancellor Angela Merkel is seeking a fourth term in office in September. Her decision in 2015 to open Germany’s doors to more than one million migrants has sparked a debate about the need to spend more on policing and security.

Tunisian asylum seeker Anis Amri, who could not be deported because he lacked identification documents, carried out his attack at a Christmas market in Berlin in December after security agencies stopped monitoring him because they could not prove suspicions that he was planning to purchase weapons.

(Reporting by Frank Witte in Hamburg; Writing by Joseph Nasr in Berlin; Editing by Andrew Bolton) 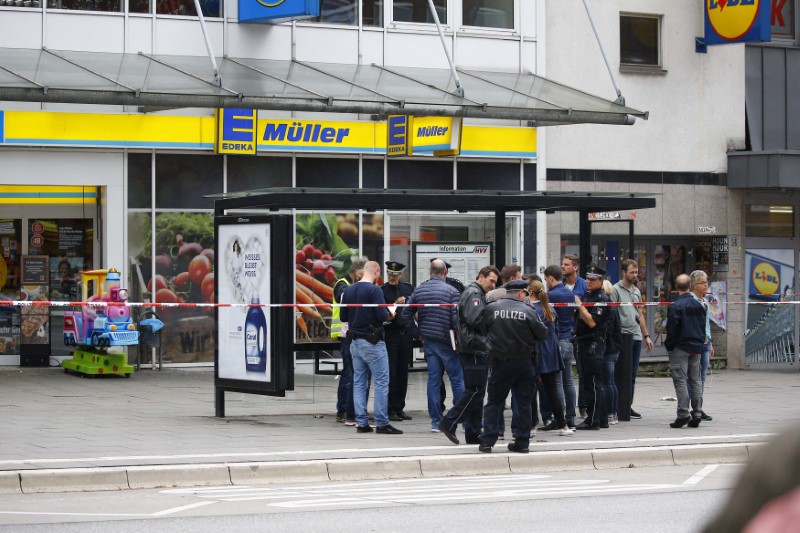 BERLIN (Reuters) – One person was killed in an attack by a lone knifeman in a supermarket in the northern German city of Hamburg on Friday, and four more were injured when the man fled the scene, police said.

The police said the man had suddenly started attacking customers in the shop, with no immediate indication of any political or religious motive. Officers detained him near the site.

“We have no clear information as to the motive or the number of wounded,” Hamburg police said in a tweet. “It was definitely a lone attacker.” They said initial reports about a possible robbery had not been substantiated.

Police said passersby tackled the man after he fled the scene, injuring him slightly, before plain clothes police officers could take him into custody.

Police have been on high alert in Germany since a spate of attacks on civilians last year, including a December attack on a Berlin Christmas market, when a hijacked truck plougher into the crowds, killing 12 and injuring many more.

Security has been a campaign issue ahead of Sept. 24 parliamentary elections, in which Chancellor Angela Merkel is expected to win a fourth term in office.

Newspaper Bild showed a picture of the alleged Hamburg attacker sitting in the back of a police car, his face concealed with a bloodied shroud.

A video on its website showed a helicopter landed outside the supermarket with armed police in body armor patrolling the neighborhood. 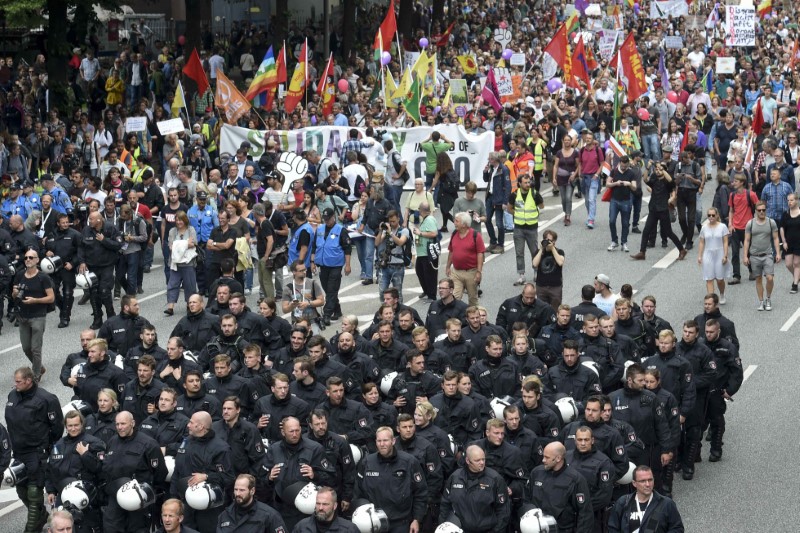 While around 100,000 protestors have staged peaceful marches since Thursday, a hard core of the Black Bloc militants from across Europe have looted stores, set fire to street barricades and hurled bottles and paving slabs.

The head of Hamburg police said he was shocked by the “wave of destructive anger”, riots and arson committed by demonstrators since Thursday.

“We have clear indications it is highly likely that these violent perpetrators will mix in with today’s demonstration ‘G20 – not welcome!’ said Ralf Martin Meyer. “It is to be expected that again, no peaceful protest will be possible.”

The anti-globalisation Attac movement plans a demonstration of up to 100,000 people on the final day of the summit. Police said some 21,000 people had already gathered.

“Today we will bring our criticism of the G20 and our alternatives for fair global policies onto the streets,” said Attac’s Thomas Eberhardt-Koester.

“We want to respond to the police violence and senseless destruction of last night,” he added.

In the last three days, more than 200 police officers have been injured. Some 143 people have been arrested and 122 taken into custody. The number of injured protestors was not available. On Friday night, special armed police had been deployed with sub-machine guns.

World leaders and officials are putting the final touches to a joint statement on issues ranging from trade to climate change on Saturday, the final day of the summit.

Merkel had wanted to show her commitment to free speech by hosting G20 leaders in Hamburg, a port city with a strong radical tradition, but images of burning cars and shops and streets awash with debris have raised questions about that strategy.

Hamburg residents inspected the destruction on Saturday and said they were angry the summit was taking place there.

“Merkel underestimated the protests. The least she can do now is come visit (the district of) Sternschanze and see the damage for herself,” said Kai Mertens, a 50-year-old programmer.

“We are a very liberal district. But what they did here has nothing to do with the G20 or opposition to politics. They were hooligans and many were foreigners,” added Mertens.

Police from across Germany have been brought to Hamburg to reinforce the local force. A 27-year old German suspected of attempted murder after pointing a laser pointer at a police helicopter was due to face a judge on Saturday, said police.