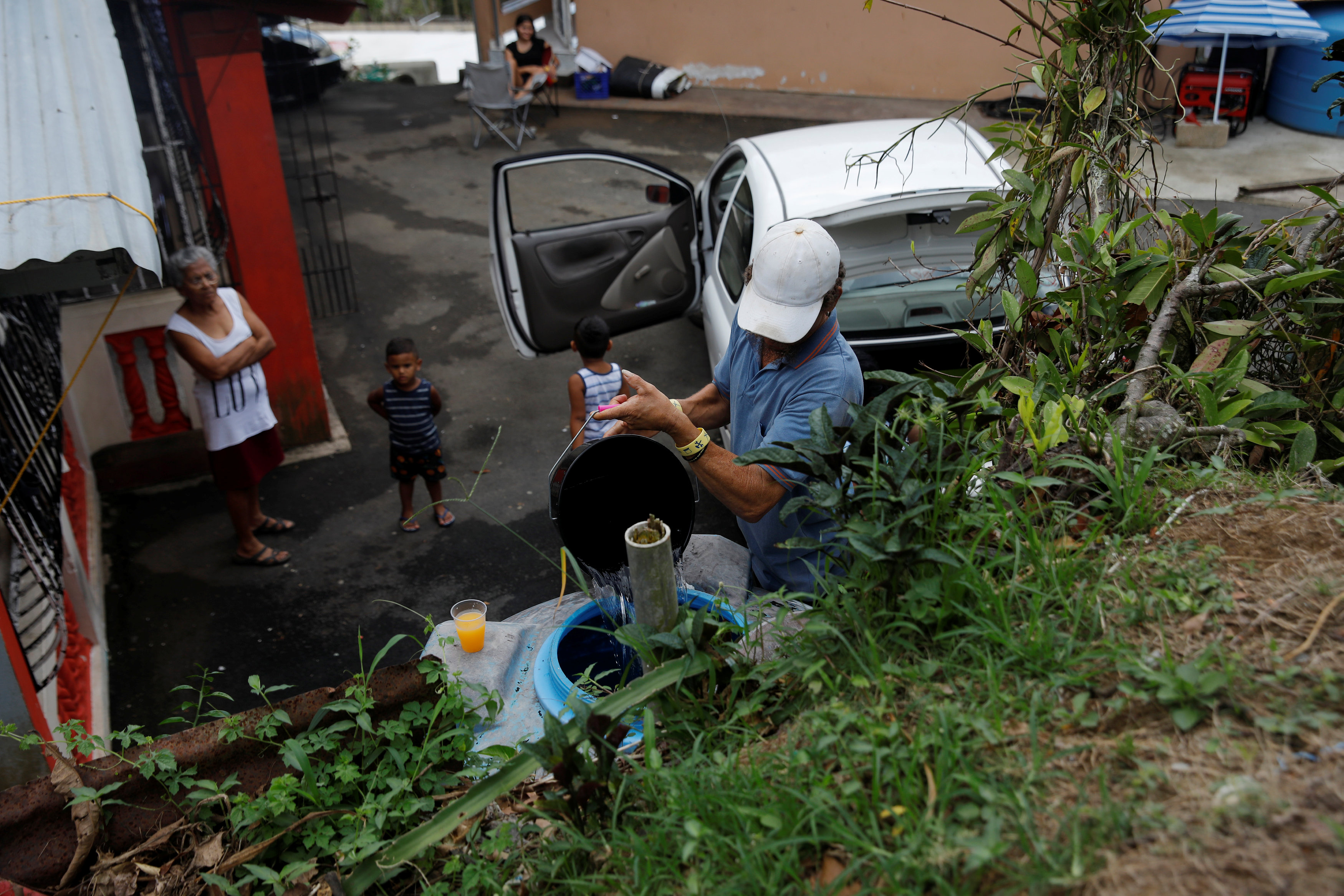 TRUJILLO ALTO, Puerto Rico (Reuters) – In the lowlands of Trujillo Alto, a sprawling suburb of San Juan, clean water once again flows in the homes of most residents. But in the mountainous part of the city, which is largely poor and semi-rural, finding clean water remains a daily struggle.

Across Puerto Rico, officials say, altitude matters. While workers are making steady progress restoring power and running water to coastal regions, where the territory’s largest cities are located, the mountainous regions at the island’s center are proving challenging.

“Are people in the mountains in a worse situation than urban people? Of course,” said Puerto Rico’s minister of public policy, Ramon Rosario, “because they are more distant from the power generators on the coasts.” Without electricity, he noted, the pumps that carry water up into the mountains can’t operate or must rely on generators.

A mix of Puerto Ricans live in the “Cordillera Central,” or central range of Puerto Rico, which is far more sparsely populated than coastal regions. Many residents are poor, living in rural, agrarian-based communities. But the region also has wealthy residents seeking the cooler temperatures and beauty of the cordillera.

In Trujillo Alto, a community of 85,000 that sits partly on flat land but also extends into the mountains, hurricane recovery varies sharply by altitude.

Lydia Perez Molina, 72, still relies on government-provided food and water in her mountain-top home, where she weathered hours of howling winds and hammer-blow rains during the Sept. 20 storm.

“Water came in through the window and the wind was like a monster,” Perez Molina said.

Now, she said, tears welling up in her eyes, her son spends his time “searching and struggling to bring us what we need. He’s standing in line for water at one place and for food at another.” 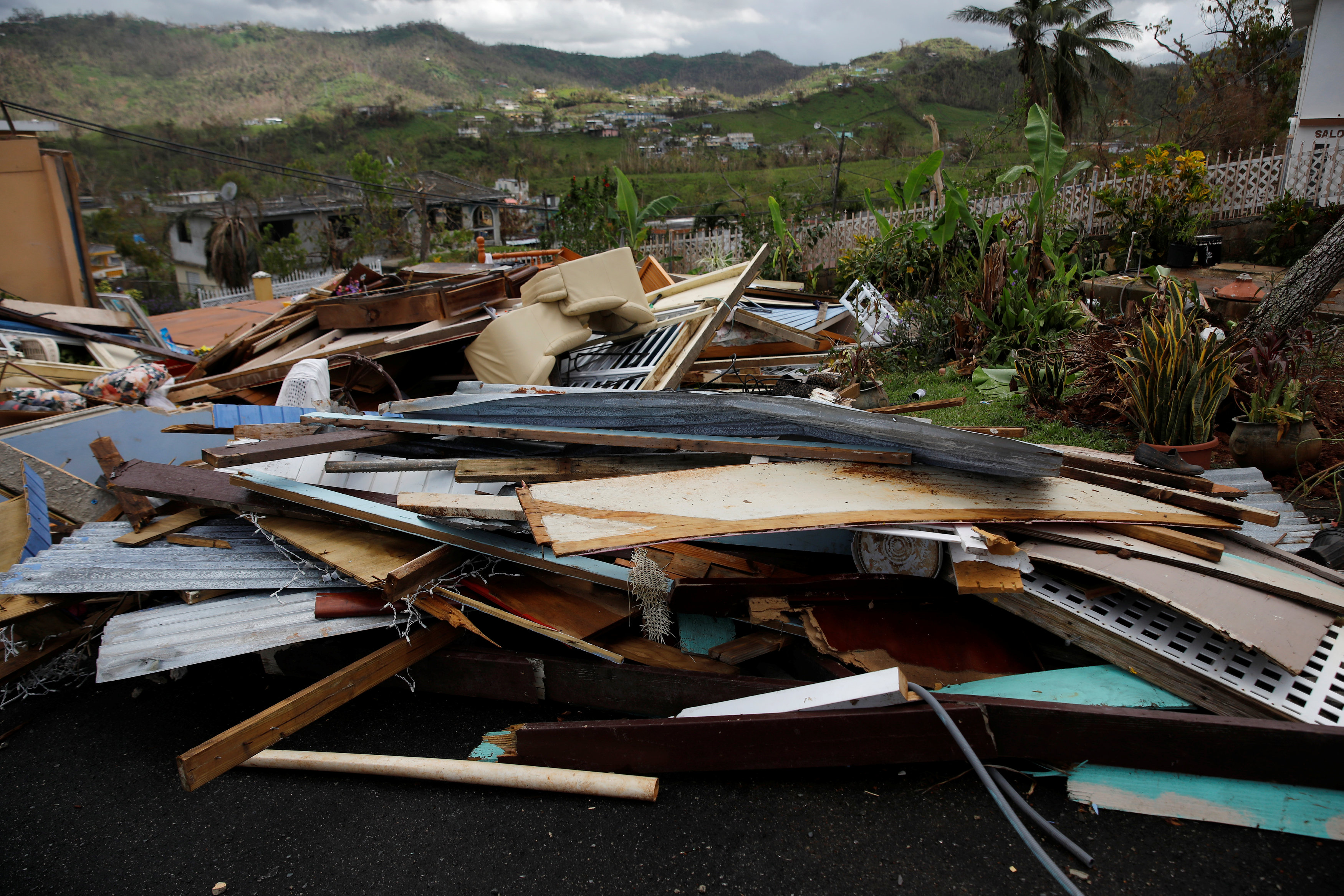 Debris is seen outside a home damaged by Hurricane Maria is seen in the Trujillo Alto municipality outside San Juan, Puerto Rico, October 9, 2017. REUTERS/Shannon Stapleton

On Monday, Lourdes Zayas, president of the Trujillo Alto town council, gathered with dozens of other volunteers in the municipality’s basketball gym to put together care packages of rice, beans, milk and other basic foods that are trucked out several times a day to hard-hit parts of town.

“We can keep supplying food and drinking water as long as we need to,” Zayas said. “As for the electricity, who knows.”

Trujillo Alto Mayor Jose Luis Cruz said 70 percent of the richer, low-lying parts of town now have steady supplies of water, but there is no electricity to pump water up to the poorer parts of the municipality.

Moving heavy trucks and machinery into mountain areas to clear hazards and restore electrical lines is proving difficult, too, said a civilian employee of the Army Corps of Engineers, who was deployed to Puerto Rico to work on restoring the electrical grid.

He said he was sent to Florida after Hurricane Irma to work on restoring power, but that the two situations were starkly different.

“Irma was a repair job,” he said, asking that his name not be used as he was not authorized to speak to the press. “This is a rebuild.”