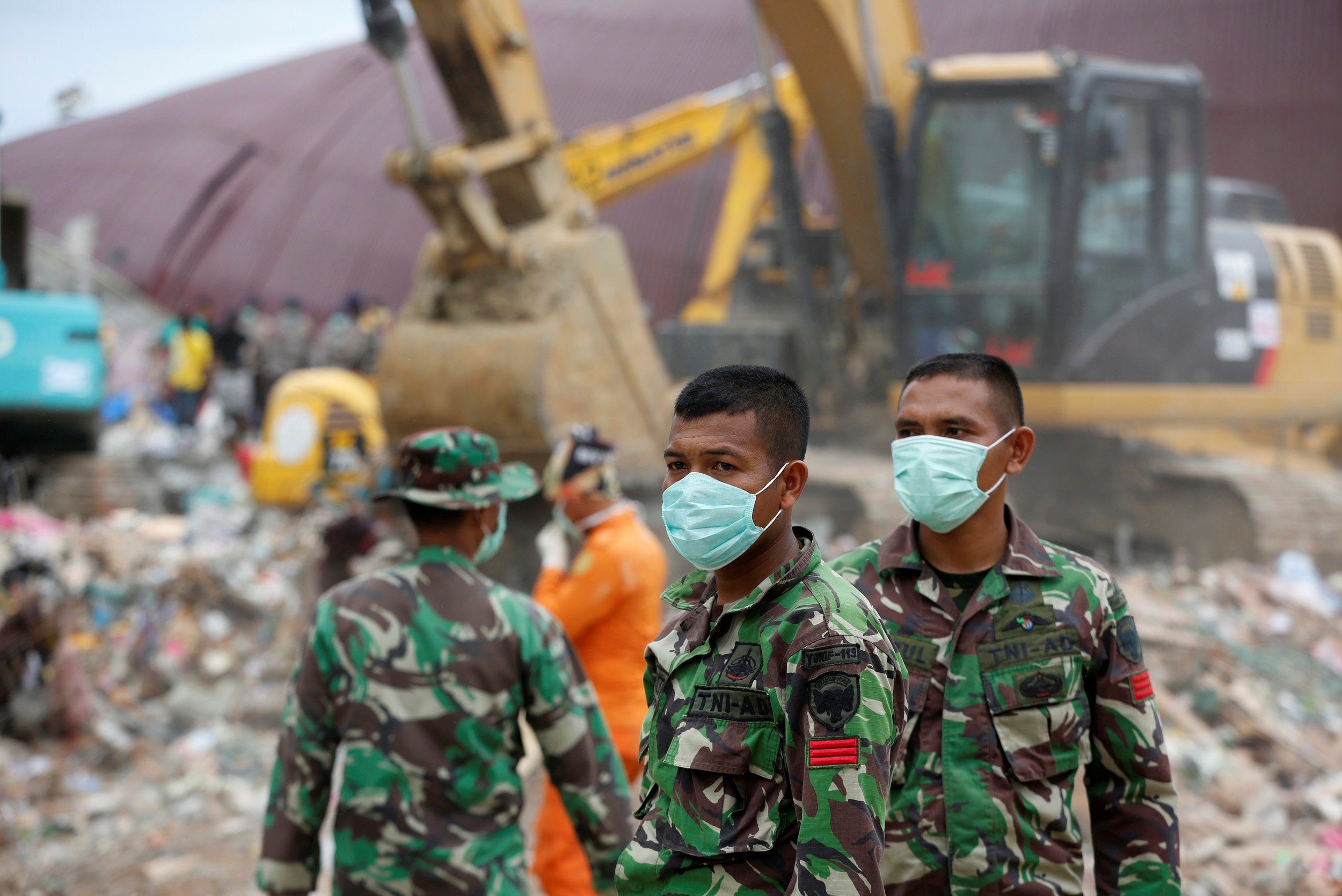 By Tommy Ardiansyah and Djohan Widjaya

Wednesday’s 6.5 magnitude earthquake, which toppled dozens of buildings and injured hundreds of people, was the worst disaster to hit the region since the 2004 Indian Ocean tsunami. 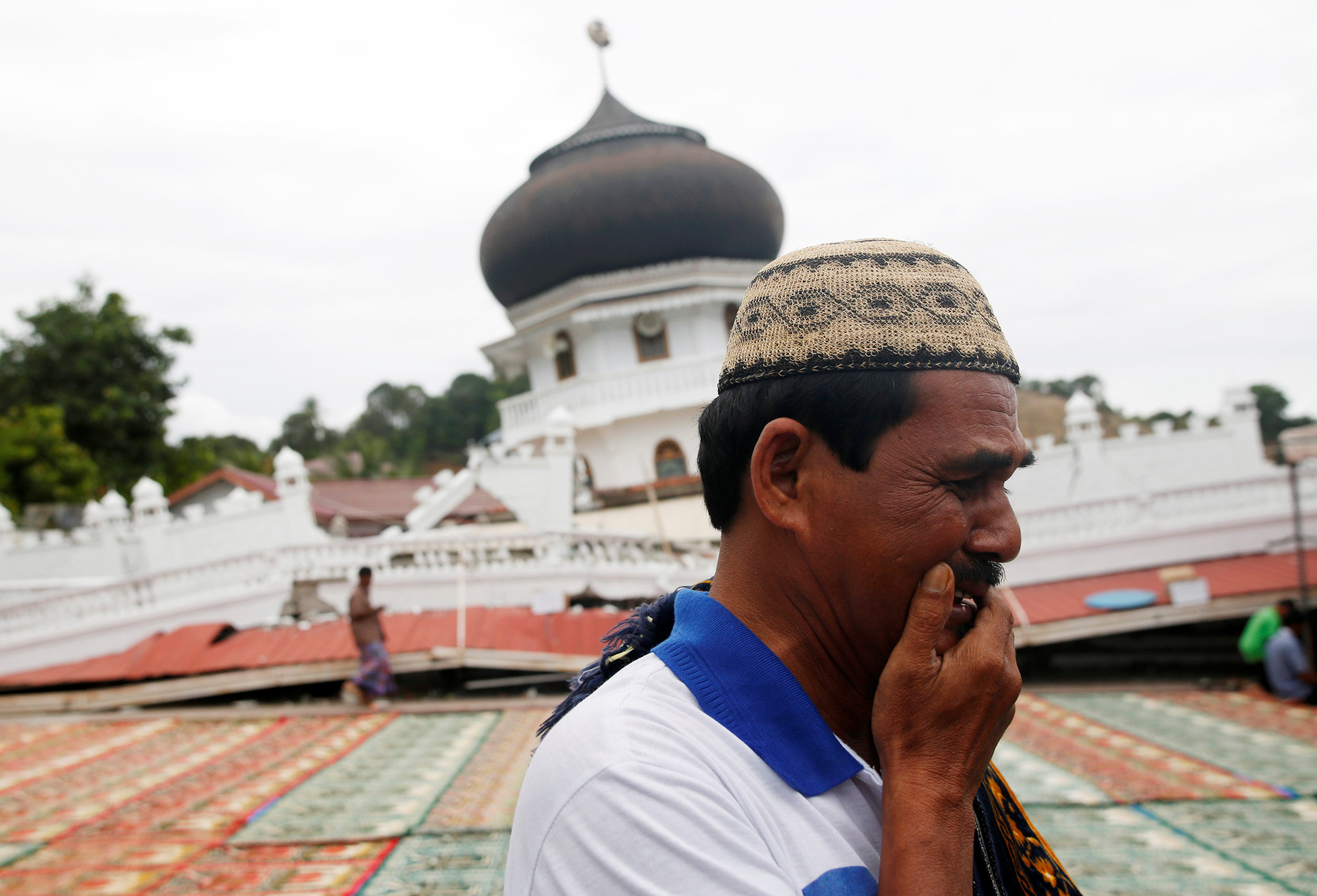 A Muslim man weeps as he arrives for Friday prayers at Jami Quba mosque which collapsed during this week’s earthquake in Pidie Jaya, Aceh province, Indonesia December 9, 2016. REUTERS/Darren Whiteside

“We believe we have found 99 percent of the victims,” said Sutopo Nugroho, spokesman of the national disaster management agency.

Hundreds of people in Aceh’s Pidie Jaya regency held Friday prayers outside mosques that had been reduced to rubble.

Many residents of the town of 140,000 have been sleeping in shelters and relief workers have been handing out food, water, and blankets.

President Joko Widodo visited survivors, including many getting treatment for broken bones in hospitals and tent clinics.

The province of Aceh, on the northern tip of Sumatra island, has declared a two-week state of emergency and the central government has pledged aid for recovery efforts. 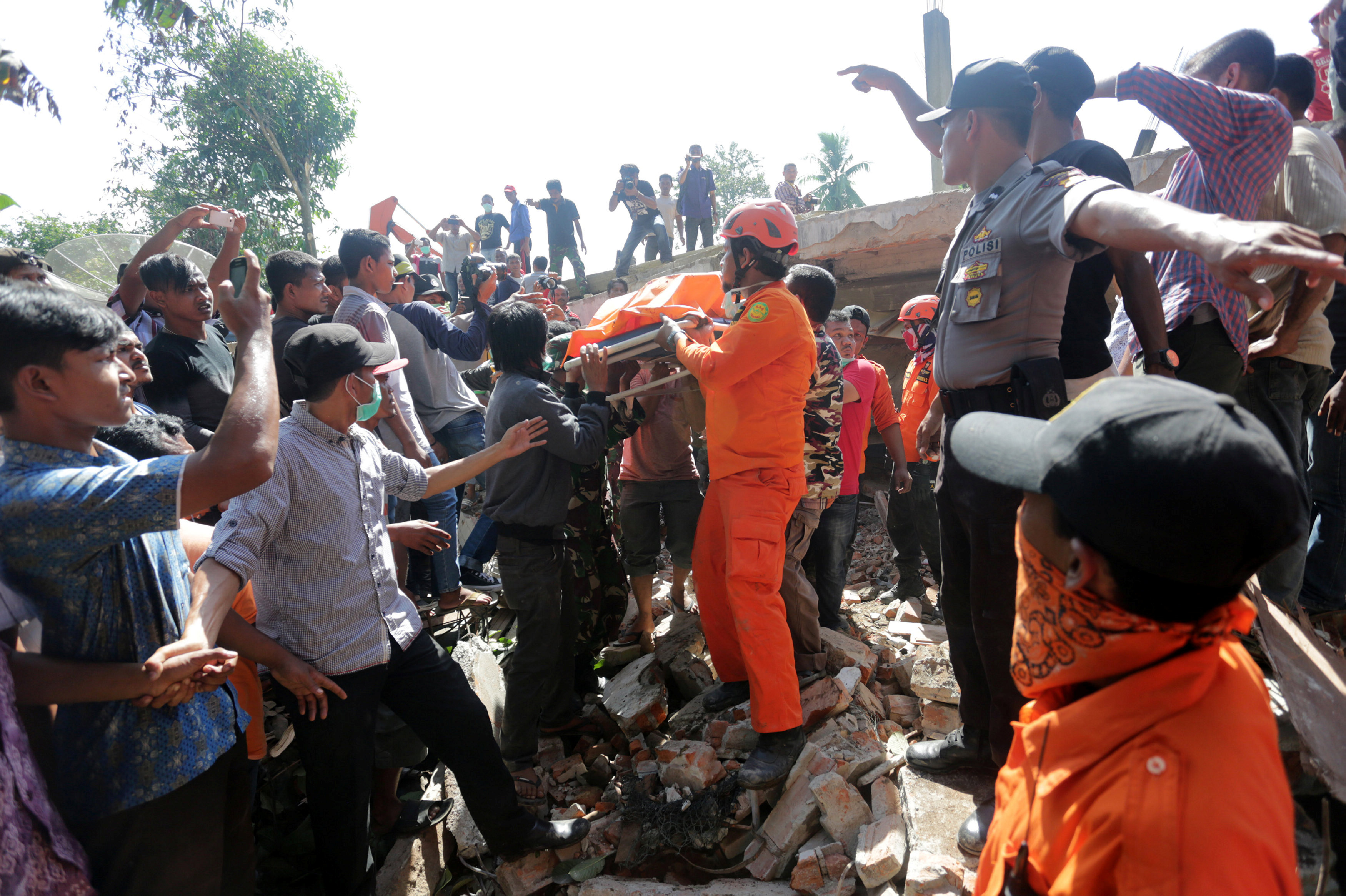 PIDIE JAYA, Indonesia (Reuters) – Nearly 100 people were killed and hundreds injured in Indonesia on Wednesday when a strong earthquake hit its Aceh province and rescuers used earth movers and bare hands to search for survivors in scores of toppled buildings.

Medical volunteers rushed in fading evening light to get people to hospitals, which were straining to cope with the influx of injured.

The Aceh provincial government said in a statement 93 people had died and more than 500 were injured, many seriously.

Sutopo Nugroho of Indonesia’s national disaster management agency, said a state of emergency had been declared in Aceh, which sits on the northern tip of Sumatra island.

“We are now focusing on searching for victims and possible survivors,” said Nugroho. His agency put the death toll at 94. 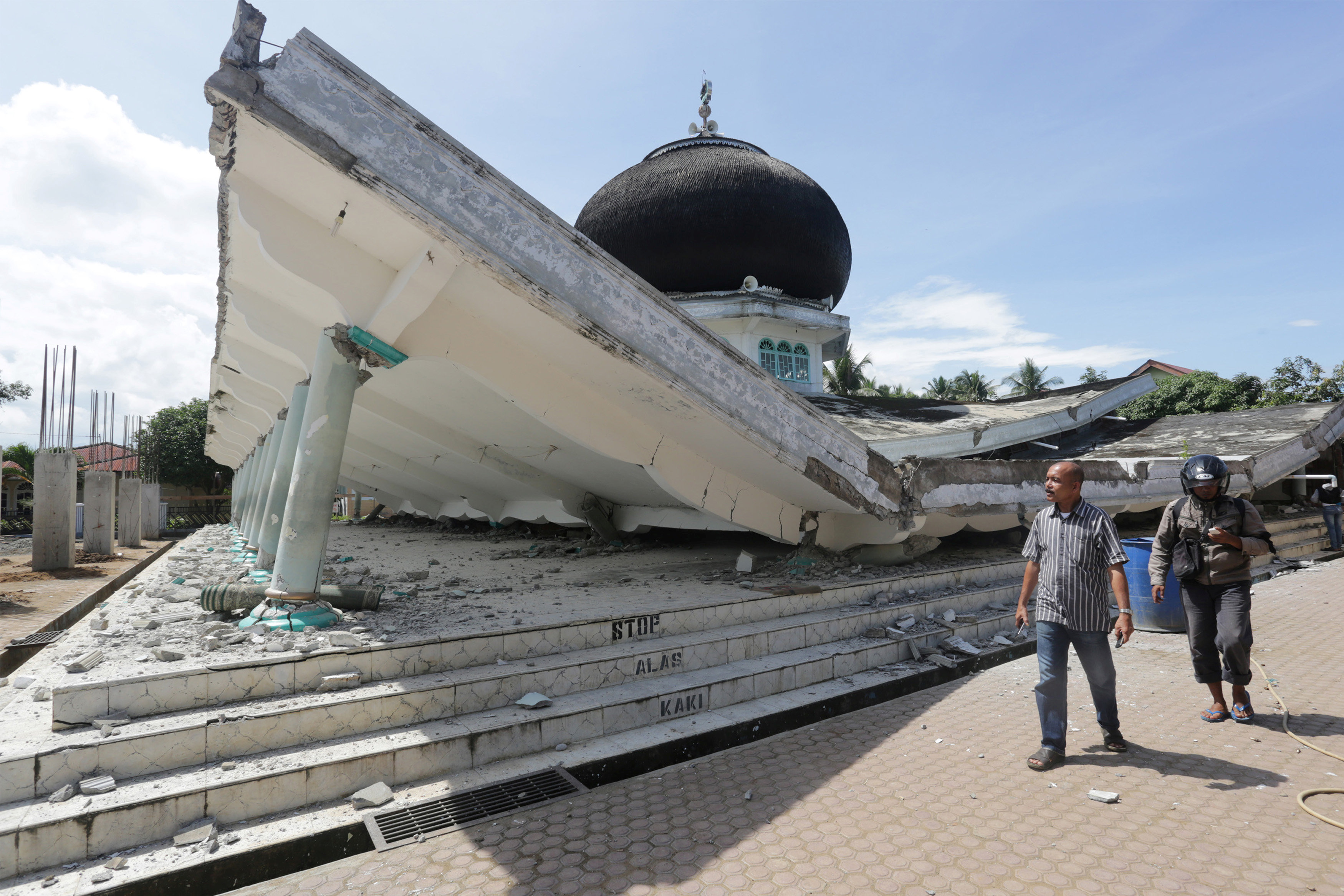 People walk near a collapsed mosque following an earthquake in Meuredu, Pidie Jaya in the northern province of Aceh, Indonesia December 7, 2016 in this photo taken by Antara Foto. Antara Foto/ Irwansyah Putra/via REUTERS

Aceh was devastated by a massive earthquake and tsunami centered on its western coast near the provincial capital, Banda Aceh, on Dec. 26, 2004. That tsunami killed 226,000 people along Indian Ocean shorelines.

President Joko Widodo was expected to visit the area on Thursday, his deputy told media.

Wednesday’s quake hit the east coast of the province, about 170 km (105 miles) from Banda Aceh. Nugroho said Aceh’s Pidie Jaya regency, with a population of about 140,000, was worst hit.

Many victims had suffered broken bones and gashes and had to be treated in hospital corridors and hastily erected disaster tents, a Reuters witness said. 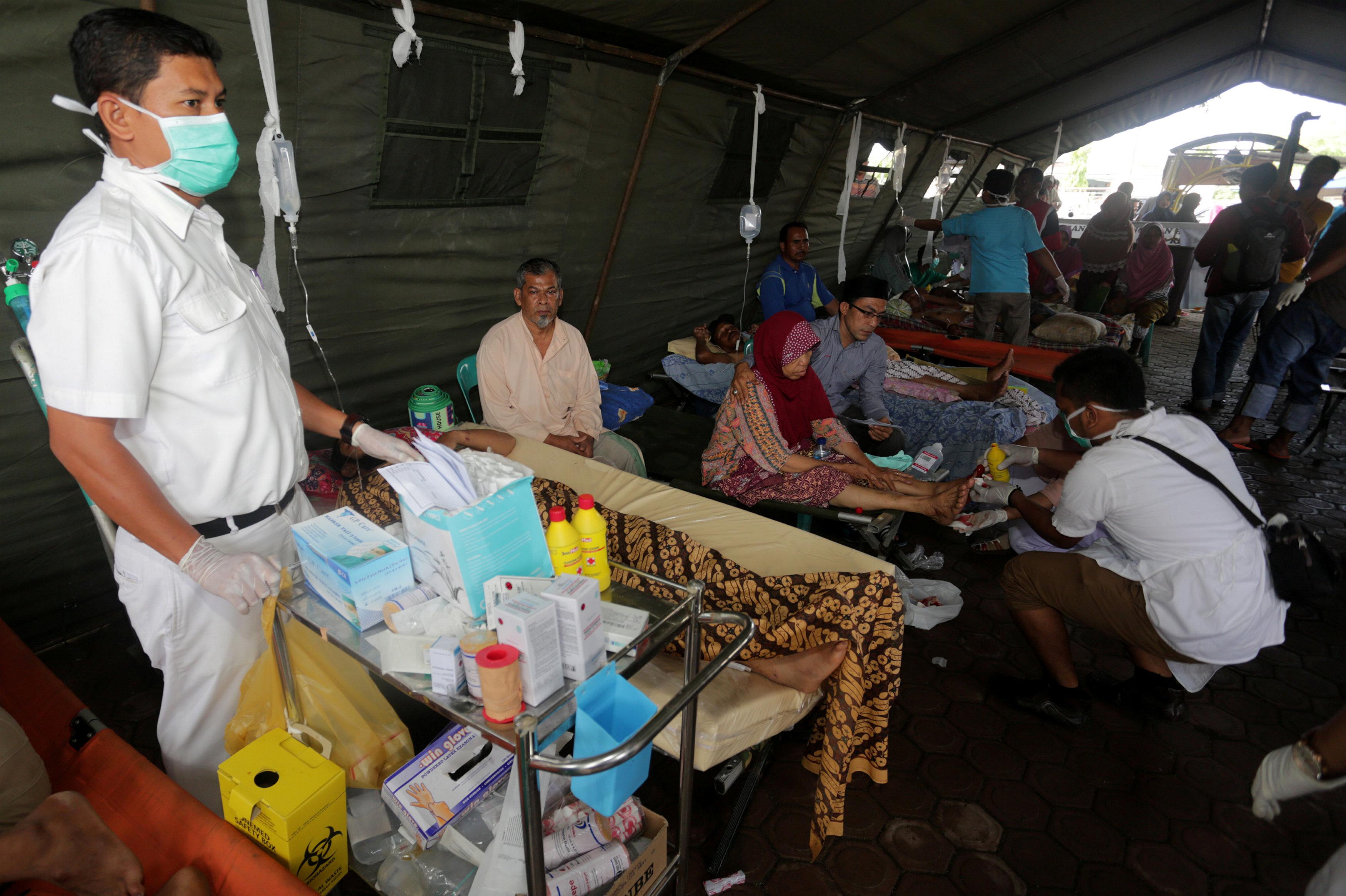 Injured people receive medical attention in an emergency tent at a hospital following an earthquake in Sigli, Pidie regency, in the northern province of Aceh, Indonesia December 7, 2016 in this photo taken by Antara Foto. Antara Foto/Irwansyah Putra/via REUTERS

“There aren’t enough medical staff,” the Red Crescent’s Muklis, who like many Indonesians uses one name, told TVOne.

Nugroho said more than 1,000 personnel, including military officers and volunteers, had been deployed to help in disaster relief. 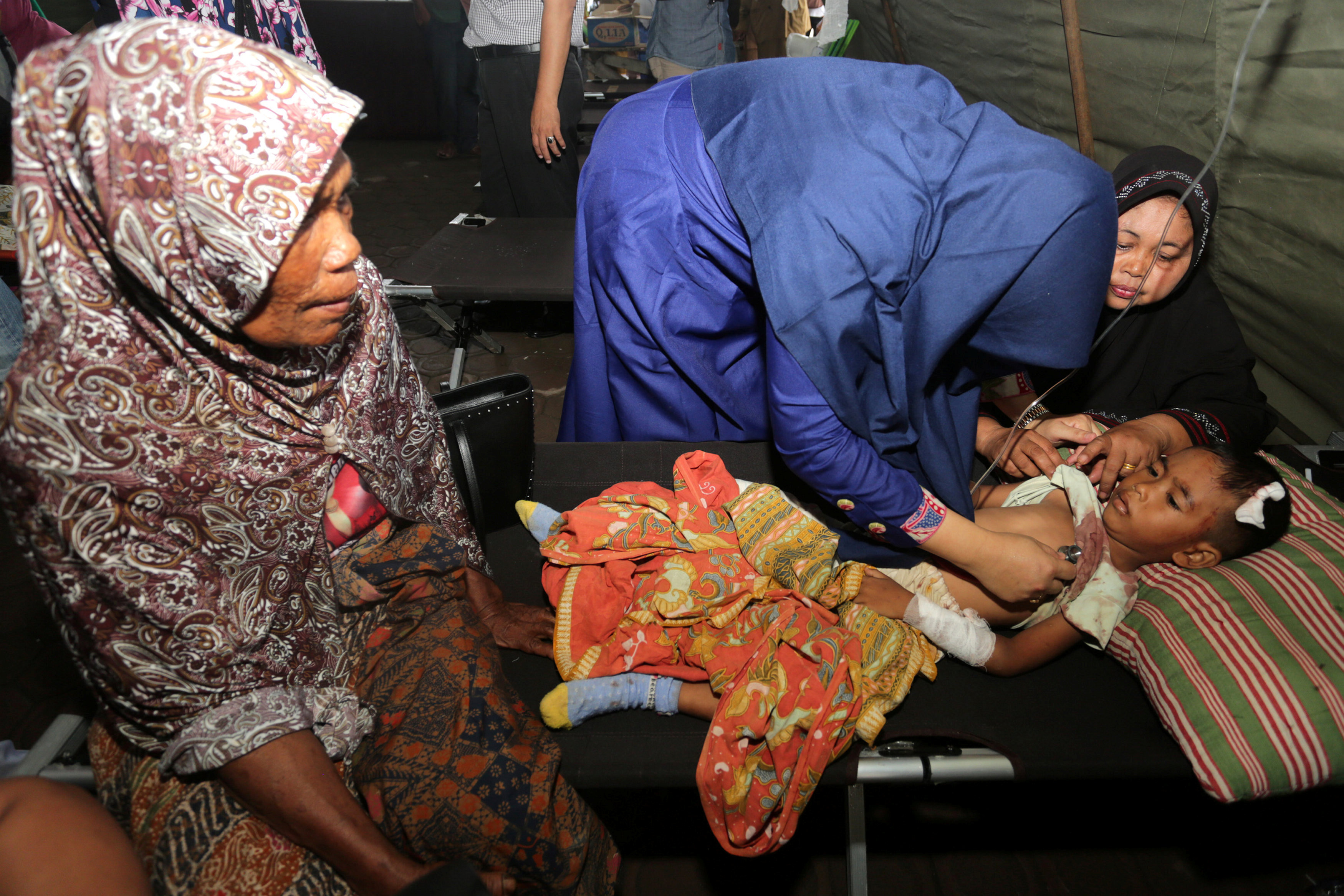 A medical officer checks the condition of an injured child at a hospital following an earthquake in Sigli, Pidie regency, in the northern province of Aceh, Indonesia December 7, 2016 in this photo taken by Antara Foto. Antara Foto/Irwansyah Putra/via REUTERS

At least five aftershocks were felt after the initial quake, the disaster management agency said.

The region suffered massive destruction in 2004 when a 9.2 magnitude quake triggered a tsunami that wiped out entire communities in Indonesia and other countries around the Indian Ocean.

Indonesia was the hardest hit, with more than 120,000 people killed in Aceh.